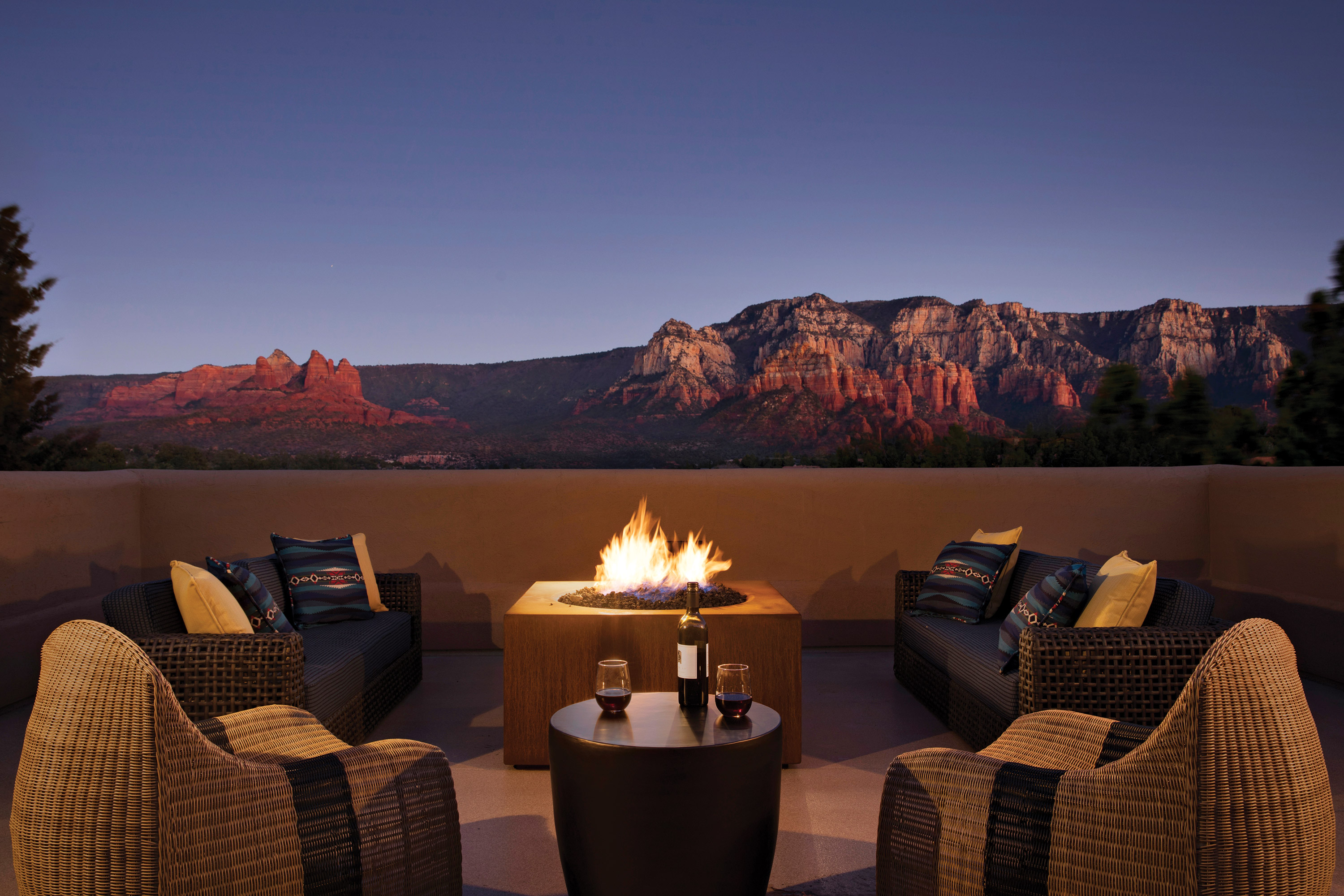 With a ton of hiking and mountain biking trails and New Age shops and art galleries galore, Sedona proudly touts itself as the ultimate day-trip destination for adventure-seeking Arizonans. And for food-loving Arizonans? Well, those bona fides have always been a bit more suspect in Red Rock Country. Fortunately, the past few years have seen a profound shift in Sedona’s culinary fortunes, with the success of revered eateries like Jeff Smedstad’s Elote Café and Lisa Dahl’s Mariposa Latin Inspired Grill, and a gaggle of more recent newcomers. From grab-and-go poke bowls to gourmet burgers to its first brewery in two decades, here is a comprehensive guide to Sedona’s newest gastronomical ventures.

With a restorative atmosphere and recently renovated rooms, this plush boutique hotel doesn’t remotely appear to be the Best Western it previously was. General manager Elizabeth McIntire says the renovations aimed to “upgrade, update and really make it more of a Sedona hotel.” This meant completely reworking the lobby to offer sweeping views of the surrounding red rocks and incorporating décor “inspired by the night sky.” In addition to cozy guest rooms featuring fireplaces, desert-influenced accents and private terraces with fire pits, Sky Rock provides myriad events to add to the experience. The hotel offers yoga classes, mountain biking excursions and spiritual exercises such as sound healing and aura photography.

“It isn’t just somewhere to stay,” McIntire says. “It’s somewhere where you can really experience Sedona from start to finish.”

Located just west of the iconic Sedona “Y,” next door to the aforementioned Mariposa, Sky Rock straddles two of Sedona’s vortexes – ancient energy centers that are said to heal and recharge – which add to Sky Rock’s mission of encouraging serenity and self-exploration. With close proximity to some of Sedona’s newest restaurants, Sky Rock is the perfect place to start your culinary expedition or take a post-meal power nap.

Sky Rock’s highly anticipated bar and restaurant opened in January, allowing guests and the public to stop in for light bites and local booze. Sky Rock Lounge only serves Arizona beer, wine and spirits and local fare. McIntire says they source many of their ingredients from the Sedona Community Farmers Market. The menu features everything from flatbread pizzas to panini and offers vegan and vegetarian options. “We want to keep it light, we want to keep it local and we want to keep it healthy,” McIntire says.

Opened in August 2018, Sedona Beer Co. is Sedona’s second brewery. (Oak Creek Brewing Co., which opened in 2001, was previously Sedona’s sole brewing company.) Sedona Beer Co. uses Sinagua Malt, which is grown and malted in Camp Verde and promotes river conservation. “There are only a few places in the world where you can live near your malt, and we just happened to be fortunate enough that this is happening right down the road from us,” says Sedona Beer Co. founder Kali Gajewski. “We’re showcasing a terroir in beer that not everyone gets the opportunity to create.”

Sustainability is a core practice of the brewery. Not only does it save water by buying barley from Sinagua, but it composts all beer waste and food scraps.

Gajewski says they typically have up to 12 brews on tap that range from a single-malt pale lager to a barrel-finished lemon and blueberry pale ale to a Saison featuring Arizona blue corn and four varieties of plum. Sedona Beer Co. accepts that beer isn’t for everyone, so it also offers house-made sodas with creative flavors like mango, pomegranate and sour apple. On the food menu, expect elevated, chef-driven delicacies like green chile pork sliders, sweet potato waffle fries and scratch-made sauces. “We end up being a place that people don’t just come for beer; they’ll come for lunch and not have beer,” Gajewski says. “Food, for me, was the bonus on top of the beer, but now it’s become its own thing.”

Community is also an important aspect of Sedona Beer Co. Gajewski has created a hub for locals and visitors alike, with pieces from Sedona artists adorning the walls and games like Jenga and cornhole for patrons to play. “I want it to be welcoming and warm,” she says.

Owner Dieter Lehmann claims to have the best burger in town. “It’s the end cuts of the New York strip and the filet cooked into hamburger meat,” he says.

Lehmann also keeps his kitchen open until 10 p.m., later than any other restaurant in notoriously sleepy Sedona. To that end, Steakhouse89 – which opened in March 2018 – has a robust cocktail program, serving signature drinks like the Head in the Clouds with Don Julio blanco tequila, agave, fresh-squeezed lime juice, Cointreau, Aperol-elderflower foam and Himalayan salt. Many of the restaurant’s cocktails use Wild Tonic kombucha. The Cottonwood-based beverage comes in large bottles, which the restaurant recycles and turns into candles stamped with the Steakhouse89 logo. 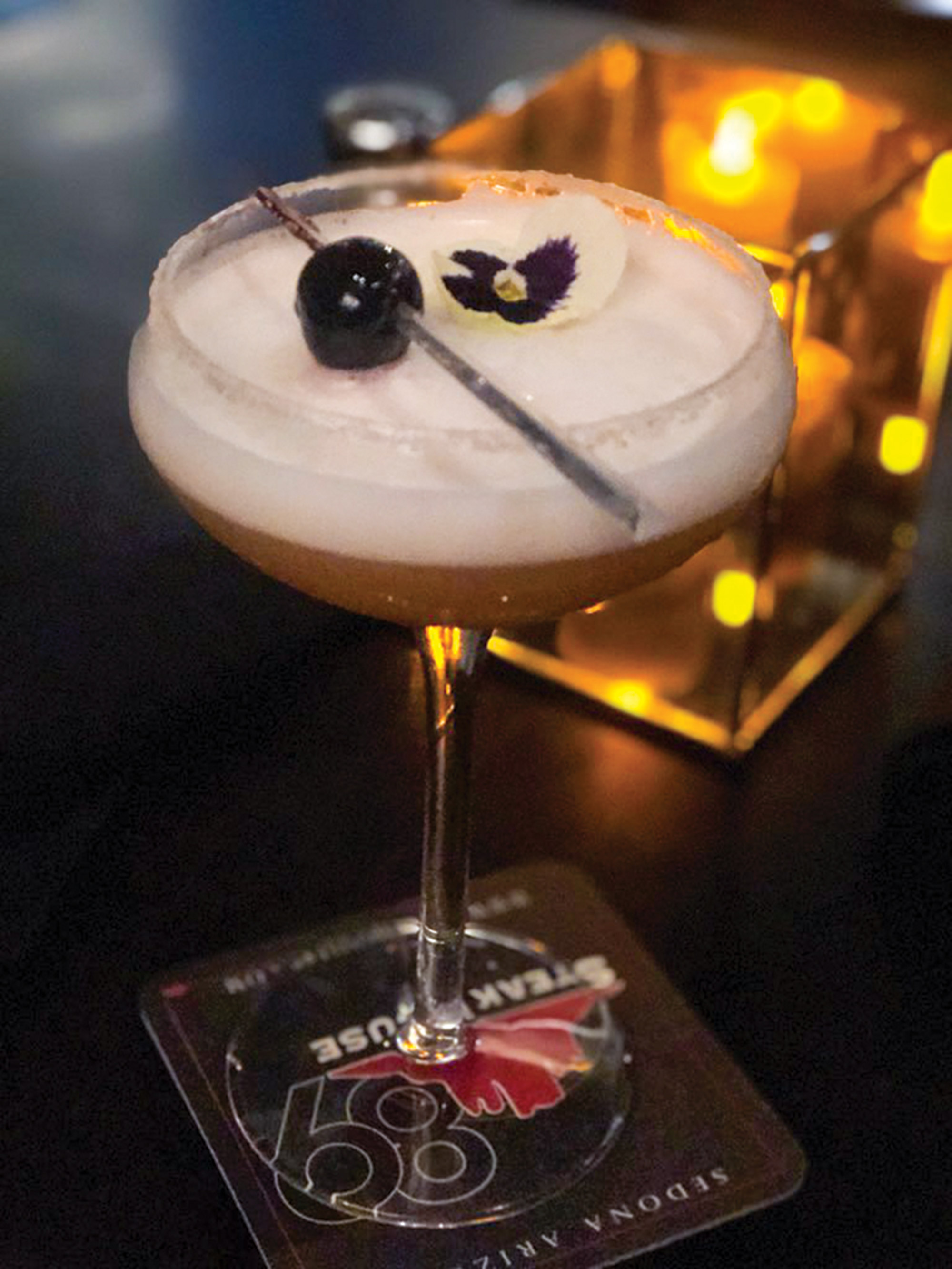 Lehmann believes change is good, so he switches up the menu every three months. “We keep what sells good, we get rid of what doesn’t sell so good and replace it with a new dish,” he says.

Seafood lovers will devour the diver sea scallops with pea risotto and black truffle vinaigrette, while carnivores can choose from an 8-ounce filet, New York Strip, chateaubriand or prime rib. Vegetarians can make a meal out of the steakhouse’s sides, which include a creamy macaroni and cheese dusted with Noble breadcrumbs, roasted Brussels sprouts with Brie and cranberries and grilled asparagus with toasted sesame seeds. Steakhouse89 boasts a wood-burning stove, which “cooks the steaks quicker, but keeps them juicier,” Lehmann says. 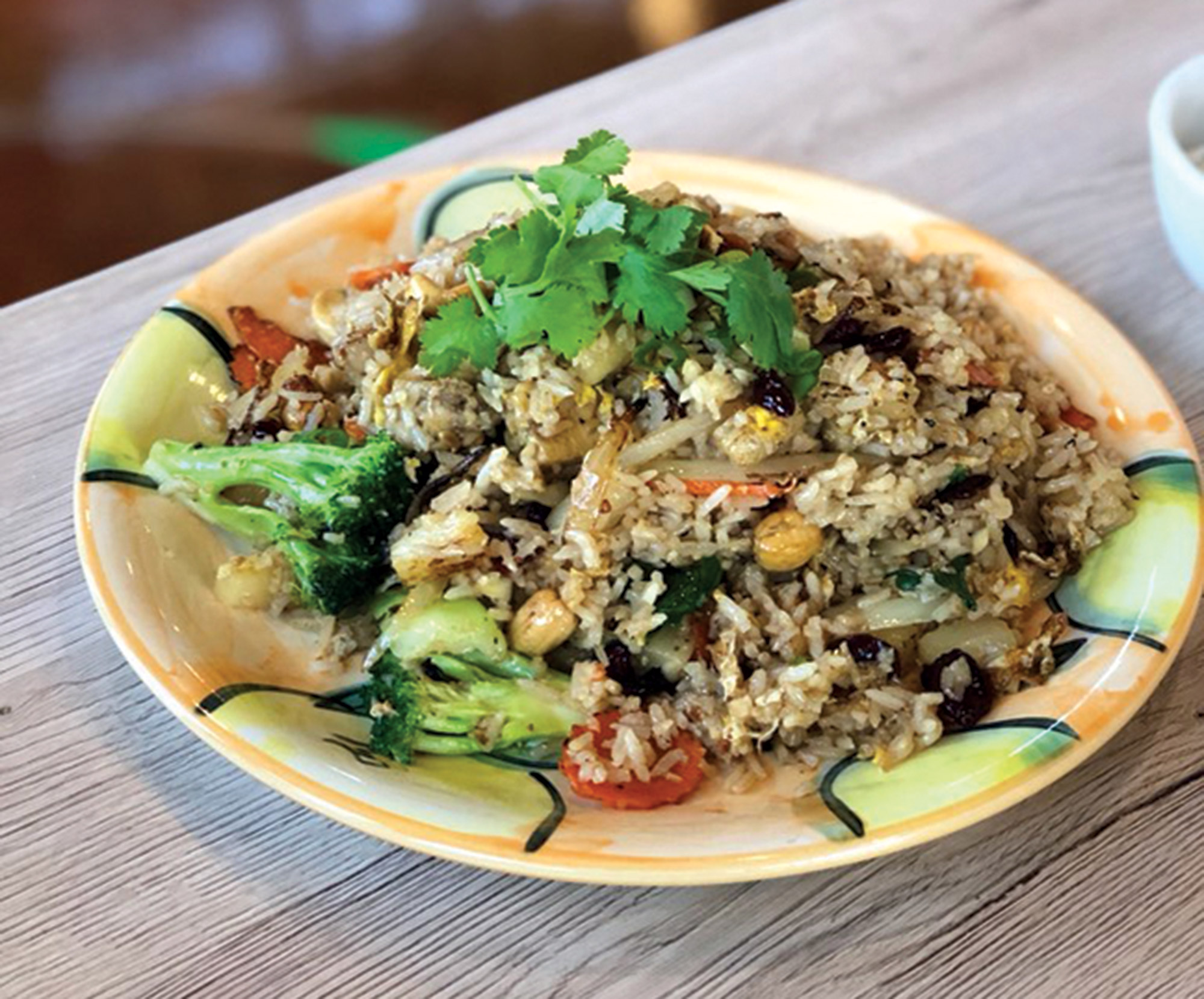 Having debuted last October, Fresh & Natural makes “good food that doesn’t make you feel like you have to take a nap afterward,” manager Max Fiori says.

Focusing on traditional Thai recipes with fresh ingredients, the fast-casual eatery also has a few twists like the Thai burger, grass-fed beef marinated in a medley of Thai sauces with sliced red onion, cilantro and lettuce.

Popular dishes include the pineapple fried rice with egg, onion, cranberry, pineapple, cashews and curry powder, and the lemongrass-garlic chicken served with steamed broccoli and carrots.

Poke – diced raw fish – seems to be popping up everywhere, but Sedona Poke Company owner Ryan Nichols has been eating it since he was a youngster living in the Aloha State. “I spent most of my childhood in Hawaii on the Big Island and spent a lot of time on the beach, [playing] volleyball, surfing [and] eating poke almost every day when we’d go to the beach, so it’s something I love,” he says. 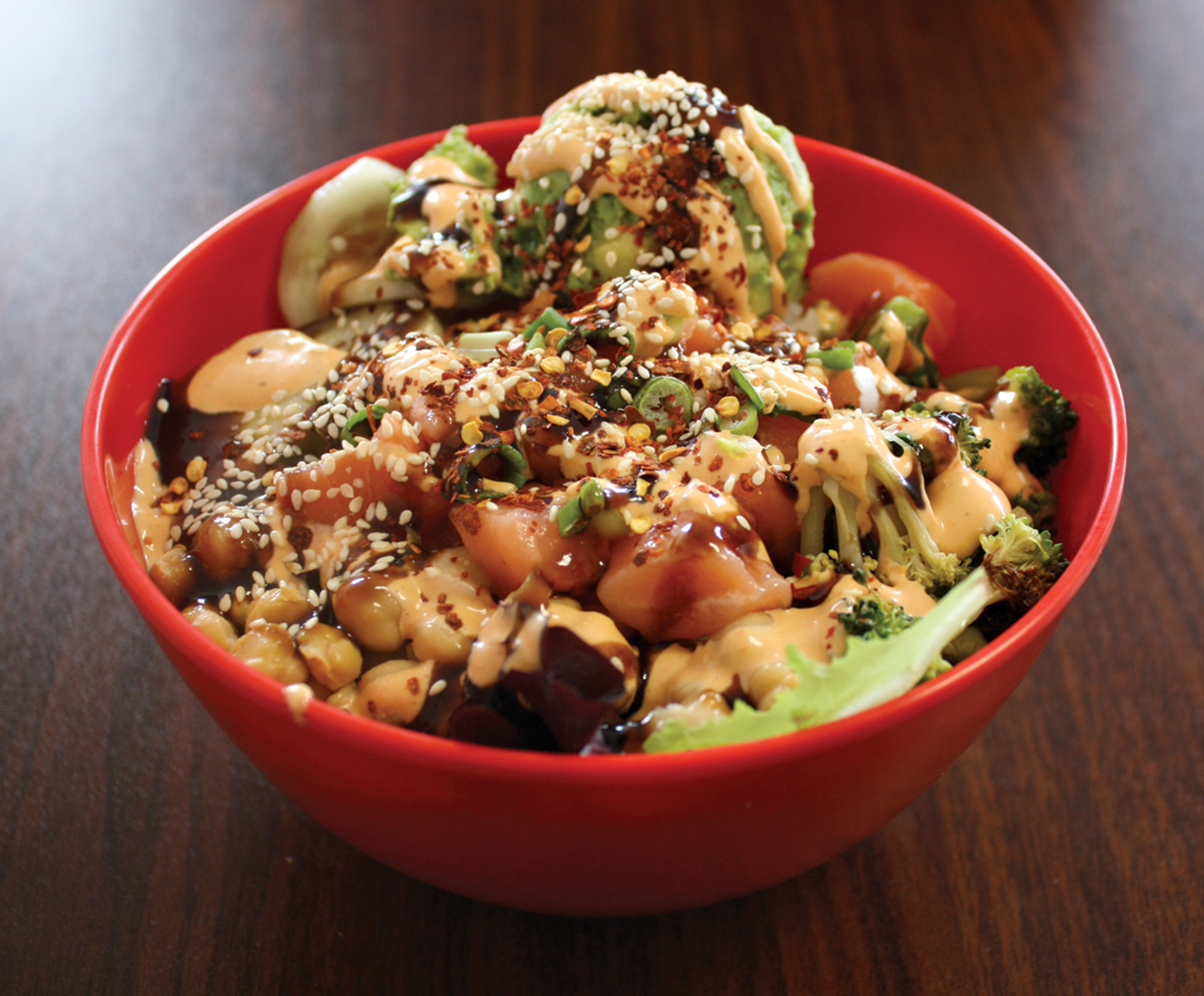 Sedona diners can now get a taste of Hawaii at Nichols’ new restaurant, which opened last year. The build-your-own bowl concept offers protein options like ahi, salmon, chicken and tofu with a slew of toppings that include avocado, kimchi, crab salad and cucumber. Patrons can then choose from house-made sauces such as wasabi aioli or sweet citrus and crown their bowl with crunchy add-ons like furikake and sesame seeds. The restaurant also offers a “vegan poke” made with golden beets. Each customizable bowl is a kaleidoscope of colors, flavors and textures, and is just as pretty as it is palate-pleasing. Recently, Sedona Poke Company started serving soups and a kalua pork sandwich that Nichols says is a local favorite.

The small shop has a comfortable, casual atmosphere that allows guests to sit down and savor their meal or take it to go. “I think the one thing that sets us apart is we’re not a sit-down restaurant and we’re not fast-food either, so we’re kind of in the middle because we have really high-quality stuff,” Nichols says. “In Sedona… there’s no quick, really good food, so this is a really good in-between.” 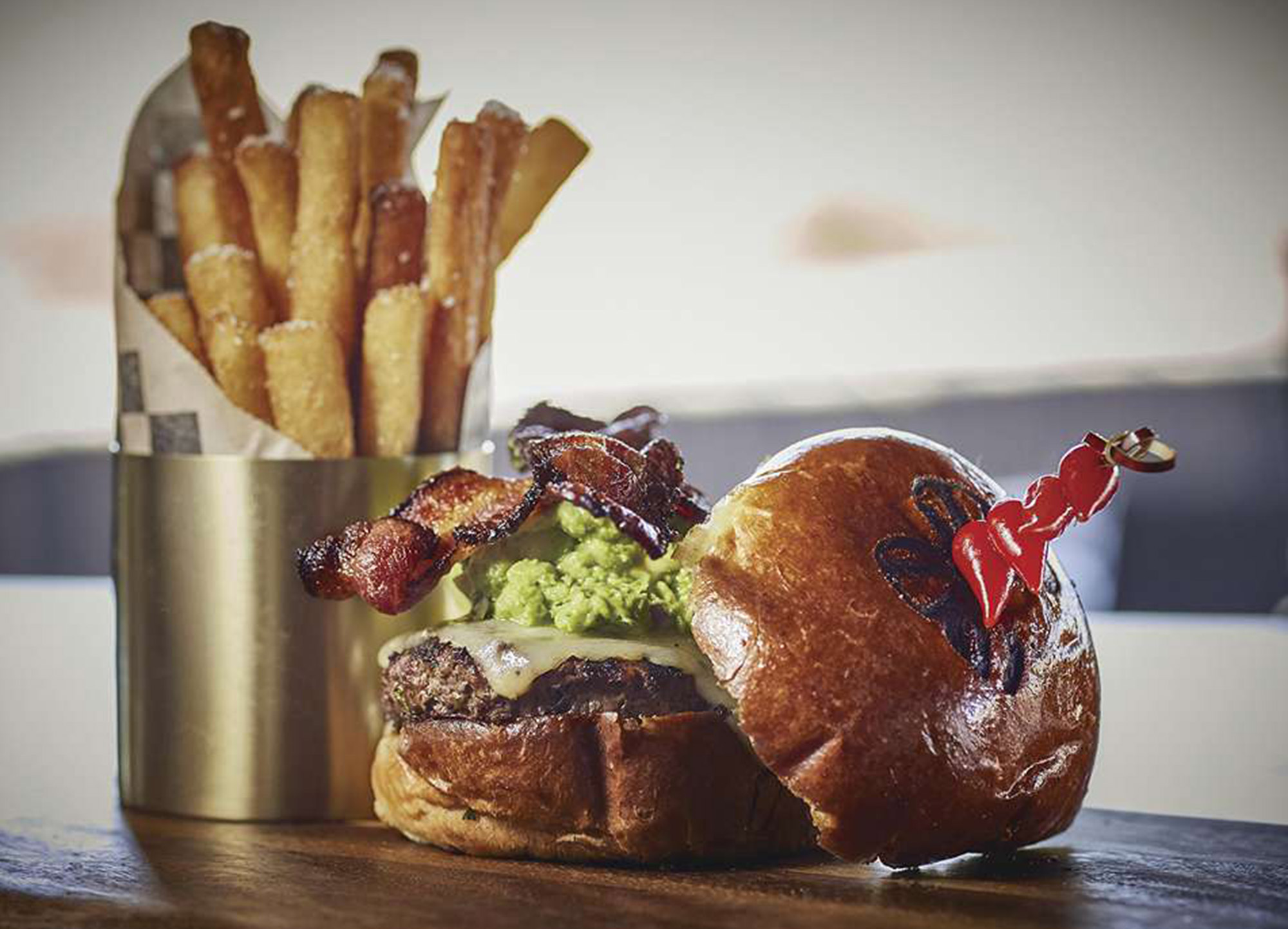 Clearly, chef Lisa Dahl’s restaurants are like her children. “Each one has a very distinctive reason to be, and they all have a wonderful personality,” she says.

The newest addition to her brood – which includes Dahl & DiLuca (her “eldest”), Cucina Rustica, Pisa Lisa and Mariposa – is this “couture burger lounge.” Opened in late 2019, it feels like a sleek Manhattan speakeasy instead of a strip mall storefront in Sedona. “It’s not just about the burger, it’s about that experience,” Dahl says.

Though the dining room is freckled with fine art, studded with leather accents and livened with jazz, the food is the real showpiece – a world tour of flavors, from Japanese-inspired burgers to robust salads (the atun parfait with yellowfin poke, avocado, mango relish and wasabi-ginger dressing is a revelation) to scrumptious yuca fries with pimentón aioli.

To start, try the crunchy street tots, smothered in queso fundido and sprinkled with pico de gallo and cotija cheese. Diners can choose from more than a dozen burgers, including vegan and vegetarian offerings that Dahl says “are every bit as good as the meat burgers,” along with grilled chicken and mahi mahi sandwiches. Of the nine signature cocktails, try the elegant Amethyst Ice, a beautiful rose-hued elixir made with house-infused butterfly pea flower gin. Save room for one of Dahl’s decadent milkshakes, each made with Madagascar vanilla gelato.

From the drinks to the décor to the bevy of burgers, Dahl’s newest addition to her family of restaurants might just be her favorite. Not that she’d admit it.

Burn off your meal on these new and lesser-known hiking trails. 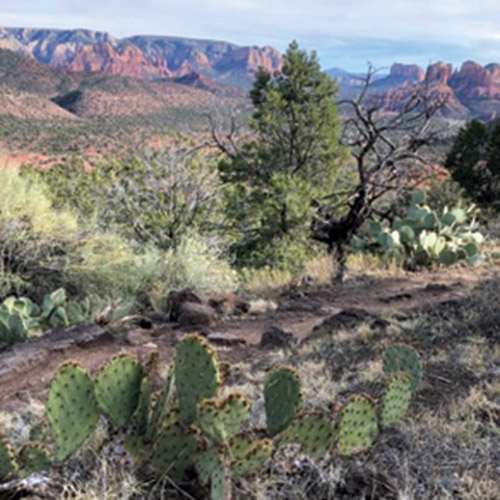 One of the newest additions to the Sedona trail system, Scorpion Trail is a sloping, 4-mile jaunt with commanding views of Cathedral Rock. The trailhead is hidden behind Sedona Red Rock High School – and don’t worry, the trail is named after the school’s mascot, not because of the likelihood of stumbling upon the venomous arachnid. 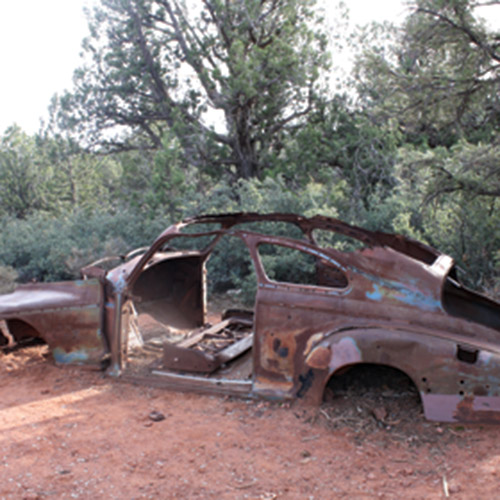 This 9.8-mile loop was recently rerouted with sweeping sections of new trail that provide stunning red rock views. To find the trail, take S.R. 89A to Cultural Park Place and park at the Cultural Park Trailhead. An old, rusted truck around the 1-mile mark makes for a great photo op. 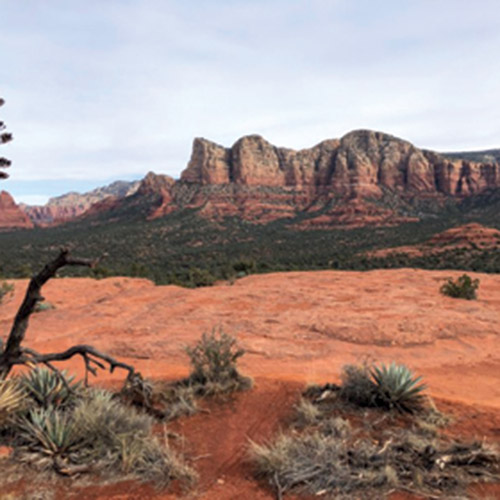 A brief trek offers panoramic views of Courthouse Butte and Bell Rock without the crowds. One of Sedona’s best-kept secrets, the trail connects with several longer paths that provide higher vantage points. Located off Highway 179 past the Village of Oak Creek.