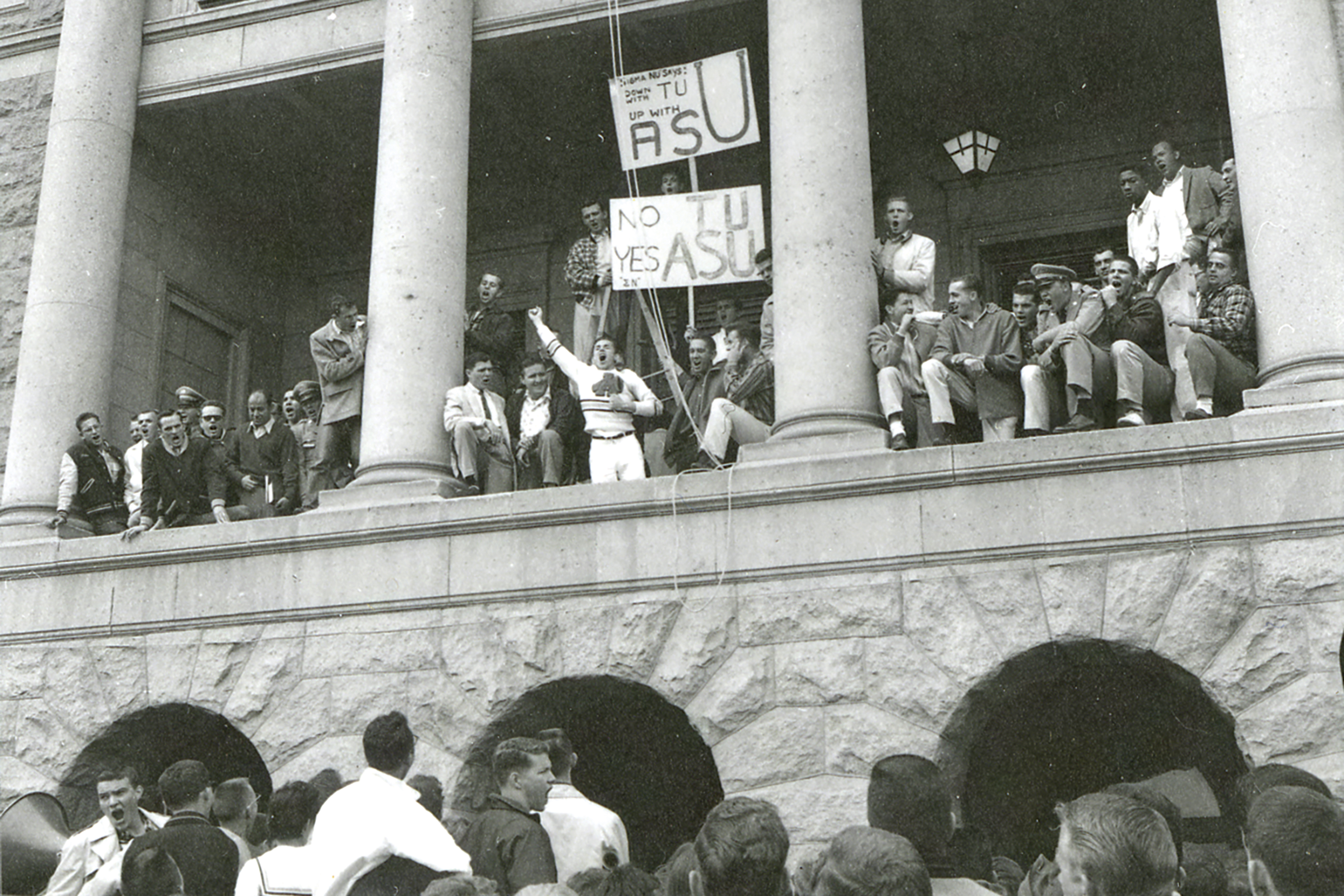 Elevating a humble state college in Tempe to university status – and creating the educational juggernaut we know today – ended a decades-long battle with a certain “old pueblo” to the south.

In the fierce, homegrown rivalry between Arizona State University and University of Arizona, it’s OK to run up the score when one school isn’t playing fair. And the Sun Devils did just that in 1958, trouncing their in-state opponents by an incredible tally of 151,135 to 78,699. The competition didn’t involve sports, but a statewide ballot count for an initiative to upgrade the Tempe school to a university and to certify that the two institutions were equals.

Arizona State College, as it was then known, had unsuccessfully lobbied the Legislature to be recognized as a university after World War II. “The people who opposed the change were from that school in Tucson, otherwise known as Nogales Tech,” Ed Richards, ASU class of 1960, says. The stalemate forced the Sun Devils to bypass politicos and take the issue directly to voters, and the campaign’s eventual success served to underscore the Valley’s political dominance over Tucson.

This clash of higher education interests had its origins in the 13th Arizona Territorial Legislature of 1885 – a seminal meeting of state-builders in which Phoenix fared poorly. “The three big-ticket appropriations [that year] were back-room deals made to locate the university in Tucson, the insane asylum in Phoenix and the Normal School in Tempe,” ASU archivist Rob Spindler says. Founded to train educators, the Normal School was renamed Tempe State Teachers College in 1925, and Arizona State Teachers College in 1929. Attempts to grant non-education degrees, however, were stymied by Pima County legislators, who claimed the institution would provide inferior instruction. 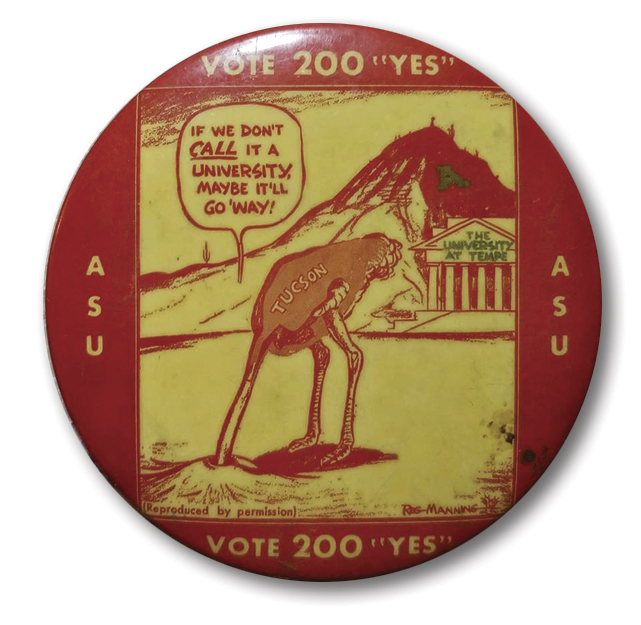 Under the leadership of Dr. Grady Gammage, the Tempe school again sought to expand its opportunities for the numerous veterans enrolling after World War II. The Arizona Legislature and board of regents gave the approval to grant some non-education degrees and changed its name to Arizona State College in 1945. Although the college was essentially operating as a university, Wildcat-affiliated politicians blocked attempts to upgrade its status. (Official university designation would let the college offer a greater variety of undergraduate programs including those leading to a master’s degree or a doctorate.)

The Sun Devils’ quest was aided by Eugene C. Pulliam, publisher of The Arizona Republic, who began referring to the institution as Arizona State University in his paper in early 1958. Pulliam, however, was forced several months later to shorten it to Arizona State, after complaints from Tucson subscribers and UA alumni.

To mediate, Senator Harold Giss of Yuma introduced a bill to rename the school Tempe University. Praise came from the Old Pueblo. “[This] would forestall the thing Tucson has most to fear, which is the theft of the great name of the University of Arizona, established through decades of scholastic and research glory,” declared an editorial in the Arizona Daily Star.

Valley residents were less enamored. Rep. Lillian Retzloff of Maricopa countered with a proposed bill to change the name of UA to Tucson University. “We might as well be consistent,” she said.

Giss’ bill inspired more than 2,000 Sun Devils to storm the state Capitol. Some occupied the legislative chambers and hung an effigy of Giss. Others chose a more organic statement. “We commandeered push lawn mowers from the yard maintenance staff without much resistance,” says Jerry Harris, president of Alpha Epsilon Pi fraternity. “We then proceeded to cut ‘ASU’ in a conspicuous portion of the Capitol grounds.”

The Sun Devils started an initiative for the November election to rename their school ASU. The petition required 28,500 signatures. Students collected almost 65,000, “delivered… to the Capitol in an armored car accompanied by armed guards,” says Marshall Trimble, Arizona’s state historian. “They wanted to make certain those Wildcats wouldn’t try and ambush them.” 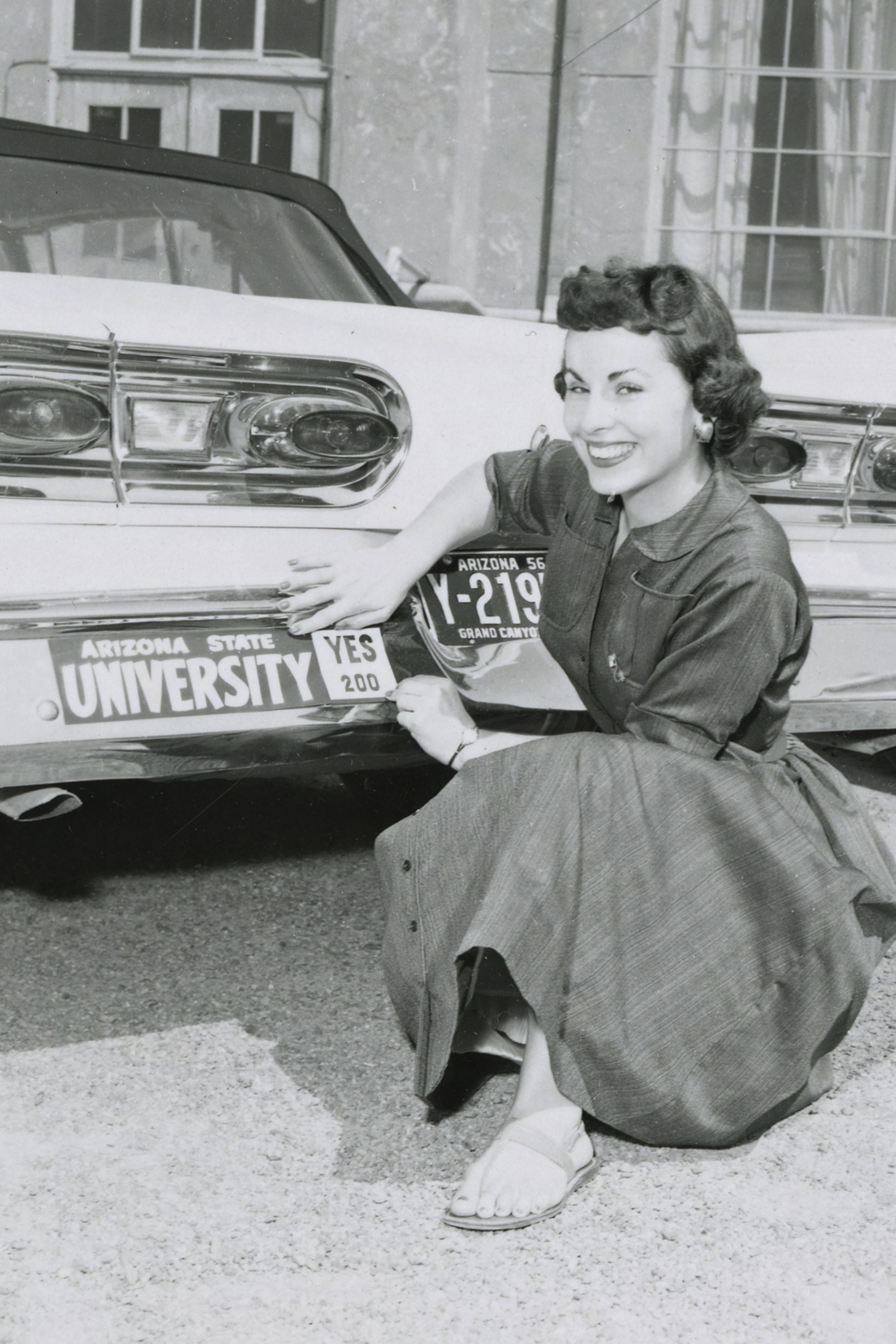 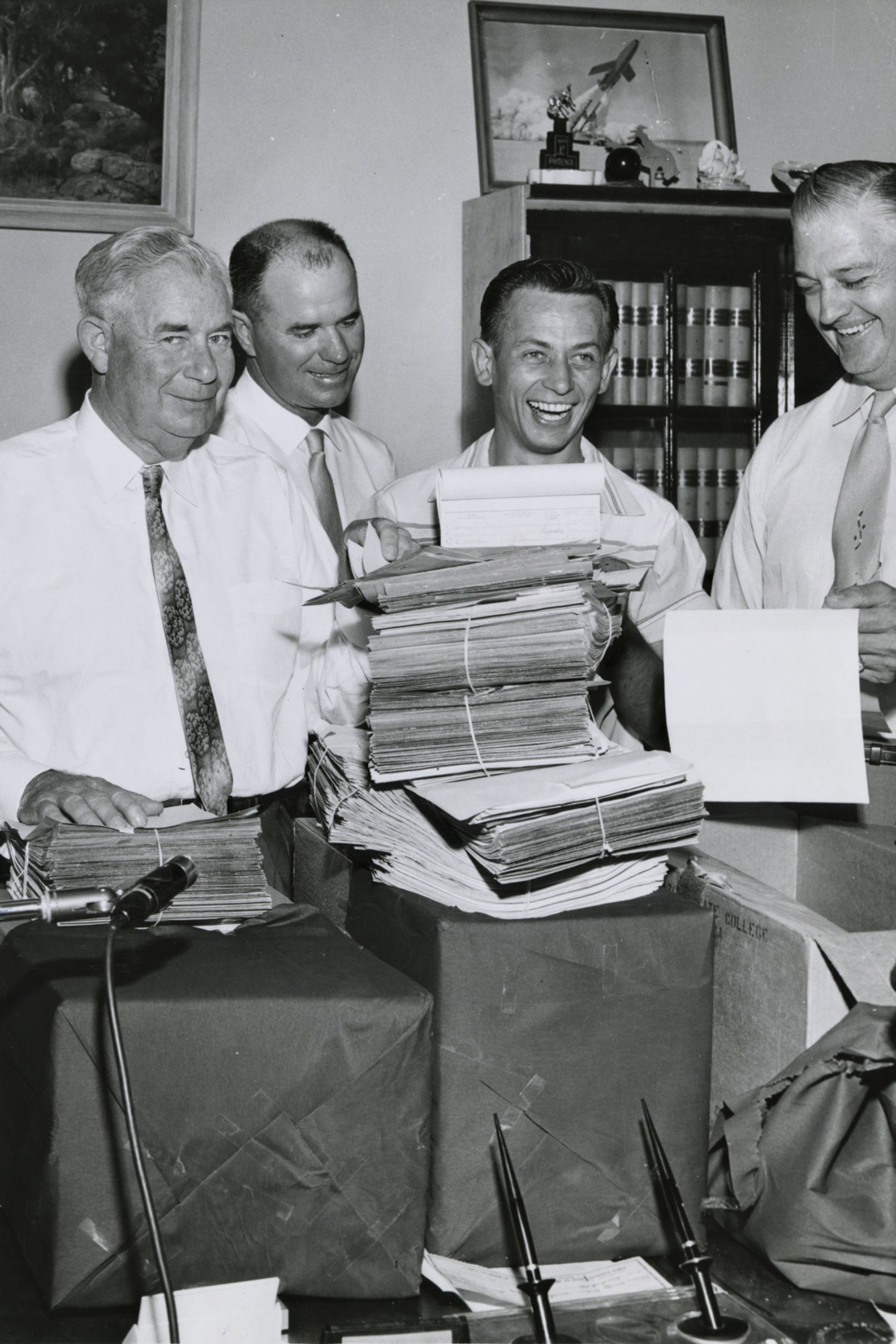 Tucson campaigned against what became Proposition 200, citing name confusion, duplication and higher taxes. But supporters had an effective strategy that included TV commercials featuring talk-show host Steve Allen, who had attended the school. The Sun Devils also launched Operation Airlift, a Piper airplane with “Vote 200 Yes” painted on its wings and fuselage.

“I don’t recall any animosity, but rather good-spirited behavior by people on both sides of the issue,” Dick Godbehere, ASU class of 1962, says. Hijinks included burning “No 200” onto the turf at the 50-yard line at Sun Devil Stadium.

Election night was fraught. “The early returns had ASU losing badly,” Harris says. “We found out later these first ballots were from Pima County, and when Maricopa County results were tallied, we won in a landslide!” Only Cochise, Pima and Santa Cruz counties voted against the initiative.

It was the first time in American history that a university had been named in such a manner, according to Trimble. “There had always been an ‘A’ on the mountain in Tempe, and on the night of the vote, students went up and added an ‘S’ and ‘U.’”

“Those Nogales Tech supporters just had to suck it up,” Godbehere says.

In addition to the ASU Tempe campus with its 50,000 students, the university has four other campuses in Arizona:

ASU West campus opened in Northwest Phoenix in 1984 and now offers about 100 degree programs. Around 3,500 students attend classes in the campus’s Oxford University-inspired architecture. A solar array provides most of the power for the school. 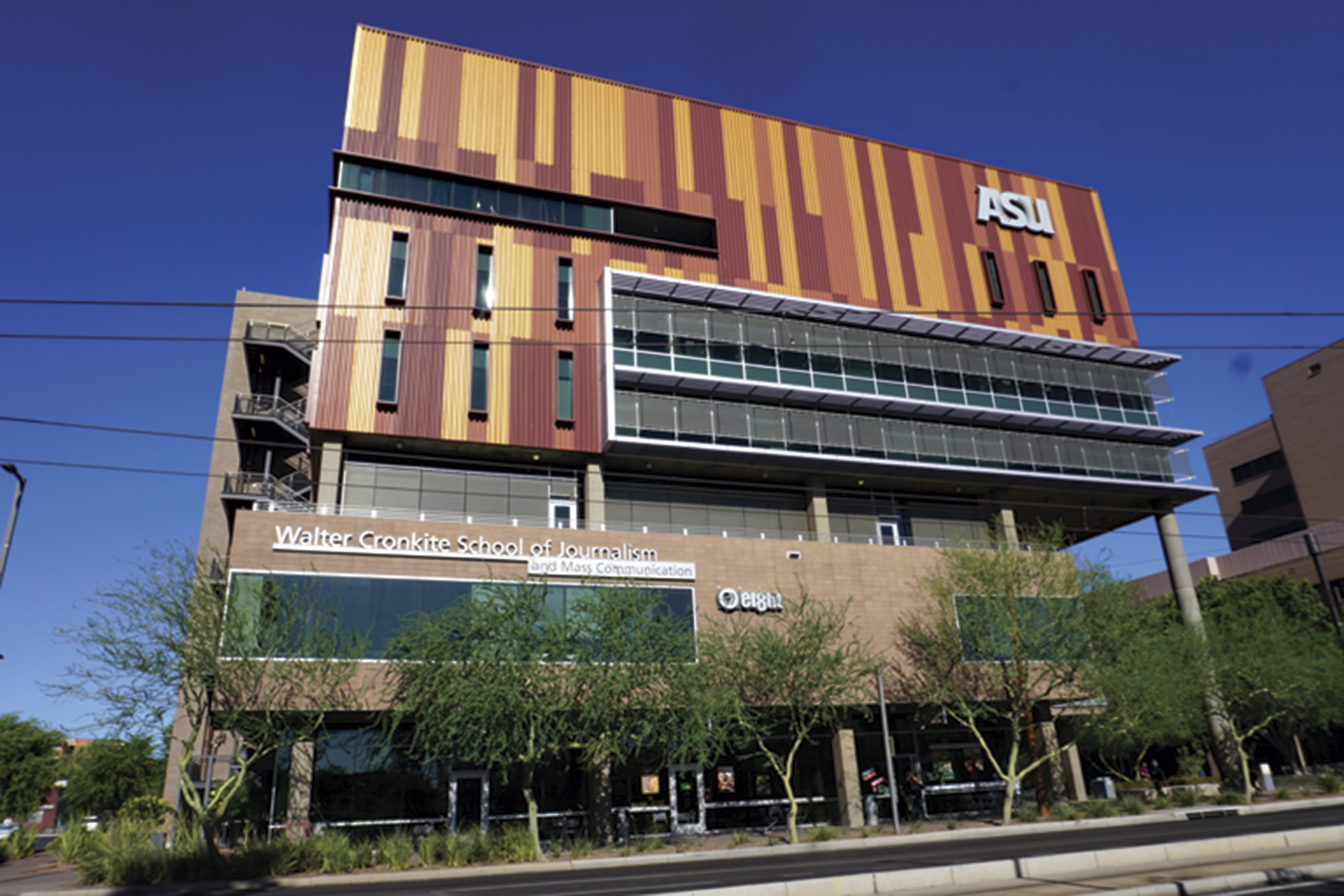 ASU Polytechnic campus was launched in 1996 at the decommissioned Williams Air Force Base in southeast Mesa. Initially called “ASU East,” the campus focuses on science and technical programs and serves around 4,000 students who pursue more than 130 degrees.

ASU@Lake Havasu campus started in a former middle school in 2012 and focuses on undergraduate education. The campus has an enrollment of about 150 students and a low student-to-faculty ratio.

ASU Downtown Phoenix campus began in 2006 and focuses on health care, law and journalism education, serving more than 11,000 students. The campus is composed of new buildings and repurposed structures.