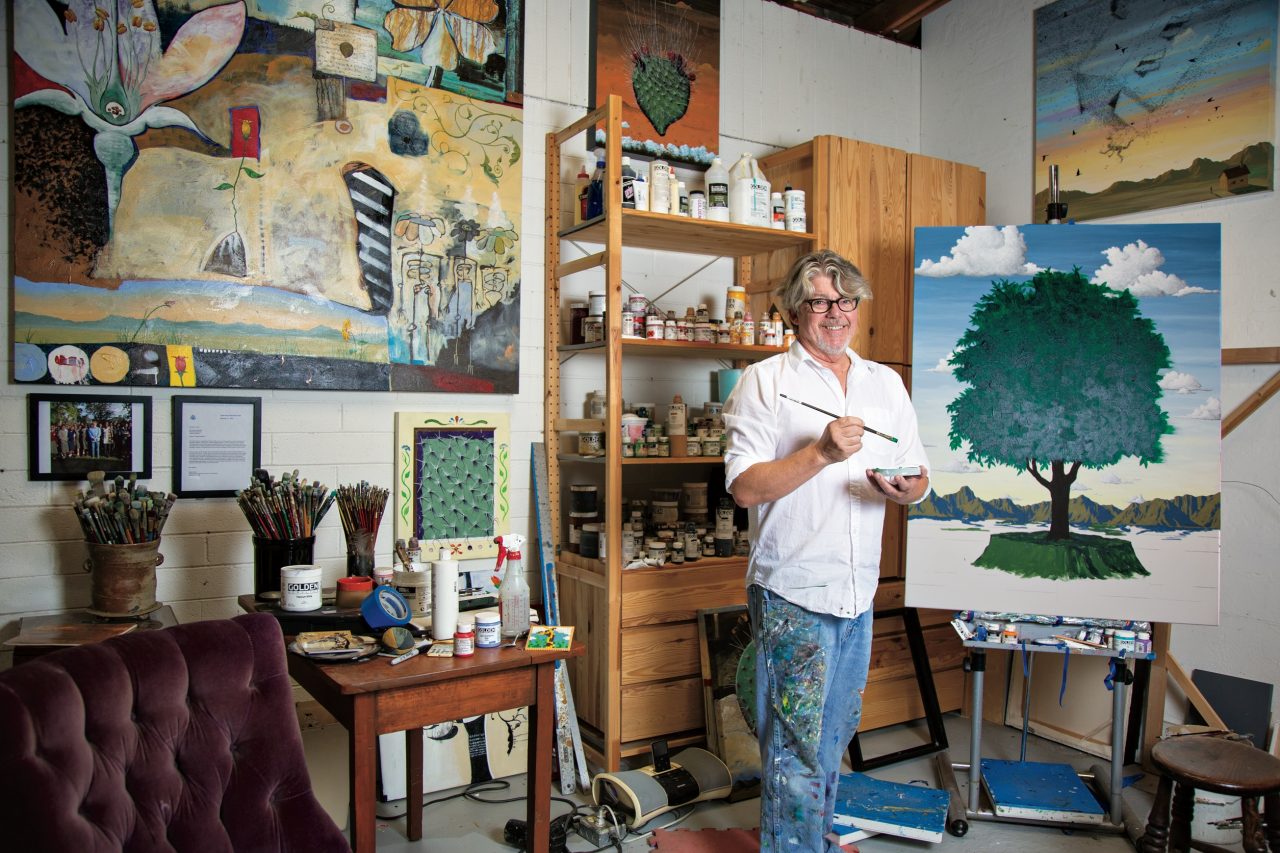 Timothy Chapman paints wild, imaginative renderings of animals. He favors zebras that fly or giraffes with leathercraft designs rather than spot patterns. Lately, he’s been into birds (ravens and magpies, in particular), painting them like illustrations in an abstract biology textbook. He adds mountains he grew up near, like Camelback Mountain, on the canvas.

The second-generation Arizonan, a Scottsdale-based artist who works out of the Cattletrack Arts Compound, calls his work “invented natural history.”

“I like the weirdness of biology and thought I’d find a job as a biologist,” he says. “I didn’t become a printmaker because I didn’t have a press.” So he became a painter, one who shows up to the studio with messy gray hair and blue jeans smudged with different colors of acrylic paint on his thighs.

“I’ve always done art, and it wasn’t going to go away… Remember those old mimeograph handouts they’d give you in kindergarten or preschool to color?” Chapman says. “My mom told me I’d flip mine over and draw my own thing. The teacher asked, ‘Why?’ She told me I said, ‘Well, someone already drew on the back.’”

DESK, STOOL & CHAIR
Chapman’s father, who was an art collector and dealer, left him this furniture. The desk also comes with him to shows.

COASTER
This beaded coaster reminds him of his youngest teenage son, who made it in elementary school. “Honestly, I just love the thing!” Like father, like sons, he says – both boys are artistic. “We’re always sharing and comparing notes.”

KENYA EPHEMERA
On the wall is a photograph of the students he visited in Nairobi, Kenya, in 2014 for the Art in Embassies program. “That was a proud moment.” He also has a thank-you letter from the U.S. Department of State.

SKETCHBOOK
It is filled with notes, to-do lists and ideas for future works. Before reaching for paints – he prefers Golden brand – Chapman says he outlines his imaginings on the canvas in soft, easy-to-erase charcoal.