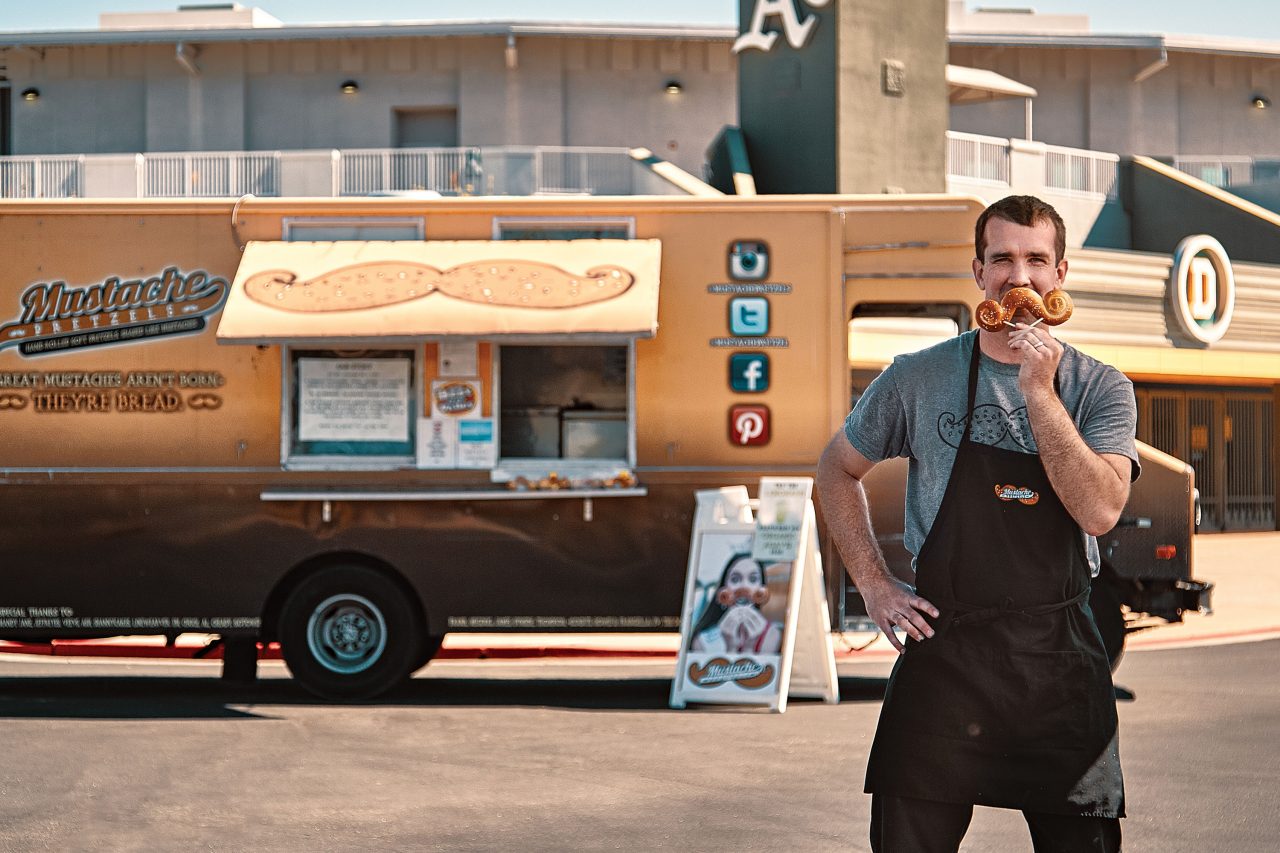 Working as a forensic accountant in Philadelphia, Greg Golden was usually ruining somebody’s day by uncovering tax fraud, embezzlement or fraudulent insurance claims. While he felt it was important work, he wasn’t always “super excited to do it.” In 2014, when his wife’s job transfer landed the couple in Phoenix, Golden traded spreadsheets for a used food truck and hit the streets selling freshly baked, mustache-shaped pretzels. Five years later, Golden operates two trucks, a kiosk at the Phoenix Convention Center and occasional pop-ups, and recently launched a brick-and-mortar store in Terminal 3 at Phoenix Sky Harbor International Airport. His business slogan? “Great mustaches aren’t born, they’re bread.”

I grew up an extremely picky eater in the Philly area, and pretzels are kind of everywhere there, so I lived on pretzels for a good stretch. And the mustache thing – my wife, Amanda, and I were in a business class in college and we had to do a project where we pitched a fake small business and business plan. A snowstorm hit while we were working on it and we had a few drinks in the middle of the day, and I got the idea: Wouldn’t it be funny if we sold pretzels shaped like mustaches? We didn’t end up using it.

I was doing accounting on the side when we first started because I needed money coming in. I really wanted to build the pretzel business, so I quit the accounting thing and within days I had to replace the truck engine and transmission. That left us with 57 cents and the money in the cash box. I literally had to buy gas on the way to an event and buy it again on the way home because I didn’t have enough money.

What have you learned?

How to maintain a generator and how to rewire plugs. If you show up to an event and the plug to the oven’s not working and you can’t fix it, you can’t make pretzels that day. With a food truck it’s all about keeping everything running. It’s the same kind of challenges that any business would run into, only mobile.

How many flavors do you have?

We have four main flavors – original, cinnamon sugar, garlic Parmesan and The Nutstache, which is salted caramel with fresh nuts. The pretzels are rolled by hand and the dough is always made from scratch, baked fresh on-site and served within a half-hour.

What’s the oddest combo a customer has requested?

You get people who have really interesting ideas about what to order, like cinnamon sugar with green chile queso. Every now and then we get ideas that are great. One of our regulars in the East Valley wanted a cinnamon-sugar Nutstache, so we fired it up.

I love our pretzels, but at the end of a long day you need a burger or quesadilla… I always love to trade with The Maine Lobster Lady. From a food cost standpoint, it’s hilarious, and bartering is a huge part of what we do.

I got to serve pretzels to Will Ferrell and Tim Tebow. Will Ferrell did a bit where he played all nine positions… for nine different teams in one day. He started here [at Hohokam Stadium] and I offered him a pretzel and he said, “No thanks, I’ve already had six.”