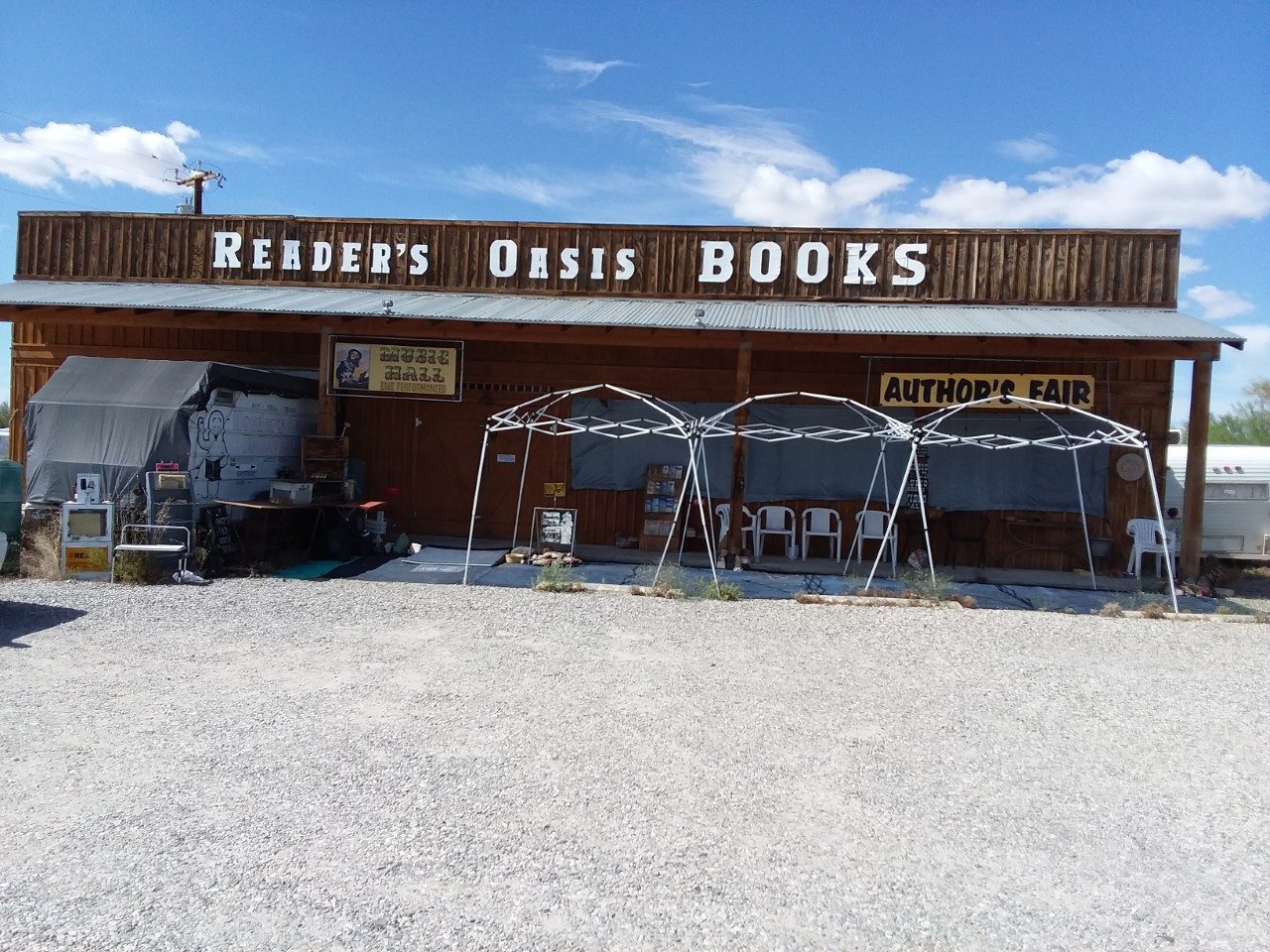 For some time, I had been planning to visit Reader’s Oasis Books in Quartzsite, sometimes known to travelers along the I-10 between Phoenix and L.A. as the“Naked Bookstore.” The reason for this moniker wasn’t because the stock included Naked Lunch or Naked Came the Stranger — though it probably has, at one point or another — but because the proprietor, Paul Winer, often minded the store naked.

Well, almost naked, anyway. The attire on his scrawny frame usually consisted of a single strategically placed sock covering his naughty bits, maybe a straw hat, a necklace and sandals. In this attire, he not only managed Reader’s Oasis, but he also performed blues piano in the style of his idol, Fats Domino, under the stage name “Sweet Pie.”

So on my way to California this past Thursday, shortly after noon, I finally pulled off at Exit 19 in Quartzsite and turned into Reader’s Oasis Books. The parking lot was empty, and there was a padlock on the door. There was also a handwritten cardboard sign from Winer’s wife, Joanne, apologizing for the inconvenience and saying that the store’s hours would be uncertain for a while because her husband was in long-term care in Yuma. There was a number to call, however, to ask when the place would next be open.

So I called. Joanne answered. I asked if the store would be open anytime soon, and she said not that day. She was still in Yuma, she explained, where her husband, who had been struggling with cancer for a while, had died two days earlier at the age of 75.

I apologized profusely for disturbing her, offered condolences and headed on down the I-10. But I spent the next day or two feeling curiously rattled. I grieved over the loss of a person I had never met.

Later, through articles on parkerlive.com and the Brattleboro (VT) Reformer, I was able to learn a bit more about him. Though he initially preferred being naked not because he was an exhibitionist but simply because he found clothes uncomfortable, the Vermonter did incorporate nudity into his music act. He claimed that it was he and the ACLU, which won the federal free speech case that Lenny Bruce lost, who had paved the way for male stripper acts like the Chippendales.

Marriage and fatherhood settled Winer down in Quartzsite, where he spent most of the last three decades gradually turning into a beloved roadside attraction. He was preceded in death by his daughter, Celia, in 1995.

A quick stop on the return trip Saturday afternoon found Reader’s Oasis still padlocked. If you plan a visit in the next few weeks, a call ahead would likely be a good idea. And while it’s advice that we’ve all heard (and very few of us follow as well as we should), I’ll repeat it here: If there’s anything you want to do or anybody you want to meet, don’t put it off.