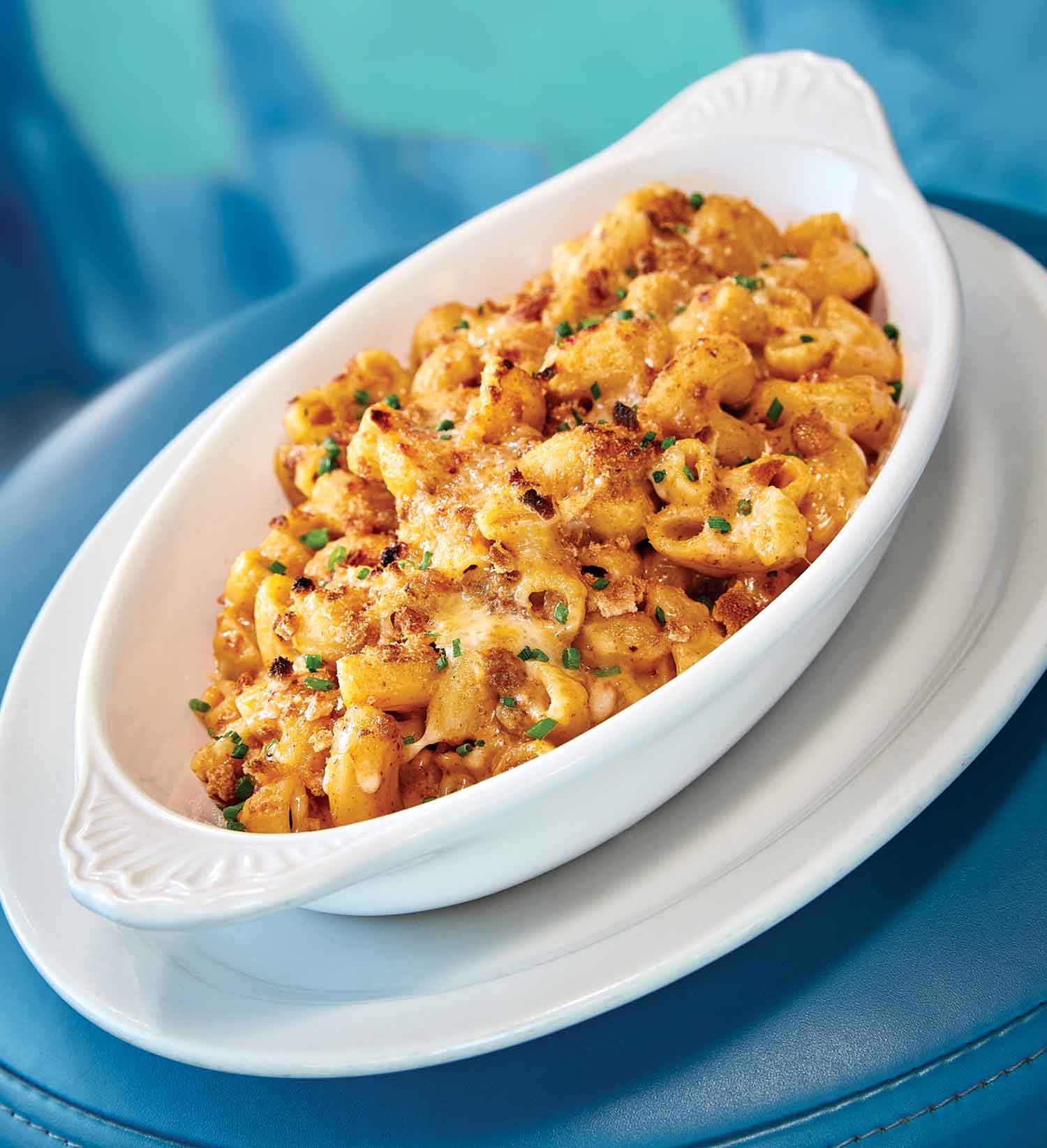 I remember a conversation I had in the late ’90s with a chef who fancied himself the Nostradamus of food trends. “Comfort food is over and done,” he said emphatically.

“Are you smoking crack?” I asked, not purely rhetorically. “Comfort food will never go out of style.” Twenty years later, as I dig into crazy-good meatloaf and dreamy mac and cheese at the new, second-edition Welcome Diner, built from the ground up at Pierce and 10th streets in the Garfield neighborhood, I feel vindicated. Clearly, American comfort food is here to stay, a staple at diners and family restaurants and an increasingly popular option for upscale operations as well, where classically trained chefs turn out classy, reimagined iterations of old standards – this according to a 2017 article in Restaurant Business that confirms my day-to-day observation.

Like the original Welcome Diner on Roosevelt Street, which chef-owner Michael Babcock and his partner Sloane McFarland shuttered last May, this one turns out modestly priced, generously portioned dishes from a down-to-earth yet sophisticated menu rooted in Southern and Cajun cooking traditions. Welcome ascribes to the farm-to-table creed, slings complicated cocktails and make its own potent ginger beer. It’s a small diner with big aspirations. The original was such a success that Babcock and McFarland opened a second location in Tucson in 2016, and now they’re playing to a packed room at this bright, white, midcentury shoebox of a building trimmed in pink and blue neon, so popular in its first month that lines form for takeout shortly after the doors open at 5 p.m.

The good news for longtime WD fans: Babcock’s menu is loaded with old favorites such as the grilled cheese, the fried green tomato sandwich and the signature Big Jim, a precariously tall stack of crispy fried chicken, bacon and melted cheddar tucked between two buttermilk biscuit halves, a dollop of pepper-speckled cream gravy oozing over the sides. The golden brown biscuits are flawless, flaky outside, dense but fluffy within. Surely they could be used in other deliciously Southern ways – smeared with pimiento cheese and stacked with salty ham, for example. 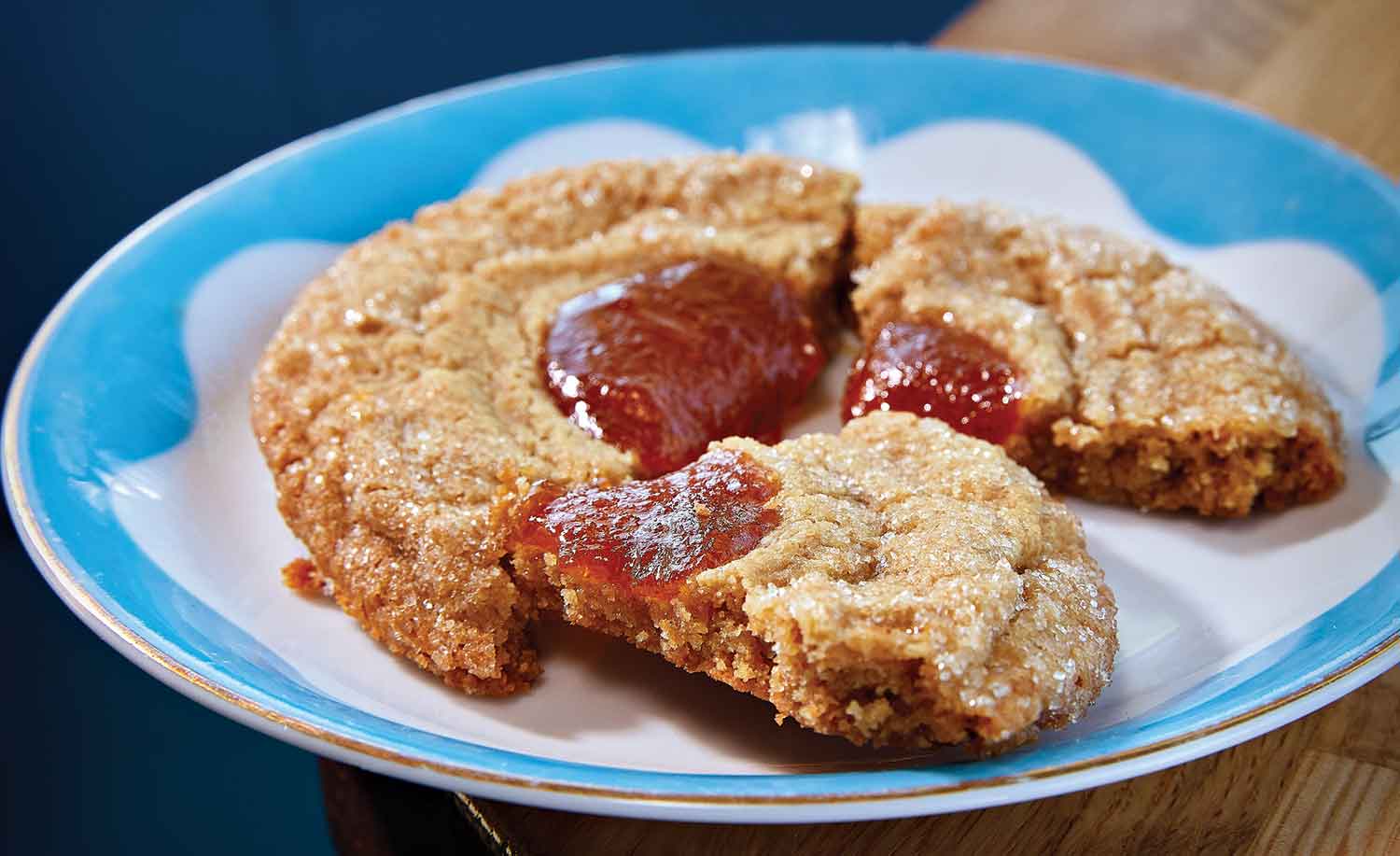 Stewed okra and tomatoes may be a classic Southern side, but Welcome transforms the dish into something even an okra-hater could love. Small okra spears, roasted until they’re nearly black, sit atop cubed, crisp-fried Brabant potatoes (a New Orleans specialty) and smoked tomatoes chopped and swimming in their own warmed juices with a dash of soy to give them umami richness. It’s indescribably good, and a new classic dish here in the Valley.

Gooey, ultra-cheesy mac and cheese, run under the broiler until its top is browned and blistered, is just as outrageous. Listed as a “munchie,” this rich assemblage could easily make an entrée, especially with the $3.50 addition of roasted Brussels sprouts, andouille sausage, bacon or salty, spicy chorizo (my fave so far).

Another new dish – pickled shrimp toast brightened with licorice-y tarragon and fennel fronds – isn’t quite as effective. The split, lightly toasted Noble roll on which everything is piled is simply too soft to stand up to the moisture in the thin, almost runny shrimp-head mousse and chopped bread-and-butter pickles. With sturdier, crisper bread and a bit of recipe tweaking, this one could be a winner. 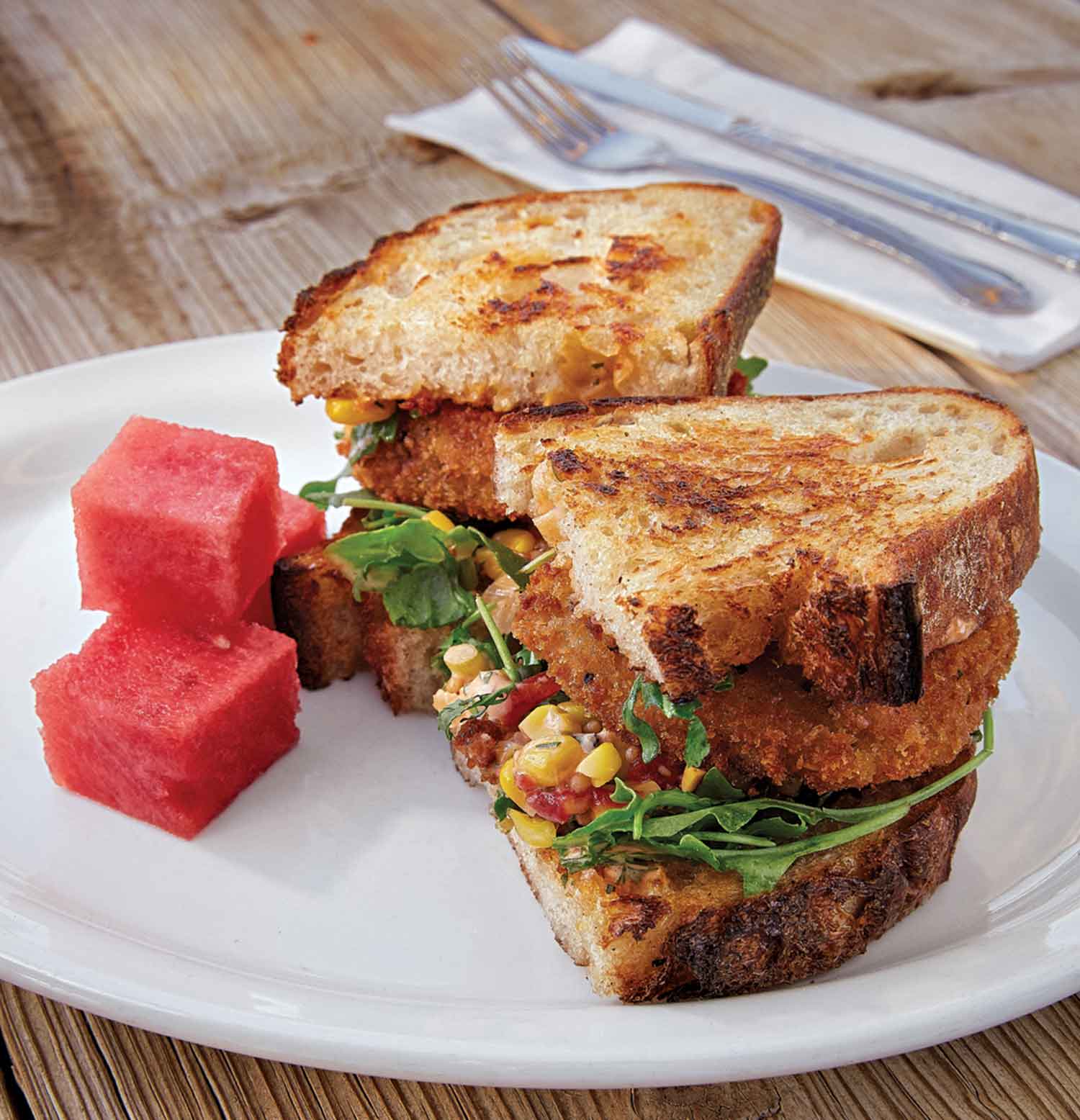 Cornbread panzanella, tossed in charred jalapeño vinaigrette and jazzed up with fresh plums and house-made ricotta, is slightly disappointing, too, but the problem lies in nomenclature. This is essentially a wilted green salad with crunchy cornbread croutons, not panzanella – a savory, ultra-simple Italian bread salad in which crusty day-old bread is doused in olive oil and softened in the juices of fresh tomatoes. I wanted something closer to the latter, which is all about the bread.

On the flip side, Welcome’s grilled cheese just may be the best I’ve ever eaten, combining cheddar, muenster and smoked gouda with smoked tomatoes on griddled sourdough, a crunchy, juicy, melty mashup of old-fashioned comfort. The jackfruit po’boy, another oldie but goodie from Roosevelt, combines Kiltlifter-braised jackfruit (a spiky fruit from southern India whose texture turns meaty when cooked) with mustard-laced Carolina barbecue sauce. The result bears an uncanny resemblance to pulled pork. Topped with red cabbage slaw and tucked in a toasted Noble baguette, it’s a hearty option for meat-deprived vegans.

Welcome’s monster biscuit sandwiches are impossible to eat politely without knife and fork, but so what? The Bumblebee – a sticky-sweet rendering of fried chicken, local honey, grainy mustard and bread-and-butter pickles that skews sweet – is worth the effort. Also surprisingly good is the PB&B, a smoky burger oozing with crunchy peanut butter and topped with bacon (à la Elvis Presley’s signature sandwich), cheddar and bread-and-butter pickles – a nutty, salty-sweet combo that works.

Entrees, many of them Cajun-inflected, are even more impressive. There’s chicken and andouille sausage jambalaya, with jasmine rice simmered in tomatoes and spices until it turns faintly black and crunchy on the bottom of the skillet. Its subtle heat builds slowly, while a red beans and rice special starts to set the mouth aglow almost immediately. Chunky with chewy andouille, it’s the deepest, most satisfying version of this dish I’ve had in a long time. 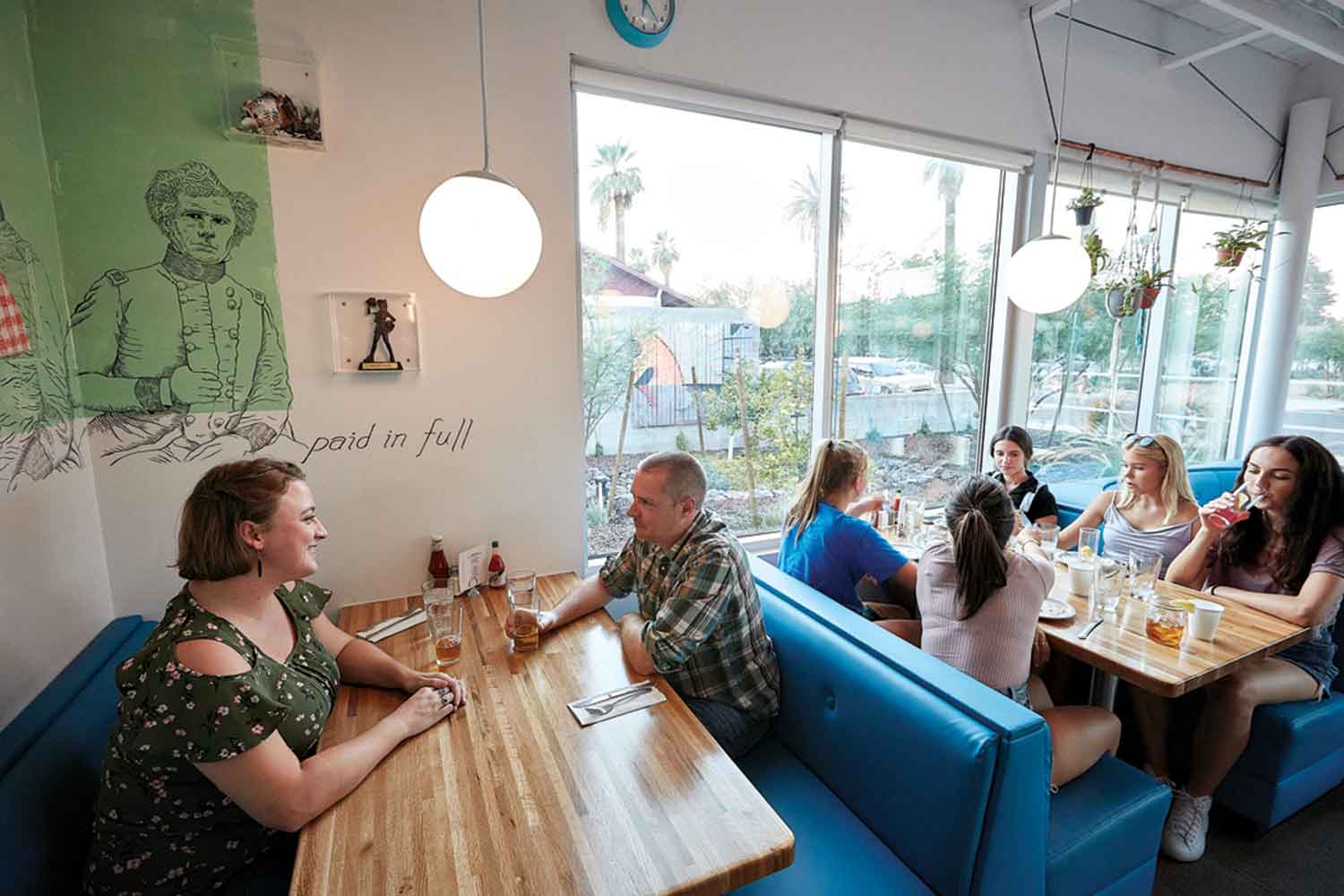 A moist slab of chorizo meatloaf, charred at its edges and strewn with pickled vegetables and Brabant potatoes, sits on a luscious puddle of chipotle-white wine cream sauce that, to my mind, begs for mashed potatoes instead. But, hey, the dish is spicy, tangy and altogether fabulous either way. I also have the urge to hurl superlatives at the restaurant’s supple pulled pork, glazed with mustardy barbecue sauce and liberally ladled over grits, the whole luscious thing topped with pickled onions and a soft poached egg.

If you harbor a sweet tooth, you won’t want to miss Southern-style pies (pecan-chocolate, lemon chess and buttermilk), cradled in tender, flaky crusts. Baked at sister restaurant Welcome Chicken + Donuts, they’re entirely on par with the rest of the menu.

Ultimately, Welcome is not only the Valley’s best and most evolved expression of upscale comfort food – it’s also in the conversation for best Southern cuisine, alongside Southern Rail and Stephen Jones’ reconstituted the larder + the delta. And it marks Valley-born Babcock as a chef to forevermore keep your eyes on. 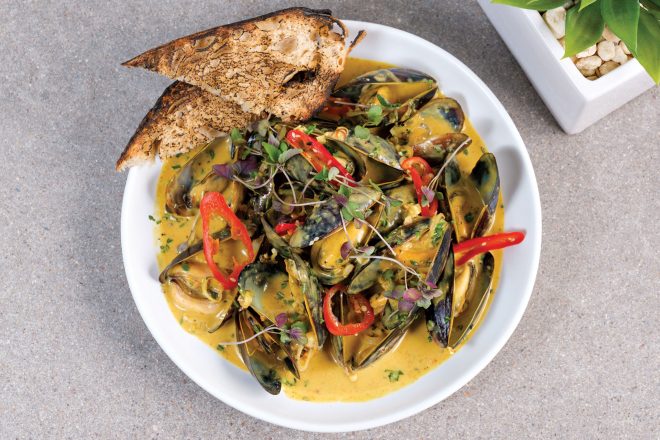 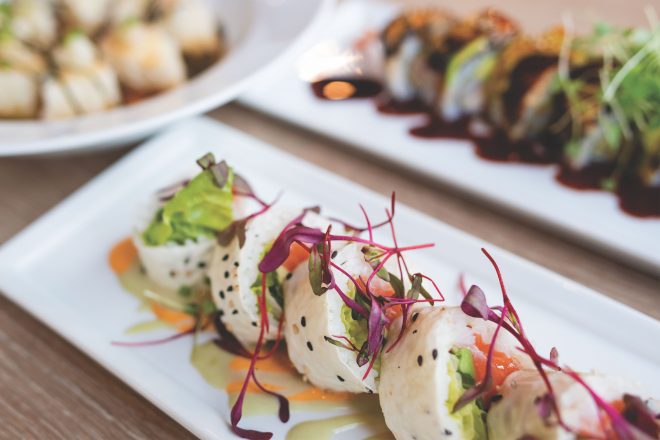