TV and radio star Teresa Strasser “leans out” of Los Angeles and finds happiness and healing in Phoenix.

In the late ’90s, Teresa Strasser was toiling away as a writer for the Comedy Central Show Win Ben Stein’s Money. She was comfortable in the writers’ room, but she yearned to be on camera.

“There were a lot of challenges,” she says. “Back then, hosts of shows didn’t really look like me. They were all blonde and all-American and they didn’t look ‘ethnic.’ … But Ben Stein had a sidekick, Jimmy Kimmel. You might have heard of him. He’s gone on to do a few things.”

When Kimmel left the show, South Park writer Nancy Pimental was tapped to replace him. “Her audition was so phenomenal that little old me, sitting in the writers’ room eating a giant jug of Red Vines, thought, ‘Wow. Maybe this is a possibility.’”

Strasser has since built an on-air career around her wisecracking yet vulnerable personality. She hosted the TLC home design show While You Were Out, co-hosted radio’s The Adam Carolla Show for five years and has been a recurring guest, panelist and co-host on E! for more than 10 years, among other Hollywood bona fides, earning a couple of Emmys along the way (daytime and regional). These days, Strasser is a correspondent on the nationally syndicated TV show The List, produced by the Scripps Network (acquired by Discovery this past March) and filmed at the ABC15 studio in Phoenix, where she has happily settled into being an Arcadia Little League mom.

It’s a “happily ever after” she didn’t foresee during her own difficult childhood in San Francisco, where her father was a conscientious objector during the Vietnam War and her mother, with whom she had a strained relationship, ran a counterculture coffeehouse.

“Does it get any more San Francisco than a coffee shop in the Haight-Ashbury called Sacred Grounds that had poetry readings every week?” Strasser says. “We had a beat poet living in our garage named Max who had been a friend of Jim Morrison’s. That’s right. You can’t out-hippie my family.” 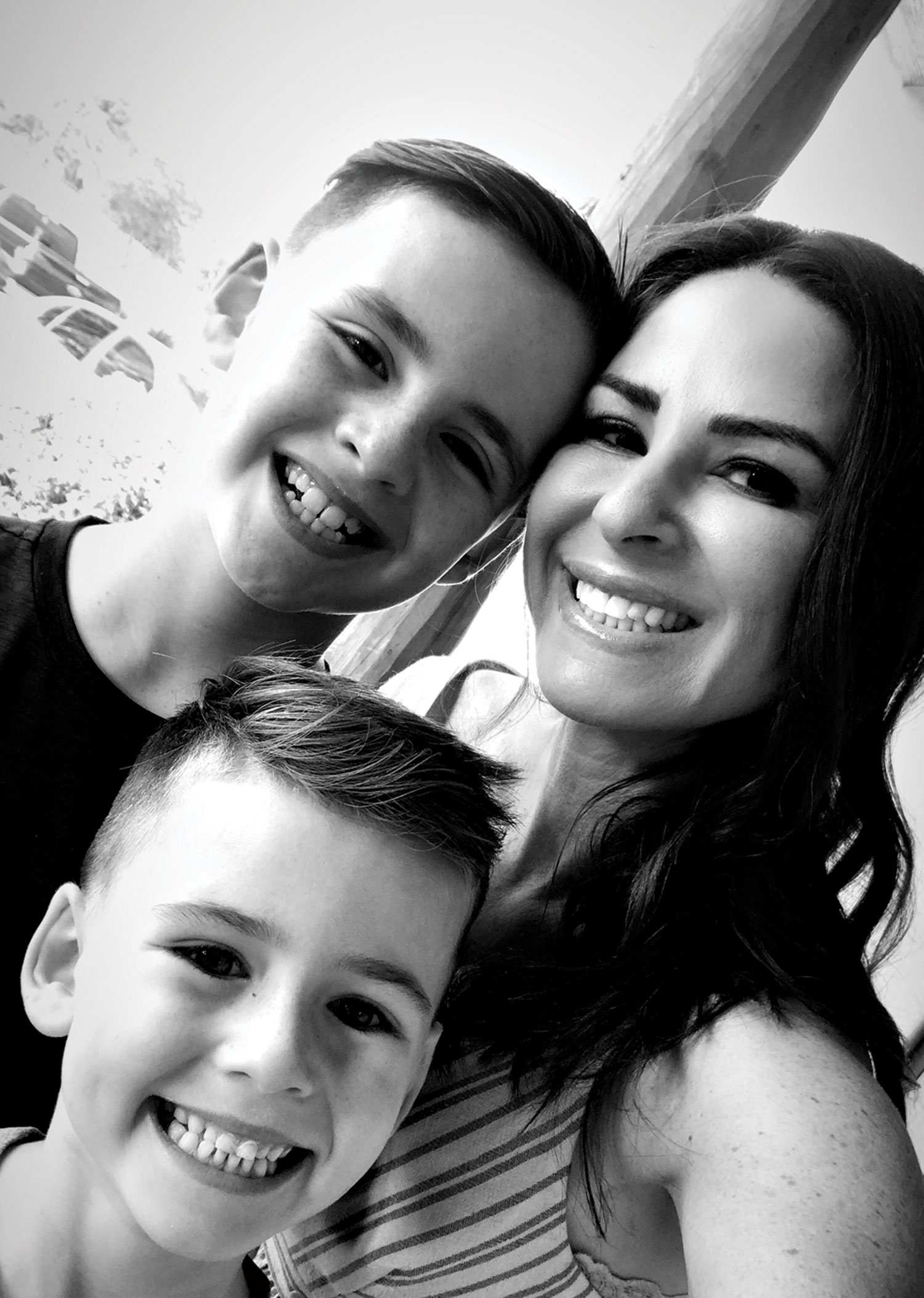 She went to journalism school at New York University and returned to the Bay Area, where she wrote obituaries and profiles of elderly residents reaching milestone ages for a small newspaper. “I really was on the death beat,” she deadpans. Finally, she decided to pursue her TV dreams in Los Angeles, where she worked “on a bunch of shows that weren’t that great” before getting hired at Win Ben Stein’s Money.

It was around this time that she met television producer Ted Kamp, now an executive producer at A&E, who was instrumental in propelling Strasser into on-camera jobs.

“Nobody in the world is faster on their feet. Nobody in the world has quicker repartee,” he says of his friend of nearly two decades. When Game Show Network executives were casting for a new show, Kamp recommended Strasser for the gig. They didn’t bite, but he wasn’t dissuaded.

“I kept bringing her back, and they kept weeding out these people. I don’t know what it was that they were apprehensive about, but she just kept showing up and being just so money every time.” She got the job, but the show was abruptly canceled. Kamp took all the master tapes and put together the reel that got her cast on While You Were Out. “She sort of launched from there.”

Kamp also saw her through “a bunch of crappy relationships” and rejoiced when she met Daniel Wachinski, a financial analyst for IBM she married in 2008. Strasser chronicled her pregnancy with their first son, Nathaniel, now 9, in her 2011 book Exploiting My Baby: Because It’s Exploiting Me, based on her blog of the same name.

“As much as being about pregnancy, it’s about the fear of motherhood,” she says. “It was really surprising, because I had a tough relationship with my own mom and I didn’t know what kind of mom I was going to be or how it was going to feel… I think my book’s been reassuring for people who aren’t totally confident about what type of mom they’re going to be. As I make this point in my book – how hard can it be? Britney Spears has done it twice. Her kids are still alive.”

In fact, motherhood led to her most recent career evolution. When she was pregnant with her second son, Andrew, now 6, she was working on a radio show in the morning and a TV show on USA Network in the afternoon, and developing a pilot for Fox.

“All of these things represented dreams coming true, but I had this mom guilt that I couldn’t have predicted,” Strasser, now 48, says. “I assumed that I was going to be a hardcore working mom like my mom. Only when I got there, it was very depressing.” While she believes moms can work full time or stay home full time and have equally great relationships with their children, she personally “felt like I needed to retune the guitar. Being a working mom – you don’t tune a guitar and weld it.” She told her agent she’d be open to a job in a smaller market with “good mom hours.”

The job at The List popped up, and Strasser and Wachinski found themselves in Phoenix, where her husband was impressed with the schools in their Arcadia neighborhood. She concealed her pregnancy from her new show bosses at first, but eventually the jig was up. “I was basically crowning when we premiered,” she says. “I was huge, I was swollen. I was living in a new city. It was 117 [degrees] on average that week. I thought, ‘What have I done? I’m going to stay here for a year, like in a rehab assignment in baseball, and then I’m going home.’”

The weather switch in October convinced her to stay. “Cut to Halloween and I’m like, ‘Wait, I think I love it here.’ Just in terms of family life, I can’t think of a better place… It’s like my adopted city. I chose it and I love it.”
She moved her dad here and sees him a few times a week, using the hashtag #TrailerParkJews to document their adventures on Instagram. “People think all Jews are wealthy. Welcome to the Strassers,” she says. “Dad’s at the Riviera. Not the French Riviera, the trailer park Riviera.”

Up next for Strasser is a podcast she’s launching this month with friend Gina Grad, who has her old job at The Adam Carolla Show. She’s also been freelancing for AZCentral, working with Phoenix Children’s Hospital and Colleen’s Dream, and writing a humorous book about grief after losing her mother and her brother within four months of each other in 2016.

“Right now she’s overthinking it,” Kamp says of the book. “She just needs to sit down and write. It’s all there. It’s remarkable.”

Strasser sees it as a logical follow-up to her first book. “Instead of about being born, it’ll be about dying. I’ll bookend it.”

Strasser’s Podcast Picks
“I love podcasts,” Teresa Strasser says. “I always want to talk about them with somebody, and I’m always sending them to people.” As she prepares to launch her own, Pod Soup, this month, we asked Strasser to share her favorites.

How Was Your Week? with Julie Klausner

Terrible, Thanks for Asking

You Made it Weird with Pete Holmes