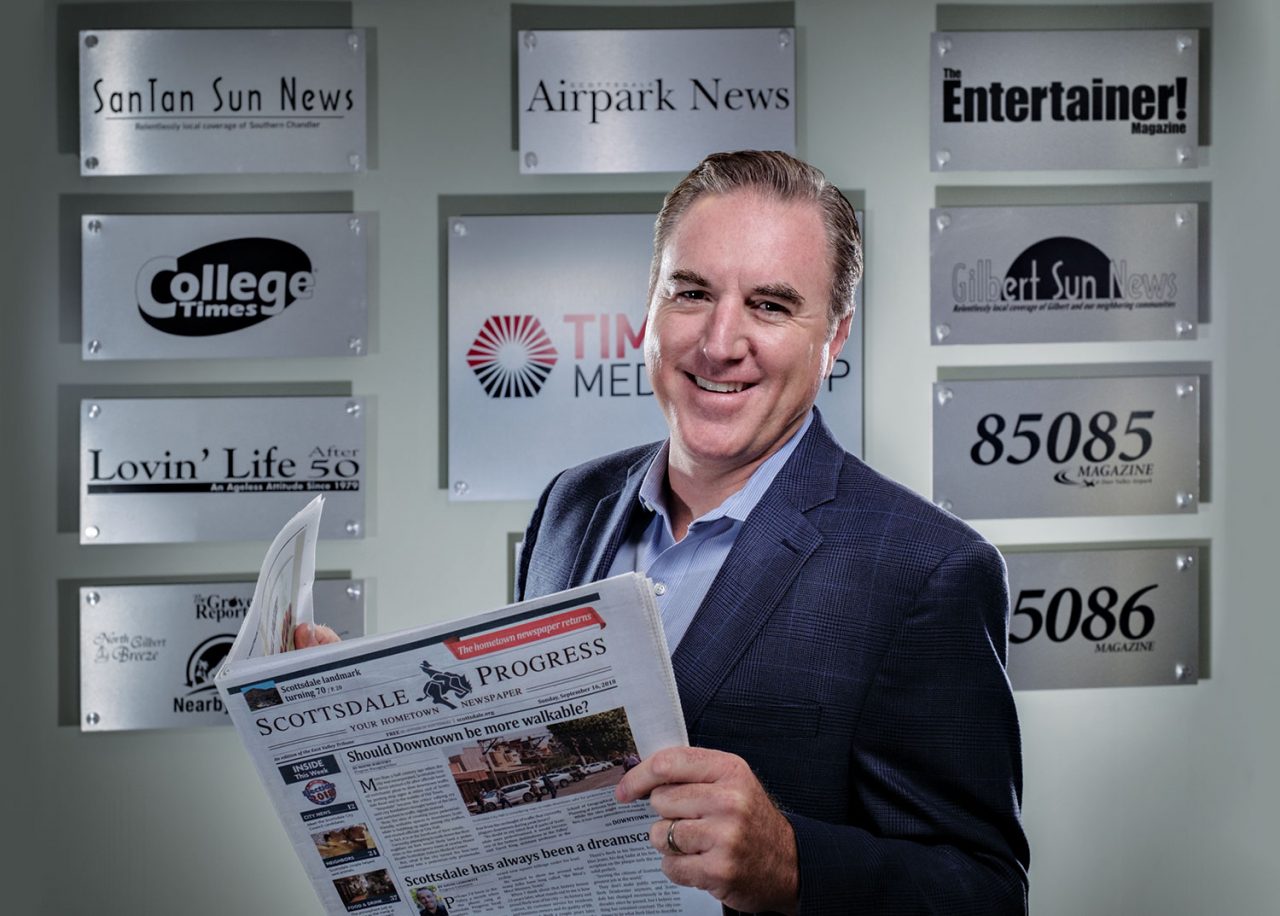 East Valley media magnate Steve Strickbine has amassed an empire of community newspapers. Can he save print in the Valley?

Steve Strickbine says the community suffered when the Scottsdale Progress – which by that point had become the Scottsdale Tribune – shut down in 2009. “I just think [we] really lost something,” he says. “I went over to their office and looked in the windows. I couldn’t believe they had actually closed that thing down.”

The newspaper, which began publication in 1961, lost something that day, too. “I took the sign off the door,” he says. “I still have it in my office. Is that weird?”

Nearly a decade later, Strickbine’s Times Media Group (TMG) has rebooted the Scottsdale Progress as a weekly paper. It’s the latest newspaper venture for the former certified public accountant, who for more than 20 years has been challenging convention in a time of upheaval in the publishing industry.

Strickbine grew up in the Valley and attended Arizona State University. He started out in finance, but it was never his long-term plan: “I literally remember sitting in my office on Central [Avenue] and thinking, ‘What am I going to do? I’m 25. I don’t want to do this forever.’”

He also felt that since he and his wife, Suzy – who works as an administrator in the company – hadn’t yet started a family, the timing was right to take a risk. “I really believed deeply that if I was going to fail at something, I should do it now,” he says. “I’ve always been attracted to newspapers. I even used to go down to the library in Phoenix and look at the old newspaper stories about things that had happened in books I’d read. And I got really interested in the idea that you can make a difference in the community.”

That goal led to the monthly Scottsdale Times, which Strickbine launched in 1997. TMG now comprises 14 publications, including the relaunched Progress, the Scottsdale Airpark News and the West Valley View, along with Phoenix.org, a travel and information website. Some are Strickbine’s creations, but many – such as its flagship, East Valley Tribune – existed long before he took the reins. In those cases, he says, he tries to avoid wholesale changes. “It’s a tribute to the people who started it,” he says. “It’s like [buying] a restaurant. You don’t want to change the sauce.”

But the sauce has changed: The Tribune, for example, once was a daily print newspaper but now is published only on Sundays. It also has a much smaller staff. Unlike old-time newsroom professionals, most TMG staffers are expected to work on several different publications at once – to wear many different hats, and perform a variety of functions, in a scaled newsroom economy.

Given the diminished ad-revenue market for newspapers, Strickbine’s business model is a necessary adaptation, one might argue. But it has also made him a controversial figure in local journalism circles. One former employee, a reporter who spoke on the condition of anonymity, says he had a profit-first philosophy. “When he acquired a news publication, most of the staff was fired [and replaced with cheaper talent].”

Responds Strickbine: “All good organizations are evolving. At one time, the journalism within our walls was much a product of the very limited resources we had. We were doing a lot with a little.” He points to his team’s numerous Arizona Press Club awards, “which were, I believe, a tribute to being committed to telling good stories, no matter the obstacles.” 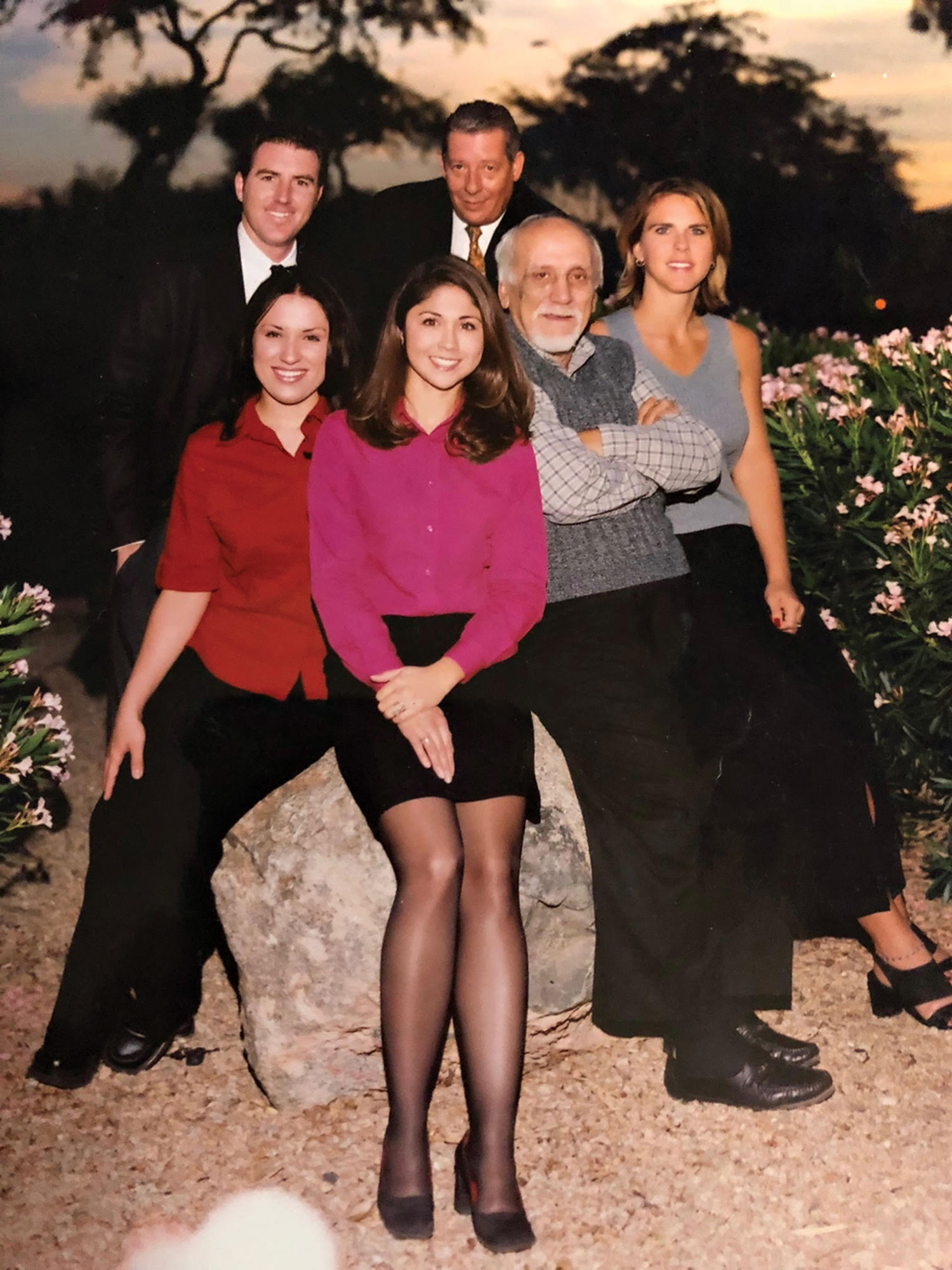 Strickbine believes he tapped an underserved market in the Valley – communities looking for hyper-local coverage, which isn’t possible for a behemoth like The Arizona Republic in an era of shrinking staffs, he says. “It’s about being in touch with the community, and daily newspapers simply cannot do it in a city of 3 million people.”

Along the way, TMG has seemingly pulled off an unlikely feat for a modern newspaper chain: profitability, which Strickbine partly credits to “budgetary discipline” learned when he was an auditor. “It’s a very, very delicate balancing act,” he says. “But it starts, I think, with just knowing the numbers – being completely aware of budgets and all those kinds of things. But it’s [also] that human element of bringing people together… I’ve gotten better at attracting the right people and just finding a win-win.”

Undoubtedly, TMG has amassed an experienced, versatile staff at the Tribune’s office in a Tempe high-rise. It includes Paul Maryniak and Jim Walsh, both longtime journalists for the Republic and other dailies.

“[Maryniak] is willing to sit and proofread,” he says. “He tells me sometimes he feels like he’s back in Pittsburgh when he was in his 20s. He’s able to do things that he wasn’t able to do when he was with the Republic… There’s something that just is inspiring about that culture. I look around and see [managing editor] Lee Shappell – I mean, I read his stuff in the Republic forever.”

It should be noted that the contracting newspaper industry has allowed Strickbine to snag these seasoned pros (including former New Times editor Rick Barrs, hired over the summer) at salaries presumably below their former market value. And pressing higher-ups into service as proofreaders can be viewed as cost-cutting, rather than inspiring dedication.

Strickbine simply says he’s fortunate to have people with “extensive journalism backgrounds” on his team.

He’ll need them to tackle Scottsdale, a city of 250,000 that has always resisted the “suburban” label and “has a very strong PR and public-affairs division within the city,” he says. “[They] have an easy time getting things out to people… So I think the challenge now is to get in front of those stories.”

Another challenge is its geography. “It’s literally 36 miles long and 12 miles wide,” Strickbine notes. “You have this strong dichotomy, I think, between those two areas – North and South Scottsdale – and all the factions within, and a newspaper serves to give those people the information they’re looking for. Eighty percent of the people out there don’t even show up for a local election. So do they really know where they’re going to find the facts?”

The Progress launched September 16 and will be published every Sunday. Reactions to the reboot have backed up his optimism. “It’s just been crazy,” he says. “There’s an overwhelming need there. And, so far, it’s been a resounding positive response.”

Strickbine, 47, lives in Mesa with Suzy and their four daughters, ages 6-14. When he’s not doing family stuff, he’s going for a mountain-bike ride or catching an Arizona Diamondbacks game – or looking for more ways to grow his company.

He’s putting the sign back up, in Scottsdale and elsewhere. And he hopes it can help inspire a new generation of local reporters. “It’s good for people to hear good news in journalism,” he says. “And to get young people excited again about telling stories.”

UNBURY THE LEDE
The Scottsdale Progress is back, making us wonder if these defunct titles might be primed for resurrection.

Phoenix Gazette
Remember when cities had evening papers? The Gazette (circa 1800s), was Phoenix’s version. It shut down in 1997, not long after its staff merged The Arizona Republic. These days, an evening paper might be good for covering the previous night’s Diamondbacks game.

Scottsdale Scene
Originally a monthly tabloid intended to serve McCormick Ranch, SS began covering all of Scottsdale in the 1980s. It shut down in 2003, but Scottsdale’s nightlife would generate plenty of content today.

944 Magazine
Founded in Tempe in 2001, 944 lasted almost a decade and expanded to several markets. Its best-known moment might be when Kyrsten Sinema, now an Arizona congresswoman and Senate hopeful, disparaged stay-at-home moms and called herself a “Prada socialist” in 2006.