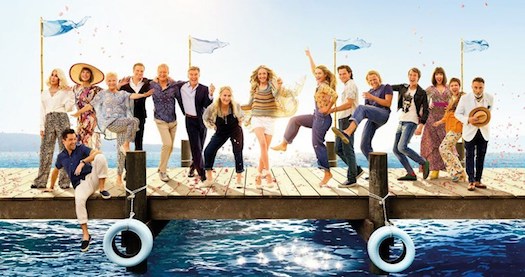 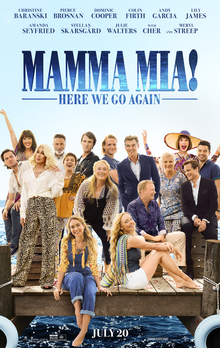 Mamma Mia! Here We Go Again—Once again, a bunch of famous actors caper around a beautiful Greek island, goofing their way through a bunch of ABBA songs. This time, the movie flips between contemporary scenes

of Sophie (Amanda Seyfried) as she struggles to re-open the hotel started on the island by her mother Donna (Meryl Streep), and flashbacks to the ’70s of Donna as a young woman (Lily James) arriving at the island, and juggling three young lovers, with one of whom Sophie was conceived.

Like the 2008 original, this movie is instant kitsch. But unlike the original, which had some initial camp amusement value and the exuberance of Meryl Streep in the lead, but eventually became so mortifyingly corny it was hard to watch, for some reason Here We Go Again is entertaining all the way through. Many of the songs are from lower down in the band’s catalogue—the big opening number, for instance, is “When I Kissed the Teacher”—although the most essential classics, like “Dancing Queen” and the title track, are reprised. Happily, unlike in the first film, the, shall we say, less accomplished vocalists in the cast are better protected here.

Director Ol Parker manages Busby Berkley-worthy high angles during the dancing and some deft transitions between past and present, and James, with her mischievous smile and lovely singing voice, is good company. She’s well supported by Tracy Keenan Wynn and Alexa Davies, who creditably play the younger versions of Christine Baranski and Julie Walters, respectively, and by Jeremy Irvine, Josh Dylan and Hugh Skinner as the young swains.

Back in the present day, Colin Firth, Pierce Brosnan, Stellan Skarsgard and Andy Garcia seem to have fun looking preposterous, or at least are good sports about it. Then, of course, there’s Cher, who descends from Olympus in the last third as Sophie’s grandmother, and unleashes her belt in a duet that’s too freaky too mention. Or to miss.

Don’t misunderstand me, in the end Here We Go Again is as silly and fluffy and weird as its predecessor. But somehow it avoids, in a way the original didn’t, coming across like a self-indulgent karaoke night. It’s a trifle, but it’s a professional trifle. And it builds to an emotional climax that is genuinely, not ironically, touching. 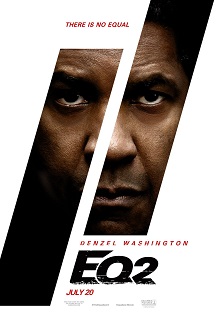 The Equalizer 2—If, like me, you’re envious of those who got to see Denzel Washington this summer as Hickey in The Iceman Cometh on Broadway, well…going to see him in this very violent action picture won’t make upfor it. Not at all.

But it’s still Washington, one of the best leading men in American acting of the last half-century, in a starring role. And he’s still highly capable of carrying a movie twice the weight of this sequel to the 2014 melodrama, derived from the late-80s TV series with Edward Woodward.

Once again, he plays Robert McCall, a former assassin for US Intelligence, now retired—and believed dead—working as a Lyft driver in Boston. He only returns to his bloody old line of work from time to time, in defense of the wronged and powerless. When a close friend is horrifyingly murdered, he investigates, figures out the guilty parties, and the slaughter begins.

The script, by Richard Wenk, and the direction, by Antoine Fuqua of Training Day, are competent but conventional. The pace is even a bit leaden. But in the middle of the movie there’s Washington, and there’s no way around it, he’s just really good. His McCall is grave and taciturn but touched with warmth. He unleashes his intensity sparingly, most memorably during an intervention with a local kid (the agreeable Ashton Sanders) that he’s mentoring who’s fallen in with a gang. He gets the kid’s attention, and ours.

It’s also a pleasure, for me at least, to see a movie driven by middle-agers—not just Washington but vets like Melissa Leo and Bill Pullman. There’s also a sweet supporting turn by Orson Bean, as one of McCall’s Lyft regulars with a tragic past. Bean, who turns 90 this weekend, makes his fiftyish and sixtyish costars look like rookies.

Sunday evening at 8 p.m. at FilmBar:

The Season of the Witch—In this lesser-known 1973 effort from the late lamented George Romero, the formidable Jan White stars as Joan Mitchell, a restless upscale-suburban housewife. Neglected by her dullard of a husband, Joan drifts, somehow very believably, into an inappropriate relationship with her daughter’s creepy academic boyfriend (Ray Laine), and also into witchcraft. Romero remains ambiguous as to whether the horrors which ensue are psychological, supernatural or a little of both; his focus is as much on then-trendy bourgeois alienation as on fright.

If Season isn’t quite on the level of Romero’s harrowing 1968 classic Night of the Living Dead, it’s still pretty potent. It definitely, you should pardon the expression, casts a spell—an ominous, troubling atmosphere of unwholesome eroticism which reaches its peak when poor Joan is unable to escape the sound of her daughter getting it on in the next room. Except for the mostly community-theatre-level acting, it’s almost like a horror picture that John Cassavetes might have made.