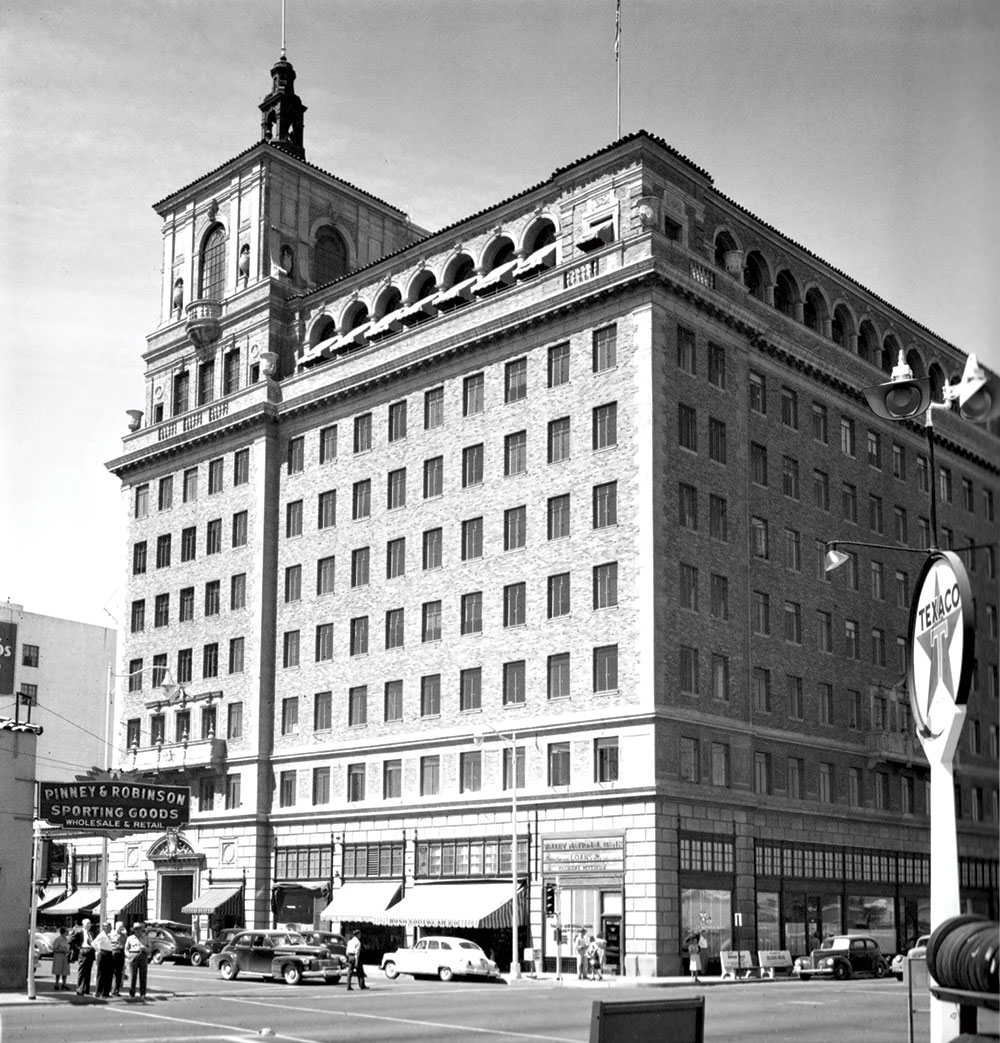 A scandalous financing scheme at the Security Building went untold for 50 years after the Downtown building opened in 1928.

The Security Building was the toast of Phoenix when it opened Downtown at the southwest corner of Central Avenue and Van Buren Street in 1928. At the time, it was Arizona’s tallest building, an ornate structure financed by a 15-person syndicate headed by power broker Dwight B. Heard, publisher of the then-Arizona Republican (and later founder of the Heard Museum). His newspaper labeled the building an “architectural gem” and devoted pages to describe its amenities, from the gilded ground-floor marble lobby to the copper tower’s light, which was visible for 30 miles.

The newspaper, however, neglected to mention the booze-fueled revelry that transpired inside the Security Building while under construction. A half-century would pass before it was publicly revealed that the funds Heard’s syndicate used to finish the project came from allowing a political operative to open an illicit casino and brothel in the building’s top floors for a fortnight. The audacious plan was reportedly approved by senior government officials. “The full story is one of the better skeletons in Arizona’s closet,” Arizona Republic columnist Paul Dean wrote in 1978.

Such shenanigans were not uncommon during the Roaring ’20s. The decade was a transformative time for Phoenix as it morphed from a backwater farm community to a compact, bustling city with paved streets and high-rises. Its economic progress was accompanied by the merriment associated with the time, including a roller-skating craze, vaudeville shows at the Orpheum Theatre, and pretty young things dancing the Charleston at the Riverside Ballroom.

For those seeking less wholesome activities, there were speakeasies, gambling dens and brothels. Prohibition had outlawed booze, but spirits still flowed in Phoenix. Gambling and prostitution flourished, enabled by police kickbacks and fines that enriched municipal coffers. “The 1920s [were] mostly known for vice, not violent crimes, in Phoenix,” historian Heidi Osselaer says.

In this permissive landscape, the Dwight B. Heard Investment Company announced plans to construct the Security Building, an eight-story office building named for Heard’s syndicate, the Security Improvement Company. Business offices would be sandwiched between merchants on the ground floor and a rooftop restaurant. Groundbreaking for the Second Renaissance Revival-style building, which drew inspiration from 16th-century Italian architecture and consisted of a reinforced concrete structure sheathed in hand-molded multicolored brick, took place in December 1927. 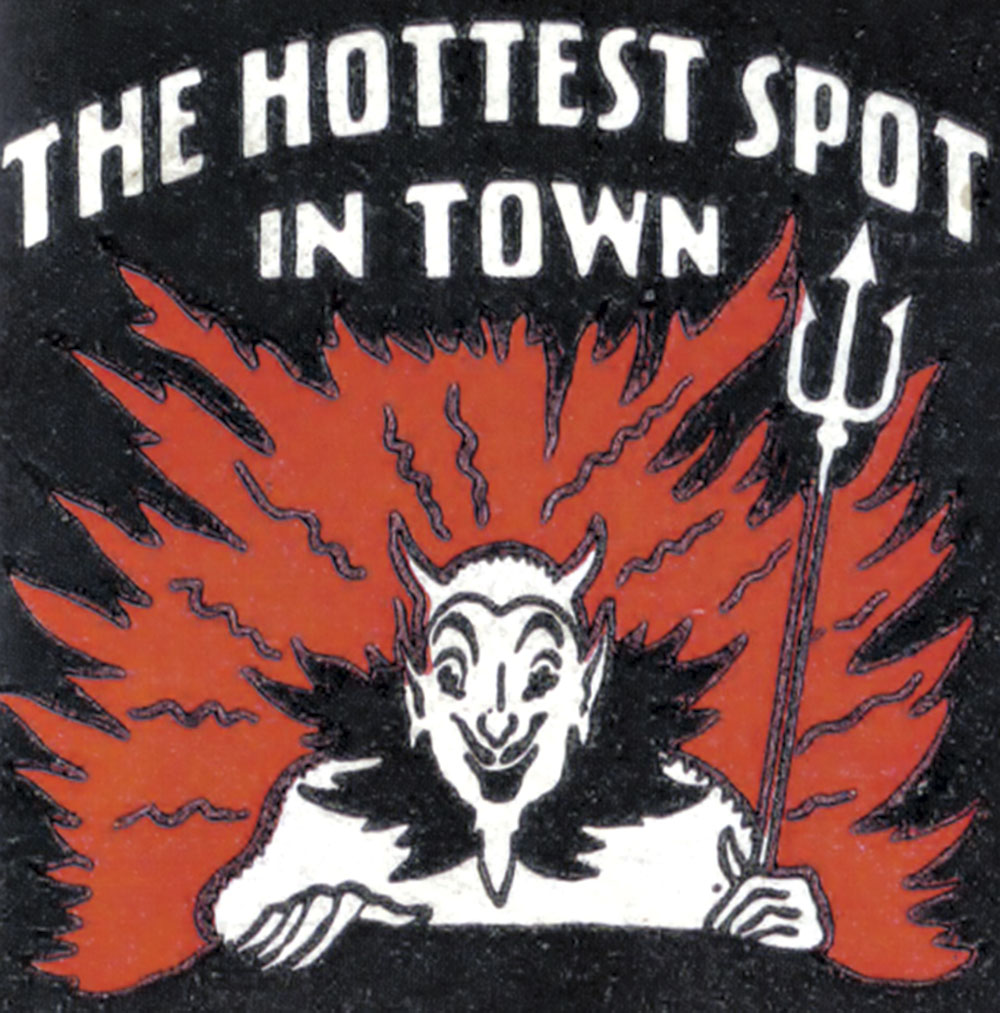 “Phoenix Sky Line Soars,” proclaimed the Republican on its front page when the Security Building opened in July 1928. The issue featured many details of the project, listing the building’s first 50 tenants (including the Fuller Brush Company), the brand of paint used, and that local bandleader Clinton Julian and his orchestra performed on the eighth floor to the delight of dancing couples. This conventional storyline remained the building’s official history for a half-century.

The Security Building’s secret past finally leaked out in 1978, during a celebration commemorating its 50th anniversary. Henderson Stockton, an attorney who was the building’s first tenant and who still maintained a fifth-floor office, was interviewed as part of the festivities by the Republic. The 85-year-old Stockton had become a lawyer at age 17. He was regarded as an outstanding trial attorney and a dapper dresser, known for donning a boutonniere in courtrooms. Stockton was also a political insider who challenged Carl Hayden and Ernest McFarland in the Democratic primary for the U.S. Senate in the 1940s.

Stockton initially told the journalist some folksy anecdotes about the building’s history, such as how sightseers visited his office to enjoy the view. He then dropped a bombshell, describing how a casino and brothel were temporarily set up in the building to finance its completion. The pop-up nightspot abruptly moved elsewhere when a working girl was tossed out of an upper-floor window and landed on Stockton’s windowsill, which saved her life. 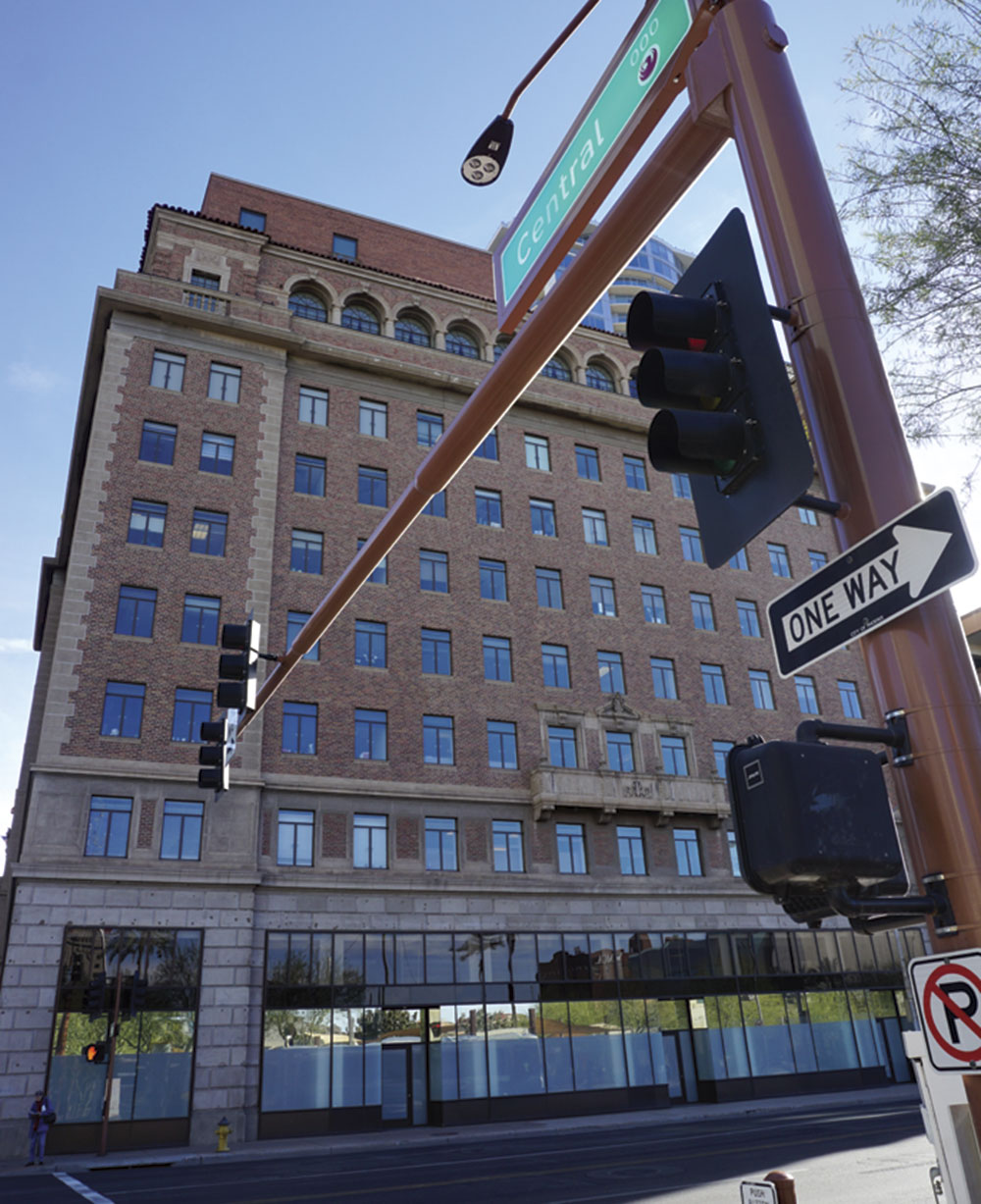 This wild tale caught the attention of Dean, who subsequently interviewed Stockton for his column in the Republic. The lawyer, who was the Heard group’s legal counsel, told Dean he was free to talk about the event since the death of his clients and statute of limitations had waived the attorney-client privilege. “Stockton is a delightful, priceless antique still practicing law from a little museum in the kind of building that makes many thank God for preservation policies of local historical groups,” Dean wrote.

Dean listened as Stockton revealed how Heard’s syndicate lacked $100,000 to complete construction of the Security Building. The group had run out of options to raise the money, and the building was three-quarters finished and in danger of becoming an eight-story shell. Stockton suggested they contact his friend, Wirt Bowman of Nogales, an influential and wealthy national Democratic committeeman who owned several gambling establishments in Tijuana, including a share of the opulent Agua Caliente Casino and Hotel.

The attorney set up a meeting between his clients and Bowman in the back room of the American Kitchen, a famous Chinese restaurant that had been run by Sing Yee at 33 N. Central Ave. since 1902. Bowman told Heard’s group that he wasn’t in the money-lending business but would provide funding in exchange for a two-week franchise to run a gambling club on the eighth floor of the still-unfinished building. 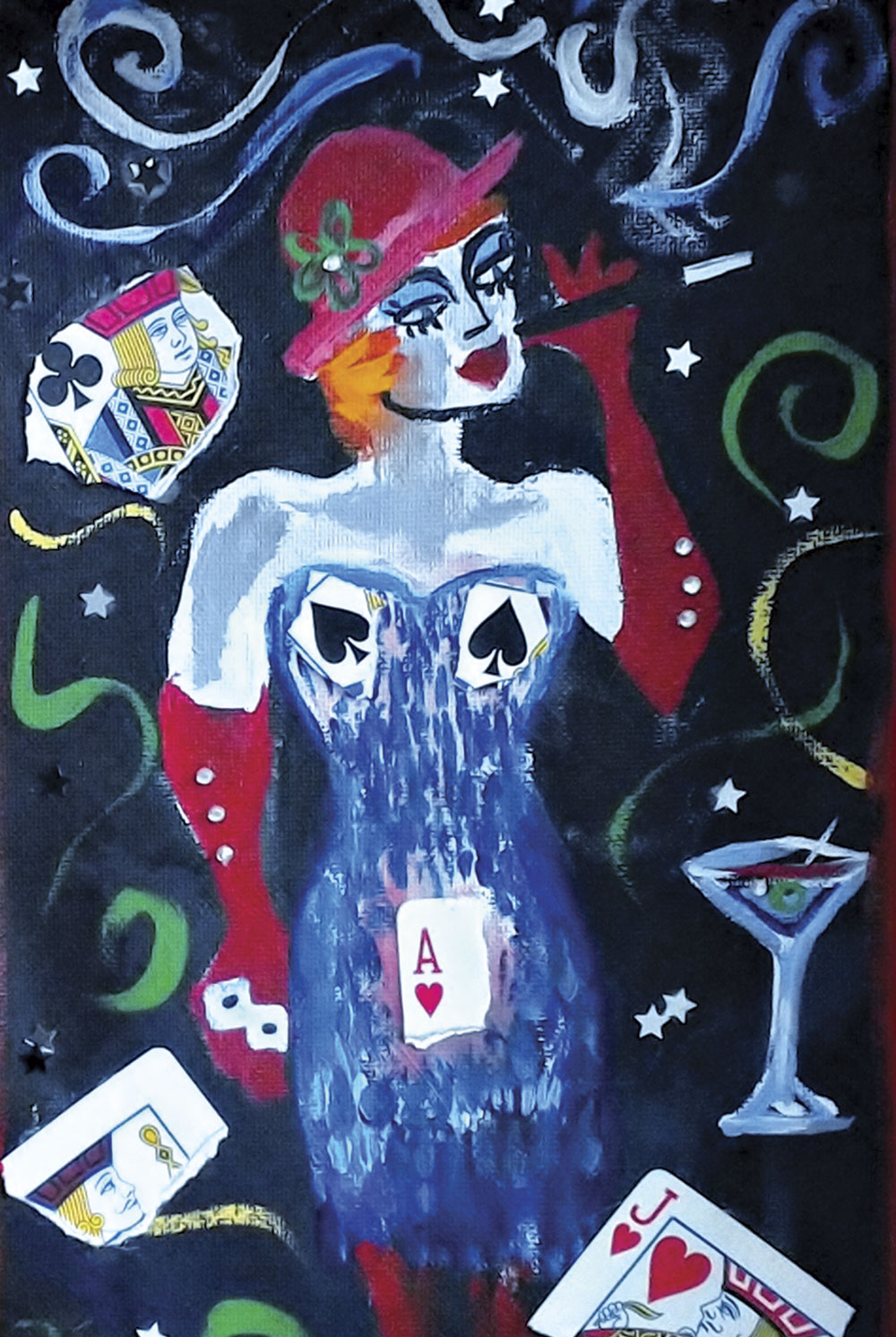 Stockton told Dean he called the governor’s office, looking for off-the-record approval. “‘Stock, there just isn’t anybody smart enough in the governor’s office or the attorney general’s office who could find the Security Building in two weeks,’ Governor George Hunt said.” Stockton made another call, to the attorney general. “‘If the governor says he’s speaking for me, then he’s speaking for me, and if the governor doesn’t know where the Security Building is, then neither do I,’ white-lied attorney general John Murphey.” Maricopa County Sheriff Jefferson Davis Adams, Phoenix Mayor F.J. Paddock and Police Chief George Brisbois parroted Hunt. Bowman provided the money.

Dean writes that the shady penthouse club quickly materialized. “Bootleg booze was trucked in from Mexico and Mogollon Rim stills. Roulette wheels and dice tables and chuck-a-luck cages were imported from Bowman’s operation in Tijuana. With the games, naturally, came the girls. Word traveled like a gully washer, and so did the customers. One corner of Phoenix in 1928 became busier than any block of Las Vegas in 1978.”

The dicey party lasted eight days before it was halted by the flying courtesan who landed on Stockton’s windowsill. The near-death incident didn’t make the police blotter, but the high-elevation locale had become too dangerous for the festivities. Bowman transferred the remaining six days on his lease to the nearby one-story Paul Bennett Auto Supply Company building at 328 N. Central Ave.

Stockton died five months after disclosing one of the boldest construction financing deals ever brokered in Arizona. As the attorney and journalist finished their conversation, and talked about the larger structures that had been constructed after the Security Building (which is still standing), Stockton noted that there was one aspect these new buildings could never surpass. “They can’t possibly have as much fun as we had building this one,” he said.

Sky’s the Limit
The Security Building is one of eight surviving “skyscrapers” in Downtown Phoenix built during the 1920s or immediately afterward. Previously, the city’s tallest building was the six-story Jefferson Hotel, completed in 1915. 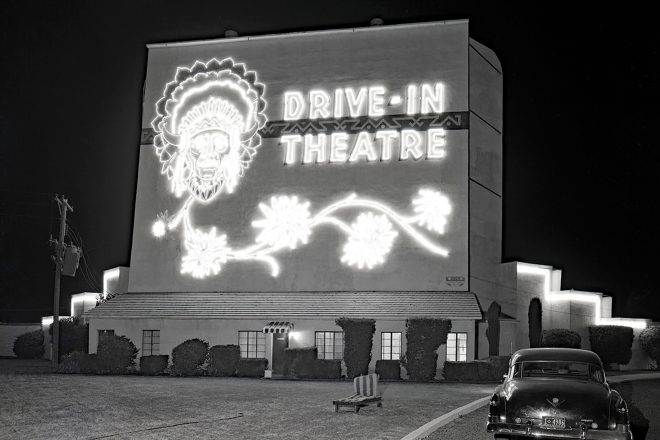 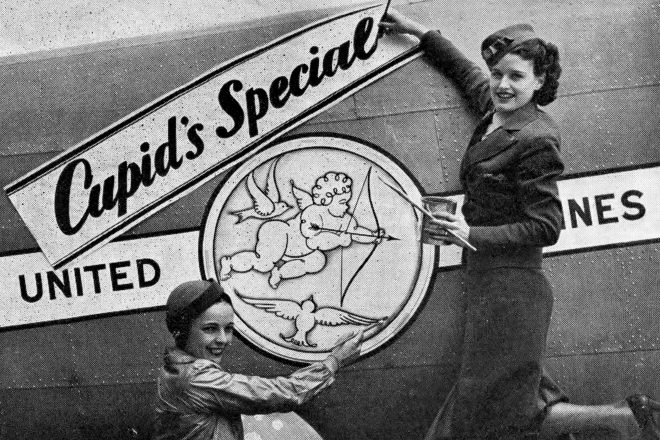