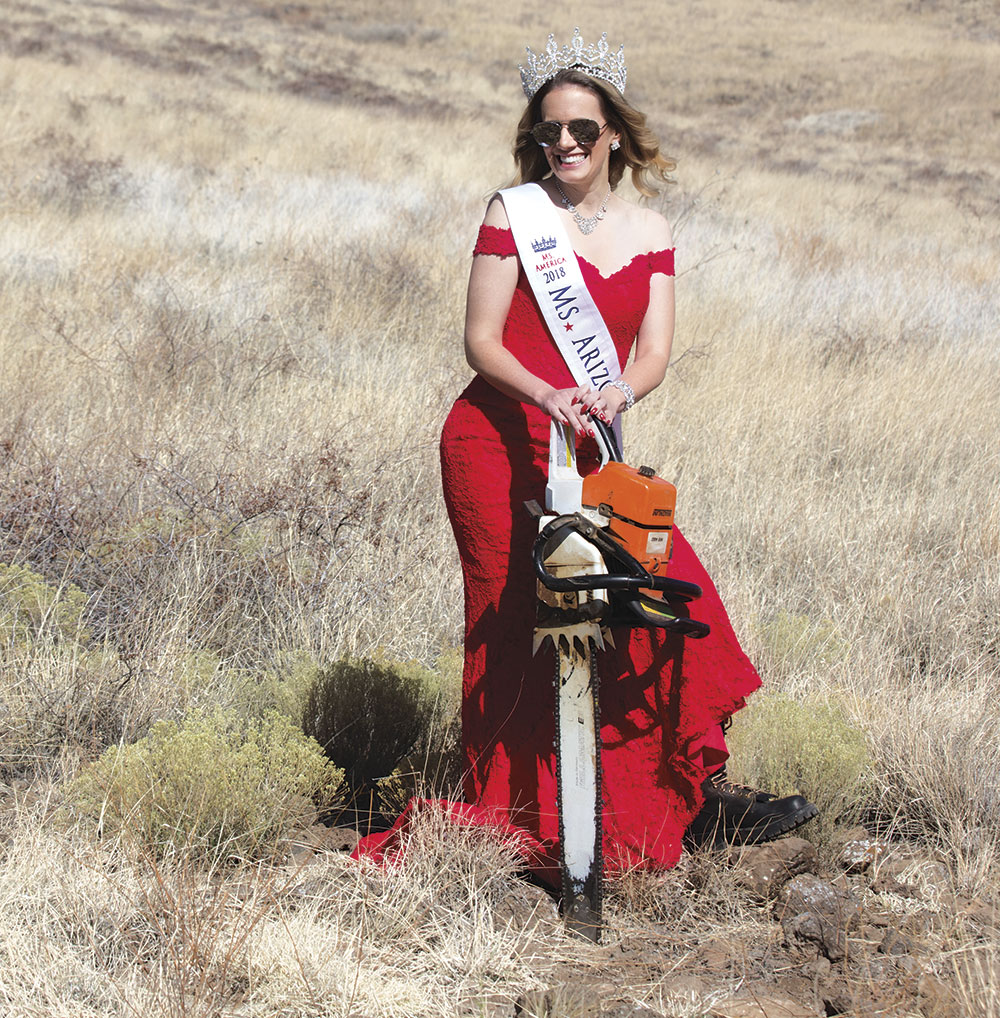 Ms. Fire Cracker
Early riser Cheyenne Warner, 39, is up before the crack of dawn to begin her day with a brisk 2-mile walk, wearing a 45-pound vest on her back. It’s part of her training regimen to keep in shape for her job as a wildland firefighter, stationed in Yavapai County, for the Federal Land Management Agency. The Washington state native and former American Sign Language translator and teacher transferred to Prescott last year from Idaho to supervise a crew of five men. To boost her confidence after arriving in Arizona for her new job, she fell back on a hobby that began in high school – pageantry. Vying for the Ms. Arizona title last year, she traded in her chainsaw, fire-resistant pants and boots for a crown, sash and gown. And won. Her platform encourages women to take on jobs in traditionally male-dominated industries like hers. In March, she flew to Long Beach, California, for the next step – the Ms. America pageant (not to be confused with the Miss America pageant for unmarried women 25 and younger). She didn’t take home that title, but did bring home a renewed confidence and new opportunities to mentor others.

Describe your job. What’s your favorite part?
My particular supervisory job is at the office. But out on the fire line, I’m qualified to [handle command of small fires], act as squad boss for up to five people on initial attack, which includes the smoke report and early dispatch, to try to catch the fire as soon as possible. But my favorite job is public information officer. I work with [reporters]. Some I’ve met before at fire incidents. I love it… Another cool thing about my job is we travel a lot. We’ll fight fires here during fire season, which begins in the spring and ends with the monsoons. Then we’ll travel to fight more in other parts of the country. When we were in Virginia, I got to hike the Appalachian Trail every morning to fight fires there. It was one of those cool moments. But, for me, it’s the physical nature of the job that I really love, and also the thought process and critical thinking you have to go through to fight a fire.

Why pageants?
Work is hard. It’s tough. You’re in the dirt and you’re working with boys. I wanted to get more into my feminine side. It’s not my comfort zone.

How has this kind of personal development affected your day job?
It made me a better supervisor. Whether you’re fighting fires with a small crew or standing on a stage in a bathing suit in front of hundreds of people, you are purposefully outside your comfort zone. I feel like I’m more prepared to handle [discomfort] now. I have more confidence with my decision-making, and I hold my head up higher. It shows up in my command presence.

How do firefighting and pageantry compare?
In both, you face challenges… You see opportunity to do some good. But the major difference is prep time. It takes two hours to get ready for a pageant. It takes me five minutes on a fire day.

Your platform, “Find Your Power Pose,” comes from your work as a firefighter and your desire to see other women and girls be empowered to take on whatever jobs they want. You had mentors who helped you, and now you want to give back. Tell us about that.
I picked this platform because it makes me think of Wonder Woman. She’s got that confident stance… Women make up only 11 percent of the wildland firefighters [nationally]. I’d like to see that change. I know I wouldn’t be here in Arizona with a great career and a great life without my mentors. Currently, I’m mentoring a high school girl in Northern Arizona who wants to be a wildland firefighter. I told my mom I’d be happy if I could show just one little girl who might want to be a firefighter that she can be one. It’s not just a man’s job, and there should be people to help you do it… I feel like I accomplished my goal.