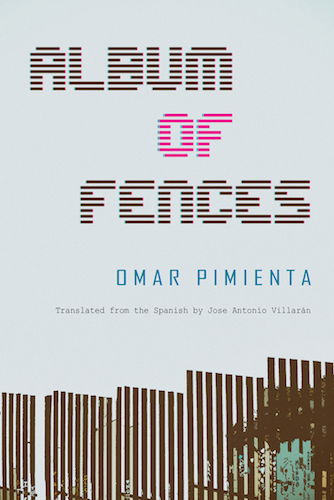 Both poets will be reading from Fences in a bilingual event on April 4 at 6:30 p.m. at the Phoenix Art Museum presented by Cardboard House Press, which published the translation with a grant from Arizona Humanities. Poets Susan Briante and Giancarlo Huapaya will also read from their most recent work.

Pimienta’s biographical book not only includes the exquisite usage of two tongues but also documents his experiences with photography. The book was originally published in Spanish as “Álbum de las Rejas,” (Liliputienses, 2016) and is divided into three sections. The first is about his father, whom Pimienta calls Don Marcos. The second is called “The gradual invasion” and the third is titled “I like to sleep at my friends’ house.”

Villarán, who lived in San Diego for three years and became a close friend with Pimienta, admits that poetry and fútbol brought them together. “I had the pleasure of meeting his family and friends, of visiting his old house and neighborhood, and so engaging with Omar’s work was a very intimate experience for me,” Villarán says. “I could ‘feel’ his poetry in ways that would’ve been nearly impossible had I not experienced Tijuana through his eyes and ears. I fell in love with Tijuana, it reminded of my home in Perú,” says the translator. Villarán is currently working on a book-length project that combines cross-genre writing and ethnographic field research, called “Open Pit.”

PHOENIX chatted with the poets, Omar Pimienta and Jose Antonio Villarán, ahead of the event, about the book and the translation process.*

*Answers have been edited for length and clarity

Your book is beautifully crafted and includes photography along with the poems. Can you describe your writing process for us?
Omar Pimienta: Most of the book was written the same way – out of two photographic sources, my family’s photo albums and my own photographic archive. From a select image, I would write whatever came to mind. I knew that I didn’t want to create a text that would be read as a caption for the image but a text that could expand the photograph. I basically tried to [create] out of two elements – photograph and text – a third field of understanding in the reader/viewer, a place in which she/he could have an active creative participation in understanding the final product.

How do your artistic practices and visual arts expertise influence your poetry?
OP: I think [they] influence it in many ways, mostly because I work around the same concepts: border landscapes, identity, memory, migration, citizenship and emergency poetics. Since I am constantly exploring these same concepts, I find questions and ideas [present in visual arts like photography] that I know poetry can maybe convey in a better way.

How was the translation process into English? How do you think the act of translation affects the emotion, and rhythm, of your poetry?
OP: The translation process was really interesting because José Antonio Villarán is a good friend of mine. He experienced the San Diego/Tijuana border region for some years and he met many of the characters/people that I talk about in the book, [which] gave him all the confidence to work his magic. I believe translation is a creative process and Album of Fences in English is as much his as it is mine. I think he did a great job.

On the other hand, I had to translate the images, if that’s possible, I had to find alternative images for the English version and that image-translation process was really interesting. The images on the Spanish side of the book are not the same images on the English side of the book. Villarán translated my text from Spanish to English, then I had to translate Villarán’s translations into an image.

What is your translation process, Jose?
Jose Antonio Villarán: As a translator, I try to be as invisible as possible. I strive to capture the beauty and sound and meaning of the work in the original language, in a way that conveys that same energy and movement in the translation. Ideally, readers won’t even notice there’s a translator, and would just feel like they’re reading Omar’s work in English.

One of your poems (poem No. 11), Omar, is written like how a native Spanish speaker would speak/understand English, and the translation retains the same exact words. What is your expected reaction from readers who only speak one language?
OP: Great question! I have read this poem in San Diego, Los Angeles, Tijuana, Mexico City and in Madrid, Spain, and it has always been the same reaction, some giggles and at the end some serious smirks. If the reader doesn’t get the full content of the poem, she/he will always at least get a feeling of the complexity of [living in] a binational region.

JAV: That’s an excellent question. I’m not sure how readers that speak only one language would engage with this poem; it might be a bit confusing for them. I toyed around with trying to do the same in English, of trying to have a poem that explored how an English speaker would pronounce Spanish words. In the end though, I felt like the best I could do is leave the poem as it was, realizing that its full meaning and experience might escape readers that only speak English. But there was a certain energy in this poem that I felt could not be properly translated, or rather, that I preferred not to translate.

How does this book compare to your other previous books?
OP: It is really similar. It is actually a kind of a spin-off of Escribo desde Aquí, my previous book. That book won the 10th Emilio Prado International Publication Prize from the Centro Cultural Generación del 27 Malaga, Spain in 2009 and it did because I took the images out of the manuscript. I wrote that book with the same mechanism – photos with text – but no place would accept a manuscript with images, so I took out a quarter of the poems and all of the images. Those poems and their paired images, are part of Album of Fences.

If you had to pick one of the poems as your favorite, which one would it be? And why?
OP: I don’t have one, and if I had [to pick a favorite] it wouldn’t be mine. [laughs] But if I had to select one from this book, it would have to be No. 9.

Don Marcos Did you always use a baseball cap?
Yes-son, what I rarely used was my head

Don Marcos how many times did you get deported?

my son I lost everything.

I would select this one because I really didn’t have to do much, I just asked my father a couple of questions and in his answers, I found the bittersweet story of his life.

Album of Fences is coming out in the middle of a cultural firestorm over America’s borderlands. What is your expected reaction from readers who have never lived or experienced life on the border?
JAV: I hope readers who have never experienced life on the border realize the intensity of living in two countries, in two languages, in the same day. I hope they experience the anger and frustration some people feel when they have to put up with racist/bigoted customs and border patrol officers, and how this reflects on the current state of affairs in the United States as a whole. But also, and perhaps more importantly, I hope readers can experience the joy and liveliness of this beautiful borderland.

What would be your advice for aspiring and upcoming Mexican-American and Latin American writers?
OP: I guess I would have to say, keep writing; even if it hurts you or others, keep writing because exploitation is made of silence. But then, right after I would have to say something like: don’t take it too seriously; nothing should ever be that serious.

You can purchase the book online or at the event.