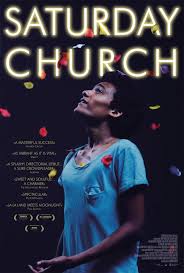 The feature debut of writer-director Damon Cardasis, Saturday Church tells the story of Ulysses (Luka Kain), a New York teenager who has begun to notice an interest in wearing women’s clothes. His devoutly churchgoing family – recently widowed Mom, sternly religious Aunt Rose and pesky younger brother – have noticed it too. Thus Ulysses begins an odyssey (see what Cardasis did there?) that takes him to an Episcopal church in the Bronx with a Saturday night program for transgendered youth, where he finds acceptance and love.

Initially, the film has nice low-key realistic feel, something like one of those “After-School Specials” of the ’70s, but here and there, it shifts into a musical number – one of the best, early on, is a woozy, scary dance sequence between Ulysses and some jock bullies in a locker room. The two styles – naturalistic drama and extravagant musical – coexist a little awkwardly in the same movie, but the result is heartfelt and original. Kain is deeply touching as Ulysses, and the ensemble around him is exuberant.

Fergus O’Brien’s Against the Law (3:15 p.m. Saturday) dramatizes the decriminalization of homosexuality in Great Britain; Jennifer Reeder’s Signature Move (5:15 p.m. Saturday) is a cross-cultural comedy about a Pakistani lesbian Muslim lawyer in Chicago; After Louie (8:15 p.m. Saturday) stars Alan Cuming as an aging gay-rights activist in a relationship with a younger man. Joachim Trier’s supernatural tale Thelma, (1:45 p.m. Sunday), from Norway, concerns a young woman whose sexuality and telekinetic powers are awakened at the same time.

The Fest also features a variety of shorts programs. All access passes are $80 and include priority seating and entry to all films. Go to desperadofilmfestival.com or call 602-787-7738 for details.