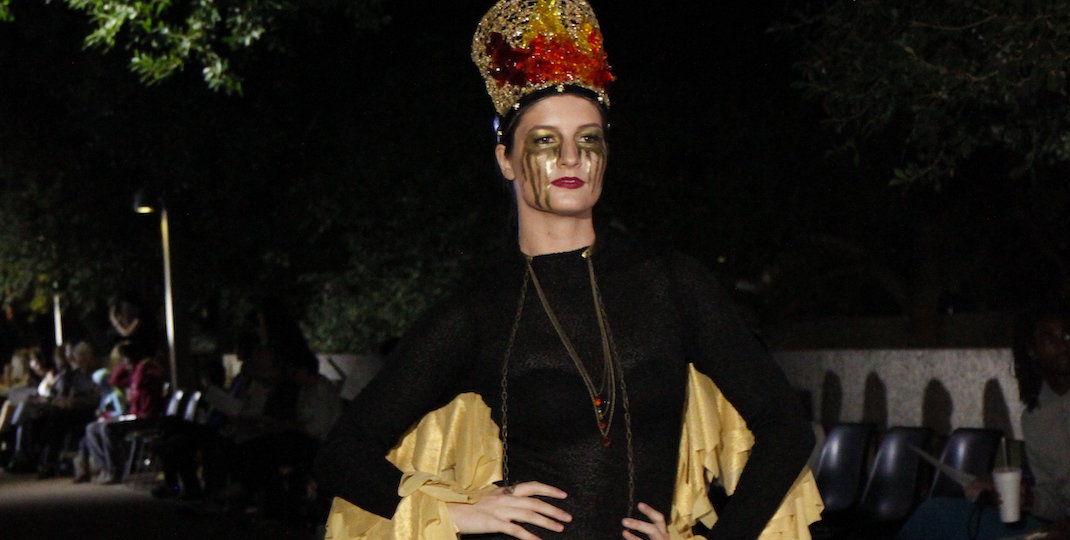 Intended as a symbol for the baby steps growth of Arizona’s fledgling fashion industry, LabelHorde’s fashion show at the Tempe Festival of the Arts last weekend brought 60 local designers together to the deck of Tempe City Hall to feature a signature look from their respective fashion lines. This showcase proved that fashion is inclusive to all, regardless of culture, age, or species (dog models, anyone?). Neither pretentious haute couture nor crummy “fast fashion,” the lineup revealed Phoenix’s unique tastes – both the wearable ones and the, shall we say, interesting ones.

The show kicked off with inventive looks, one of which came from the show’s organizer, Angela Johnson. Her designs, all consisting of upcycled, used clothing, revealed the common theme of sustainability that would be repeated many times over in different designers’ works.

While some outfits were not necessarily Phoenix Fashion Week levels of fancy, there were some elegant looks, like designer Devla Imperatrix’s Parisian dress from her Atelier Imperatrix line. There’s nothing like a lace fan to “put on airs.”

Charm & Royalty Inc. followed with an equally stunning look from designer Eve Clark. White was truly the winning color of the night.

If you haven’t noticed lately, the ’70s are back, baby. Fashion line Dakota Jeane played up the trend with playful takes on classic ’70s looks including tied-bandana shirts, high-waisted bell-bottoms and blue eyeshadow.

Meanwhile, the kids weren’t left out of the line-up… although I don’t know many other 11-year-olds like designer Kimmy Pasternack who’d rock a cat collage dress or silky red jumpsuit*.

*Editor’s note: I know plenty of 30-somethings (like this one) who’d wear that fire jumpsuit in a heart beat.

THE WEIRD
As for the quirkiest aspects of the night, it was a tie between the models’ poses and the head couture.

Lifestyle home accessory brand Couture Aprons helped open the show with an ornate headpiece with a dress to match, and Julia Garina’s outlandish look for her brand JGs Rio Craft brought home the idea that fashion on the runway goes beyond the norm. I’m not sure of anyone besides Frida Kahlo wou’d wear such a crown.

The signature pieces from clothing and jewelry business SherryJDesigns had the best of both worlds; a bedazzled football does wonders in pulling an outfit together.

Despite only having one or two models to represent each designer’s brand, the personalities of each business shined. The flamboyant pose showing off Navajo Mermaid’s kimono speaks for itself.

My favorite look of the night goes to Dripping Dog, a niche clothing line from Shari Mindlen dedicated to bathrobes for dogs. Yes, another thing pet lovers did not know they needed in their lives.

LabelHorde’s fashion show, by no means orthodox in location or style, brought out Arizona-based designers and represented the Arizona clothing industry as it is: diverse, vibrant and quirky. Sure, we’ll never be Paris (or New York or L.A.), but this memorable show proved that success is within reach for these local brands.