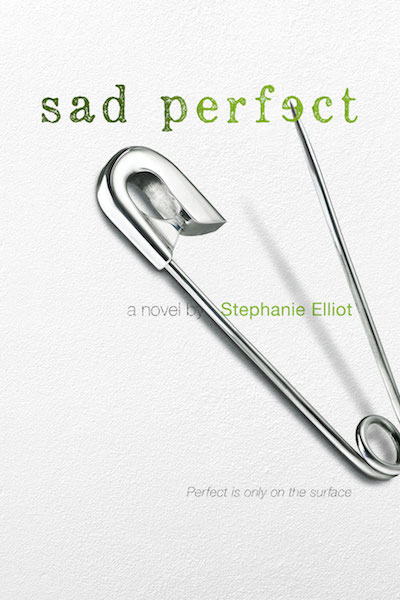 Pea is inspired by Elliot’s real-life daughter who shares the same little known eating disorder, avoidant/restrictive food intake disorder (ARFID). This disorder is usually shrugged off as picky eating and wasn’t even recognized as an actual disorder until recently. ARFID is unique because it is not an eating disorder based on self-esteem or body image, Elliot says. ARFID limits the consumption of certain foods due to the food’s appearance, smell, taste, texture or a past traumatic experience. Elliot’s daughter has combated this unique eating disorder for most of her life and was eventually diagnosed three years ago at age 15.

Elliot began writing “Sad Perfect” while her daughter was in a 20-week intensive outpatient therapy program. According to the National Eating Disorders Association, 30 million Americans will struggle with an eating disorder at some point in their lives, but many will not receive the help they need to heal.

Elliot, 47, is a Chicago transplant who has lived in the Valley for seven years, and self-published four women’s fiction novels before “Sad Perfect.” We caught up with the author before her hometown book signing next Saturday, March 4 at Changing Hands in Downtown Phoenix. How much did the lack of representation or awareness of this specific disorder inspire you to write this novel?

Before my daughter was diagnosed, I had never heard of ARFID. She had this strange eating problem her whole life. Certain foods would make her gag. She couldn’t be around the dinner table with us. She would not try new foods. We went to therapists and doctors and everyone said she was fine and she would grow out of it, but we knew it was something more than her just being a picky eater. So, when we finally went to a doctor who knew what ARFID was, we felt immense relief because we had an answer and we knew there would be treatment.

What was your daughter’s reaction to the novel?

For me, when I started writing this, I knew how important it was because there had to be other people out there who were going through the same problem. I was probably halfway through and I thought something’s happening here and I can’t not tell her that I am writing this fictional account about what she is going through. She was so excited because she’s very proactive about sharing her story. She has YouTube videos about her journey and experiences, and she shares what it is like to have ARFID with anyone who will listen. She was very happy that I was going to write the story. She’s probably happier than I am that the story is being published.

What do you hope readers take away from “Sad Perfect”?

I want people to realize that ARFID is a real eating disorder. There’s going to be a day when people will say, ‘so-and-so has this disorder they’re just not diagnosed yet,’ because ARFID is so prevalent even though it’s only been a known disorder for about three years now. And I want people to have sympathy for those who have ARFID and understand that these people truly have a fear of introducing new food into their system. I want people, especially teens, to come away with hope from the story and that all eating disorders, with the right kind of help, can be treated.