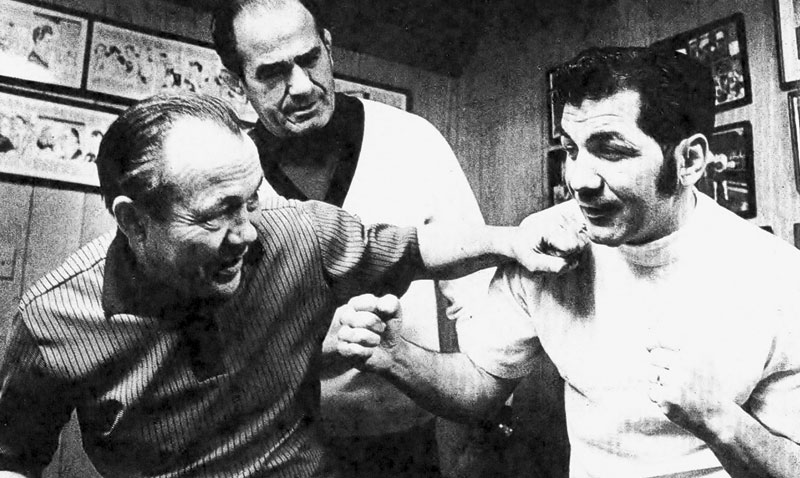 Tony DeMarco’s fame as a former world boxing champ made his lounge on Camelback Road a thriving hangout in the 1970s.

Messing with the bartender is seldom a good idea, but it’s especially inadvisable when the guy mixing cocktails was an illustrious prizefighter with a legendary left hook. Not that renowned welterweight Tony DeMarco ever used it at the Living Room Lounge, his now-defunct Phoenix piano bar. Known for his friendliness and charm, DeMarco spent 15 years ensuring his nightclub lived up to its motto, “Where Good People Meet.”

“The bar never had any major fights, just a few heated arguments,” says the fighter, now 81 and living back in his hometown of Boston. “I think my world championship welterweight belt displayed behind the cash register cooled off any explosive situations.”

Opening the lounge in 1968 on the southeast corner of Camelback Road and 40th Street, DeMarco capitalized on his fighting fame and celebrity connections to promote the business. Musicians performed nightly, usually on piano, with customers often crooning along. The interior was decorated with DeMarco’s spectacular world championship belt and photographs of him posing with luminaries like Ted Williams and Tony Bennett. Other sporting celebs of the day also frequented the lounge, but the main draw was DeMarco.

Eventually, the fighter’s retirement garden of drink and song went fallow. DeMarco survived innumerable blows in the ring, but it took a family tragedy to knock the wind out of him and put his lauded lounge down for the count. Today, a U-Haul occupies his former lounge space, on a street corner that’s eyed hungrily by developers and restaurateurs – something DeMarco says he foresaw. For all his pugilistic gusto, he was a savvy businessman, and had a few breaks gone his way, he might still be pouring drinks at the Living Room today.

DeMarco was born Leonardo Liotta – or “Nardo” – in 1932, to a blue-collar Italian family in Boston. He discovered his pugilistic passion as a youth on a visit to the local boys club. By age 15, his talent had outgrown the club boxing circuit. Not content to wait three years to meet the age requirement for an amateur license, he jump-started his fighting career by borrowing the baptismal record of his older friend, Tony DeMarco. Sporting a new name, DeMarco triumphantly entered the amateur ranks by scoring a second-round knockout.

His professional debut came in 1948, with a first-round knockout of Meteor Jones before 8,000 fans at the Boston Garden. He built a 45-6 record before taking on titleholder Johnny Saxton on April 1, 1955, at the Boston Garden. DeMarco recalled that night in phone interviews with PHOENIX magazine, describing his expectations in a gravelly voice thick with a Boston accent. “The pressure was unbelievable, but I honestly felt in my head that I would not be denied.” And he wasn’t – DeMarco won with a 14th round technical knockout (TKO) and was honored with a parade in Boston, presented with a personalized “TKO” Massachusetts license plate, and appeared on The Ed Sullivan Show. But in his first title defense, in June 1955, DeMarco lost to Carmen Basilio in a 12th round TKO. A rematch six months later, which The Ring magazine named the “fight of the year,” resulted in another tough defeat.

DeMarco continued to fight, but was never able to regain the championship, hindered in part by hypoglycemia. He retired in 1962 with a record of 58-12-1. “The desire was gone; it was time to move on,” DeMarco says.

He moved to Phoenix in 1963 to relieve his son Vincent’s asthma, and purchased the struggling Silver Poodle Cocktail Lounge in Arcadia in 1968. At the time, the Camelback Corridor – now home to The Grind, North Italian Farmhouse and other hot spots – was just starting to warm up; DeMarco’s bar neighbored a gas station, a barber shop, an animal clinic, a Baskin-Robbins, and the Hitching Post Restaurant and Cocktail Lounge. DeMarco says the location was the main reason he bought the lounge. “I had plans to develop the place into a sophisticated nightspot, not as glamorous as what you might experience in Las Vegas, but it would be a classy local lounge with live music,” he wrote in his 2011 autobiography, Nardo: Memoirs of a Boxing Champion.

Buzz about the champ’s lair spread and the bar attracted stars like country singer Charley Pride. “We had a lot of regulars; a few couples who met there even went on to get married,” DeMarco boasts.

The bar also turned into a Beantowner hangout. Boston Celtics coach Tom Heinsohn and announcer Johnny Most stopped by when their team was in Phoenix. Tony Conigliaro, a star for the Boston Red Sox, came by the lounge to sing. “If he had not chosen baseball, he could have had a career in show business as a lounge singer,” DeMarco claims.

Business abruptly dropped off, however, when nearby road construction made it difficult for barflies to reach the nightclub. That’s when DeMarco’s friend helped out. “Sonny King, who once was Jimmy Durante’s partner, visited from Las Vegas for an engagement at the Playboy Club,” DeMarco recalls. “After each of his Playboy Club shows, King came to perform at the Living Room Lounge. People flocked in to see him and it really helped get the place over a rough spot.”

Tragedy struck in 1975 when DeMarco’s son Vincent, then 14, died after being hit by a car. It was a devastating blow that flattened the former titleholder. “The reason we moved to Phoenix was to help my son’s asthma, but we still considered Boston home,” DeMarco says. “Business was down at the lounge and I had only about three more years on my lease.”

DeMarco sold The Living Room in 1982 and moved back to Boston to become an officer for the Massachusetts House of Representatives. He retired in 1998. The former champ was honored in Boston with a street renamed for him and a statue. A bit of the champ, however, remains here. While developers – including dining impresario Sam Fox – have futilely tried to wrest control of the property from U-Haul, the current occupant pays tribute to the pugilistic pioneer who preceded them. The west-facing wall of the store is adorned with a colossal image of DeMarco in his boxing prime. “My wife, Dottie, and I were visiting Phoenix a few years ago and saw it, much to our amazement,” DeMarco says. “U-Haul never contacted me about it. I was really touched by the gesture.”