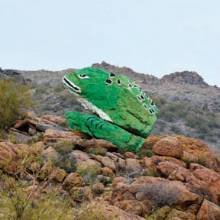 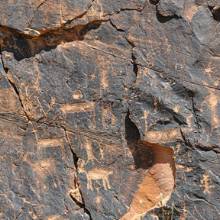 Central Arizona A rock and two hard places:
They say it isn’t easy being green, and that’s definitely true for the giant stone toad crouching in the desert about a half mile north of Congress on Highway 89. Since the 1920s, locals have performed pro bono facelifts on the frog-shaped boulder (see page 48). George Carter, 94, and his wife, Mavis, 93, applied the most recent coat of paint in 1997. “I had to climb to the top rung of a 16-foot ladder to paint the little circles on top of the frog,” Mavis says, adding that George slathered on the gallons of green.

Secret speakeasy: From Jenny Longhorn’s, walk a block to 228½ S. Montezuma, where underneath the rumblings of the dry cleaning equipment at Moore’s Laundry there once rumbled a greater ruckus. If time allows, the staff permits the curious to descend downstairs into a pitch-black Prohibition speakeasy where primitive shelves once stored moonshine for patrons who bellied up to a 15-foot-long pine log bar. A sizable portrait of Franklin D. Roosevelt hangs on a concrete wall underneath the painted inscription “Just a Real Good Man.”

Booming church: From Whiskey Row, take Highway 89A over Mingus Mountain into Jerome to the Powderbox Church, so-named because Mexican miners banned from worshipping with whites used empty dynamite boxes to construct it in 1939. Now beautifully restored, the building is prerequisite subject matter for regional artists. The Powderbox isn’t rigged to blow, but it is private property, so no window-peeping, please. To get a great photo, take Douglas Road toward Jerome State Historic Park.

All that glitters is gold: From Jerome, head down Highway 89A to another boxy building in Old Town Cottonwood. The Art Institute of Glitter (720 N. Balboa) was originally constructed with World War II ammunition boxes. Today, the glitter shop ships an estimated 60,000 pounds of sparkly stuff per year, says artist Barbara Trombley, whose peppy demeanor glows even brighter from the glitter lodged in her pores. Check artglitter.com for a list of craft classes. 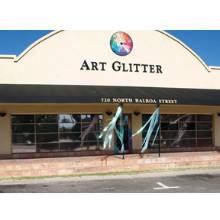 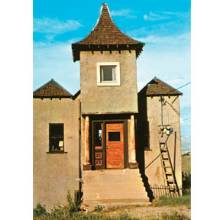 Photos – From left: The Art Institute of Glitter in Cottonwood • Powderbox Church in Jerome

Art colony: A visit to Eliphante near Cornville teeters between magical and maniacal. Built out of natural and found materials by the late artist Michael Kahn and his wife, Leda, the three acres of grottos, galleries and studios enchant and defy convention. In this wonderland where misfires from craft studios become mosaic walls and mud mortar, and driftwood and rocks are architectural elements, one half expects the Mad Hatter to burst onto the scene. Visits are by appointment only and require shuttling across Oak Creek by boat. A $15 donation is requested. Call 928-634-2687.

Steer toward the steer: Backtrack to I-19 and head south from Tucson, stopping for lunch at Amado’s Longhorn Grill (just off I-19 at exit 48), which is fronted by a 40-foot-long plaster longhorn skull. You’ll walk through the nasal cavity to grab your grub, but don’t let the idea of eating beef inside a cow skull deter you from ordering the Sonoran Horn Dog or Longhorn Burger.

Matador’s murals: Continue south on I-19 to Nogales and the Hacienda Corona de Guevavi, whose walls were beautified by a bullfighter. Salvador Corona’s matador career was dashed in 1919 when a bull gored him in Guadalajara. “A friend brought him a paintbrush and said, ‘Use this as your sword. It takes courage and artistry to paint, too,’” innkeeper Wendy Stover says. Mexican art history lecturer Corinne Milton describes Corona as a master of 17th and 18th century costuming and says his work remains highly prized. Visit haciendacorona.com for directions before you go.

Flickering hope: From the Hacienda, head northeast on Highway 82 toward Patagonia. Just before mile marker 16, look right for stairs leading to lit prayer candles and small statues. As the story goes, a local couple named Juan and Juanita Telles carved out the shrine in the 1940s, pleading with God to bring their son home safely from World War II. He did. Locals revere the spot and pray for their children there. “To this day, the shrine remains lit day and night,” says Cecilia San Miguel, owner of Velvet Elvis restaurant.

Bookworm bliss: Next up: Singing Wind Bookstore, crammed into three rooms of Winn Bundy’s Benson ranch. Judging from the steady trickle of traffic, Kindle can’t kill this nook. “That thought doesn’t even enter my bailiwick,” says Bundy, who specializes in regional tomes. “The South and Southwest are our meat and potatoes. They always will be,” says the octogenarian, whose personal Dewey decimal system keeps her books perfectly organized – at least to her. From Patagonia, drive north to I-10, and travel east to exit 304. Drive north 2.5 miles on Ocotillo Road to Singing Wind Road.

Rattlesnake crafts: From Bundy’s bookstore, backtrack to Highway 80 south into Tombstone to Camino San Rafael. Cross Walnut Gulch Wash, turn right on Gleeson Road and proceed 13 miles until you see signs for Rattlesnake Crafts in Gleeson. John and Sandy Weber have spent 33 years catching rattlesnakes and turning them into unique sundries like snake jerky, fang necklaces, and snake-skin cell phone cases and belts. While license restrictions limit them to four Diamondback kills a year (back in the day, they caught four a night), don’t worry about product shortage. “We know how to cut them better to get more out of them,” Sandy says. 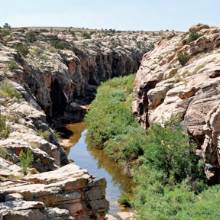 Northern Arizona
Petroglyph passion: Point your car north to Rock Art Ranch, an archaeological treasure trove southeast of Winslow that boasts ancient petroglyphs on its sandstone walls. Cattle rancher Brantley Baird leads guests down to a portion of Chevelon Canyon that runs through his property. Its interior is packed with rock art like the lady in a dress (dubbed “Cinderella” by archaeologists), an entire wall laden with hunting imagery, and numerous dancing men glyphs. Visit by appointment only. Call 928-288-3260.

Take it easy: Swing back out to Highway 87 north to Winslow’s Standin’ on the Corner Park, where muralist John Pugh’s trompe l’oeil windows depict “a girl, my lord, in a flatbed Ford” from the Eagles’ first single, “Take it Easy.” The early 20th century brick wall that holds the mural is part of a formerly vacant building that burned in 2004. The 15,000-square-foot hollowed-out space behind the wall soon will be a Route 66 neon park. Slated to break ground this spring, the park will feature an open theater styled after a 1960s drive-up diner and a sidewalk that traces the Mother Road’s route from Chicago to Santa Monica Bay.

One tall totem: Travel south one block to First Street and follow the railroad tracks west two blocks until a 30-foot totem pole commands the skyline. Part of artist Peter Toth’s “Trail of the Whispering Giants,” a project in which he carved a totem pole in all 50 states, the statue is dedicated to “the original citizens of Arizona.” Through Toth’s eyes, the intricate carvings are the composite of all the Native Americans in the state.

Twin Towers: Two rusted, steel girders stand watch over Route 66 near the junction with I-40 on Winslow’s eastern edge. Lifelong Winslow resident Dee Rodriguez was on the City Council in 2002 when a call went out from Governor Janet Napolitano urging cities to commemorate the anniversary of September 11. At that time, Rodriguez’s Weed and Seed Committee had the biggest surplus in the city budget: a whopping $300. “We were going to plant two Italian cypress trees and box cut them to represent the twin towers,” she says. Then cable TV intervened. “I was watching a show about how all the World Trade Center beams were going to be melted down at a waste plant,” Rodriguez says. She garnered local support, contacted the plant, and within days, two 14-foot World Trade Center girders were hitching a ride on a Wal-Mart truck bound for Winslow. The girders traveled 2,300 miles – almost one mile for every victim inside the World Trade Center North and South towers on September 11, 2001.