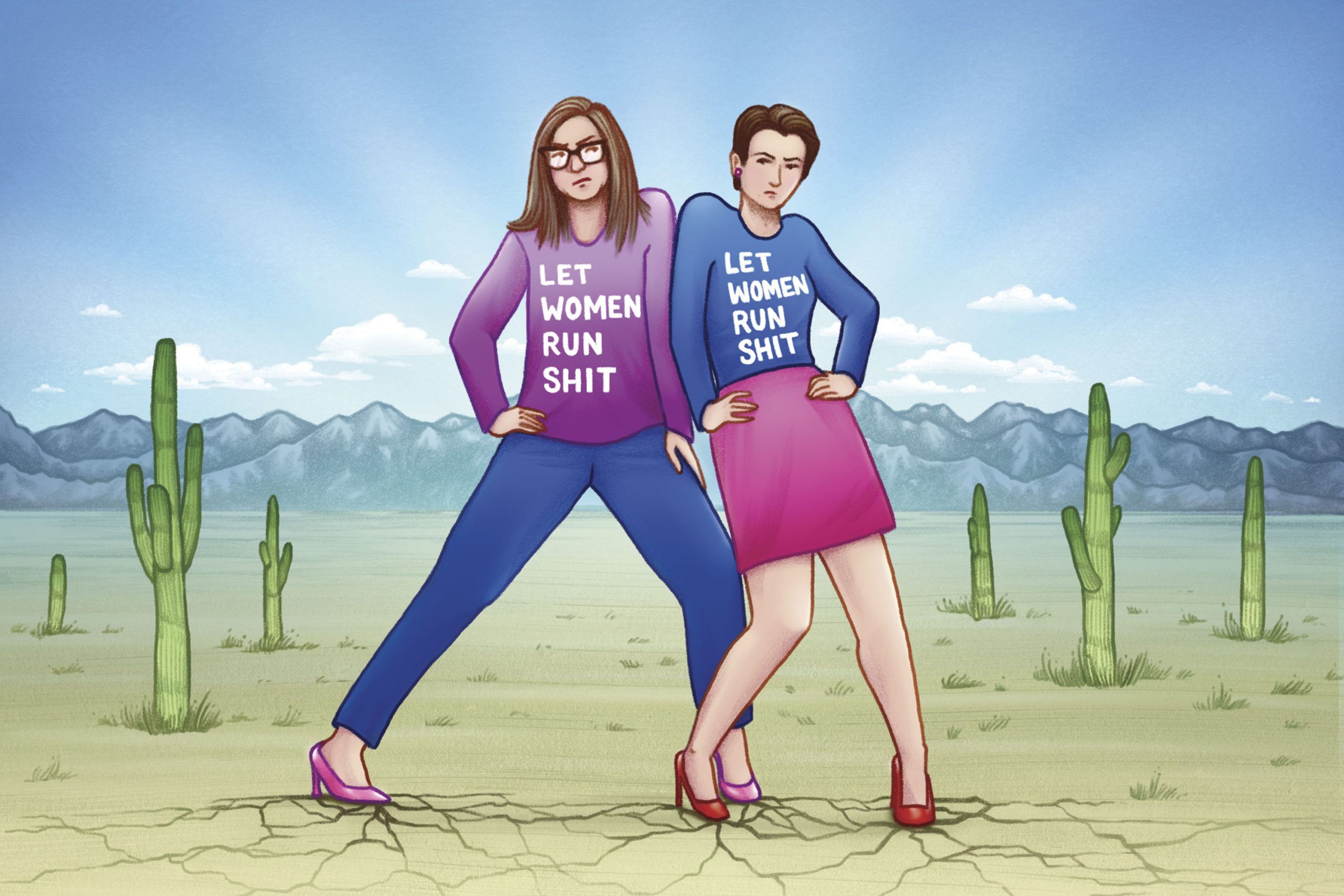 Arizona has an excellent track record electing women to office. But that alone is no cause for celebration.

It was unseasonably cool the week before November’s midterm election and we all got excited, scrambling to pull out long sleeves and closed-toe shoes. I ran into a friend at a local bookstore, pausing for a moment to consider the message on her sweatshirt.

“I know,” she replied, hanging her head. We observed an impromptu moment of silence. Or maybe it was just an awkward pause.

You know the story. The state of Arizona was in the throes of a particularly contentious race at the top of the ticket. One candidate was a Trump-loving former newscaster, a political newcomer – polished and a little too quick on her feet, she lashed out at other candidates, journalists and just about anyone else in her way.

The other, a moderate (liberal, by Arizona standards) one-time social worker with years of experience in public office, pretty much hid from her opponent, refusing any opportunity for a debate.

To be honest, it wasn’t a good look for either of them.

What got lost in the conversation was the fact that two women were vying for the state’s top office, and that’s probably because in these parts, women running for office isn’t a big deal. For better or worse, Arizona busted through that glass ceiling long ago. We’ve had a remarkably large number of women in public office for decades – including, now, five governors, the most of any U.S. state. (Most of which have been around much longer than Arizona. California, amazingly, has had zero.)

But I find myself wondering – does it even matter?

I’ve been trying to figure out how to write this column since Rose Mofford first stepped into office. It feels like that, anyway. It’s not like I’m not qualified to weigh in on this – I’m a woman. I was born in this weird, dusty, often backward place, and I’ve covered politics here for most of my adult life.

True, I have never held public office myself – but it’s not for lack of trying. (My final unsuccessful bid was for sophomore class treasurer at Arcadia High; the school newspaper wound up being a better fit.)

In any case, writing this shouldn’t be hard for someone who grew up in the ’70s with the mantra, “A woman’s place is in the House – and the Senate.” Raised on Marlo Thomas’ Free to Be… You and Me, Sesame Street and Ms. magazine. I even went to a women’s college.

Over the years, I’ve interviewed so many smart, interesting women in Arizona politics I’ve lost count. I wrote about how Democrat Rose Mofford brought much-needed sanity to the governor’s office after Evan Mecham and what a difference Republican Jan Brewer made in the lives of people with serious mental illness when she was in the legislature. In the late 1990s, I covered the Fab Five – when women held all the top offices in the state – and the Sue Nation, when moderate Republicans Susan Gerard, Carolyn Allen and others brokered reasonable deals (just about unheard of) in the state house.

So why is it so hard for me to write about how necessary it is for women to serve in public office?

It wasn’t till I saw my friend’s sweatshirt that I knew what I wanted to say.

OK, I said it. Phew. The thing is, it’s no secret. My friend knows it. Here in Arizona, we all do.

Women are not all that. No matter what your political position is, it’s likely you agree. We are no monolith, and the Arizona women serving in public office certainly demonstrate that – if nothing else.

American women fought for suffrage for decades, beginning in 1883. They got the right to vote in 1913, though some had to fight for decades to actually be able to cast a ballot.

For a long time, we’ve had notable women in office. Isabella Selmes Greenway was the state’s first congresswoman and one of the first nationally; she served in the mid-1930s and was a good friend of Eleanor Roosevelt. Democrat Polly Rosenbaum served in the state legislature for 46 years. Phoenix’s first female mayor, Margaret Hance, was elected in the ’70s. And the best-known woman in Arizona government, conservative Sandra Day O’Connor, served in the U.S. Supreme Court from 1981 to 2006.

Just because they were women doesn’t mean they had the same opinions on anything.

Today, ours is the home state of Kyrsten Sinema – and Karen Fann. Of Nancy Barto – and Katie Hobbs. Of Kris Mayes – and Wendy Rogers. Of Kari Lake, Alma Hernandez, Kate Gallego, Rachel Mitchell, do I need to keep going?

In a way, this is totally awesome. It means democracy is working. Women may not be equal to men yet (or ever), but we’re damn close. Close enough that we have as wide a range of political positions, styles and ethics as the men in Arizona politics.

Of course, the cynic in me has to ask why are there so many women in Arizona politics?

In a 2018 story in The Hill, Michelle Ugenti-Rita, then chair of the state House Elections Committee, said, “We have a cowboy mentality here. If you want to get involved and be active and engaged in your community, you can. We don’t have that many barriers to entry, so to speak.”

Maybe. But I also wonder if it has to do with what little respect we have for our elected officials. Running for and holding public office can be miserable. And sadly, the Arizona legislature, which is notorious for paying lawmakers almost nothing, tends to include a large number of women.

In any case, here we are.

We may still be doing everything backward and in heels, but we’re doing it. And messing up just like the men do. This is confounding to progressives who’ve expected women in public office to push for what have traditionally been considered female issues.

“I wish I could say women prioritized education, health care and housing policy,” says Stacy Pearson, co-founder of Lumen Strategies, a Phoenix-based political consulting firm. “But gender hasn’t risen above partisanship and here we are, dead last by many of those measures.”

She’s right. She’s always right. Pearson is the smartest person I know in Arizona politics and one of the smartest people I know, period. She’s the one who finally got Joe Arpaio out of office by hammering voters with the economic impact of the sheriff’s bad acts. She knew abortion would be “the” issue of the 2022 elections before most of the rest of us did.

But still, I grapple. Should we expect women to speak, act or vote a certain way simply because they are women?

I mean, how are women supposed to act?

It’s not a question we’ve ever asked about men. The answer is the same for both. However they freaking want to act. That’s how they should act. That’s democracy. It’s uncomfortable and messy and sometimes has very unfortunate outcomes.

It’s also the best we’ve got.