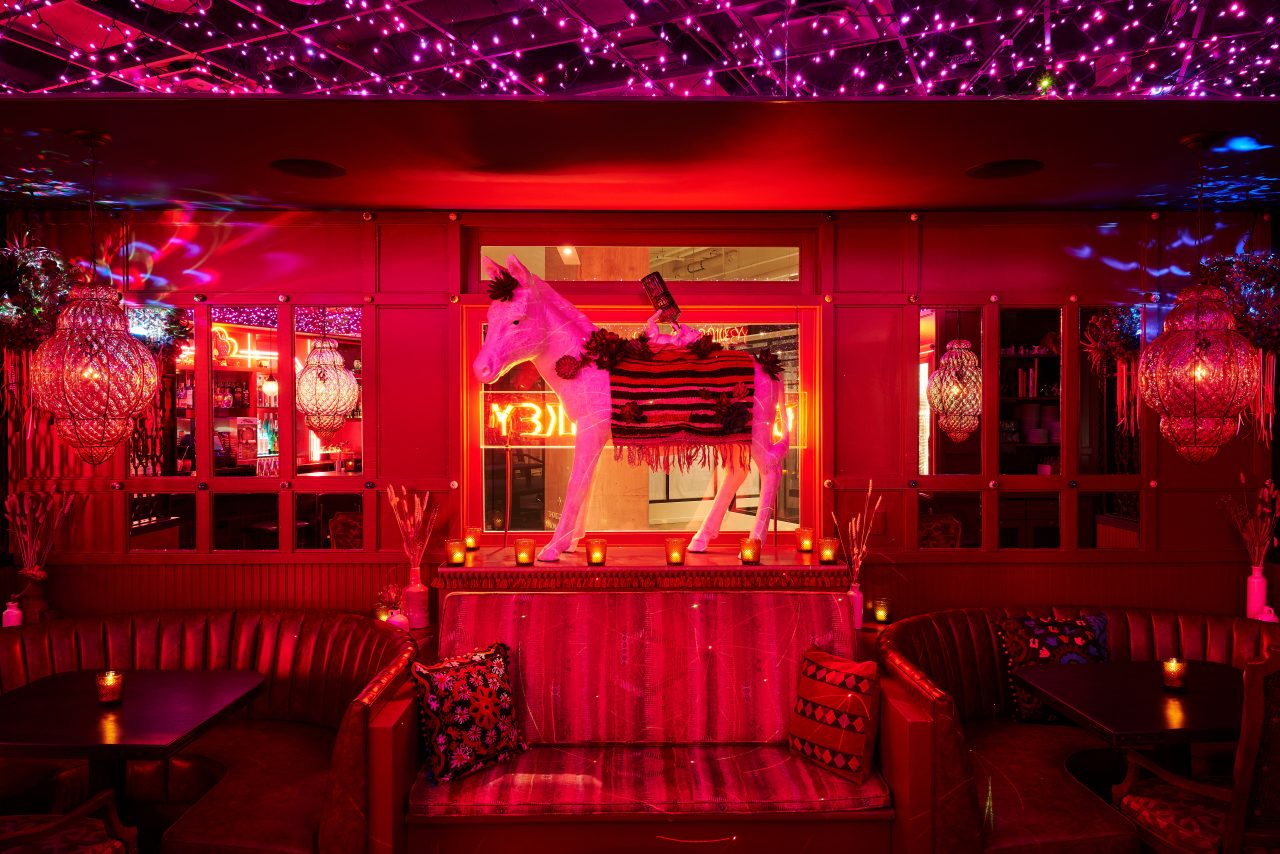 Upon walking into Ghost Donkey, a new cocktail concept in the heart of Roosevelt Row, you’ll first notice the twinkling ceiling lights and the crowd gathered around the bar. The bar is warm and welcoming, bathed in pink neon lights. Under the color-changing lights, you’ll notice funky décor, including a life-size donkey statue wearing a sombrero, that transports you to a summertime fiesta in Mexico. On weekends, Ghost Donkey and its sister establishments (Cham Pang Lanes and Palma) are buzzing and loud. On days and weeknights, the bar has a more relaxed and chill environment. When I went on a Friday night, it was busy and full of dancing patrons.

Bartender Melissa Owen says that she tries to create an interactive party atmosphere at the bar. Bartenders swing the hanging lights when it gets busy, and the ceiling lights change color to the music.

“By day you can learn about mezcals, then at night, it transitions,” Owen says. “The music will get louder, things will get more exciting, people will dance. It definitely gives a comfortable family atmosphere, like you’re hanging out at a Mexican party.”

Ghost Donkey serves mainly mezcal and tequila, plus cocktails. Ghost Donkey’s drinks are made with Sonoran ingredients like Mexican tequilas, agave syrup, mole spices, and roasted poblano peppers. It offers 11 signature cocktails as well as more than 65 types of mezcal and 40 types of tequila.

Ghost Donkey offers a small food menu alongside its massive drink selection. There are four kinds of gourmet nachos with house-made mole chicken, steak and beans, mushrooms, or chorizo. “Everything that we can, we source from Mexico,” Owen says. “We try to respect the culture.”

I tried the Burro Tropical cocktail ($14) which is a mix of Terralta Blanco Tequila, Real McCoy 3 Year Rum, Chinola Liqueur, Calpico, ginger, lemon, and soda. It’s fruity and intense, with a creaminess from the Calpico. It’s kind of like a punch, easy to drink, and served in a tall glass with a straw. Owen says the Mushroom Margarita ($15) (huitlacoche infused Montelobos Espadin, Nixta corn liqueur, agave syrup and lime) is one of the most popular drinks, so I tried that one, too. It’s made with huitlacoche, which is a fungus that grows on agave plants. The smokiness of the mezcal pairs well with the umami of the mushroom. The rim is salted with sal de gusano, which is made from the worms that live on agave plants. It sounds intimidating, but the sal de gusano was a delicious salty addition to the drink. Owen says this is seen as respectful, as it uses the agave plant as well as the fungus that grows on it and the worms that reside on it. This isn’t a typical fruity drink but more of a daring choice for those who want to try something new. Both of the drinks I tried were strong and delicious, with unlikely ingredients that work surprisingly well together.

The name of the bar refers to a legend in the Mexican agave fields. “In the fields when they would see a white donkey, they considered it a ghost,” Owen says. “it was good luck.” She adds that the theme is about respecting the donkeys that put in the work to make the alcohol. The bartenders are very knowledgeable about the menu and are happy to help you find a drink you like. Owen says the bar tries to be as authentic and respectful to Mexican culture as possible. The owners send bartenders to Mexico to learn about tequila from experts. “They try to really make it authentic. They really want us to learn and be passionate about it.”