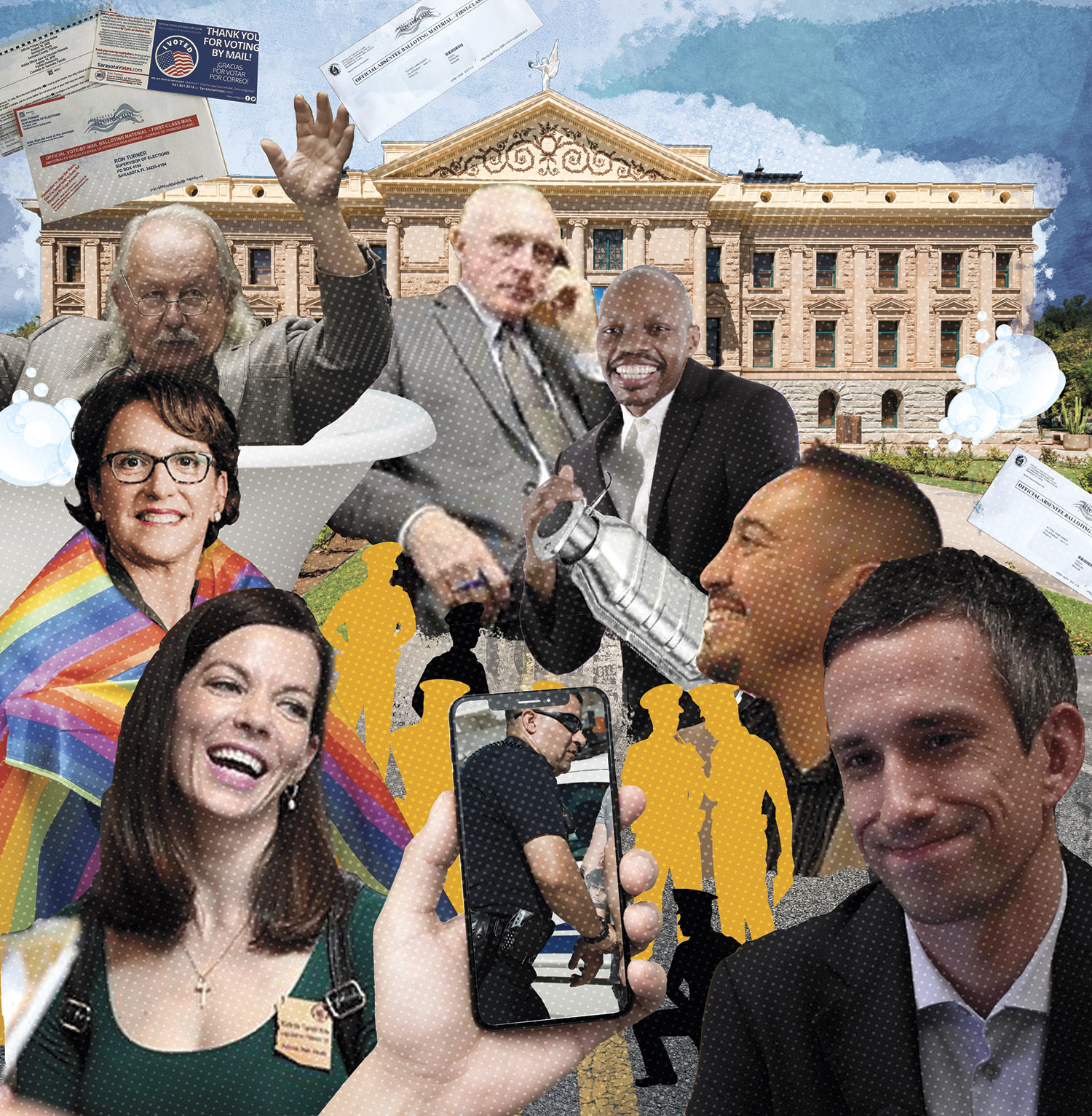 In their latest legislative confab, Arizona lawmakers clamped down hard on abortion, voting and catalytic converter thefts. Here are the post-game highlights.

To paraphrase Mark Twain, no man – or woman – sleeps well while the Arizona legislature is in session. At least, not if they’re moderates. With a slim majority, the GOP passed legislation on a variety of red-meat issues during the 2022 session, which wrapped up in late April.

Still, there were some welcome flashes of moderation and even occasional bipartisanship. Wonders never cease.

Playing footsie with the anti-government Oath Keepers militia and embracing the nativist “great replacement theory” on Twitter were not enough to make a pariah out of Arizona Senator Wendy Rogers with her fellow Republicans. But her virtual appearance before white nationalist Nick Fuentes’ American First Political Action Conference did the trick.

In a prerecorded speech, Rogers called for the building of “gallows” to “make an example of these traitors who’ve betrayed our country.” On Twitter, she dabbled in anti-Semitic tropes about “globo Satanic bankers,” called the Republicans criticizing her “Communists,” and promised to “personally destroy the career of any Republican” who participated in the censure.

Her colleagues, including Republican Senate President Karen Fann, rejected her “free speech” arguments, voting to censure Rogers 23-4. Sadly, the reprimand likely will only endear the Flagstaff Republican further to those who have donated $2.5 million to her campaign
coffers to date. Talk about failing up.
Status: Passed.

Everyone loves fireworks, save for dogs and car alarms, which is why previous state laws prohibited municipalities from cutting down on the hours your neighbor is allowed to set off those Roman candles in his backyard. But after years of complaints from pet owners and others, the legislature overwhelmingly approved a measure allowing cities and towns to ban fireworks from 11 p.m. to 8 a.m., with exceptions made for the Fourth of July and New Year’s Eve, when the prohibitions can start no sooner than 1 a.m.
Status: Signed by Governor.

Phoenix Police report a nearly 6,500 percent spike in catalytic converter thefts, with many Valley car owners waking up to find the exhaust emission control devices swiped from right underneath their vehicles, leaving them thousands of dollars in the hole and on a long waiting list given ongoing supply chain issues. Democratic House Representative Diego Espinoza’s HB 2652 seeks to crack down on the vibrant black market by making it illegal for a person to solicit, advertise or possess a catalytic converter, or the precious metals used therein, outside of normal, regulated commerce. The bill would also tighten reporting requirements on scrap metal dealers for the devices.
Status: Passed the House, awaiting floor vote in the Senate.

Americans have a First Amendment right to videotape the police in public areas, but Republican state Representative John Kavanagh wants to rein in that right by prohibiting a person from making a video recording of law enforcement activity “within 8 feet of where that activity is occurring,” unless the officer or officers in question give permission. If that sounds like a law written by a cop, you’re on target. Kavanagh was a police officer with the New York Port Authority for 20 years before moving to Fountain Hills. And he’s got the Village People-style ’stache to prove it.

Kavanagh first wanted the restriction to be 15 feet, but cut it down a bit after criticism from civil liberties advocates. He also added an exception, allowing those stopped by a cop to film the encounter, as long as they don’t interfere with any “lawful police action.” Still, the law is guaranteed to be challenged in court and end up costing taxpayers in the long run. But that’s no skin off Kavanagh’s flinty nose. It’s not like the cost of defending the proposed statute will be deducted from his Port Authority pension.
Status: Passed House; awaits floor vote in Senate.

Proof of citizenship to vote has been required by state law since 2004, when Arizona voters passed Prop 200. But in 2012, the U.S. Supreme Court found that federal law, specifically the 1993 National Voter Registration Act, preempted that state law when it came to congressional and presidential elections. The feds have their own voter-registration form, which allows voters to cast ballots in federal elections, only without the same ID requirements as the state. Opponents say the measure will cause confusion at the polls and lead to some eligible citizens being denied their right to vote. These critics also say the effort is doomed to failure because of the previous 7-2 verdict of the Supremes.

But Republican lawmakers, many of whom openly espouse former president Donald Trump’s discredited “stop the steal” conspiracy theory, insist the statute is necessary, even though there’s no proof widespread fraud occurred in 2020. It could be worse. More than a dozen other election-related bills, inspired by the cataclysmic 2021 Cyber Ninjas “audit,” were killed in the legislature, largely when Republican Senator Paul Boyer decided to buck his caucus and vote “no” on them. Count your blessings, voters.
Status: Signed by the Governor.

Mirroring a Mississippi law now before the U.S. Supreme Court, SB 1164 prohibits a physician from performing an abortion after 15 weeks of pregnancy, save in the case of a medical emergency. A doctor performing the procedure could face a class 6 felony and the loss of their medical license.

The bill, which passed along party lines, is unconstitutional under the 1973 Supreme Court decision in Roe v. Wade, which generally forbids restrictions until the end of the second trimester of pregnancy, or about 24 weeks, when a fetus can live outside the womb. The law’s proponents believe that the new conservative majority on the Supreme Court is poised to uphold the Mississippi law, and perhaps even overturn Roe altogether. During debate, Democratic Senator Raquel Teran decried the lack of exceptions in the bill for rape and incest. But the bill’s sponsor, Republican Senator Nancy Barto, was undeterred, saying, “The baby inside of a woman is a separate life and needs to be protected.”

Ironically, recent polls have shown that a majority of Arizonans oppose further restrictions on abortion rights.
Status: Signed by the Governor.

Around 1.4 million adults in the U.S. – around 0.6 percent of the adult population – identify as transgender, according to a 2016 New York Times report. And yet their existence continues to be a source of peculiar obsession with Republicans in the Arizona Legislature, who recently passed two new restrictions targeting trans youth.

SB 1165 is a slightly less onerous version of the failed 2020 “show me your genitals bill” that would have forced athletes to present a signed physician’s statement affirming their gender. Cutting to the chase, the new bill states that sports teams for biological women or girls “may not be open to students of the male sex.”

“Competitive fairness” is ostensibly the force driving this law, and in the wake of transgender swimmer Lia Thomas’ trouncing of her competition in the recent NCAA Division 1 swimming championships, maybe that’s a discussion to be had. But in Arizona, on the high school level, where no such controversy is on record, the whole thing just seems vindictive.

Meanwhile, SB 1138 prevents a doctor from providing “irreversible gender reassignment surgery” to anyone under 18, which was characterized as “common sense” legislation by Ducey. Problem is, the supposed epidemic of under-18 sex surgeries has been debunked by such fact-checking orgs as Politifact, which found last year that gender reassignment surgery is normally available only to those 18 and above in the United States.

So why target trans youth? Ducey seemed to hint at the reason when he dodged reporters’ questions about whether trans people actually exist. He later affirmed that they did exist, but you get the sense some of his colleagues would rather they did not.
Status: Signed by the Governor.