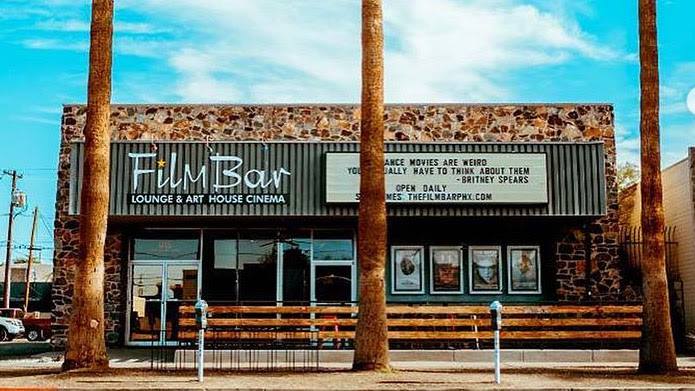 Many of us will remember FilmBar fondly as the place to see marginal but fascinating stuff that even Harkins would be unlikely to book. From Rainer Sarnet’s exquisite black-and-white Estonian fairy tale November to an afternoon screening of the John Landis monster spoof Schlock to the Monkees movie Head to a montage, by “The Unfathomable Film Freak Out,” of ’70s-era William Shatner TV appearances, it was never just another day at the movies.

But for its devoted, passionate habitues, FilmBar also earned a reputation that went well beyond what was on the screen. A few of these “FilmBar Freaks” and their friends shared with us some of their favorite communal memories, so here, very tentatively, are some picks for the Top Five Memorable FilmBar Moments:

5. Rocky Horror, of course: Travis Herrold recalls, “I really enjoyed FilmBar for some of its unexpected craziness. I showed up one night [in 2016] thinking I’d be able to buy a ticket for their Rocky Horror Picture Show screening, but it had been sold out by a birthday party. I stayed and instead drank at the bar. After a couple drinks the bartender said I was fine to go in to the theater and check it out. I ended up having a blast with the birthday party, dancing and singing with the group…I made some friends that night and had the wonderful, kooky time you typically had at FilmBar.”

4. Filmmakers’ anti-piracy stalking of their own movie: At a 2015 screening of rock documentary The Seeds: Pushin’ Too Hard, Seeds buff Dave Gofstein remembers, “The director [Neil Norman] and the producer [Alec Palao] were there at the show; they said they were following the movie around to all of its showings to make sure it didn’t turn up on YouTube.” Maybe they were too vigilant: “I’ve never seen it show up on Netflix or any streaming service, and I’ve looked.”

3. The 2017 Oscar Watch Party: Remember? Henri Ng sure does. “The Oscar watch party with the snafu with Moonlight and LaLa Land. That was one of my favorite memories. A lot of jaw dropping and yelling at the screen.” The evening rivals another of Ng’s favorite moments: “Watching the World Cup with France beating Croatia. FilmBar is a great place to watch soccer too.” His use of the present tense is poignant.

2. Pandemic partying: From Will Johnson: “I’m not sure it counts as a singular event but during the height of the pandemic, the FilmBar community rented the theater out a bunch and a small group of us would get together to watch some crazy stuff as a little community. It was like a five or six month period and there was about ten of us ‘regulars’ enjoying everything from Giallo horror to Jackie Chan films to strange double features put together by Michael Fett.” Johnson also notes that “the weekly BS Movies podcast shows were a blast. Usually always sold out, and great bunch of characters would gather to see the screening and podcast recording.”