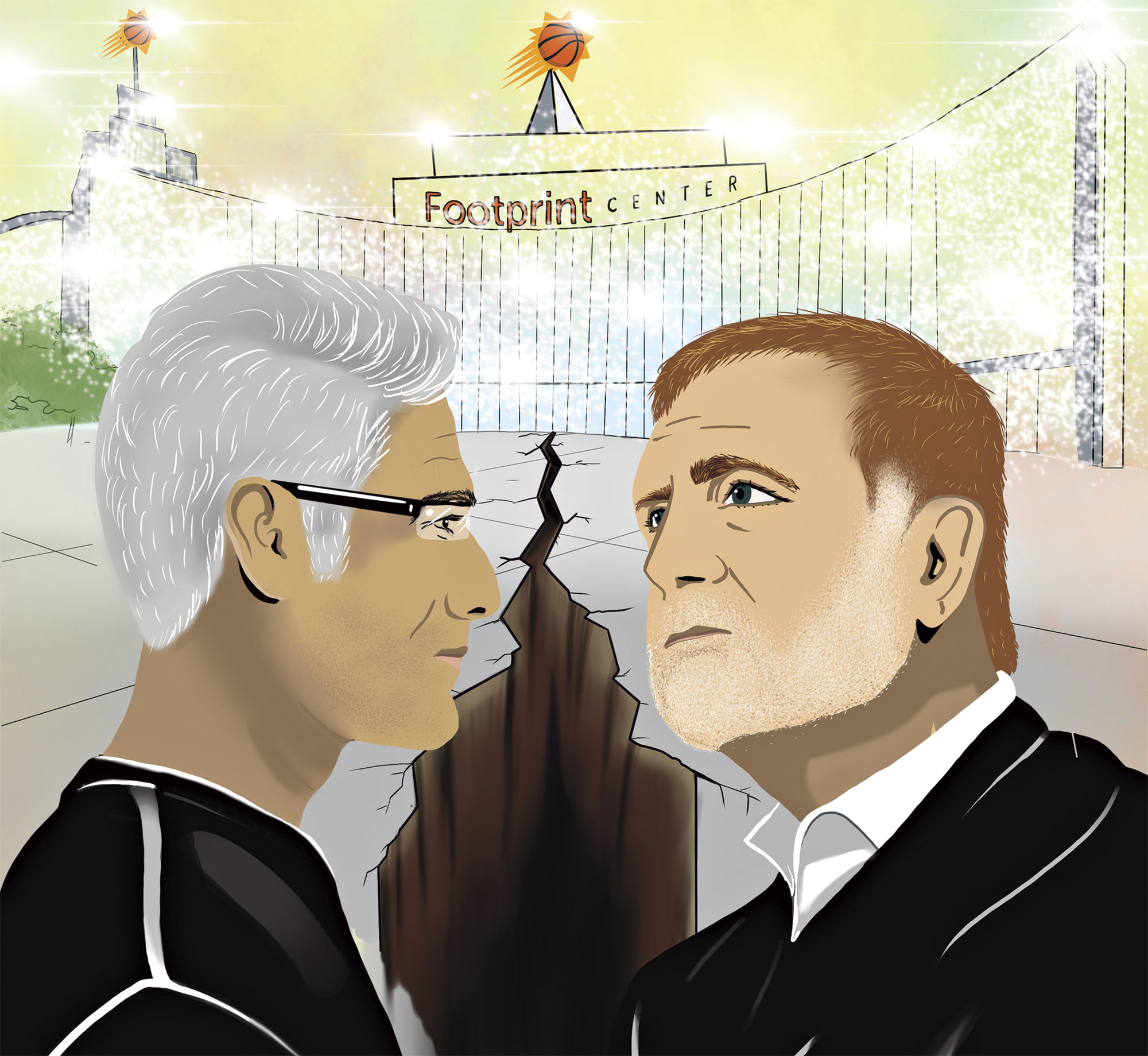 With an owner in the #canceled seat and a franchise on the rise, the Phoenix Suns ownership group braces for a power play – and mounting scrutiny from a newly progressive NBA.

At the November 6 Phoenix Suns home game against the Atlanta Hawks, team owner Robert Sarver was nowhere to be seen at Footprint Center – not to anyone’s great surprise.

It had been just two days since a scathing ESPN report dropped, detailing alleged incidents of Sarver using racially charged and sexist language during his 17 years with the organization, culled from interviews with current and former Suns employees. The same day, the NBA announced it would investigate the conduct of both the managing partner and the Suns organization, prompting a denial of the allegations from Sarver and a statement of support signed by members of the Phoenix Suns and Phoenix Mercury ownership group, including such high-profile names as Arizona Cardinals receiver Larry Fitzgerald and real estate and banking moguls Steve Hilton and Byron Roth.

One notable person who didn’t sign the statement was sitting courtside at the game, however: Jahm Najafi, the Suns’ co-vice chair and its second-largest investor. An Iranian-born, Harvard-educated private investment billionaire who lives in Arcadia with his wife, lifestyle guru Cheryl, Najafi had recently told the Associated Press he was inspired by the racial justice protests of 2020 to devote his philanthropy to “diversity, equity and inclusion.” After the ESPN bombshell, Najafi issued his own statement on Sarver, saying in part, “The conduct he is alleged to have committed has stunned and saddened me and is unacceptable.”

If attendees didn’t notice the gray-haired businessman sitting courtside that night, they surely spotted his guest: Colin Kaepernick, in full spherical Afro, seemingly there to underline Najafi’s ideological split with Sarver. (The activist-athlete and Najafi previously teamed up in February 2021 to launch their own acquisition company, Mission Advancement Corp., offering blank checks to businesses generating “a positive social impact.” Targeted for $250 million, the IPO later closed at $345 million.)

The sight of Kaepernick rubbing shoulders with Najafi so soon after the allegations sparked immediate speculation that the team’s second-largest owner was purposefully setting himself apart from Sarver – and possibly making a play for control of the team.

That theory, however, is not without merit. Beyond merely painting the words “Black Lives Matter” on the courts of the NBA “bubble” in summer 2020 following the protests over the killing of George Floyd, the league – whose pool of athletes, Sports Illustrated pointed out, is 75 to 80 percent Black on any given season – has put real money behind what for some companies has been progressive posturing. In August 2020, the league launched the NBA Foundation, pledging contributions from all 30 NBA teams toward grants to nonprofits driving greater economic empowerment and career advancement for African-American youth.

The Suns pledged $10 million to the foundation. Najafi committed another $10 million of his own.

“His experience of being an Iranian immigrant in the ’70s and being the target of racial slurs himself is why he’s so personally invested in these issues,” says Najafi’s Phoenix-based publicist, Alissa Manzoeillo (Najafi declined to comment). “This isn’t a flyby thing for him.”

Via such messaging, Najafi appears to be positioning himself as an optics-friendly alternative should the league’s investigation determine that Sarver’s behavior violated the NBA’s constitution and bylaws. Terminating an owner for such violations requires a three-fourth’s vote of the NBA board of governors, but it’s not unprecedented: Over the past seven years, two investigations involving owners accused of making racist comments – former L.A. Clippers owner Donald Sterling and former Atlanta Hawks owner Bruce Levenson – resulted in the sales of the teams. Sarver’s reported transgressions, which he characterized as “vague suggestions made by mostly anonymous sources,” so far lack the smoking gun audio evidence that befell those owners. He also appears to have the support of the team’s current personnel.

“None of what’s been said describes the Robert Sarver I know, respect and like – it just doesn’t,” Suns general manager James Jones said after the allegations surfaced.

Whether past personnel agree remains to be seen: On December 10, ESPN reported that former team employees were being released from their non-disclosure agreements to speak with the league’s lawyers, Wachtell, Lipton, Rosen & Katz – the same firm that took down Sterling.

Clearly, the controversy has created a schism in Suns ownership that Najafi looks willing to exploit. While Sarver’s statement was signed by 12 of the team’s 18 owners, including co-vice chairs Andrew Kohlberg and Sam Garvin, a source who works with Najafi and spoke to PHOENIX on the condition of anonymity dismisses many of the names on the list as “basically glorified season-ticket holders.”

“Sarver owns about 35 percent of the franchise, and then Jahm is the second under him,” says the source. “Under them are the other vice chairs, and then the remaining minority owners, who each go to one meeting a year and that is basically their interaction with the Suns management. One thing to know about that list of owners who signed the statement in support of Sarver is they pretty much all have personal or financial relationships with Sarver outside of the Suns franchise. One is Sarver’s lawyer and another one’s involved in his kids’ trust fund, so the list is mainly people who do real estate deals or have a financial interest in  Robert Sarver.”

International investment firm Dyal Capital Partners, which recently bought a 5 percent share in the Suns through a deal that valued the franchise at approximately $1.55 billion, joined Najafi in refusing to sign the support statement. Jahm’s older brother Francis, CEO of Valley investment firm Pivotal Group, was another early Suns investor following Sarver’s 2004 buyout. Could these prominent members of the Suns royal court quietly be plotting a palace coup?

Arizona sports fans have seen minority owners mutiny before. Jerry Colangelo, who had been the Suns’ first general manager prior to spearheading the effort to bring the expansion Arizona Diamondbacks to Phoenix in 1998, was deposed in this manner. In 2004, he was forced out of his managing partner role with the Major League Baseball team by a group of disillusioned investors as the D-backs floundered under high startup costs and ballpark cost overruns – this, despite the fact that Colangelo’s management delivered the city its first major sports championship title with the 2001 World Series.

Since Sarver owns less than half of the team, a majority of co-owners could vote for him to step down, but making that happen could be difficult. ESPN’s report stated that certain minority owners had previously explored having Sarver removed on other grounds (the report did not name the reason), but found “Sarver’s contract effectively prevented him from being removed absent serious criminal behavior or similarly egregious conduct.”

The conclusion of the NBA’s investigation – no timetable has been given – could bring other mutineers out of the hardwood if hard evidence of that “egregious conduct” emerges.

“There are still minority owners who have not said anything either way,” Manzoeillo says. “That may change once the investigation wraps up.”