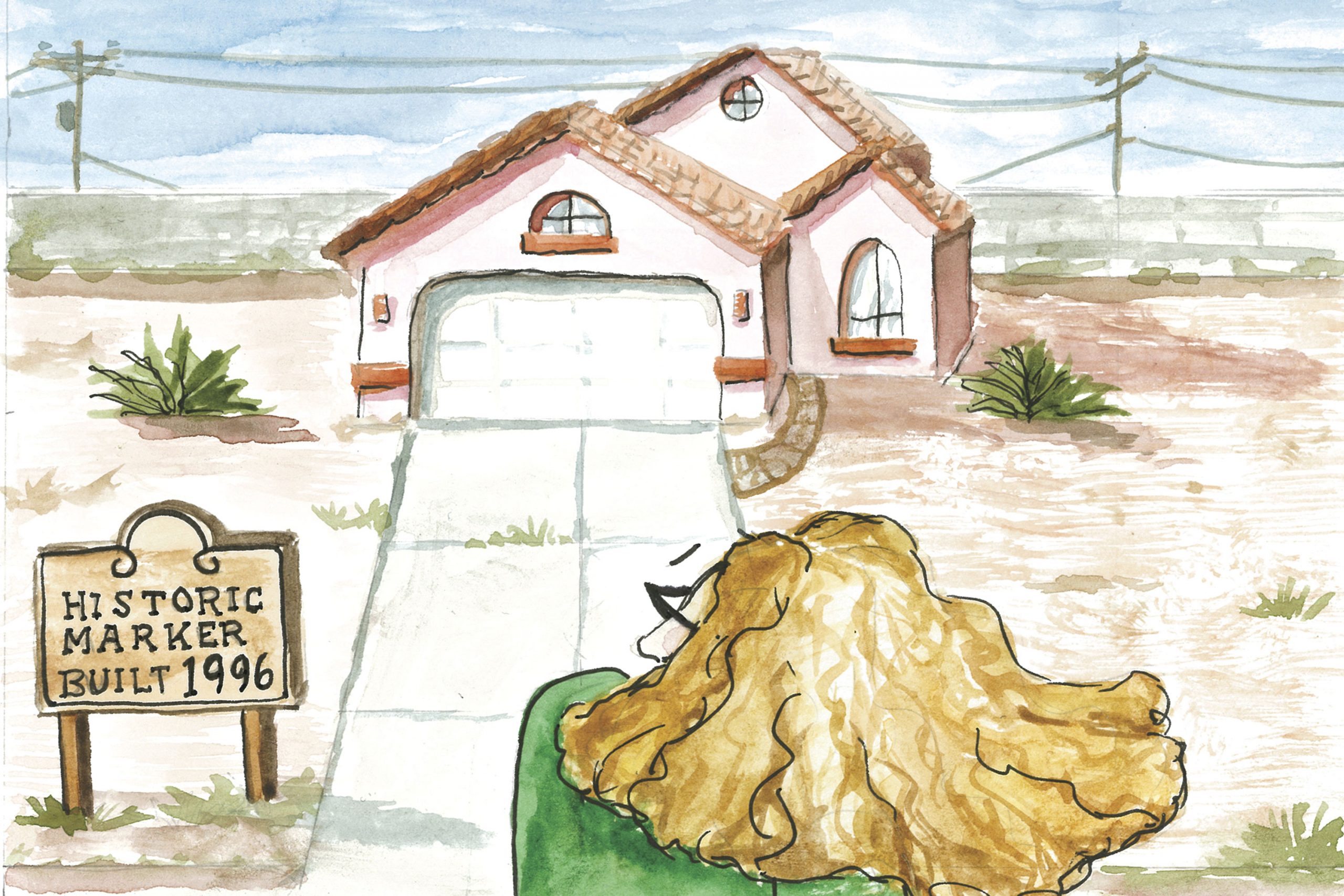 Will today’s cookie-cutter Valley tract homes be worth preserving when the time comes?

I flew back into Phoenix on a clear morning this past November from an out-of-town trip, the first time I’d been on an airplane since early 2020. A nervous flyer, I don’t typically look out the window. But something compelled me to lift the shade as we approached the Valley. Above the outskirts of my hometown, the subdivisions came into view – tight, curving rows of pink stucco-ed houses, each just the same as its neighbor –  and suddenly, I had questions.

What will happen when these homes are old enough to be considered historic? Will we scramble to save them? Will they be worth saving?

It’s no secret Phoenix has a horrible track record when it comes to appreciating anything old – even the good stuff. Arizona has long been known as the Do-Over State, where you can find a fresh start and 1,800 square feet of clean walls and new carpet.

Probably because I was born and raised here, when I first bought a house, I looked for something that reminded me of other places – frankly, of any other place. My soon-to-be-husband and I landed in a Tempe neighborhood lined with bungalows, ranches and the modest Craftsman we’ve lived in for almost 25 years.

Built in 1948, this house would not be considered old in any other place – but here it’s ancient. The closets are tiny and there’s no master bedroom, but I was sold on the hardwood floors, screened porches and landscaping that belongs in the Midwest. Over the years we’ve added Mexican tile, citrus trees and a cactus garden, making the place a confusing mishmash that could only be ours.

A friend who’s a development attorney in town recently warned me that when and if we ever sell our house, the buyer will immediately tear it down and build something new.

“Then we’ll never leave,” I told my friend. They’ll have to pry my cold, dead hands off the crumbling midcentury tile in my crappy bathroom.

Teardowns are incredibly common in these parts. But there’s a growing number of exceptions. Slowly, an appreciation is building for adaptive reuse, a celebration of solid structures and unique architectural details from the last century.

But was it too slow in coming? Have we already knocked too much down? By the time we as a city really understand the value of preservation, will the little pink houses in their giant gated subdivisions be all that’s left? And then what?

I consulted an expert.

Marc Neveu heads the architecture school at Arizona State University. He’s fairly new to the Valley and is still a little incredulous over the fact that the city of Phoenix didn’t have a historic preservation policy before 1985.

Still, he’s got hope. “I think there’s more of an awareness now than ever before,” he says. “People’s attitudes toward preserving important works of architecture and places has actually gotten better.”

Absolutely. But while there’s still much worth saving here, what about the future? What about the little pink houses? Will the Valley be ringed one day by protected subdivisions – Ye Old Anthem Historical District? – à la Willo, F.Q. Story and other beloved historical neighborhoods?

“They’re so cheaply made, and the development cost is such that economically, it makes sense to tear them down instead of preserve them,” he says of the homes, often referred to as cookie cutters.

I get it. But I don’t have to like it. While I won’t mourn the actual structures, maybe this conversation should really be less about houses – and more about the people who live (or lived) in them.

The outside might be bland and the construction a little flimsy, but inside, these dwellings can still hold the pieces of domesticity unique to their inhabitants – a comfy old recliner, the dining room that hosted dozens of family gatherings, a door jamb bearing the pencil marks documenting a growing kid’s height through the years.

In the end, the thing that really sold me on our house wasn’t the built-in cabinets or the pretty window moldings. One summer evening I drove by to make sure the for-sale sign was still up (it was) and caught a glimpse through the window of the owners – a mom, a dad and two kids – sitting around the dinner table. That’s exactly what I want, I thought.

When she turned over the keys, the woman got teary. “We raised our kids in this house,” she said.

The family barely left a trace. Years later, as my husband and I were raising our own daughters in the house, I found a souvenir mug from a bar mitzvah in the very back of a kitchen cabinet. There’s still a “Neighbors for Peace” sticker on the front window. I’m not sure where the mug went, but I’ve never tried to scrape off the sticker.

Some things are worth saving.