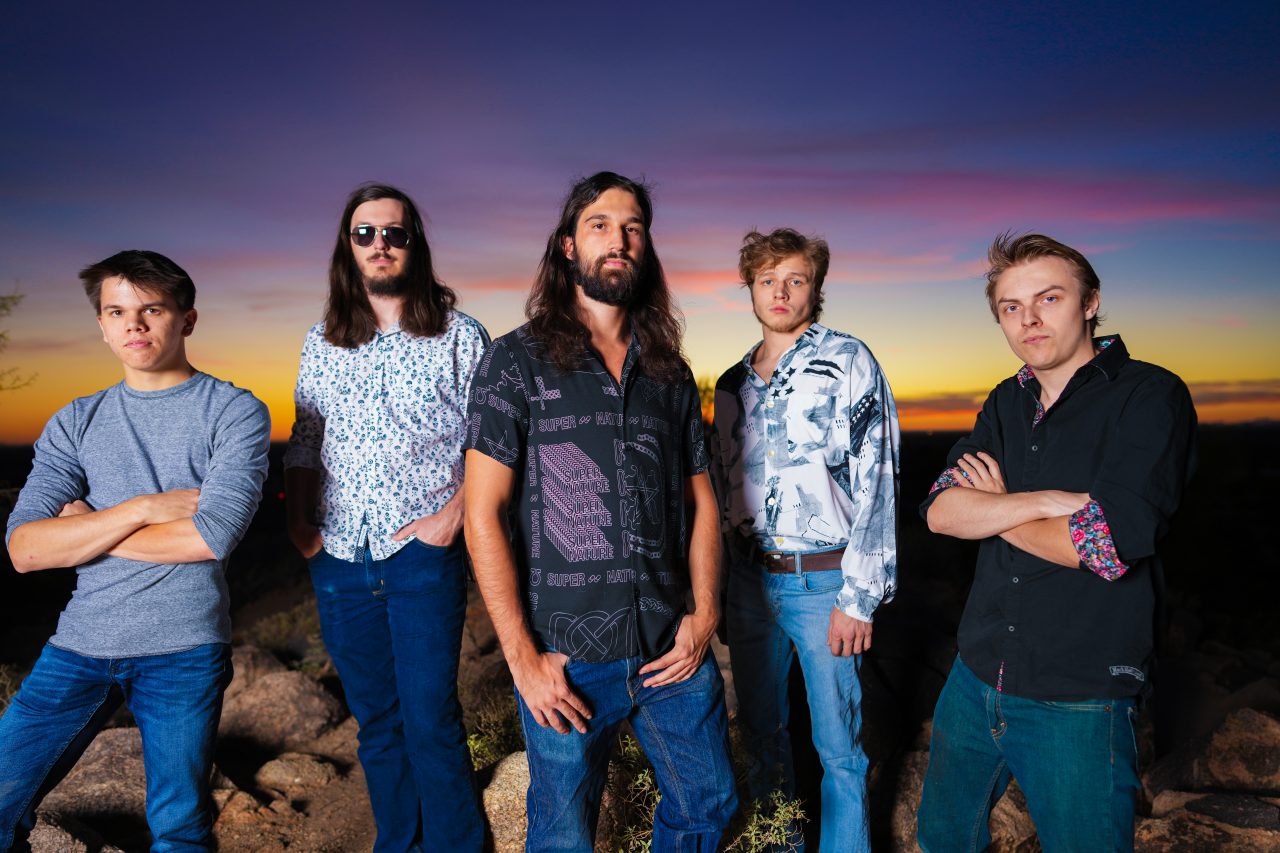 When Josh Browning was playing in his high school jazz band, he had no idea that he would eventually form a rock band of his own, become a finalist in Alice Cooper’s Proof is in the Pudding competition and ultimately produce a Christmas song with Grammy-winning, multi-platinum producer Mikal Blue. We sat down with the Palomas guitarist, who provided insight on the inspiration behind “Missing Mistletoe” and what the Tempe-based band, which also features lead vocalist Joe Gonzalez, vocalist and guitarist Sam Otterson, Dane Hess on bass and Victor Sese on drums, has in store for 2022.

How did Palomas come to be?
I actually went to high school with Victor. He was two years below me and we were in the jazz band together… We already had that sort of mutual relationship. At one point, I just asked him… if he wanted to be in a band together. He already had a band with Joe and Sam.

How would you describe Palomas’ sound?
Each member of the band contributes their own musical history and tendencies to the band. We have the classic rock foundation, but it’s also got a contemporary flavor to it as well due to the influences of the band members… along the lines of Arctic Monkeys or Red Hot Chili Peppers.

The band was a finalist in Alice Cooper’s Proof is in the Pudding, what was that experience like?
It was a lot of fun. It was awesome to receive all the feedback we had from the judges. Obviously they’re all musicians [and] professionals in their fields, so it was really neat to receive that feedback and kind of improve upon our sound as we were going throughout the competition. It happens in four stages, so after each stage we were able to adapt and design the music to the crowd’s liking.

What influence did that experience have on you as a band? Did it change the way you operated?
We developed and learned how to focus on presentation as a band, that is equally if not more so as important as the music at times, especially as a performing band and not just a studio band. So I would say that was a very strong takeaway that we had from the competition.

You were also featured on a show called The Recording Artist. How did that come about?
I believe the drummer’s father had reached out to Otto, who is the owner of the show. So we had that meeting, we were able to meet him and we were able to be on the show… Shoutout to Otto.

What was it like to be on TV?
It was great. If you’re not familiar, the show’s format is that you invite a band along and… they try to record a song in a two-hour time limit, they see how far you can get along, and it kind of teaches audiences about what musicians have to do behind the scenes in the studio. For ourselves, it was awesome. We were proud to see how quickly we could produce a record. Everyone was very friendly.

Does the band have a typical process or way that you start to make new music? Typically either me or Sam, the other guitarist, will kind of come up with a riff. We’ll usually do it in pairs, and then it will get passed along to each band member. Then, Dane, the bassist, will put down a bass groove. Then, Victor, the drummer, will come up with a drum groove and Joe, the singer, will write lyrics and a vocal melody. The really neat thing is that we can all contribute to the process, it’s not really one person finalizing the song from start to finish, we’re all kind of morphing it as we go along. Everyone gets to contribute. No one person gets to dominate necessarily when it comes to the songwriting process. I think that’s what gives us a unique sound.

Your new song “Missing Mistletoe” just came out. What inspired this song and what is it about?
Well, it’s a Christmas song first and foremost. We had to write a Christmas song for Alice Cooper’s competition, so we decided to write our own Christmas song. It’s a bittersweet song… about Christmas which is, at times, a celebration but it’s also about a lost girlfriend… love lost.

Mikal Blue produced this song. What was it like working with a Grammy winning producer?
It was great. He’s got a nice studio out in [Los Angeles]. He has a lot of really neat things in there. We got to take pictures with [Fleetwood Mac’s Rumours producer] Ken Caillat and we saw the same mixer that they had used for that. It’s kind of like a playground for musicians. There’s a little Xbox in the corner, there’s a TV, and you get to hang out with other musicians and stuff like that.

How did you originally connect with him and get the opportunity for him to produce this song?
We’re friends with Phoenix local Glen Crimson, he was in a band called Box of Cherries back in the ’80s or ’90s, and they’re good friends and so we were afforded the opportunity through him and we are grateful to have met these consequential people.

What do you all as a band hope to accomplish in the next year, musically and personally?
We intend to release other singles pretty soon. We’ll probably release a full album toward the latter third of the year, and just see the music grow, take on bigger gigs, maybe tour Arizona or California.

Are there any upcoming live performances for the band?
Yeah, we’re in touch with the band coordinator of the Marquee [Theatre in Tempe] and so we’re intending to play there very soon as spots open up. I think it should be around the corner, January maybe February.