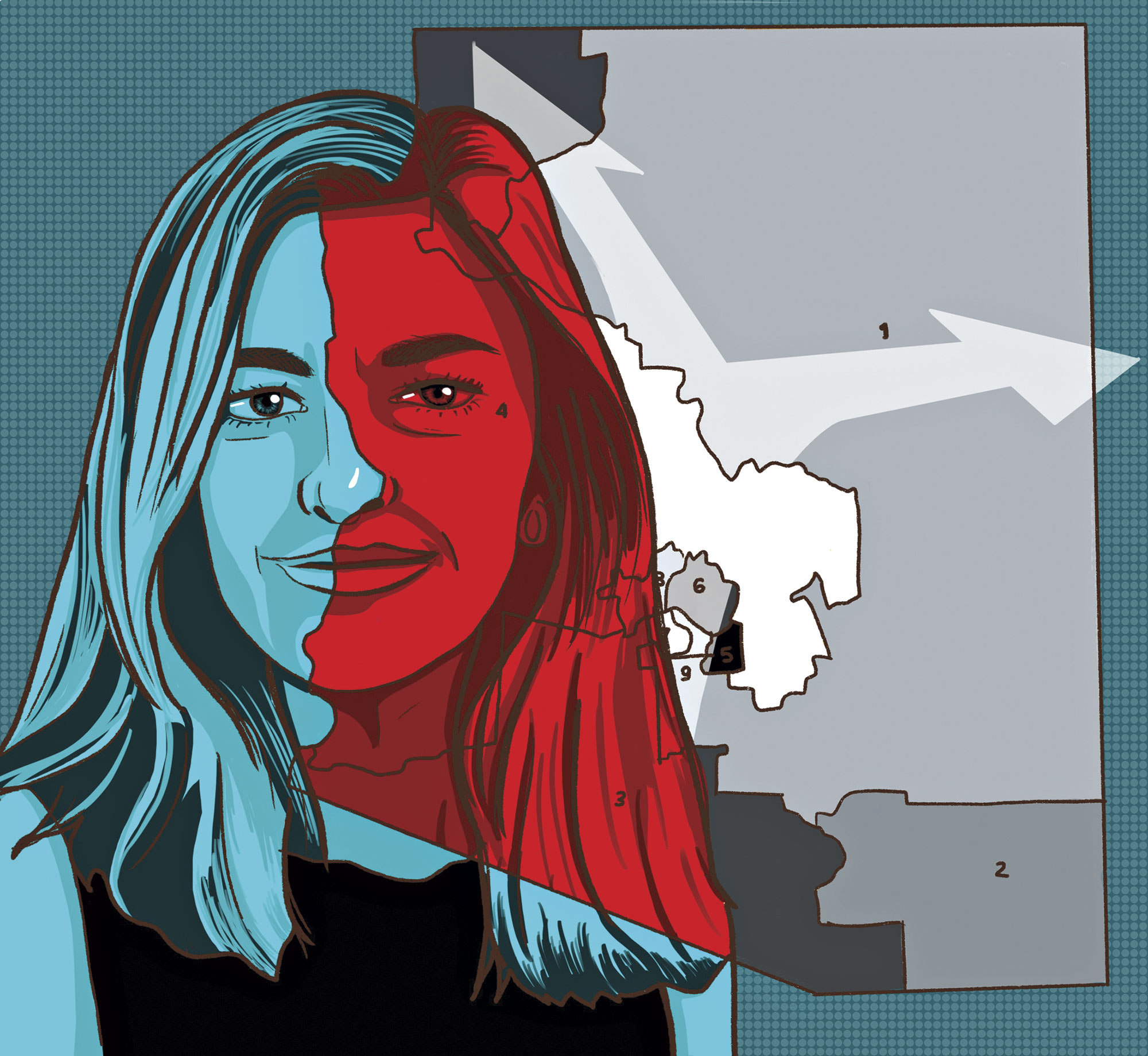 Until the state’s new voting district maps are approved, the most powerful person in Arizona politics may be a spotlight-shy Chandler psychologist with ties to neither party. Can Erika Neuberg remain nonpartisan?

“Bruce Springsteen, Neil Young, The Who,” the Chandler psychologist quickly rattles off, with the enthusiasm of a boomer dad setting up his first Spotify profile. Not that all her musical tastes skew incongruously male. “I also love Whitney Houston and the music on the new Cinderella soundtrack.”

Coming from anybody else, that’d be simple small talk – offhand replies to an off-the-subject question asked to round out a personality profile. But as the newly elected, nonpartisan chair of the citizen-led Arizona Independent Redistricting Commission, the five-member panel responsible for redrawing the state’s congressional and legislative boundaries following each once-a-decade census, even Neuberg’s streaming choices are fodder for partisan zealots eager to place the self-proclaimed independent on either side of the political divide. Springsteen? Neil Young? Gotta be a leftist.

“Aha! But then I also listen to The Dispatch, which is a conservative podcast,” she counters, with a laugh. “And then I’ll watch Morning Joe,” she says, referring to the MSNBC show considered to have a liberal bias. “I very much like to get into the heads of people on different sides – you’ll learn a lot that way. So I’m totally fine with everybody digging deep and trying to make sense of whatever they come up with on me. Honestly, there’s nothing to find!”

Sandwiched between two Republicans and two Democrats, the chair of the IRC, as established by voters in 2000, is required to be an independent, and often serves as the tie-breaker in deciding how to slice up the state into “fair and equal” Congressional voting districts. Not surprisingly, that puts the chair under special scrutiny whenever either party senses some district gerrymandering giving unfair advantage to the opposition – a practice the body was designed to avoid.

Previous IRC chair Colleen Coyle Mathis knows all too well the hazards of being in that hot seat. In 2011, then-governor Jan Brewer accused Mathis of repeatedly siding with the Democrats and removed her from the commission. The U.S. Supreme Court voted unanimously to reinstate her – but not until after she’d received so many threats from the right that the Tucson business consultant found it necessary to board up the windows on her home and seek protection from the FBI.

“I didn’t think the political environment could get any more heated than it was then,” Mathis says. “But then this past decade went by, and now it might be even worse.”

So far, Neuberg has built a track record of balanced bipartisanship that almost appears to have been premeditated to land her the unpaid commission post. Her campaign donations have gone to politicians on both sides of the aisle: Ruben Gallego, Ann Kirkpatrick and Kyrsten Sinema on the D side; Doug Ducey, Debbie Lesko and even Paul Gosar on the R’s. The bewildering both-sides-ism has prompted mostly confusion from those perched to attack her. “Her donations are all over the place, especially over the past decade,” says one contributor to the Republican-leaning blog RRH Elections. “My biggest concern is her sanity.”

Neuberg insists her paradoxical campaign donations were made solely to draw the attention of elected officials toward her one political advocacy, American-Israeli relations. Her late father, Eugene Schupak, was a major contributor to the American Israel Public Affairs Committee (AIPAC) – one of the few lobbying organizations that consistently receives bipartisan support (both Hillary Clinton and Donald Trump spoke at its 2016 conference, and its bills before Congress are always jointly sponsored). Growing up, Neuberg says it wasn’t unusual to have both John McCain and Gabrielle Giffords over for dinner.

“Just having the experience of seeing government work, seeing compromise, and seeing the ability to advance issues in collaborative ways really inspired me,” says Neuberg, who carries on her father’s work by serving as chair of the Phoenix AIPAC chapter. “But over the past few years, I’ve been a bit heartbroken by the lack of civility at the higher levels in Congress and amongst our elected leaders. So, I wanted to make a difference, to instill greater trust in our democratic society.” When the IRC post opened up, Neuberg saw that as her golden opportunity.

“I thought, ‘You know, I do have a unique skill set. I am bipartisan, I’ve proven myself to be an effective leader, and I’m a psychologist, so I can deal with conflict,” she says. “I understand people, and I’m really tough when I have to bring people from different sides together.”

Of course, it remains to be seen whether she can bridge the interests of the other four members of the commission, all of whom were hand-picked by Democratic and Republican leaders in the Arizona House of Representatives and Senate, but who in turn voted unanimously to select Neuberg as the independent chair. The partisan jockeying for control of district lines promises to be fiery: Dems currently hold a 5-4 congressional advantage in Washington D.C., an advantage that could be reversed by slight changes in districting (see sidebar).

The new maps will have similarly critical import in the Arizona House of Representatives and Senate, where the GOP currently holds narrow 31-29 and 16-14 leads, respectively.

With the first draft of its maps due to be completed by October 27, followed by a constitutionally mandated 30-day public comment period, the AZ IRC is set to have the final maps on the secretary of state’s desk by December 22. If the four partisan members deadlock on where to draw the lines, it’ll be up to Neuberg to make the tie-breaking decisions.

Former chair Mathis believes Arizona’s redistricting efforts would be better served by a nine-member panel made up of three Democrats, three Republicans and three capital-I Independents. “That would really reflect the true composition of the state,” Mathis says, pointing to the roughly 1.3 million of the state’s 4 million registered voters who were registered as independents in the November 2020 election. “Now they’re almost a third of the voters, and I think the commission should reflect that. That way, every decision the independent made wouldn’t be boiled down to, ‘Oh, she’s siding with the Democrats’ or ‘She’s siding with the Republicans.’”

As it stands, the IRC’s one tie-breaker seat is the one most susceptible to being lobbied – a practice Neuberg insists is constitutionally off limits, although she expects some special interests will try. “I think my four colleagues will have more political pressure than me, because I don’t need the politicians for anything.” She hopes she won’t need to board up her windows, but she fully expects some verbal assaults. “Politics is a full-contact sport, and I’ve developed a toughness,” she says, with a wry smile. Most importantly, she’s not letting the perceived power of the position go to her head.

“I don’t feel powerful. I feel responsible,” Neuberg says. “I feel pressure to meet the needs of the state, and to keep public trust. And,” she adds, putting on her psychologist’s hat, “I guess I feel the appropriate amount of anxiety.”

Adopted in 2012, Arizona’s current congressional map technically favors Republicans, who enjoy solid majorities in four of nine districts. However, Democrats have proven more adept at mobilizing swing votes in the state’s two “competitive” districts (D1 and D2) – defined as a district where any partisan advantage among registered voters is less than 5 percentage points. 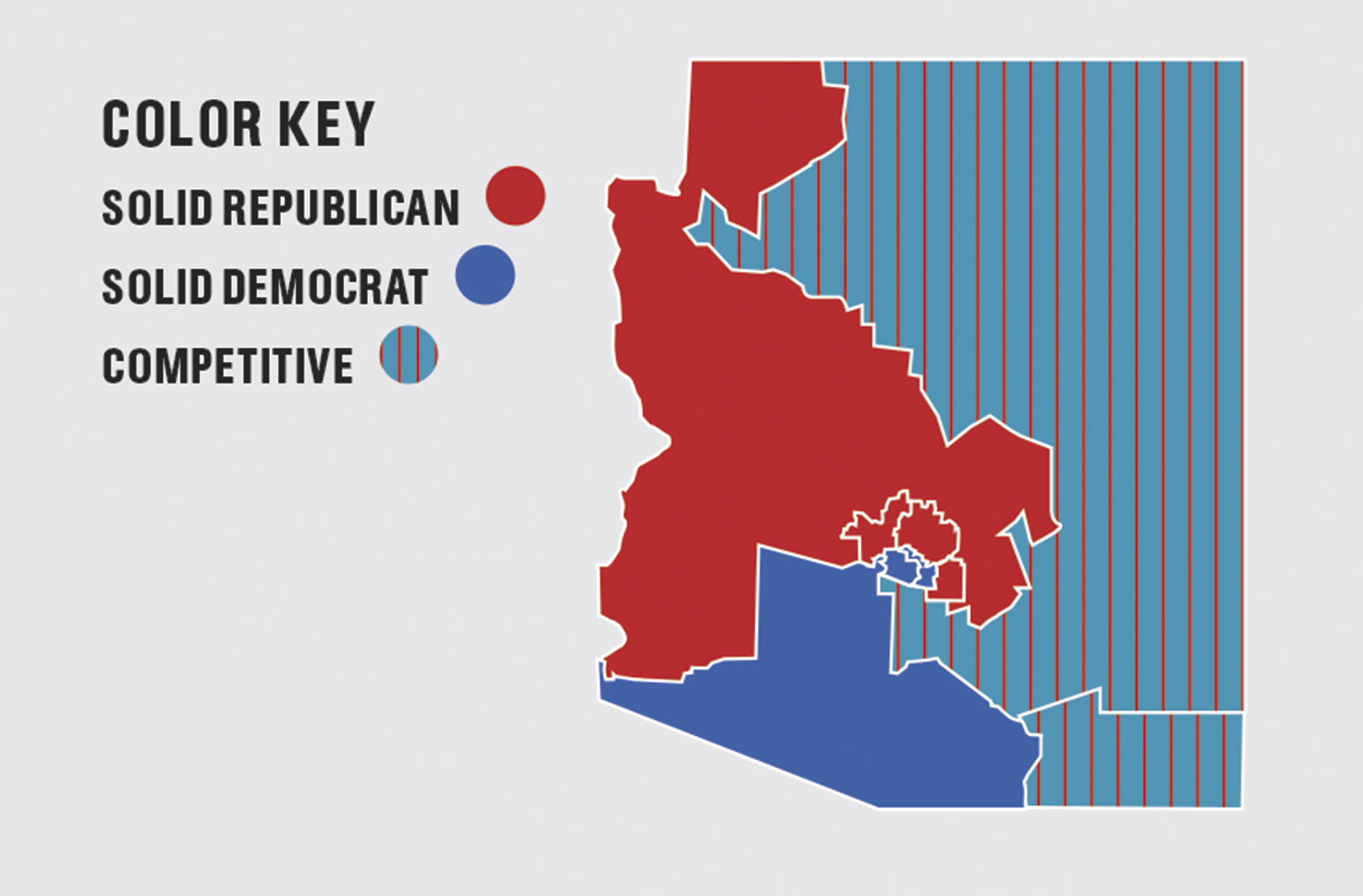