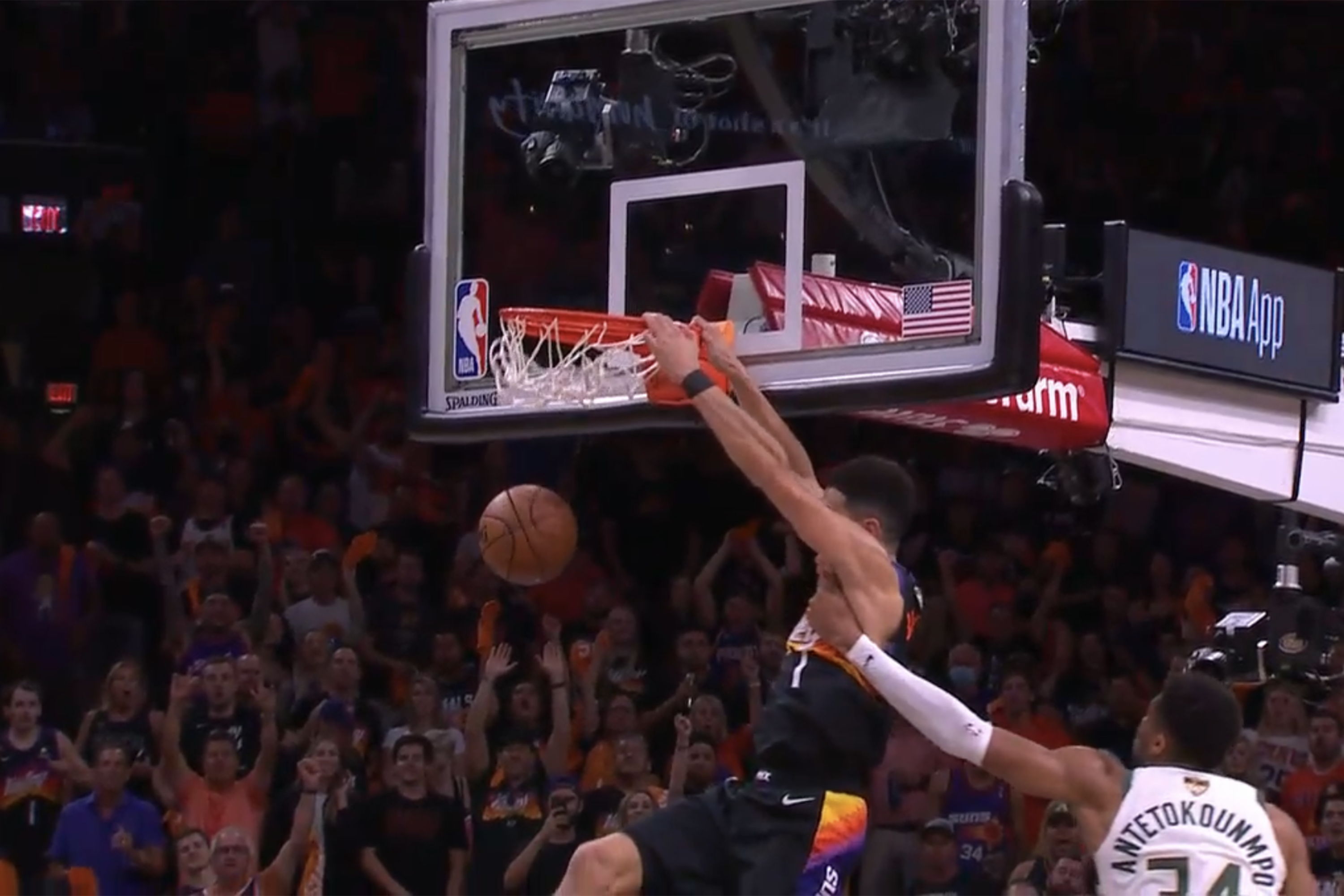 After a weeklong hiatus in the White Mountains, the Monday sports blog is back and we have some major takeaways from the previous week in sports. Let’s dive into the five biggest.

1. Suns on the verge of another heartbreak.

The Phoenix Suns raced out to a 16-point first quarter lead in that pivotal Game 5 Saturday night only to see it wiped away faster than Al McCoy can say “Shazaam!” after a three-pointer.  Milwaukee shot an incredible 71 percent from the field in the second and third quarters and held on to steal Game 5 on Phoenix’s home court. The Bucks now have Game 6 at home Tuesday night with a 3-2 series lead and a chance to win the franchise’s second NBA championship in front of their own fans.

Big Takeaway: Losing the coin flip for Kareem Abdul-Jabbar. John Paxson’s three. Robert Horry’s hip-check of Steve Nash. Amare Stoudemire and Boris Diaw suspended. Ron Artest’s putback. The list of heartbreaking moments for the Phoenix Suns franchise is long and painful and seems to span just about every generation of fans. Losing a 2-0 lead in the NBA Finals with legitimate chances to win in games 4 and 5 may very well be this generation’s heartbreak.

2. Bucks are making too many iconic plays.

The aforementioned list of gut punches will include the Game 4 block and Game 5 steal and alley-oop if the Suns end up losing this series. In case you missed it, Bucks forward Giannis Antetokounmpo made the game-saving plays in the closing moments last Wednesday and on Saturday night – with an assist from defensive wiz point guard Jrue Holiday. These are highlights that could forever haunt Phoenix fans.

Replays of that absurd Giannis block on Ayton pic.twitter.com/LneQ4bwgCG

"HOLIDAY RIPS IT AWAY!"

Sound up for the @Bucks radio call of Jrue's steal & lob to Giannis late in Game 5! #ThatsGame

Big Takeaway: Most of us thought this was the clear shot to our long-awaited NBA title. There’s no Michael Jordan in the way like in 1993. There’s no Kobe Bryant in the way like in 2010. No dirty Spurs like in 2007. But we forgot about Giannis. The Greek Freak (as he’s nicknamed) seems to have more desire, passion and drive to will his team to victory than any other player on the court. He is in the way of our Suns championship.

3. Devin Booker needs someone else to help.

Devin Booker has scored 40-plus points in back-to-back games – both losses – putting his name in the NBA Finals history books.

Devin Booker is the first player in Finals history to lose back-to-back games despite scoring 40+ points in both games.

He's only the 5th player to do that in any playoff series h/t @EliasSports pic.twitter.com/i06vMCbO94

Big Takeaway: Booker’s 42 in Game 4 was the only thing that kept the Suns close. Deandre Ayton needs to do better than 6 points. In Game 5, same story. Booker poured in 40 while Ayton chipped in 20 and Chris Paul added 21. It wasn’t enough to compete with the Big 3 of Milwaukee: Giannis 32, Holiday 27 and Khris Middleton 29. It can’t be the Booker show and hero-ball in Game 6 if the Suns want to win. They have to play the team game that got them to this point.

Immediately after the Game 5 loss, several Suns fans took to Twitter with the optimistic view that Phoenix could rally to win in seven much like the Arizona Diamondbacks did in 2001. The comparison is both teams won the first two games of the series, then lost three straight. The D-Backs of course sent dominant starting pitchers Randy Johnson and Curt Schilling to the mound to win Games 6 and 7 at home. Can the Suns repeat that feat 20 years after Phoenix’s first major professional sports championship?

The table is set.

Big Takeaway: It’s wishful thinking at best. I view it from the other side and compare it more to the 2003 Chicago Cubs: a team that came from nowhere, no one expected them to be there, built with mostly young talent and some veterans around it, seemed to be rolling towards breaking a long franchise curse and a title, only to be derailed by an unforgettable set of plays. I was a die-hard fan of that team much like I am of this Suns team and the gut feeling is the same today as it was 18 years ago for me.

The Arizona Diamondbacks won their 27th game of the season Sunday behind another strong start from pitcher Merrill Kelly, who nearly went the distance in a 6-4 win over the Chicago Cubs at Chase Field. Kelly threw 82 pitches before he was lifted in the 9th inning and won his sixth game this year and fourth straight decision. Despite this strong performance, the play people will remember from this game is Kole Calhoun’s dopey baserunning play.

The Diamondbacks find a new and creative way to get no runs out of a bases-loaded situation, as Kole Calhoun forgets to run all the way to first base. pic.twitter.com/hpXTXD9ljw

Big Takeaway: We’ve seen too many examples of bad or lazy baseball plays from the Diamondbacks this year. Friday night, Madison Bumgarner slowly jogged out a bunt that he could’ve hustled on and beat out after the ball was poorly handled by the catcher. Bumgarner was rightly booed by the home fans as he returned to the dugout. Several weeks ago, Josh Rojas and Nick Ahmed failed to throw the ball to home as an injured Brewers player limped down the baseline on his way to score. Calhoun’s lack of running to first base on Sunday is the latest blunder in this bonehead of a season and there is likely to be more like it coming as we hit the dog days of summer. The bright spot however is Kelly. Since June 21, the D-Backs veteran hurler has pitched 38.2 innings over six starts, allowing 11 earned runs and has lowered his ERA nearly a full point. You could argue some players have quit on the season already but you can’t say that about Merrill Kelly.