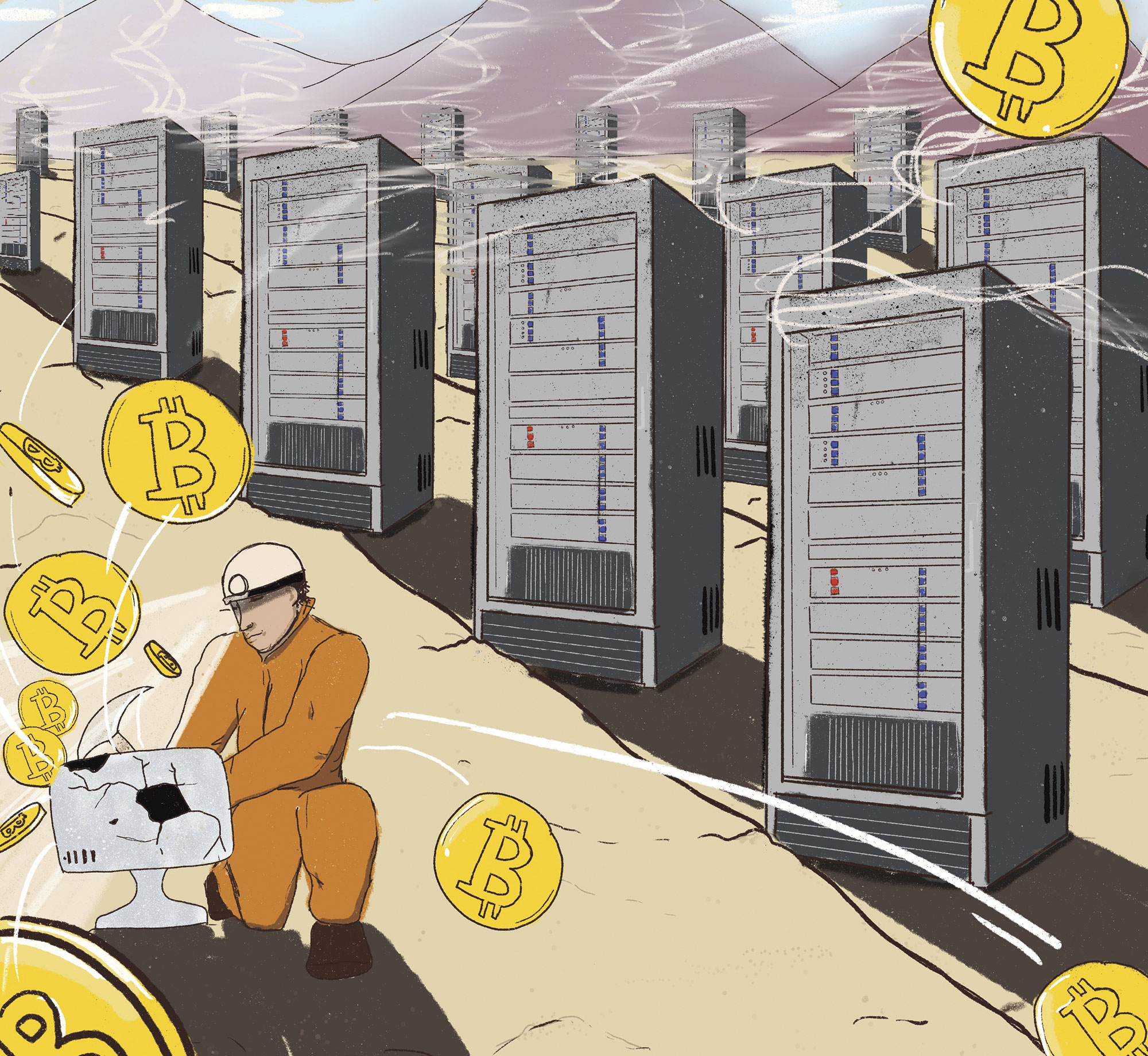 Arizona has a long history of mining metals like copper, lead and silver. Now a cottage industry has arisen to mine ore of a different stripe: Bitcoin.

“There are a couple players here and there in Arizona,” says Jason Roberts, operations manager at Dynamic Power Sources, a 20,000-square-foot Bitcoin mining warehouse in Lakeside, near
Pinetop.

The world’s first cryptocurrency, Bitcoin was born in 2008 when the pseudonymous computer scientist Satoshi Nakamoto published a white paper outlining the project: a digital, decentralized currency that users could freely exchange without government interference.

One of its features is that new Bitcoin are “mined.” What this means is the vast network of privately owned computers that collectively host the cryptocurrency and record transactions are rewarded with new Bitcoin. It’s a wage of sorts, based on how much “work” (i.e. computing power) the operator donates.

Dismissed by some critics as a libertarian Ponzi scheme, Bitcoin has proven profitable but volatile. Since Nakamoto mined the first coins in 2009, the value of one Bitcoin soared from zero real dollars to more than $64,000 in April before crashing in late spring. (It was sitting at around $36,000 as this issue went
to press.)

Bitcoin devotees are undaunted by its unpredictability. Today, some 900 new Bitcoin are mined per day. It doesn’t take a cryptographer to know that there is serious money to be made in Bitcoin mining.

However, Bitcoin mining consumes a lot of energy, and its servers produce a prodigious amount of heat. By some estimates, the global Bitcoin network consumes 120 terawatt-hours per year – more than the entire country of Argentina – and a recent University of New Mexico study found that mining $1 of Bitcoin created
49 cents in health and climate damage.

It can also wreak havoc with energy markets. Bitcoin critics share the cautionary tale of Plattsburgh, New York, an upstate town blessed with inexpensive hydroelectric power – at least, until Bitcoin miners descended upon it, driving up rates so dramatically that in 2018 the town placed a moratorium on new mining.

For Arizona, a state plagued by heat-island effects and other environmental challenges, this all can’t be good news, can it?

Local Bitcoin advocates downplay concerns. They note that much of the Valley’s Bitcoin industry is rooted in mining machines (which look like a typical desktop computer tower), but not in mining itself. “We distribute the hardware,” says Nick Jackson, founder of Mesa’s BlokForge, which imports for the Chinese manufacturer Canaan and claims to be the largest distributor of Bitcoin mining machines in the U.S. “We service the hardware. We help beginners pick out the hardware. But we don’t mine.”

Graymatter Industries in Glendale has a similar model. It imports, repairs and distributes mining machines throughout North America. Theoretically, the energy burden of Bitcoin mining is being exacted somewhere else.

How big is this network of miners in Phoenix and the rest of Arizona?

It’s hard to say, because many of the biggest are underground. “Even the players that I know exist, they’re silent,” Roberts says. “They’ve decided to do it without making noise. There’s probably more than you think.”

Jon Zifcak, an Arizona State University grad and professional blockchain advocate who mines various cryptocurrencies at home with his kids, says that some of the biggest silent players are larger Valley data centers – i.e. companies that operate servers for corporate clients – that have quietly installed mining machines. “You can have a hard time pinpointing who’s doing what,” he says. “It’s a pretty guarded secret. If you know that someone over here was mining X amount of Bitcoin, then you become a major target for hackers and a lot of things.”

Other professional miners are rumored yet difficult to find. Brian Snyder of Graymatter notes a small East Valley miner who mines in an auto shop. He speaks of a South Phoenix miner with a roof full of solar panels to feed machines.

There are incentives to mine quietly, and, in Arizona, there are two obstacles to mining at all: heat and electricity costs. These factors are why Dynamic Power Sources opened its facility, stacked to the ceiling with racks of thin black mining machines, in cooler Lakeside in Navajo County.

In Lakeside, electricity costs less than in greater Phoenix – currently about 12 cents per kilowatt-hour – though more than in other rural areas. “We compete with states in regard to electricity costs,” Roberts says. “I know people in Wyoming who are getting 3 cents a kilowatt-hour. That’s half of what we pay here.”

In Lakeside, too, he can diffuse the immense heat created by mining machines by opening his doors and drafting his facility in winter. In summer, he uses evaporative cooling.

“The hotter it is outside, the more you have to cool it down,” Jackson says. “And cooling costs money.” Though 5 percent of the machines he imports stay in-state, “Arizona isn’t really known for mining,” he says.

Cooler places are ideal for Bitcoin mining, especially places where cheap, renewable electricity is abundant. Think Canada, Seattle, Iceland and Northern Europe, all home to massive mining operations. Relatively affordable electricity, generous tax incentives and a lack of natural disasters are known to attract data centers to Arizona, but the state sits just outside the Goldilocks zone for Bitcoin mining, it appears – only favorable enough to have spawned a patchwork of corporations and hobbyists mining in the desert.

However, in an era when governments are scrambling to curb greenhouse gas emissions to limit climate change, even the possibility of a mining boom in the Valley is enough to excite speculation among climate experts. Ariane Middel, an urban climate specialist at Arizona State University, believes it could worsen Phoenix’s heat island – i.e. its amplified temperatures due to heat-absorbing roadways, parking lots and buildings.

“And then you add on top of it the wasted heat from air conditioning, which makes it even warmer,” Middel says. She believes Bitcoin mining might act in a similar vein to air conditioning: as a source of excess heat that further warms the heat island.

But does our patchwork mining scene make a difference? Given that we don’t know how much clandestine mining is happening at big data centers, the answer is somewhat obscured. Still, Middel believes any increase in temperature as a result of our mining “likely wouldn’t be a huge number, that you would actually see,” a number more like a small fraction of a degree.

However, she does warn that the picture would change with further visible growth of the mining industry – which is certainly in the realm of possibility given the exceptional average annual increase in Bitcoin’s price and the nascent migration of mining out of China and to other parts of the world. The future rise of mining facilities in urban centers like Mesa and Phoenix could be more problematic.

“If it scales up and there are more and more data centers [doing mining], that’s when it becomes a concern,” she says. “Something we should look into much more to see what the exact effect is so we can mitigate it if needed.”

Energy and BTC by the Numbers

Average time to mine one Bitcoin block: 10 minutes