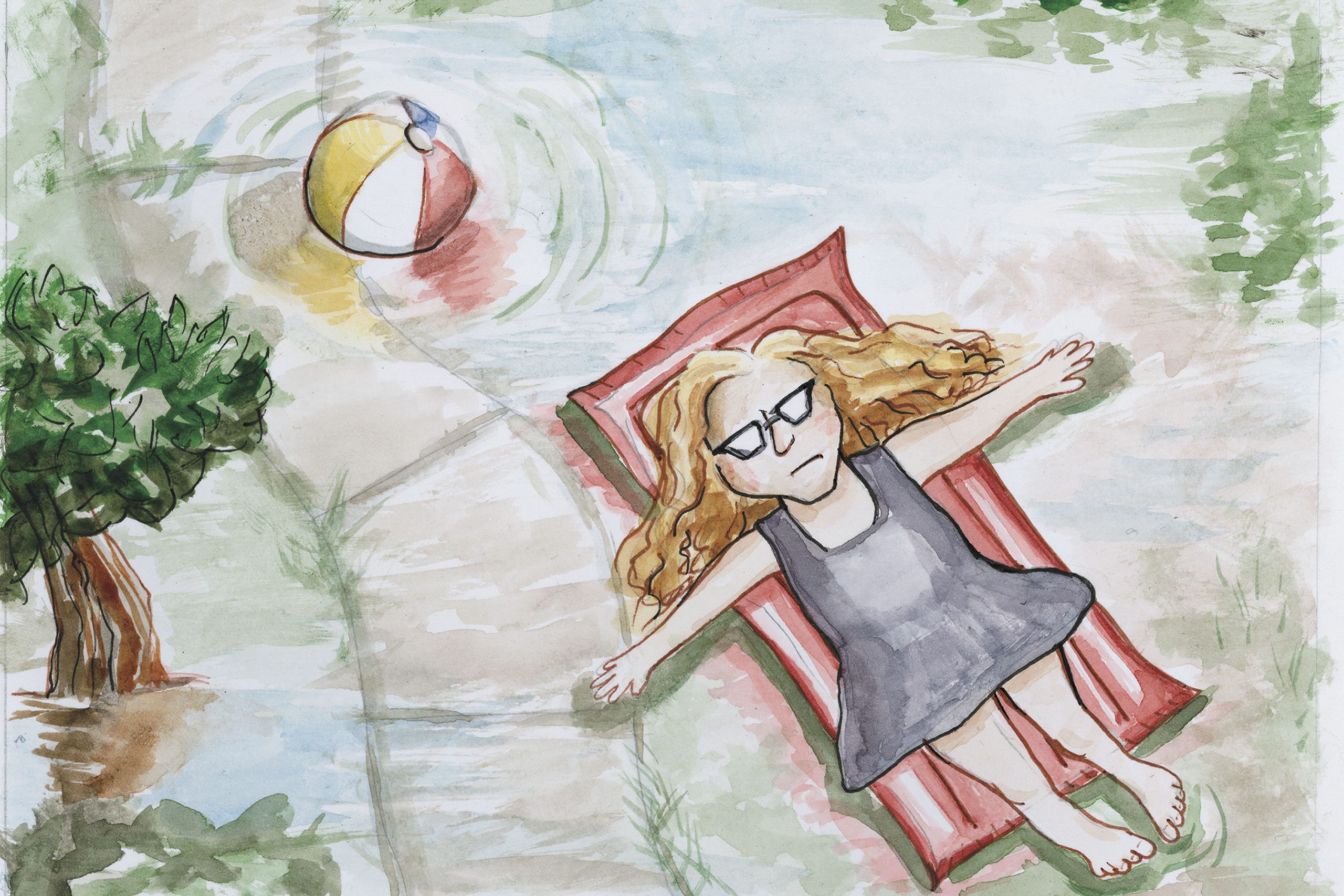 Our columnist wrings her hands over her irrigated lawn while enjoying its fruits.

The other day, the guy who mows my lawn tried to tell me that flood irrigation is better for the environment than desert landscaping.

I almost choked on a mouthful of peach. We’d each picked one from the tree in my front yard and stopped for a moment to eat and chat, gazing at branches so heavy with fruit that they’d bent over the sidewalk, almost into the street. It was an embarrassment of riches, an obvious indulgence – hundreds (thousands?) of juicy peaches after one of the hottest, driest years on record.

“And it’s thanks to that evil irrigation,” I said, hanging my head.

“Don’t feel guilty,” he said. “Irrigation is better for the Valley than xeriscaping. Who wants sticky cactus and rocks when you can have green grass and big trees? After all,” he added, “you can’t spread a blanket down on desert landscaping and enjoy a picnic.”

Well, of course you think that, I thought. You cut grass for a living.

Still, I couldn’t believe he’d said it. True, as he pointed out, flood irrigation cools a neighborhood by a degree or two. I love that, and if I’m being honest, I’ll tell you that there’s no better feeling than peeking out the front door as water cascades across the lawn, soaking tree roots and staining the bottoms of fences. But I don’t feel good about it. Irrigation is a reminder that we can’t make it here on our own grit, that maybe we shouldn’t be in the Valley at all. At least, maybe we shouldn’t be growing peach trees here.

A lot of people share my ambivalence. The love of irrigation runs deep; it’s a bit of a cult. “I also run a flood-irrigation household,” my editor emailed back when I pitched this idea. “They can take my ditch diverter when they pry it from my cold, dead hand.”

OK, so this much is clear: Guilty as I feel, I’m not ready to call the city and stop my irrigation. Over the years I’ve come to appreciate the beauty of the desert, buoyed by the Instagram influencers who present my hometown’s native foliage in its best light. Still my heart belongs to the green: I love the baby citrus trees with their promise of oranges and limes, the shade trees that hold the ends of strings of twinkly white lights and, of course, my peach tree.

But at what cost? I started asking around. My dad, who (full disclosure) worked for Salt River Project for decades, pointed out that alfalfa and cotton use up far more water than my micro orchard. A friend who works in water resources for local government observed that irrigation is unnatural and unsustainable, like most things in these parts; the Valley, he said, was never meant to hold millions of people.

I called Sandy Bahr, who for the last 25 years or so has been my go-to for environmental questions. As the director of the state’s Sierra Club chapter, Bahr fights the good and often futile fight at the state legislature year after year. She always sounds exhausted.

“There’s not a simple answer to it,” she said when I posed my question. If I don’t irrigate, Bahr said, that just means there will be extra water for developers. This is as much about water policy as it is about water waste, she says. “There should be a way to conserve and have a cut go to keep a river flowing or sustain some springs. Our water policy doesn’t really encourage conservation.”

Mostly, Bahr says, it’s about optics. Irrigation “kind of undercuts the whole message that we have a water problem.”

OK, but people have been doing this for thousands of years. Does that justify it at all? The answer is no.

“Ancient people were not transplanting that water to maintain landscape. It was for food. It may still make sense for food, because we do need food. But it doesn’t mean that we have to grow super thirsty things, and it wasn’t intended to flood something that we then are having to constantly cut or that contributes to the huge allergy problems,” Bahr says. “Before we were here, there had been manipulation of the environment in order to sustain the livelihood of the people who lived here. But it was to grow the food that they were going to eat.”

Also, she adds, outdoor water accounts for far more residential use than indoor. That really gave me pause. But Bahr says we should focus more on who we elect to fix our water policy than on who’s wasting water by irrigating their lawn.

“I don’t think we’ll get there by nitpicking or feeling guilty about every action,” she says.

Like all those peaches piled on my kitchen counter, it’s a lot to chew on.