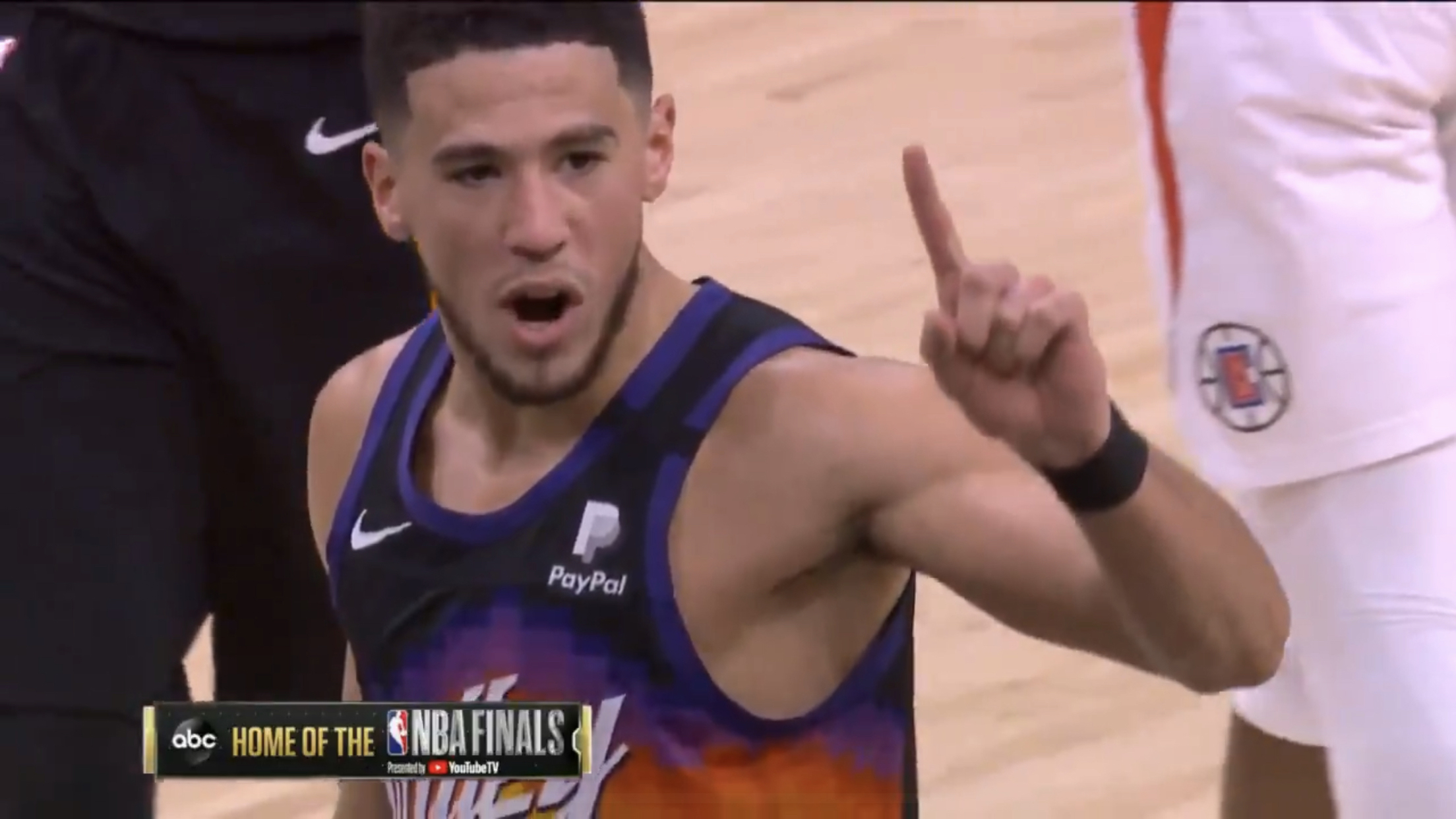 Suns star guard Devin Booker turned in the best game of his career at the right moment as the Phoenix Suns opened the Western Conference Finals with a 120-114 Game 1 win over the Los Angeles Clippers. That tops our look at the five biggest takeaways from the weekend in sports.

Booker recorded the first triple-double of his career Sunday to lead the Suns to a win over the Clippers and a 1-0 series lead – all without starting point guard Chris Paul (out because of COVID-19 protocols). Booker scored 40 points, grabbed 13 rebounds and had 11 assists in an historical performance: it’s only the third 40-point triple double in a conference finals in NBA history. Booker also led both teams in all those categories, joining some elite company that includes the names LeBron, Bird and Russell.

Booker is the first player to do this in any playoff game in Suns history.

Big Takeaway: We are witnessing today what many believed would happen if Booker simply got a chance to reach the postseason. Sure, there were also many doubters and those who said Booker was an empty stat stuffer. There should not be any more debate over what type of player Devin Booker has become. He’s a superstar, an on-court assassin and a bona fide top 10 NBA player who should be a household name once these playoffs are done.

Video posted to social media after the Suns-Clippers game shows fans of the two teams in a heated verbal argument that quickly escalated into violence. The video below comes courtesy of Twitter user @hayden_sandman, which prompted a response from the Suns organization denouncing violence in their arena.

Big Takeaway: While many other NBA team’s fans were generating headlines for poor conduct (Knicks fan spitting on Trae Young, Sixers fan dumping popcorn on Russell  Westbrook and Celtics fan throwing a water bottle on the court) Suns fans, up until this point, were having a moment. The ‘Suns in 4’ guy was getting national attention, along with the kid who took off his shirt on the jumbotron and all the celebrity sightings courtside in the previous series against Denver. All things were trending in the right direction until this brawl last night. Let’s not glorify this recent situation and kudos to the Suns for addressing it quickly. Don’t allow the knuckleheads to spoil our city’s shot at finally winning an NBA championship.

Former  Arizona State Sun Devil golfer Jon  Rahm captured his first career major in dramatic fashion Sunday, winning the U.S. Open by one shot over Louis Oosthuizen. Rahm, who was booted from a tournament he was leading by six shots two weeks ago because of a positive COVID test,  sunk birdies on the 17th and 18th holes in the final round. His fist pumps will tell you how special those putts were.

An absolutely LEGENDARY finish!@JonRahmPGA closes birdie-birdie on 17 and 18 to become the 121st #USOpen champion! pic.twitter.com/pfKmYlIAYe

Big Takeaway: Not bad for a guy who learned he had the coronavirus 15 days ago. A virus that shut down the sports world (among many other things) stood no chance against Rahm.

D-backs dither and dawdle during disaster in the desert.

Alliteration will get us through this season, maybe. The Arizona Diamondbacks are losing so much, the history books are taking notice. Last Thursday, the 10-3 loss at San Francisco marked the 23rd straight road loss for the D-backs, setting a new Major League Baseball record for the longest road losing streak in a season. The team is currently on a 17-game losing streak overall (the last win came against the New York Mets in extra innings on June 1) which is approaching some modern day losing streak records (the Philadelphia Phillies lost 23 straight back in 1961 – I won’t include some of the records from the 1800’s). The Kansas City Royals in 2005 lost 19 in a row and the 1988 Baltimore Orioles lost 21 straight, to give you some context of modern day MLB and how rare and hideous this current skid truly is. USA Today’s Bob Nightengale summed it perfectly when he labeled it as an embarrassment.

The #Dbacks have fired more hitting coaches (2) this month than wins (1). They have now lost franchise record 17 in a row, 31 of 33 and 40 of 45 as the embarrassment in the desert continues.

Big Takeaway: The 2003 Detroit Tigers hold the dubious record of most losses in a season (119)  since World War II. The Diamondbacks are currently 20-53 as of June 21 and would need to go 24-65 the rest of the season to avoid tying them as the worst team in the past 75 years. We’re not sure that’s possible with the roster that manager Torey Lovullo has to work with.

News broke last Wednesday that the NCAA is investigating the Arizona  State Sun Devils football program for alleged recruiting violations that includes hosting high school athletes on campus during the COVID-19 dead period, something that was banned for more than a year and recently ended on June 1.

NCAA is investigating Arizona State for allegations related to the football program.

The allegations include paying players, MAJOR recruiting violations, Covid violations, and other things that have left serious concern about the coaching staff being able to coach this season.

Big Takeaway: You won’t convince me that Arizona State is the only college football program bending or breaking the rules (allegedly) to get recruits. The sport thrives on it. It just stinks that ASU finishes 7-6 every year and doesn’t have anything to show for it.