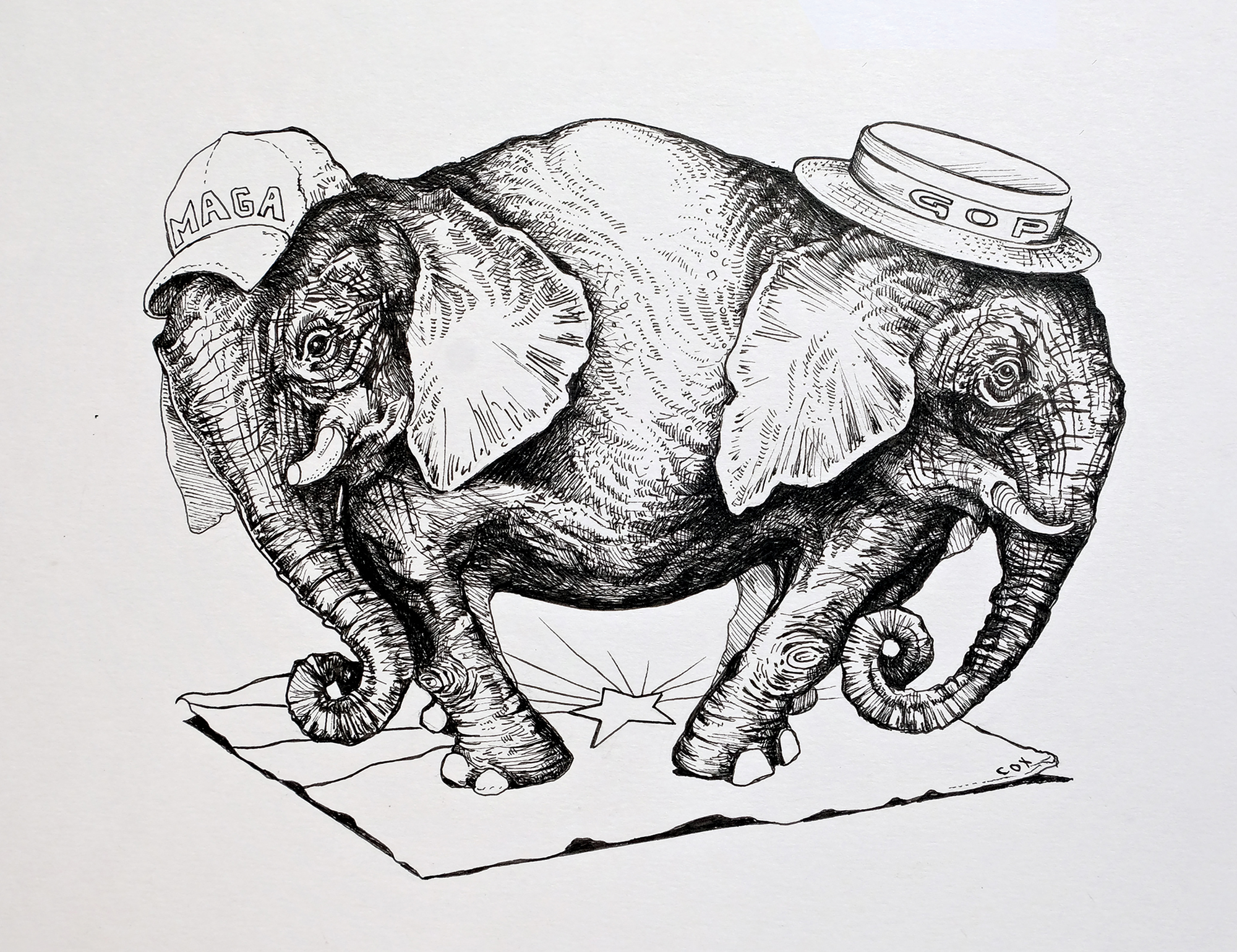 The election is over, but the war is just beginning for control of Arizona’s largest political party.

On January 6, as an astonished America watched live images of the assault on Congress, several hundred Trump supporters gathered at the Arizona State Capitol to watch events unfold on a Jumbotron on the lawn of the statehouse.

In seconds, the MAGA-hatted crowd – assembled for a “patriots watch party” organized on social media by the Arizona Republican Party – physically divided into two camps: those at least mildly shocked by the sight of their kindred spirits in Washington, D.C., taking President Donald Trump’s message to “fight like hell” literally; and those who reveled in it.

“Oh, I think it’s fantastic they’re storming the Capitol!” exclaimed Phoenix pro-Trump rally fixture Tara Immen, clad in her usual head-to-toe American flag garb and brandishing a Captain America shield with a photo of Trump. “I personally love it because, you know what? It’s how this country was built, the way our founding fathers stormed the British Empire.”

The moment signaled a momentous new schism within the already fractious Arizona GOP. Could the pro-Trump camp, which had alienated many moderate Arizona Republicans during its four-year reign over state politics, now be splintering into its own moderate and radical wings?

“In normal times, a political party that lost a national election, lost control of the U.S. Senate and had its leader falsely claim an election was ‘stolen’ would do some serious soul searching, then it would do a deep dive and map out a plan to reach more voters,” says Chip Scutari, a former political reporter for The Arizona Republic who now manages the PR firm Scutari & Cieslak. “The Republican Party – in Arizona and nationally – is doing the opposite. They are doubling down.”

Scutari says the reluctance among elected Republicans to call out the debunked conspiracy theories that defined Trump’s last year in office have turned “fringe” operatives, like Arizona Republican Party chair Kelli Ward, who won the seat in 2019 based on her support for Trump, into “party darlings.”

The main business of the day was deciding who would chair the state GOP: Ward, or one of her three challengers, Sergio Arellano, Bob Lettieri or Ann Niemann, all campaigning on the contention that Ward’s staunch Trump support cost the party the presidency and both Senate seats – the first time since 1948 that Democrats had pulled off such a hat trick. The first vote was too close. A run-off the same day awarded her another term.

“I think that people who have been in control of the party for a long time before President Trump want that power back,” exclaimed a triumphant Ward afterward, granting a rare interview to PHOENIX. “And that’s the struggle between the grassroots and the political operatives, consultants, lobbyists, et cetera, who like to have their thumb on the scale as to what happens in our state.”

Re-electing Ward wasn’t the only sign that a sizable faction of the Arizona GOP remains hitched to the Trump train. Also in January, Rep. Walt Blackman, a Republican representing Arizona’s 6th legislative district, filed a bill that would allow county attorneys to pursue murder charges against doctors providing abortions – and the women receiving them. Blackman claims the bill is supported by at least nine other state Republicans.

The same month, Rep. Shawnna Bolick, Republican chair of Arizona’s House Ways and Means Committee, introduced a bill that would allow the state legislature to override the secretary of state’s certification of its electoral votes “at any time before the presidential inauguration,” a tactic Trump unsuccessfully attempted to coerce state legislators following the 2020 election. For Democrats and many moderate Republicans, this power grab crossed a line. Republican State Sen. Michelle Ugenti-Rita of Scottsdale tweeted the bill was “bad news for Arizona voters.”

Despite her re-election, Ward is facing spirited competition to lead Arizona’s undeterred far-right caucus. Before her re-election could be announced at the January 23 meeting, the party was crashed by surprise guest Daniel McCarthy, an outlier candidate who’d recently talked about launching an Arizona branch of Trump’s purported “MAGA Party” to challenge “disloyal” Republicans who voted to impeach the former president. McCarthy delivered his short speech to a roar of boos from the crowd, lumping the state’s Republican and Democratic parties together as a “uniparty,” with “spoon-fed” Republican candidates the “controlled opposition.”

Given the rise of so many headline-grabbing strivers, do moderate GOPers have any chance of retaking the reins of the Arizona Republican Party before the 2022 elections?

“Not a chance,” Scutari says. “Moderate Republicans, which I define as pro-business, pragmatic and problem-solvers, are an endangered species in Arizona and across the country. The losses of Kate Brophy McGee and Heather Carter in the state senate continued that trend in 2020. Being labeled a moderate Republican these days spells doom in any GOP primary.”

Chuck Coughlin, CEO and president of HighGround, a right-leaning Arizona political consulting firm, agrees. “The way the state GOP is currently constituting itself, it will be unable to win statewide elections,” he says, calling out the state’s large contingent of independent voters. He adds that much of how Arizona Republicans refine their approach in the coming years will depend upon how new Democratic U.S. Senator Mark Kelly defines himself over the course of his term.

“The Trump Republicans are defined by what they’re against, because they’re not for anything,” he says. “So if Mark Kelly, by his votes, defines himself as a [Chuck] Schumer Democrat, that’s going to be perfect for the Trump people, because they love to be against anything Schumer stands for. But if he defines himself as other than [progressive left]… it sort of disarms them.”

Coughlin doesn’t see a leading Republican candidate to run against Kelly in 2022, especially since Ducey said he doesn’t plan to run. But Scutari has heard rumblings about Blake Masters, the 34-year-old COO of Thiel Capital and Tucson Republican who considered running against Martha McSally in 2020, and former Ducey chief of staff Kirk Adams. “Masters has close ties with Peter Thiel, the billionaire venture capitalist who co-founded PayPal and was an early investor in Facebook,” Scutari says. “He could raise money from his Silicon Valley network and has fundraising ties within Donald Trump’s ‘MAGA’ network. And Adams is kicking the tires and making the rounds with influential groups within the establishment wing of the GOP, such as the National Republican Senate Committee.”

A backlash against the extremists, led by more center-right players, may already be in the works. When the results of the runoff vote in the Arizona GOP chair race came in, Ward was proclaimed the winner by a margin of 51.5 percent to Arellano’s 48.5 percent, narrowly defeating a candidate backed by Latino GOP members as a bridge to drawing more moderates to the party. Arellano, who initially threw his support behind Ward as the results were announced, later publicly called for a recount – parroting the familiar language used by Ward in her lawsuit to overturn the state’s presidential election results, a case that was dismissed by the Arizona Supreme Court.

“I have no doubt that everything will be as advertised,” a sarcastic Arellano told The Washington Post, referencing Ward’s relentless demands for “election integrity” and “full transparency” in the presidential election – even as she appointed the group tasked with counting ballots in the state GOP election and barred press from the latter part of the meeting. “Right?”