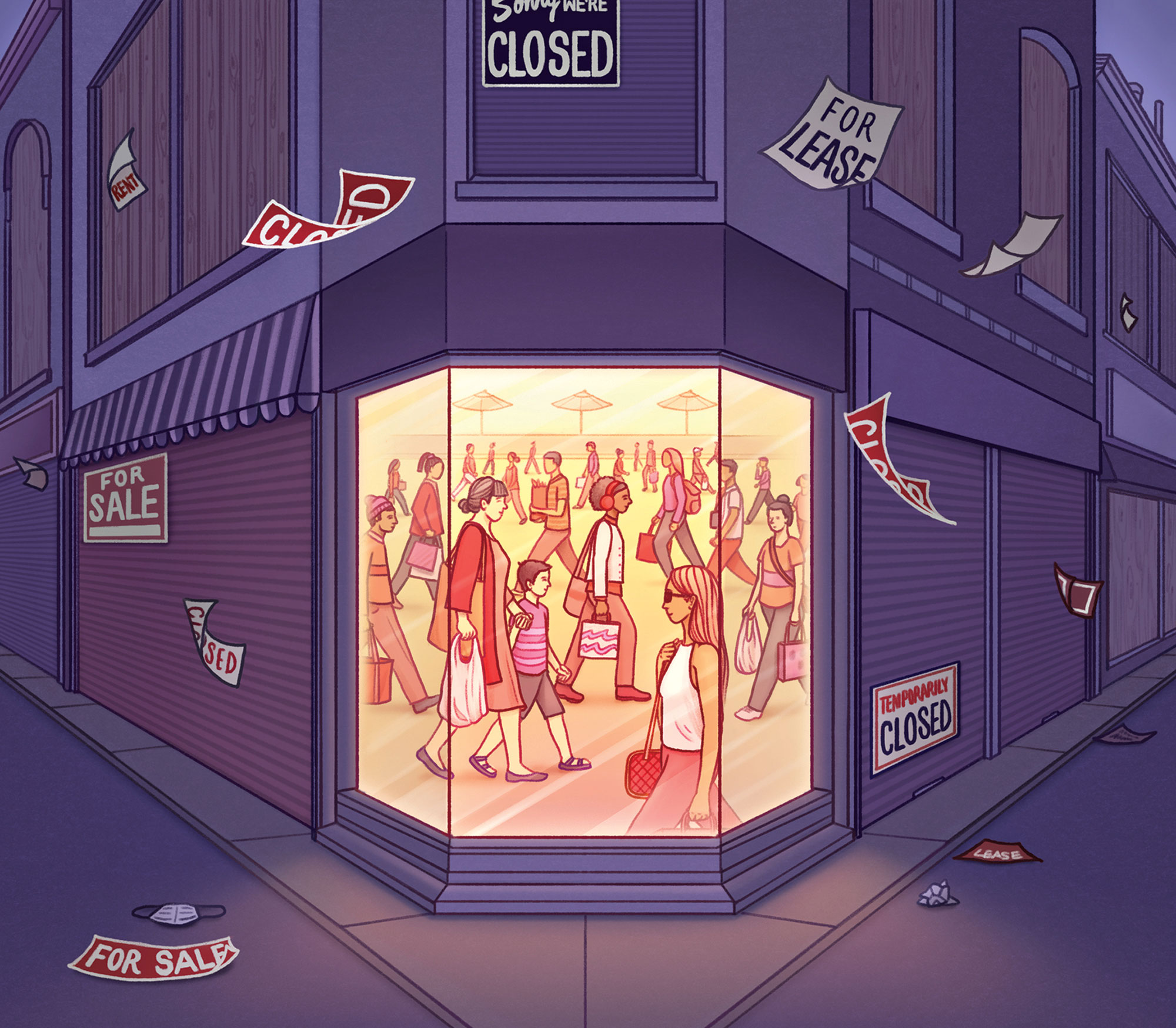 As restaurants shutter, shopping habits change and remote work becomes the new normal, what will happen to the Valley’s retail spaces, offices and commercial centers?

It’s been a heartbreaking year for Valley businesses. The COVID-19 pandemic marked the end of an era for neighborhood institutions like Phoenix Public Market Cafe, Carlos O’Brien’s on Northern Avenue and El Zocalo Mexican Grille in Chandler. Silvana Salcido Esparza sacrificed Barrio Cafe Gran Reserva to save her original restaurant. The owners of 11-year-old Harp Irish Pub in Mesa were locked out of their building by their landlord. Phoenix’s Helio Basin Brewing Co. closed but arranged for Tombstone Brewing Company to buy the fully equipped building and keep their staff employed.

With the closure of more than 50 restaurants and bars – along with untold numbers of other establishments – the question on everyone’s minds is: Will Phoenix become a zombified city of vacant buildings, boarded up windows and skeletal malls?

In a word: no – for the better part. Amidst the tragedies are stories of small businesses that are holding on, thriving and even expanding. Surprisingly, around 100 restaurants opened in 2020. Phoenix’s industrial sector is thriving. And throngs of out-of-staters are moving to the Valley, driving a robust residential real estate market and promising a cash injection in the long run.

“The great thing about Phoenix is we have a very diverse economy, and that diversity exists in areas that have continued to do well,” says Mark Stapp, director of Arizona State University’s Master of Real Estate Development program. “And because we’re relatively new and shiny, our ability to adapt to these changes in our built environment is better than [that of] older legacy cities.”

Still, we may see permanent changes in the Valley’s business landscape due to shifting lifestyle trends. “We’re in this great transition,” Stapp says, “and there is not a clear picture of the future.”

One of the biggest uncertainties is what will happen with businesses that benefited from rent deferrals, explains Alan Zell, president of ZELL Commercial Real Estate Services in Phoenix. At the start of the pandemic, many business owners negotiated with their landlords to pay no rent or reduced rent for a period of time. They would then pay that rent back – typically without interest – starting at a later date, which was often January 2021.

For example, Johnston & Co. – which runs and/or is the landlord for several Gilbert businesses, including the eateries and shops in Barnone – gave all of its tenants some rent relief for April, and they did not require that money to be paid back. After April, they worked with each tenant to create various rent relief strategies, including rent deferment into 2021. “Vacancies during a difficult period hurts all parties, so it was vital to see everyone weather the storm as best as possible,” says William Johnston, CEO of Johnston & Co.

Rent relief, government Paycheck Protection Program (PPP) loans, community support and innovative pivoting have kept many businesses afloat during the pandemic. However, rent deferral is “kicking the can down the road,” Zell says. “So, the question is going to come [in 2021]: Can these businesses afford to make those deferred payments, in addition to their standard rent, or is there going to have to be further renegotiation of leases? Or, in many cases, it could lead to more failures.”

The silver lining is that when businesses have failed, there is demand for the empty spaces. “Right now, our leasing activity is good,” Zell says. “We have seen a lot of boutique fitness uses, and a large amount of leasing of space by restaurants.” In some cases, he explains, restaurateurs are moving into eateries that were victims of the pandemic because it saves them the enormous expense of outfitting a new space for a restaurant.

A greater uncertainty is the retail sector and malls, which were weakened even in the Before Times by e-commerce, casual dressing trends and a growing preference for experiences over materialism. Then the pandemic killed off Metrocenter Mall and put others on life support. Christown Spectrum Mall lost anchor store JCPenney in September. Paradise Valley Mall said goodbye to Sears in 2019 and Dillard’s in December 2020, and many smaller storefronts remain empty. An estimated 25 percent of American malls will die in the next three to five years, according to retail analyst Coresight Research. How can shopping centers adapt to such an uncertain future?

Those uses might include grocery stores, multifamily housing, health centers, alfresco entertainment and even indoor farming, Stapp says. And because outdoor malls have been more resilient during the pandemic, Paradise Valley Mall’s planners are considering converting to a more open structure, he adds.

One change that may be here to stay is increased telecommuting and staggered work shifts. As a result, Zell thinks office space will become the weakest link in the real estate market as companies opt to downsize (see sidebar).

Meanwhile, the industrial sector is upsizing. Largely as a result of the pandemic, companies require fulfillment centers and food-storage spaces for online orders. “E-commerce has been on fire in Arizona, and we’re seeing record-breaking absorption numbers,” says Phil Haenel, director at commercial real estate company Cushman & Wakefield. “A lot of huge companies are relocating or expanding in our market, and it’s creating a ton of great jobs for the Valley.”

That growth is one reason Zell is optimistic. “Some [businesses] are going to have some bumps along the road,” he says. “But I think in the long run, the Phoenix metro area is going to be a leader and a survivor.”

Before 2020, just 7 percent of America’s workforce did their jobs remotely. Since the pandemic, it’s ranged from 33-50 percent. And many telecommuters wouldn’t say they’ve been missing going to the office five days a week.

But subleases skyrocketed 133 percent since 2019. That indicates many businesses are laboring to pay their rent.

1,859,700 square feet of office space was added to the Valley between January and October 2020. And more than 3.3 million square feet is under construction, suggesting growth remains steady.