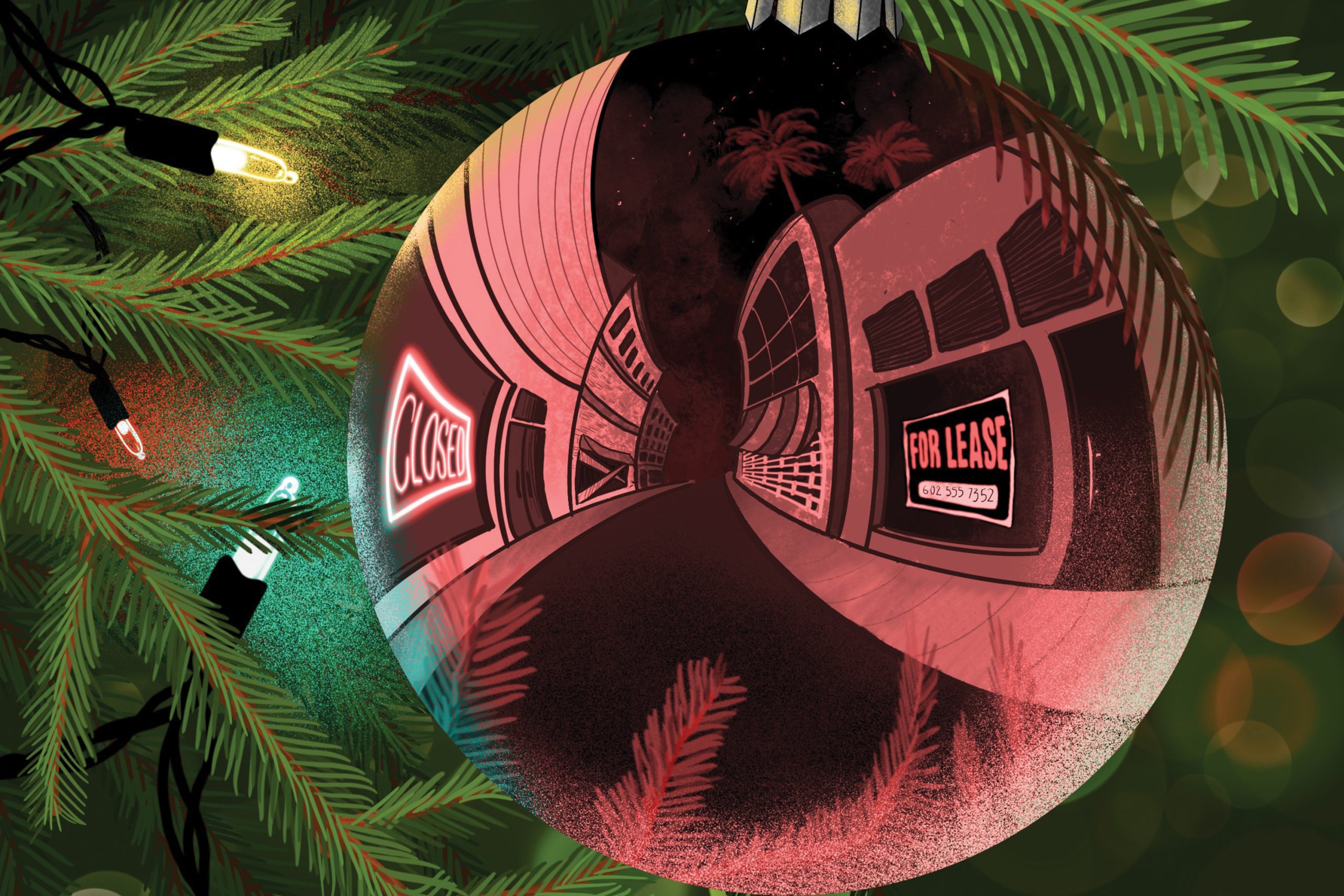 The demise of her favorite Christmastime tradition puts our columnist in a holiday funk – and makes her fret over the future of local business.

I can’t bear to think of Christmastime in Phoenix without Crafeteria.

Most people consider Black Friday the official start of the holiday season, but for me, it’s Crafeteria – the brainchild of Frances owner Georganne Bryant, who’s held the craft fair on the evening of the first Friday of December in the parking lot of her Uptown Phoenix boutique for more than a decade.

I just called Crafeteria a craft fair, but that’s like referring to Tovrea Castle as a single-family residence. Crafeteria is a happening. Held on one of the year’s rare chilly evenings, it’s an excuse to pull your cutest winter sweater out of mothballs, fight for a parking spot and nudge your way through the crowd to snap up handmade wares or smoosh into Frances to grab a gift for yourself. There’s always live music and whichever food trucks happen to be the most popular at the moment, and you’re pretty much guaranteed to run into every single person you know.

Bryant canceled this year’s Crafeteria months ago, which makes sense since it’s hard to imagine anyone maintaining 6 inches of distance, let alone 6 feet. And if I’m being completely honest here, I don’t want to wear a holiday-themed mask with my cute sweater. I’d rather stay home.

I wish this was just about my penchant for holiday crafts. In reality, the future of the Valley’s independent local business scene is at stake.

The Hohokam settled this Valley thousands of years ago, but Phoenix as we know it today is still an adolescent. Twenty years back, you never would have seen a Crafeteria-size turnout on a Friday night in CenPho. Finding a restaurant (drive-thrus don’t count) open past 9 p.m. was an exotic fantasy. Thanks to Bryant and many like her, by the end of 2019, Crafeteria was one of dozens of crowd-pleasers around a town packed with restaurants, bars, shops and entertainment venues. It took a long time, but Phoenix finally hit critical mass. And then, almost overnight, the streets emptied. Christmas 2020 is a wash, as far as I’m concerned. I’m more worried about what will be left by the time we get to Christmas 2021.

Kimber Lanning, founder of Local First Arizona, thinks about it, too. Only the business owners willing to adapt will survive, she says. Gone are the days of the 17-page restaurant menu. “[We have] to be willing to let go of things that were only working marginally in good times,” Lanning says. “We just have to look at our businesses and be brutally honest.”

When I reached out, Lanning was ready with a list of creative ways locals have managed to stay afloat. Danzeisen Dairy now offers home milk deliveries, and you can reserve space at FilmBar for you and nine of your friends to watch any movie you like. I was happy to see Kathy Cano-Murillo and Emily Costello double the size of Mucho Más, their art shop and studio, this year, and a group has collaborated with Lisa Olson of Practical Art to create Roadside Attractions, featuring (mostly) front yard art all over the Valley.

But the truth is that there’s no guarantee that even the most successful independent businesses will make it. Chris Bianco, probably the most famous chef in town, has been pretty blunt on social media, worrying out loud about his employees and encouraging people to support his restaurants. Watching him try out new ideas – like freezing his pizza and selling it nationwide through Goldbelly, or switching restaurant spaces out to accommodate more people safely – is like watching a choreographer at work.

I’m pretty certain this isn’t Bianco’s last dance, but it’s painful to watch the city’s modern pioneers struggle. I remember when Chris opened his first pizza restaurant, when the first twinkle lights appeared in a gallery window on Roosevelt Street, and also when one of my friends called to say that a new boutique had opened at the corner of Central and Camelback. “You have to get over there now,” she said. “It’s like someone has our taste – but better.”

That someone was Bryant and the boutique was Frances. This summer, Bryant came out of quarantine to welcome appointment-only browsers to the store and beefed up her website. Holiday shoppers can find two local artists each week in the Frances parking lot.

But Crafeteria will go the way of trips to Santa’s lap – for this year, anyway. I’ll still buy gifts from locals, but it will be online. Apologies in advance if I don’t make it to your holiday cocktail party – it’s just not the same on Zoom.

And this year, I don’t feel much like celebrating.