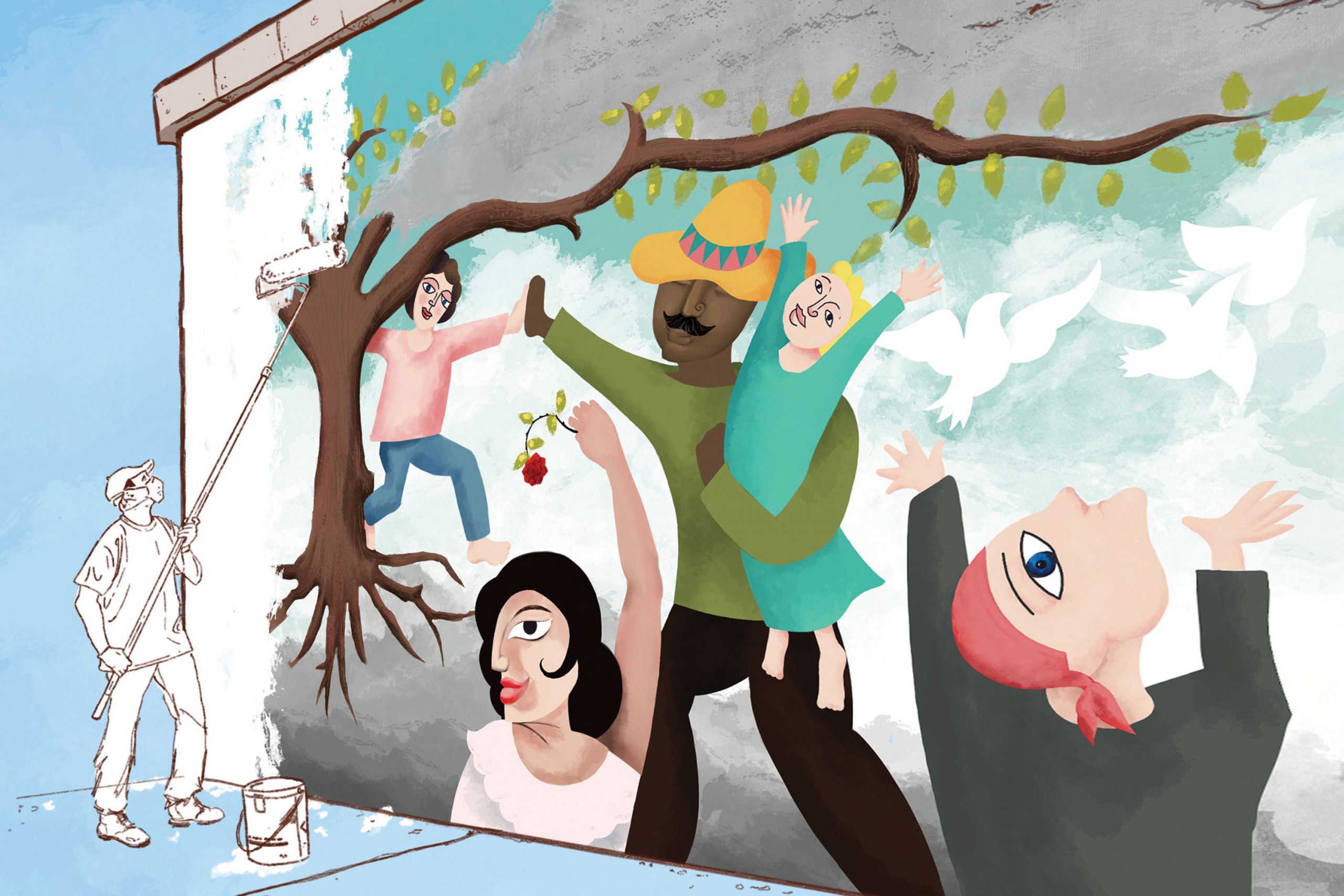 Our columnist explains why getting rid of problematic art – or artists – isn’t as easy as the swipe of a brush.

We’ve never been able to keep much alive in our backyard, but we have a cinderblock fence, so a few years ago I cajoled my husband into agreeing to a mural to brighten things up. “OK,” he said, “as long as it’s a cactus garden.”

Sold. I called David Quan – one of my favorite local artists, he goes by the street name Luster Kaboom – and within weeks the backyard was bursting with greens and blues, complete with images of our then-young daughters peeking out from behind the cacti. Way less painful than a tattoo, but just as addictive. As soon as the first mural was up, I immediately started planning for the next one. After all, I reasoned, we could easily paint the wall if we got tired of it.

Until recently, it hadn’t occurred to me that unlike a tattoo, a mural might actually belong to someone else: the artist.

It’s a fascinating legal byproduct of the topic I wrote about in last month’s column – namely, the Fortoul Brothers, who were largely erased from the public sphere when Isaac, the younger of the famed artistic duo, was accused of several instances of sexual misconduct. Their merchandise was swiftly pulled from boutiques and their art stripped from gallery walls. But nowhere was the backlash more visible than in the removal of murals bearing the artists’ signature bold, black-and-white figures.

I’ve reached out several times to the Fortouls and haven’t heard back, so I don’t know exactly what, if anything, they plan to do about it. Or what they could do. Turns out, there’s a rich history of court cases around the country, in which artists have sued property owners over the removal of murals, often under the Visual Artists Rights Act, a federal law. And they often win.

In 2008, muralist Kent Twitchell and several others settled a lawsuit against the federal government for $1.1 million after a 70-foot-tall mural of Edward Ruscha on the side of the Job Corps Center was painted over without notice. And then there’s the case of 5Pointz, the modern-day name for an 1892 building in Long Island City, Queens, New York, that originally housed a water meter factory. In the 1990s, the owner rented space for about 200 artists’ studios, and soon street art and murals covered the building’s exterior walls and garnered international acclaim. Several years later, that same owner decided to develop the property and whitewashed the walls without warning. The artists sued and a judge awarded them $6.7 million.

All of this got me thinking about the place murals have in our landscape – and how long they have it. By their very nature, these outdoor paintings are ephemeral. The sun makes them fade and crack, vandals tag them, asbestos beneath the paint might even make them dangerous.

Murals are not built to last, and for some people, that’s OK. Beatrice Moore is both a property owner and an artist. She has commissioned murals in her Grand Avenue neighborhood, and she’s painted them herself. She’s removed murals for reasons both practical, like when the bricks beneath one were disintegrating, and elective. Every mural has a lifespan, she says. “You have a limited number of walls that you can offer [and] you kind of get tired of looking at the same mural for 30 years.”

We discussed a mural that predates Phoenix’s mural boom, the “Prayer of St. Francis,” painted in 1998 by artist Rose Johnson on the sides of a now-former mortuary on 16th Street. Johnson passed away in 2009. For almost a decade, I’ve read stories about efforts to restore that mural. But each time I drive by, it looks worse – faded, tagged, covered in large blocks of paint.

“That one’s not restorable at this point in time,” Moore says, adding, “I’m not sure that [Johnson] would even want it to be restored… When you put things in the public space you have to accept that your work might get damaged and it might go away.”

As for my own murals (yes, I now have two – the second includes more desert foliage and our pets), I sent a hasty text to David Quan, asking if he’s had run-ins over his oversize outdoor artwork, and if he has any expectations for me. “I consider my murals as commissioned, and people can do whatever they wish when I am done,” he responded. “I feel fortunate to have people have my work, but I wouldn’t want them to feel bound to it, haha!”

So now I’m back to daydreaming about that third mural – and maybe a second tattoo, although I have a feeling I know which I’ll get first.