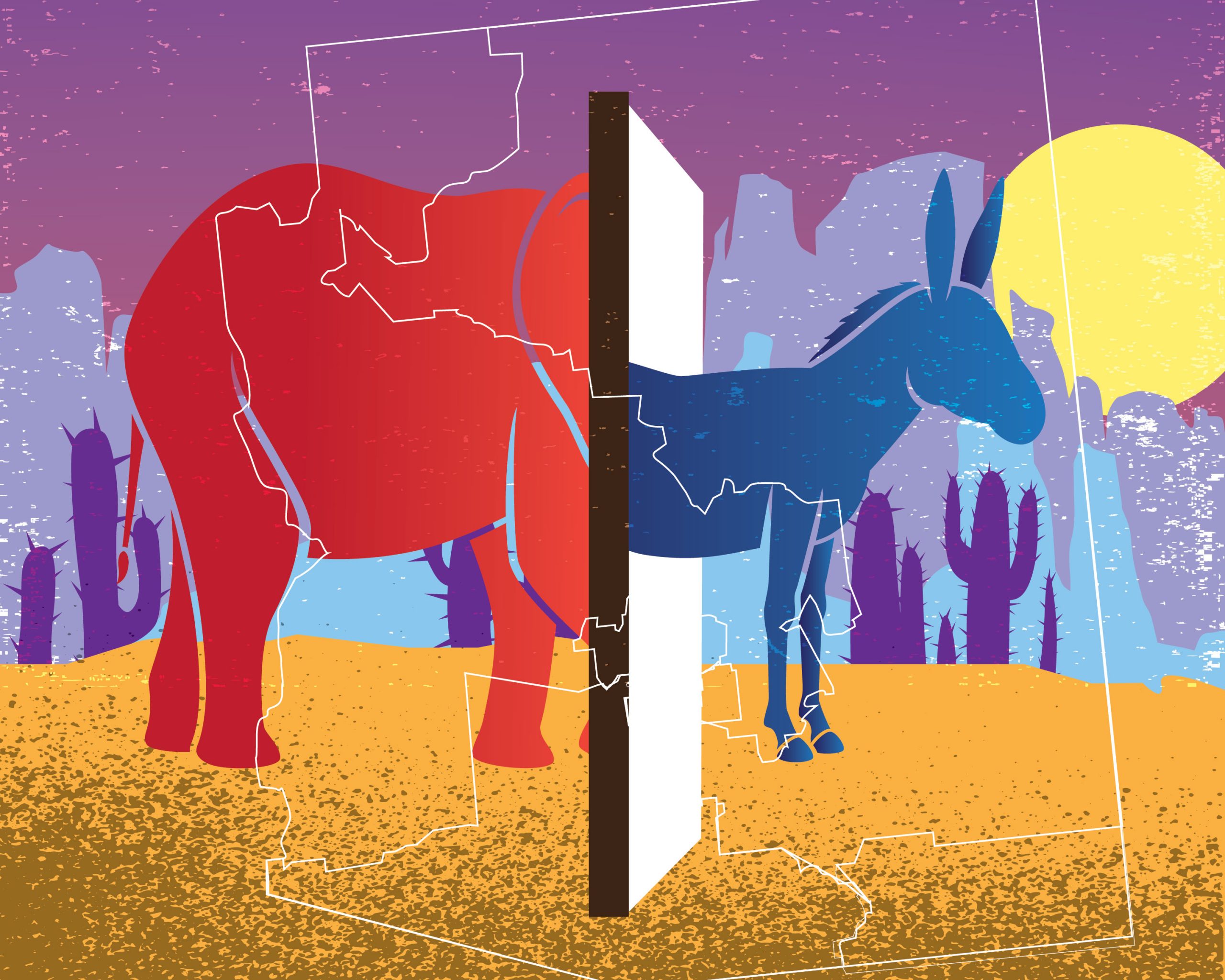 Democrats are investing heavily to oust Valley lawmaker David Schweikert from a deep-red congressional district. Will it be money well spent?

Sure things aren’t especially common. Here in the Valley, we know the summers are going to be brutally hot with high temperatures over 100 degrees. And, yes, all of us know the cliché about death and taxes.

But the realm of congressional politics also offers a near sure thing: Incumbents get reelected. Spanning the past three decades, about 90 percent of sitting members of Congress win when they pursue another term, largely a byproduct of noncompetitive, gerrymandered districts where one party holds a substantial edge in registered voters over the other.

Encompassing Scottsdale, Fountain Hills and a healthy swath of North Phoenix, Arizona’s 6th District fits that profile. Republican David Schweikert has successfully defended the seat three times since first winning the newly drawn district in 2012 – and the races haven’t been particularly close. In 2018, his margin of victory against Democratic challenger Anita Malik was 10 percent – a drop from 24 percent in 2016, but still a comfortable buffer. Arguably a “sure thing”-type of buffer.

So why do Democrats think CD-6 is ripe for a flip? Despite the party’s abysmal Election Day track record in the district, and a pronounced disadvantage in registered voters, the Democratic Congressional Campaign Committee (DCCC) has invested heavily in CD-6 for 2020 – based on a calculus that’s equal parts President Donald Trump, demographic shift and the perceived vulnerabilities of Schweikert himself. In a state short on true battleground congressional districts, it makes for an odd but intriguing gambit.

“I think Democrats thinking they’ll beat Schweikert isn’t something really grounded in sensible, political reality,” Valley-based Republican consultant Stan Barnes says. “Having said that, the year 2020 is the kind of year where anything can happen.”

The DCCC has been openly coveting the 6th District since January 2019, when it listed Schweikert – then in the early phase of a House ethics probe for campaign finance violations that concluded this summer – among 33 “vulnerable” GOP House members it hoped to unseat in November 2020. Not coincidentally, Democratic challenger Dr. Hiral Tipirneni, evidently with the firm backing of the DCCC, declared her candidacy for CD-6 just two months later.

It was a move that surprised many pundits. At the time, Tipirneni was considered something of a rising star in Democratic circles after coming within five points of beating Debbie Lesko in the 2018 special election to replace Trent Franks in the West Valley’s deep-red 8th District. To that point: Tipirneni actually lives in the 8th District, Glendale specifically, not in the Scottsdale-based CD-6.  Mainly Republican cries of carpetbagging inevitably followed.

With its marquee candidate in place, the DCCC worked to provide its CD-6 campaign with the other essential feature of a battleground district: money. By July 2019, Tipirneni had raised $440,000 – a record sum in the district for a three-month cycle, according to the DCCC. Fellow Democratic candidate Malik, who does live in CD-6 and gave Schweikert his most competitive November battle since 2010 two years ago, was subsequently steamrolled by the better-funded Tipirneni in the August 2020 primary.

Did the DCCC’s apparent preference for Tipirneni bother Malik? “I’d be lying if I said it didn’t,” the former media professional says. “Knowing that this was decided by what I look at as a money-in-politics issue ahead of time, it was definitely extremely frustrating for me. I think there was something at play here that should have been left to the people of the district and not to this outside influence coming in.”

At first blush, the demographics in CD-6 don’t appear to bear out the Democrats’ aspirational posture in the district. Republicans hold a 9-point advantage in registered voters, according to the Cook Partisan Poll Index, and 70 percent of its residents are white – a demographic that tilts toward Republicans nationally. Moreover, Trump won the district by 9 points in 2016.

In an ironic twist, the DCCC may be banking on Trump fatigue to help turn the district. According to a CBS News/YouGov survey in September, Trump was trailing rival Joe Biden among suburban voters by 2 points nationally after carrying them by 7 points in 2016. Nathan Gonzales, editor and publisher of the nonpartisan Inside Elections, says that could hurt Schweikert in largely well-educated, affluent CD-6: “The president is struggling in the suburbs, and when you overlay that with CD-6 and its large number of college-educated voters, that becomes problematic for all Republicans that are on the ballot.”

An old-school conservative focused more on debt and deficits than the cultural wedge issues favored by Trump, Schweikert may be insulated from some of the blowback. Orating at the mega Dream City Church in the North Valley last spring, Trump referred to Schweikert as one of his “warriors,” but the 58-year-old lawmaker is hardly a Paul Gosar-style MAGA operator, despite the DCCC’s attempts to paint him that way.

To the Democrats’ encouragement, there are signs of modest demographic shift in CD-6. Double-digit loss aside, Malik’s showing in 2018 was better than expected, and the district’s small but growing population of Asian-American voters, who constitute 5 percent of CD-6 and are its third-largest minority, could mobilize in support of Tipirneni. (According to the National Asian American Survey, Asian voters are more than twice as likely to register as Democrat than Republican.)

Ultimately, however, the Democrats’ hopes for a flip may rest with voters like Fountain Hills resident Tiana Channer, who moved into the district eight years ago and found herself inspired to volunteer to help a Democratic candidate for the first time, because of the killing of George Floyd in Minneapolis. She won’t be supporting Schweikert. Channer is white and says racism has become a top voting issue for her.

“It’s not OK to just be silent anymore,” Channer says. “We’ve got to turn the tide and get rid of some of the hate, the willingness to look the other way when things that we know aren’t OK continue to happen.”

But are there enough Tiana Channers in North Phoenix, Scottsdale and Fountain Hills to flip one of Arizona’s four deep-red districts? The DCCC is pushing the narrative that Schweikert’s House Ethics Committee investigation – which wrapped up in July with him admitting to 11 ethics violations and paying a $50,000 fine – may tip the scales. Undoubtedly, the investigation was a distraction to the lawmaker and disrupted his usual fundraising and campaign rhythms, but whether voters care is another matter.

“It will hand a stick to the Democratic nominee to swing at David Schweikert’s kneecaps in the public square about his fitness for the office,” says Barnes, the Republican political consultant and former Arizona lawmaker. “[But] you’d have to spend millions of dollars selling that storyline in order to make a dent.”