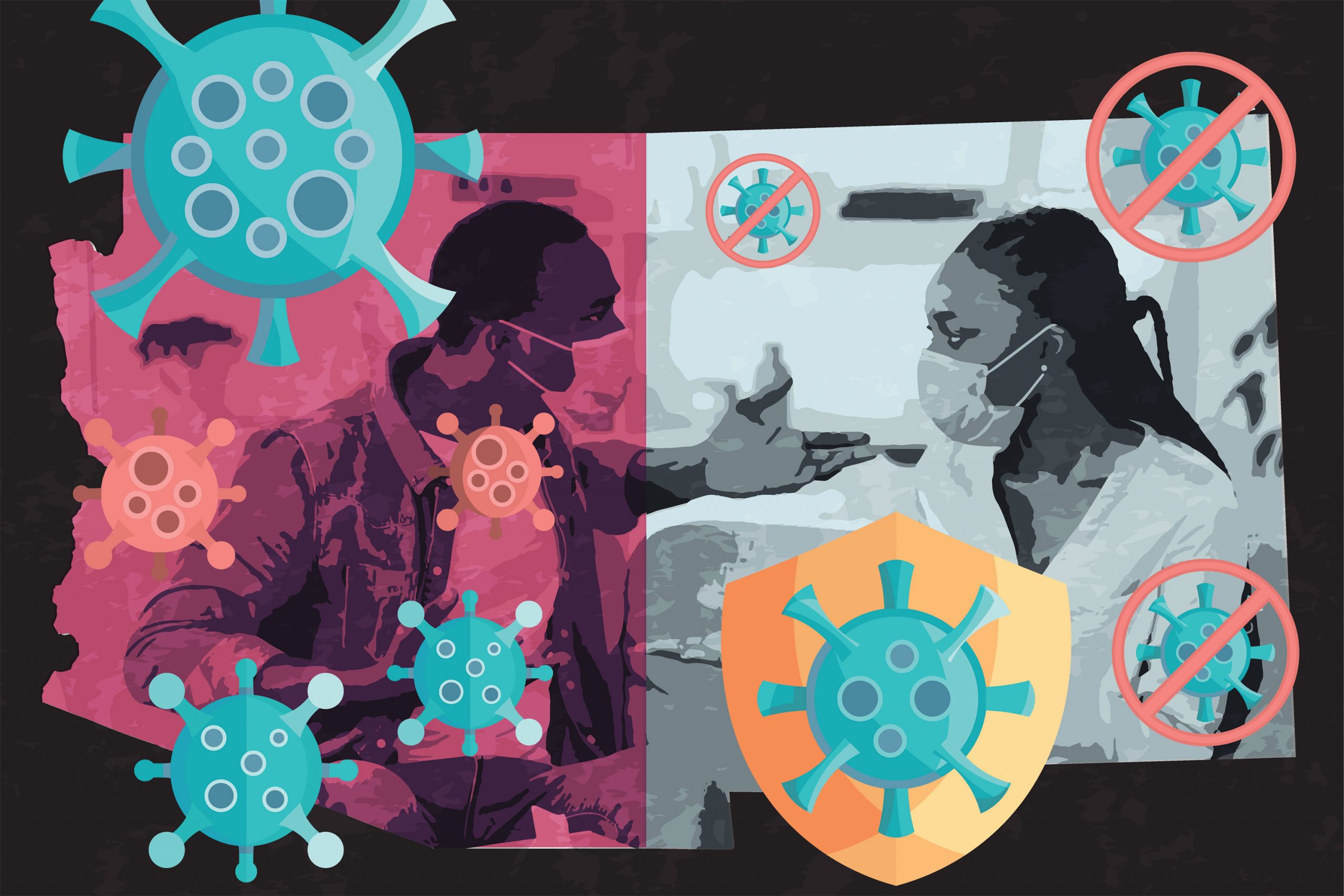 New Mexico and Arizona fought differently in the COVID-19 battle. Now the states are pitted against each other in the recovery process.

In a full-page ad running twice in The Arizona Republic over the Fourth of July holiday weekend, the New Mexico Tourism Department cordially reached out to housebound Phoenicians itching for a summer road trip – while tactfully reminding potential visitors that New Mexico’s COVID-19 rules for the season were a lot more stringent than Scottsdale’s.

“Dear Phoenix,” began the copy, written in the form of a friendly letter. “We can’t wait to see you once the world is safe to travel again.” In the meantime, though, Arizonans craving the Land of Enchantment’s natural splendor and “chile-centric cuisine” were advised to learn the state’s stricter rules before planning a visit.

“It’s nothing complicated,” continued the ad, which replaced the more welcoming campaign typically run with the state’s $13.5 million marketing budget each summer. “Just a few simple guidelines like social distancing and wearing a face mask. We realize it’s not the most comfortable thing to ask a neighbor. But we’re in this together.”

As individual states have been forced to create their own paths to a new normalcy under the still-looming pandemic, Arizona and New Mexico have provided what The Washington Post dubbed a classic tortoise-and-hare contrast in the race to pandemic recovery – with New Mexico’s slow and steady tortoise the clear winner over Arizona’s swift-to-reopen hare. In the months since each state began reporting diagnosed cases of the virus, New Mexico has never reported more than 12 COVID-19 deaths on a single day, while Arizona peaked at 172 – roughly five times as many, per capita, as its less populated neighbor.

The split in strategies began showing in May, when Lujan Grisham extended New Mexico’s emergency public health order and issued statewide mask requirements the same week that Ducey allowed Arizona’s stay-at-home orders to expire without issuing a statewide mask requirement. In the ensuing weeks, Arizona’s infection rate, which had previously been lower than that of its neighbor, would soar to three times the rate of New Mexico’s.

That’s when Arizona’s border mate began rolling up the welcome mat. On July 1, Lujan Grisham, who served as state health secretary prior to becoming governor in 2019, issued an executive order requiring visitors from all locations outside New Mexico to self-quarantine for 14 days upon arrival in the state. That travel quarantine was still in effect as of press time.

In her July 9 press conference, citing data that about 10 percent of New Mexico’s COVID-19 cases come from out-of-state visitors, Lujan Grisham particularly called out Arizona and Texas, where modified versions of the “neighbor” ad also ran in the largest cities’ papers. “We don’t want you here now,” she said flatly, rebuffing the more than $1.5 billion in annual revenue tourism from those two states normally brings in. “We want you. Just not right now. We can’t have the exposure.”

Arizona’s reduction in cases came after a number of backsteps in Ducey’s reopening plan. On June 27, he “paused” the reopening of bars, gyms and other high-contact businesses and limited indoor and outdoor gatherings to no more than 50 people. On July 11, he further limited dine-in service at restaurants to 50 percent capacity, and on August 10, he released new guidelines for a phased reopening that more closely followed CDC benchmarks.

Meanwhile the gains in business activity Arizona scored over New Mexico though April, May and June dissipated in July, according to the Opportunity Insights Economic Tracker, a Harvard-developed tool that provides real-time analysis of data such as consumer spending and job postings.

Among New Mexico residents, some anti-Arizona sentiment remains. A recent letter to the editor of the Santa Fe New Mexican proposed the state close its borders to Arizona and Texas and “start screening for ignorance” (“I was serious,” says the author, a Santa Fe psychotherapist).

Officially, however, the states remain cooperative. Since March, New Mexico hospitals have been accepting overflow coronavirus patients from Arizona, transferred in accordance with a federal law that requires hospitals to accept patients from neighboring states if they have the capacity and capability. Most of those coronavirus patients have come from the Navajo Nation in Arizona and some small towns in Pima County.

“Of course, at no point do New Mexico hospitals allow transfers to affect their ability to care for patients in our state or tax their limits of their ability to take care of in-state residents,” says New Mexico Department of Health spokesperson David Morgan.

Still, as Lujan Grisham complained to the press, “That means New Mexicans are going to have to have even more personal responsibility than many other Americans.” 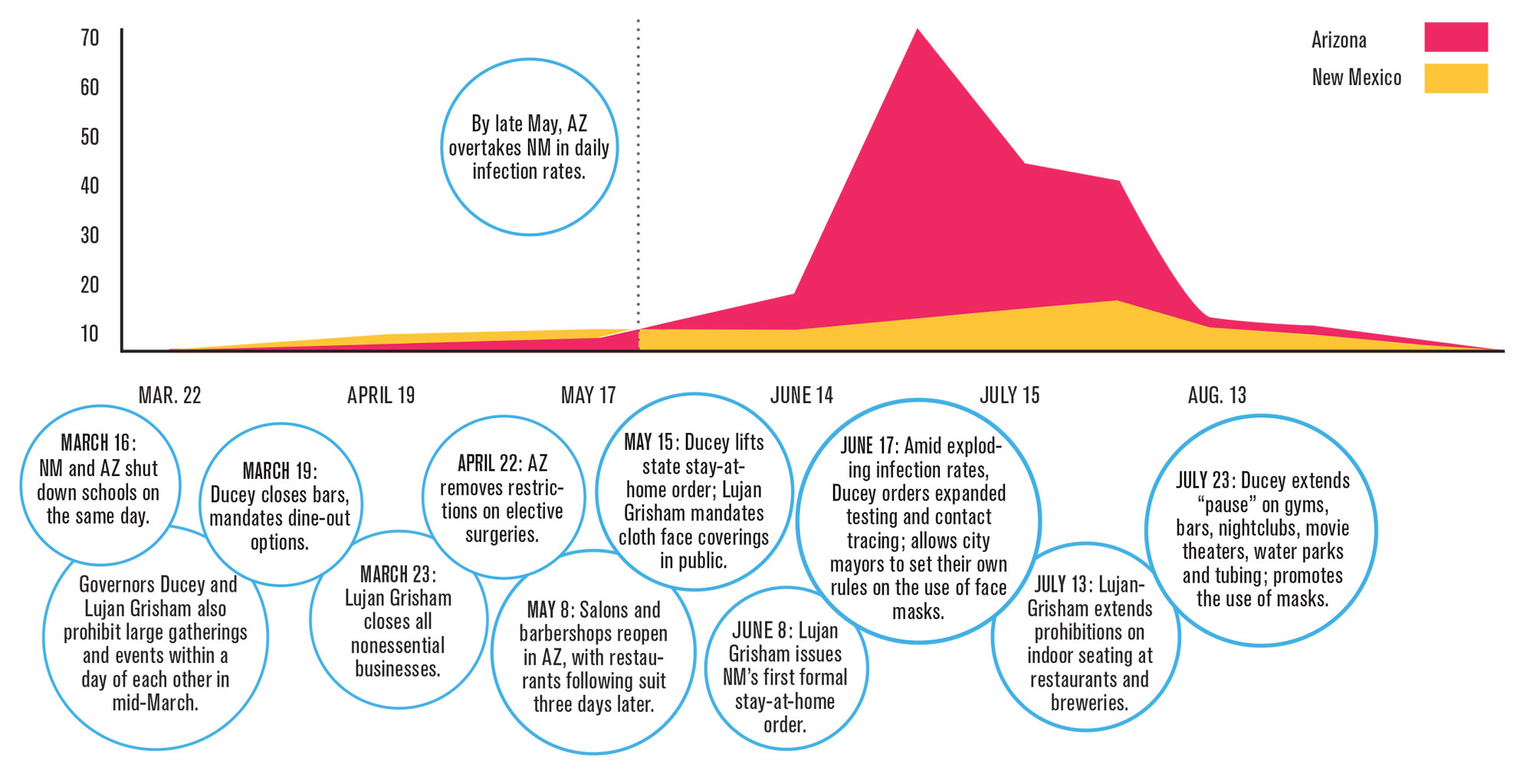