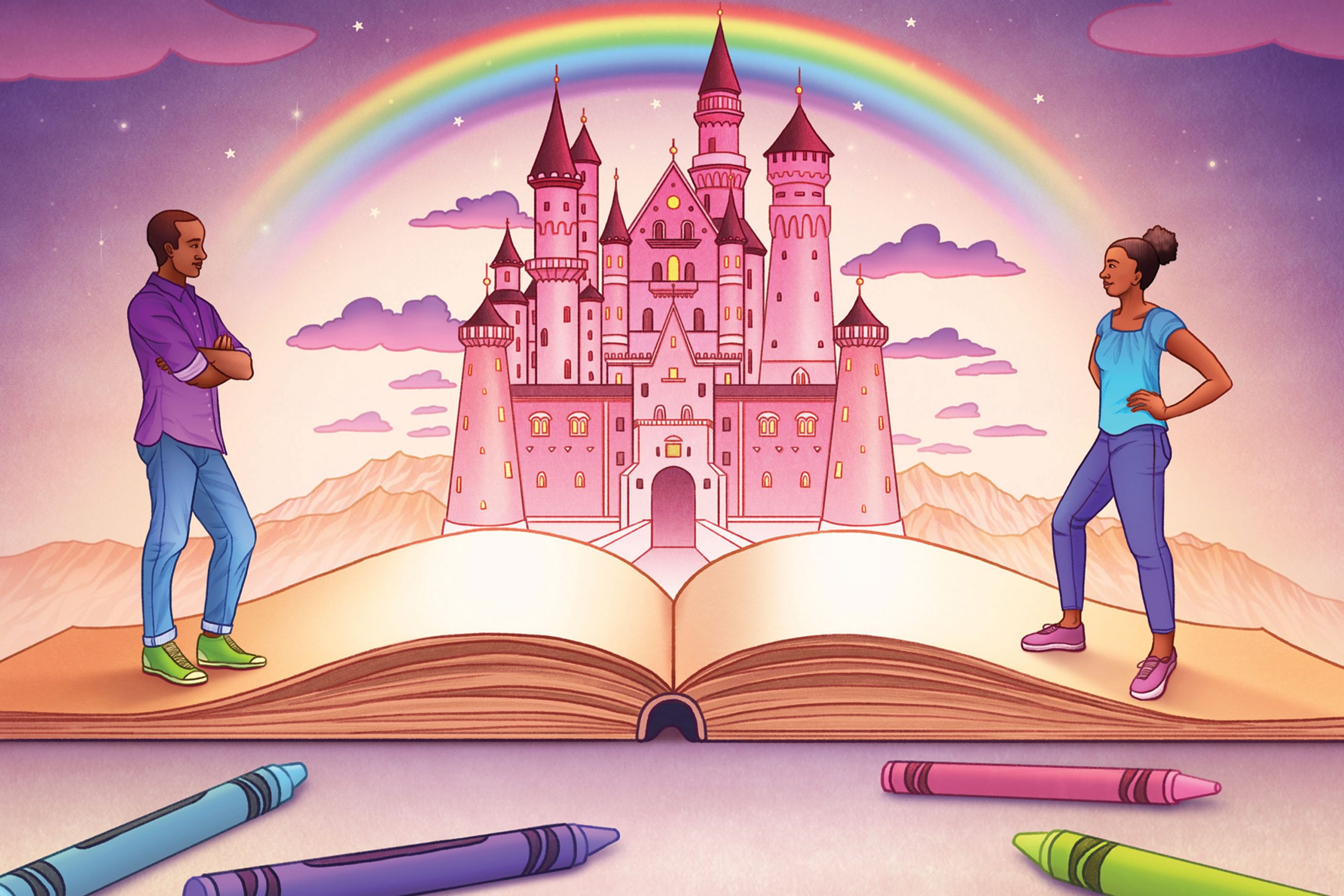 Years ago, when her little sister acted up in church, Twishime grabbed paper and pens, drew some simple outlines and gave the girl a handful of crayons. Her sister kept quiet. Mission accomplished.

But something wasn’t right. Twishime, who along with her family is black, noticed that without thinking about it, she’d drawn white princesses with straight hair for her sister to color. “I noticed that a lot of the images I was trying did not necessarily look like her ’cause she is a black girl with curly hair. I realized I should probably do something that is more representative of what she looks like, so it’s also a way for her to appreciate her features,” Twishime says.

She changed it up and handed new pages to her sister, this time featuring black girls. “She was like, ‘Oh my God, her hair is beautiful.’”

“And so that just goes to show that when we see other images, we can appreciate the beauty within them,” Twishime says. “Sometimes we just need to show that beauty comes in all different shapes, sizes and colors for kids to appreciate.” A mission was born. Twishime saved money for a tablet, and this spring, when the world shut down, she had time to pursue the project in earnest. The summer’s protests were a coincidence – like so many people, Twishime thinks about racial disparity every day, not just when the topic emerges in the headlines.

Twishime, 20, is a junior at Arizona State University, where she’s majoring in medical studies. Her younger brother and coloring book collaborator, Pleasure Nsabimana, is 16 and a senior at Bioscience High School in Downtown Phoenix. Born in Rwanda and raised in South Africa, they moved here with their family in 2010 through the International Rescue Committee. (In Rwanda, it’s common for families to give children different last names.) The family knew nothing about Phoenix. “When you’re a refugee, trying to find a place to seek refuge, as long as it’s a place other than where you are, it’s fine,” Twishime says. “And my dad remembered the Grand Canyon. And so they knew it was really hot in Phoenix – but there was the Grand Canyon.”

Life here has been good, both Twishime and Nsabimana say, but as in South Africa, they’ve been raised mostly around white kids. Twishime thinks that’s why she drew straight-haired princesses for her sister without even thinking about it. Unlike a post on Instagram, “you can sit with it, you work with it for a couple of hours or a couple of days or a week,” Nsabimana says.

Twishime initially wanted to market the book to just little girls, then realized the audience can be broader. “Initially it was meant for young black girls, I would say ages 6 to 12, but I realized that any child of any racial background or gender can learn some things from the coloring book. I would say, even a white girl can realize that brown is a beautiful color to use in coloring book pages… Also, even a boy can appreciate the coloring book.”

And adults, I added, thinking of the coloring book craze.

Twishime and Nsabimana are calling their company Crown Coloring Books and the first one, which will be self-published, is titled I Can Be Anything. It will be available on amazon.com.

Initially, they wanted to sell the books with a set of crayons that included different shades for a wide variety of skin types, but crayons are hard to make. So for now, it will just be the books.

The siblings describe the effort as collaborative. Twishime comes up with the concept for each page, including sketches and a mood board, then Nsabimana draws the final product. He’s got a cartoony style that lends itself to a coloring book. Their little sister, now 7, even drew some flowers. Another brother found inspirational quotes to include on the back of each page.

The goal of the coloring book isn’t just to enlighten people about looks. “We had an intention behind every page,” Twishime says. “For example, one of them depicts a girl working as a doctor or a nurse. And that was really important for me, because in the U.S., African American women have the highest maternal mortality rates, and part of it can be attributed to institutionalized racism. And one way that that issue can be fixed is by increasing diversity within health care.”

One page at a time.