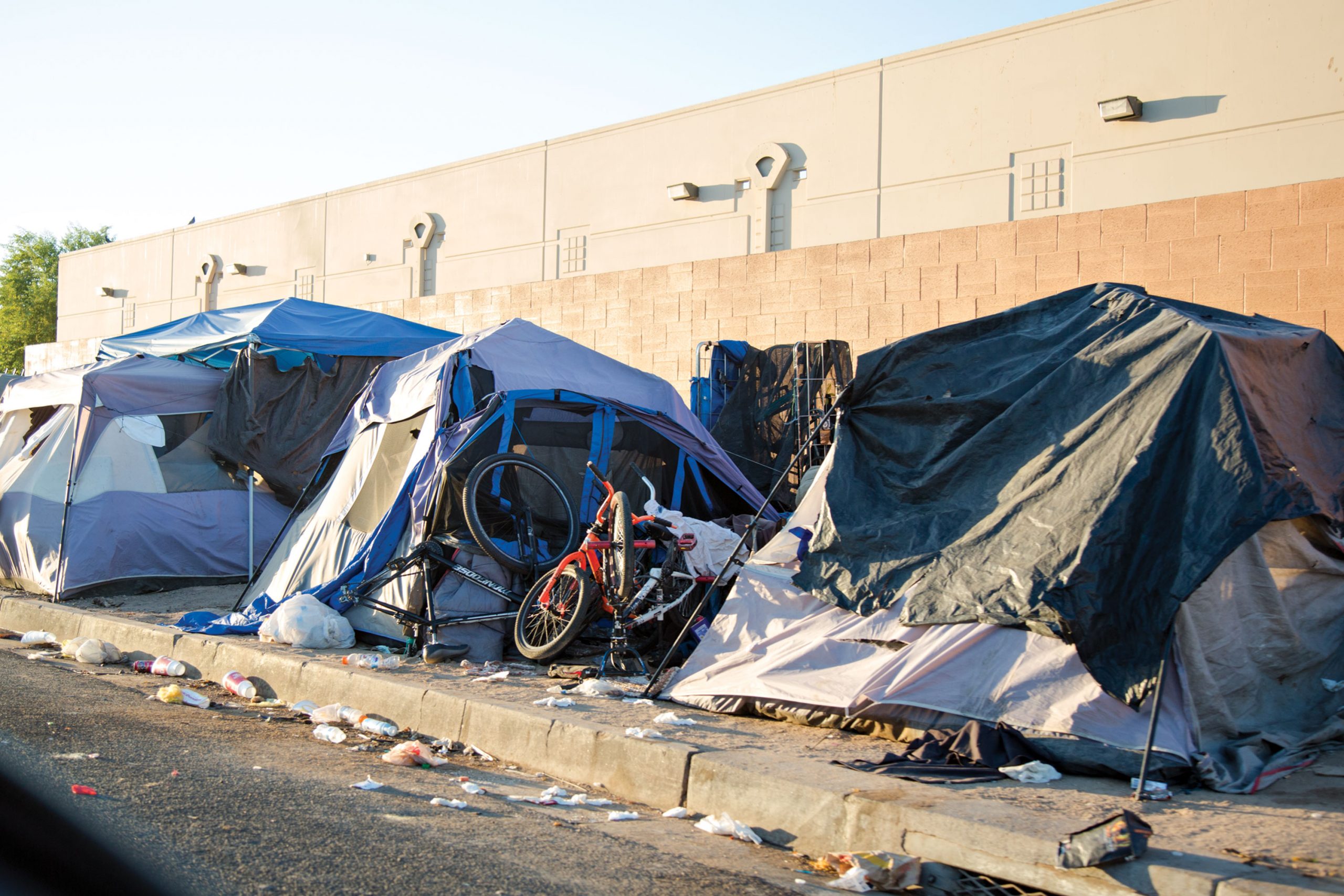 An encampment near the Andre House in Downtown Phoenix; Photo by Angelina Aragon

Once invisible, homeless encampments are the new scourge of app-equipped neighborhood watchdogs in the work-from-home era.

When Sarah Tokosh met Brad Ray, she was delivering dog food to a husky belonging to a panhandling woman she’d met on Facebook, and he was a homeless, unemployed construction worker living not far from the woman and her dog in Cortez Park in West Phoenix.

Tokosh noted that Ray was also struggling with food insecurity, and on her next visit, she returned to the park with food for him and his dog as well. Over time, the two began to bond over a shared love of dogs, sense of humor and life philosophy. Four nights after their first dinner date, Ray was jailed for trespassing after sleeping in a school parking lot. Tokosh picked him up, let him sleep in her truck parked at a local bar and, soon after, the two moved into a rented home in North Phoenix together.

“You know, there are some amazing people out on the streets,” says Tokosh, who works as a teacher’s aide for the Paradise Valley school district, while Ray searches for another job in construction. “But sadly, they’re not ever given a chance to show us who they are.” Today, Tokosh and Ray run a nonprofit outreach for people experiencing homelessness called Never Alone. The couple – along with Shawna Ziegler, the woman with the husky – solicit donations on Facebook then distribute what they collect (“mainly hygiene products and clothing, snack bags, water,” Tokosh says) to homeless encampments in their part of town.

“A lot of the people that we go see are people that I was homeless with,” Ray says. “And I know where to find them. We’re in contact with them constantly. We’ll get text messages at 3 in the morning saying, ‘I’m scared,’ ‘I’m lost,’ ‘I’m stranded.’ And, you know, these are all folks that we’ve known for a while and are close friends with.”

At a time where many of us are newly discovering the homeless in our midst, thanks to more frequent walks around the parks and alleys that we rarely circled before stay-at-home orders, Tokosh’s and Ray’s story is inspirational – but far from the norm. “I think it’s a really eye-opening experience for people just walking around their own communities and seeing people sleeping in their cars, because we don’t normally look for it,” says Jessica Boehm, a reporter who covers homelessness and housing insecurity for The Arizona Republic. She blames a worsening shortage of affordable housing as the main driver, compounded by the current unemployment crisis. “It’s something we really need to think about addressing from a holistic perspective.”

That’s seldom the tack suggested, however. On the website Nextdoor, a hyperlocal social media platform that’s become a kind of neighborhood watch for the digital age, posts abound from nervous homeowners calling for law enforcement to remove the homeless from their areas. “We have people camping in our park, urinating behind our signs and bushes,” writes one woman in Tokosh’s and Ray’s neighborhood, echoing a complaint voiced by residents around Tempe Town Lake, too. “They need to move on.”

But to where? A 2018 ruling by the 9th U.S. Circuit Court of Appeals barred police from ticketing or arresting people for sleeping in public if a bed at an emergency shelter is not available, and even before the pandemic, city shelters were filled to capacity. According to the January 2020 point-in-time homeless count by the Maricopa Association of Governments (MAG), 51 percent of the county’s 7,419 homeless were sleeping out on the streets, an 18 percent growth in what MAG calls “unsheltered” homeless over the past year. Social distancing measures have limited space in shelters even more. Representatives for the Human Services Campus at 12th and Madison avenues in Downtown Phoenix, which provides 470 out of the roughly 1,000 emergency shelter beds available for single adults throughout Maricopa County, say the campus has been turning away about 500 people every month for lack of space.

The Phoenix City Council is currently debating whether to add an additional 500 beds on the campus, but Boehm says residents and business owners in the area complain that their already impoverished community has been asked to “shoulder the burden of homelessness for the entire county for years,” and would rather support the creation of smaller shelters scattered across the Valley. An online map produced by MAG shows large clusters of unsheltered homeless around Glendale, Tempe and Mesa, with probably the largest encampments (apart from Downtown) around North Mountain Park and Sunnyslope.

Smaller, more neighborhood-based shelters would also provide greater safety to an already vulnerable population. Kat and Scott Pollard, who together run the Bridge for Community Services, a nonprofit that provides meals and clothing outside the Human Services Campus every Sunday, say that for those who don’t score beds inside the building, sleeping within the fenced outdoor lot can be perilous.

“They call it ‘the zone’ down there for a reason,” Kat says. “It’s a war zone. Women have gotten raped and beaten, and a lot of people get robbed. One reason that the homeless flow into our neighborhoods is because they don’t feel safe down there.”

Until more shelter space can be created, Tokosh recommends making public spaces more hospitable to those experiencing homelessness. “Since the COVID situation hit, a lot of the parks have shut off the water fountains,” she says. “The bathrooms have been closed since March” – not only in the parks, but in many of the gas stations, too (“Except for QT,” Tokosh adds).

In the meantime, Ray says what the homeless need is the one thing we’ve all been requesting from others since the pandemic hit.

“Patience,” he says. “Everybody wants to just snap their fingers and say, ‘OK, we gave you everything you need. How come you’re not better? How come you’re not a productive member of society?’ Well, the mental’s got to catch up, too. It’s a long process. What we really need from people is just patience.”