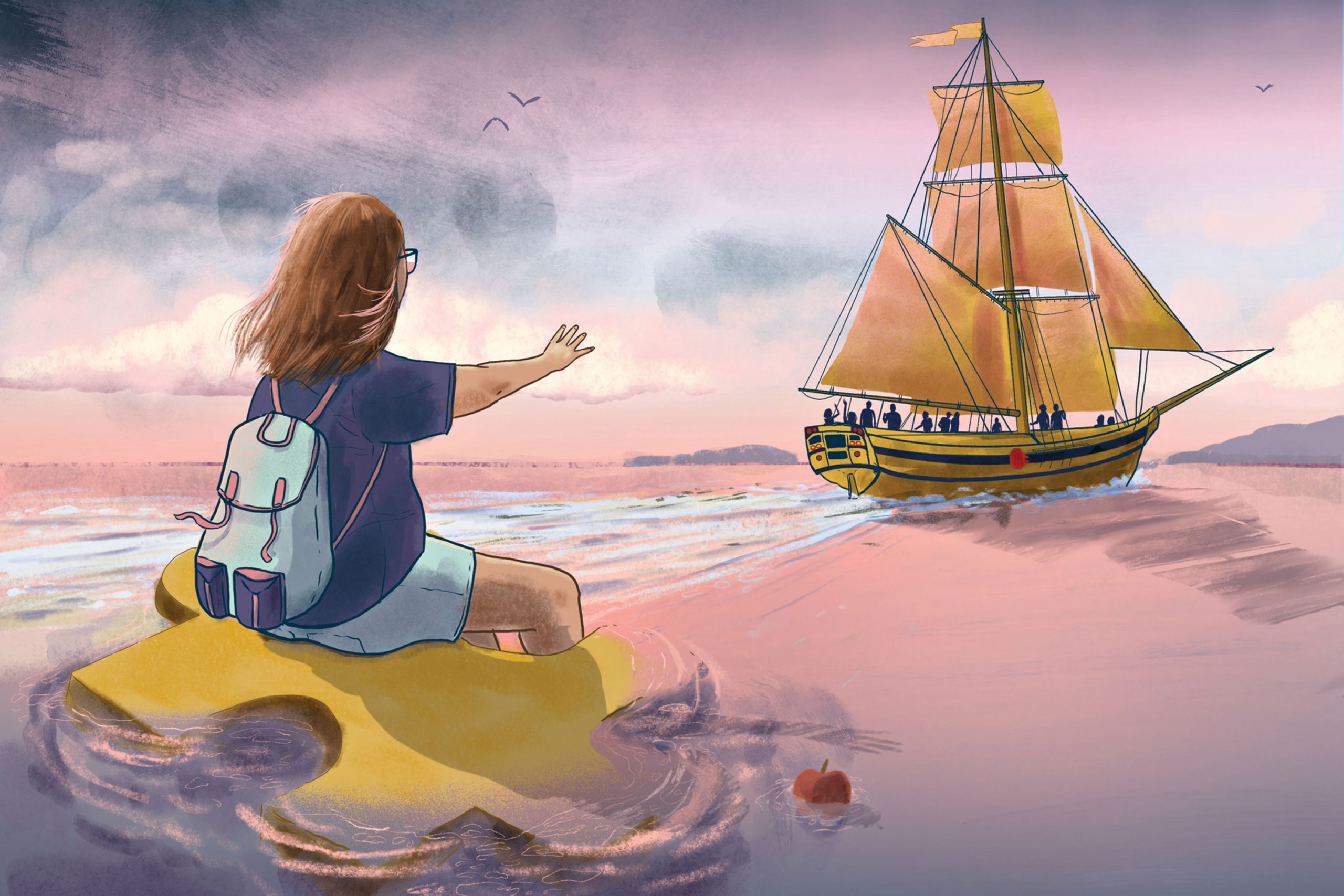 A few weeks ago, I bought myself a quarantine present – a small painting that depicts a woman in a boat on a deep blue sea, clutching a sphere that looks like Earth. It’s a lovely image, but it’s the title that really got me.

She looked for somewhere she could keep her world safe.

As we stare down the beginning of the school year, I find myself clutching my world a little tighter. OK, a lot tighter.

It was so much easier this spring, when we had no choice. It was sudden and gut-wrenching, but freeing in a way. Schools were closed. We all stayed in. Period. But as we move from figuring out how to hunker down in a short-term crisis to how to poke our heads into this new reality for the long haul, I find myself ending all my sentences with question marks rather than periods.

I don’t know about you, but the more I read about COVID-19, the more I’m convinced that we are all flying blind. We really don’t know what the risks are, for anyone. New information comes out every day and it feels like we’re putting together the pieces of one of those giant jigsaw puzzles so many people are working on to pass the time.

It’s going to be a long while till we can see the picture that’s just starting to emerge. Meanwhile, school is looming, and I’d rather stab myself in the eye with a sharpened pencil than make the decision before me.

My younger daughter, Sophie, thrived during the first weeks of quarantine – finishing her junior year of high school, turning 17. There were tears over a missed class trip to Chicago, canceled dance recitals and an abrupt halt to restaurant dining and trips to the mall, but she found joy in family movie nights (every night) and settled into new routines like a daily Yahtzee game over Facetime with her dance teacher and Mad Libs with a family friend.

I was worried, at first, that Sophie wouldn’t completely understand why we were all locked up together. Sophie has Down syndrome, and while I often feel that she’s the wisest person I know, she doesn’t always have the walking-around sense she needs to face the world. For instance, will she understand how to act at school during a pandemic? This is a kid who sucks her thumb when she thinks no one’s looking, who lives to hug her friends.

Sophie’s never even tried on a mask. We’ve kept her in the house since mid-March. I’m not just a helicopter mom at this point – I’ve landed on my kid’s head and I can’t stand the thought of letting go, even as we both twist in the wind. I know parents all over the world are feeling this way, but for Sophie the stakes are a little higher than average. She has a compromised immune system because of a heart defect and a thyroid disorder, both common to Down syndrome.

We are not alone. I see Sophie’s beloved kindergarten teacher agonizing on social media. She has asthma; how can she stay healthy around two dozen snot-nosed 5-year-olds? What about kids who live with grandparents and other older adults who are at extra risk?

I could keep Sophie home, keep her safe. But would she survive missing her senior year, particularly if other kids are going back? Sophie has the worst case of FOMO I’ve ever seen – and I get it, she has struggled to be included her entire life. I’ve consulted with special education attorneys, teachers, medical professionals, other parents of kids with Down syndrome. I’ve watched the governor open up the state and refuse to wear a mask as hospital companies sound warnings about capacity.

I know that Sophie, who has subsisted for months on hugs from her sister, dad and me, won’t be able to resist when she sees friends. I know that she will get hysterical if I keep her home and she sees her friends back at school, posting on Snapchat and TikTok.

Amy Langerman, an attorney who focuses on special education law, says Sophie should go back to school. “Her needs include her social needs,” she says, “so we have to figure out a way to get her there safely. I don’t know what that means. Maybe it means she goes to school in a bubble, and she gets to be with her peers, but she has a plastic sneeze guard around her. She maybe can’t go into the cafeteria, or maybe she can’t go a full day.”

As Langerman talked, I nodded and smiled and thought to myself, “No freaking way.” I remembered the movie The Boy in the Plastic Bubble, when John Travolta tore away from his protections and ran off to live his life – however long it lasted. It was a happy ending, but it wasn’t the whole story.

I’m going to have to hold my world tighter and think about this one a bit. I don’t have much time. Maybe that’s the one thing we can all be certain of.