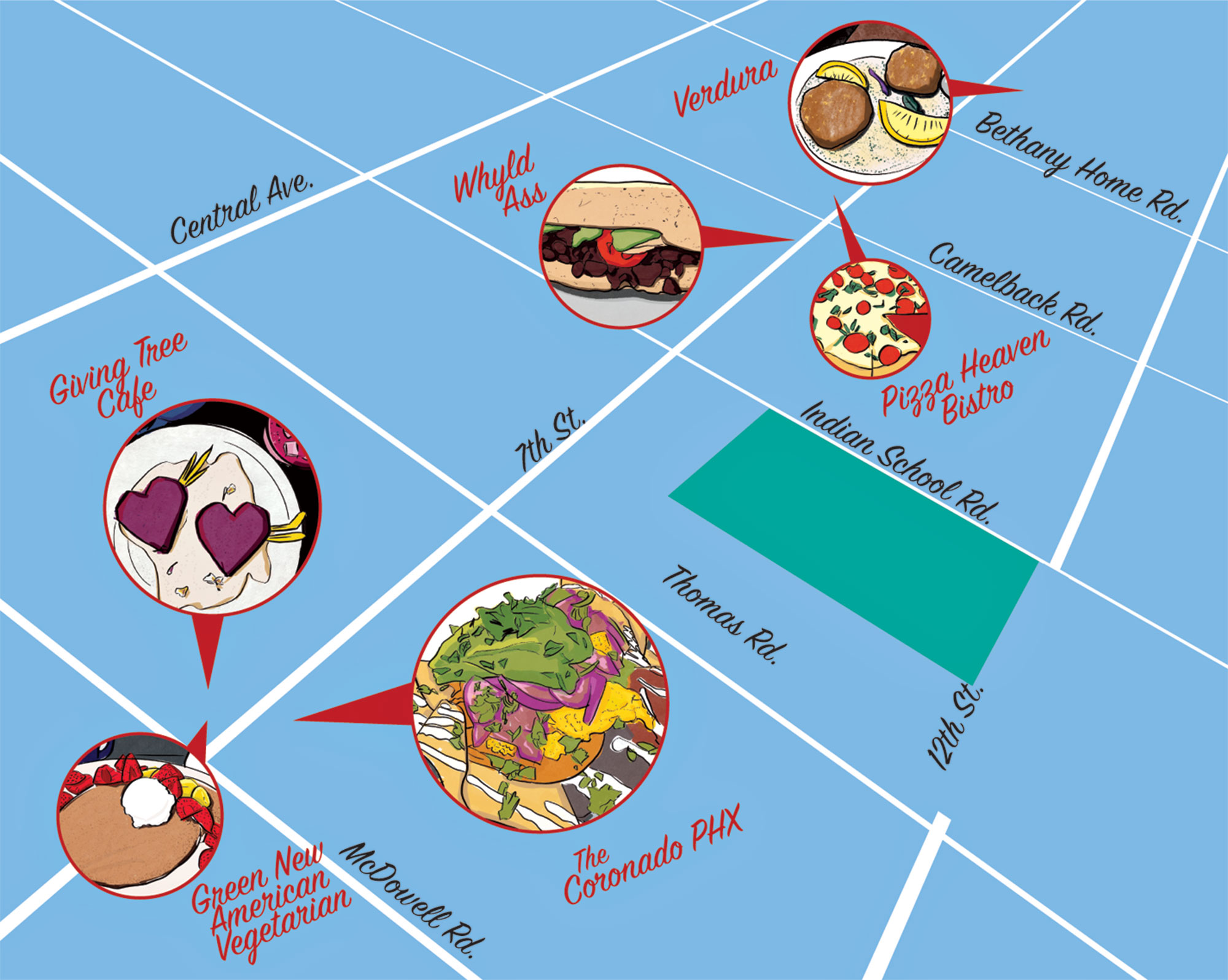 Every U.S. city worth its culinary salt has a street known for its restaurants: Bourbon Street in New Orleans, Broadway in New York City, Seventh Street in Phoenix.

While Seventh Street doesn’t have the reputation of some other cities’ “eat streets,” it does have six vegan restaurants along a 3.4-mile stretch. Restaurateurs came for the historical buildings and stayed for the community and culinary cachet.

Damon Brasch opened the first vegan restaurant on Seventh Street, Green New American Vegetarian, in 2010, inside the former Los Olivos Grocery Store building. “I wanted to save these buildings because in Phoenix, you don’t have that ‘old building charm’ that a lot of other places have,” Brasch says. “That’s one of the things I like about the other restaurants along Seventh Street. The Coronado PHX is in an older house. It’s nice to get that feeling of flavor and history.”

Coronado PHX co-owner Elle Murtagh grabbed the property in 2015. “The Coronado Café had been in that little house for years and was a big inspiration as far as pushing the parameters of what you can do out of a little bungalow house in Phoenix,” Murtagh says. “It just has this welcoming, familiar vibe that you just cannot replicate.”

The area’s reputation for historical preservation and environmental conservation attracted many vegan restaurateurs, including Keith Wyatt, who opened experimental “comfort grub” eatery Whyld Ass along the stretch in 2018. “Seventh Street, as long as I have been in Arizona, has been unofficially labeled as ‘Vegan Street,’” he says.

Another point of pride is the diversity of cuisines. While establishments like Green and Coronado PHX offer plant-based takes on new American favorites, Giving Tree Café serves all gluten-free salads, sandwiches and soups. At the far north end of Seventh Street, vinyl-record-themed Verdura’s well-rounded vegan and kosher menu boasts some of the best breakfast options around.

Pizza Heaven Bistro added a vegan menu in 2005. “I think we’ve all done a great job of offering different vegan selections,” owner Patricia Hasbun says. “I am very proud to belong to such a welcoming, hardworking and ever-expanding community.”