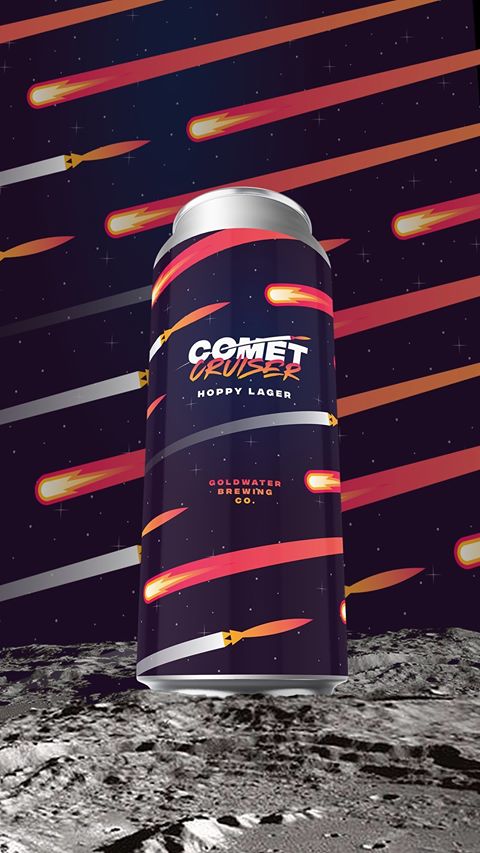 Head into the long holiday weekend as a beer boss, a suds stud or an IPA MVP by picking up one of these brand new craft beer releases from breweries around Arizona.

New Beer releasing for Pre-Orders THIS Friday at 10am! Comet Cruiser – Hoppy Lager is a 4.7% single hopped American light lager brewed with Comet Hops giving it refreshing notes of dank tangy grapefruit and tropical fruit. Cruise over to our website this Friday to place your order! 🚀☄️

NEW NEW NEW. POOL BOY WALLY For sale via our online store tomorrow (Thursday) at 9am. Extended pick up hours tomorrow from 9am to 8pm. Friday 9am-7pm. . POOL BOY WALLY In an attempt to make summer more tolerable, we’ve whipped up an ultra-refreshing Wally for you all. We achieved an incredibly hop saturated triple IPA, thanks to its Dreamy Draw like body/mouthfeel & loaded with Southern Hemisphere hops—Nelson, Motueka, Enigma. The grain bill is a nice mix of Canadian pils malt, @grainrandd raw Sonoran white, malted white wheat, and flaked oats. Bunch of strata in the whirlpool. Then dry hopped slightly above our normal Wally dry hop rate with those fancy hops that we mentioned earlier. Aroma is just a ton of fruit punch, apricot, white grape juice, mandarin. 10% abv. Drinks smooth… like scary smooth. And it’s hoppy, very hoppy. It’s Wally, what a treat. $22 per 4-pack. 200 cases. 2x 4-packs per person. . We’ve got one more new release to go with this one… we’ll announce tomorrow morning. Stay tuned!

NEW CAN RELEASE TODAY: Welcome in Dutchman's Dream Pale Ale and Dutchman's Dream Wulfenite Raspberry Pale Ale! Dutchman's Dream Pale Ale is a hop-forward American pale ale infused with mid-temperature hop tea using Mosaic and Loral hops – 5.1% ABV / 30 IBU Dutchman's Dream Wulfenite Raspberry Pale Ale is a bright, deep raspberry flavored American pale ale made with Cascade, Citra & Mosaic hops, perfect for poolside drinking – 5.2% ABV / 27 IBU "I have had a recurring dream each and every night during this past fortnight in the Arizona Territory. I dream of my Uncle Jacob aglow in a mine deep in the Superstition Mountains, pick in hand, as he finds a glorious vein of gold. Some nights it isn't gold in the dream, but a newly discovered glassy, red gem in southern Arizona locals call wulfenite. Miners here are speculating on the value of these stones. It must be front of mind as I am unable to find my uncle or his mine. I can only hope these dreams are a good omen for what adventure is to come." ~ HVB .⁣ ⁣ #canrelease #beer #craftbeer #beerporn #instabeer #beerstagram #beergeek #beerme #beerlover #craftbeerporn #arizonacraftbeercommunity #beertography #beernerd #beersnob #beertime #craftbeerlife #ilovebeer #craftbeernotcrapbeer #craftbeerlover #beergasm #beerlovers #beersofinstagram #arizonacraftbrewersguild #beerus #drinklocalaz #beerlove #beeradvocate #beerlife #beeroftheday #fountainhills

It’s pool weather here in AZ! Don’t forget to stock up on some of your favorites to enjoy while you relax and get some sun. Hours are as follows: Sunday-Thursday 2pm-7pm Friday+Saturday 2pm-8pm Order online at toasttab.com/12westbrewing, or stop in and order through the window on our patio.

DROPPING TOMORROW! A Sister Stout of our classic Superstition Coffee Stout for those who prefer a lighter roast in their daily cup of joe. White Canyon Blonde Stout returns (& wow is this batch incredible)! Brewed with a simple blend of AZ grown & malted barley @sinaguamalt and rolled oats with the additions of Sunrise & Veneto light-roast coffee blends from @superstitioncoffee, copious amounts of locally roasted Nicaraguan cacao nibs from @zakschocolate, and a sprinkle of star anise. It may not look it, but this easy-drinkin' Summer Stout is sure to surprise you with it's burst of flavors of chocolate, caramel, and coffee! White Canyon 4-packs will be releasing tomorrow afternoon fresh off our canning line at our Gilbert Brewpub (with a fresh batch of Refuge IPA 4-packs, too!) and available @azwildernessdtphx on Thursday! Order online at azwbeershop.com for Gilbert pick-up or valley-wide delivery. #azwbeer #blondestout #whitecanyonwilderness

Spawn of Earp double IPA. RARE: only brewed once per year

Ready to spice up your life? This weekend, together with our friend John at Chili’s Paradise Valley, we have this hazy, juicy, topical IPA – the delicate hint of spice is brought to you by a quarter pound per barrel of habenero chili peppers. #spicybeer #collab #tombstonebeer

Happy Tuesday! Why not tap Heffy Moto?! This 4.7% Hefeweizen was brewed with 4lbs of orange zest and 2 gallons of fresh squeezed juice courtesy of our friend Hoppymoto Biiru-san from AZBreweryTours. Come On in and Social Distance with your favorite pooch. Open at noon for a safe dine in experience or to go food, spirits, and BEER! #ohsobrewery #chooseazbrews #arcadia #restaurants #ohso

Tequila Jack, our barrel aged cream ale is back on tap — get it while we got it. Cheers! #historicgrandave #craftbeer

FRONT POURCH BREWING (Phoenix) *I missed this one last week*

There has got to be more to life

Our Head Brewer has finished up our latest batch of Shakin’ Citrus IPA and put it on tap yesterday. Bittered with Cascade and finished with Citra and Lactose this beer is mildly hoppy and creamy smooth as well as fragrant. We dry hopped with Citra and Comet. Cheers 🍻 #peoriaartisanbrewery #drinklocalaz #chooseazbrews #ipa #hazyipa #brewery #beer #craftbeer #independentbeer

Matthew Johnson is Director of Digital Content for PHOENIX. He writes about craft beer, sports and media.

If he missed something or if you have a question about craft beer in Arizona, please send him an email at matthew.johnson@citieswestmedia.com