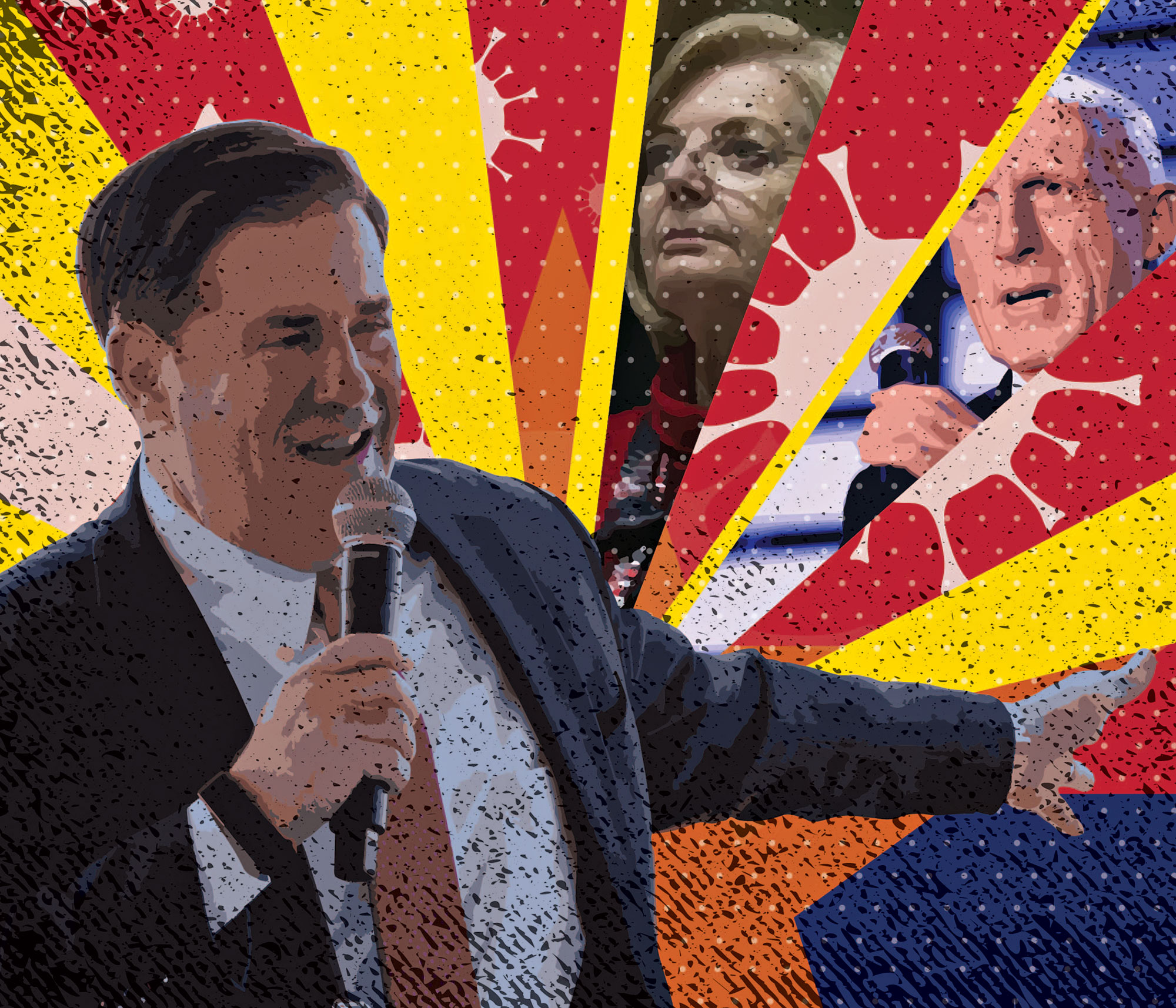 The coronavirus pushed Arizona’s 2020 legislative session to the side – but not away from our assessing eyes.

Talk about the best and the worst of times: Arizona’s 2020 legislative session kicked off with Governor Doug Ducey crowing about the state’s “roaring” economy in his annual State of the State address on January 13, the Legislature’s opening day. It ended prematurely on March 23, under the specter of COVID-19, the respiratory illness that has wreaked illness and death worldwide.

Instead of bold plans and tax breaks, the Legislature instead passed a scaled-back “skinny” budget to meet baseline needs and adjourned, promising to return in mid-April to address the many bills left hanging.

Jim Small, editor in chief of the Arizona Mirror, which covers the Legislature in-depth, says the pall of uncertainty hanging over the Capitol is reflected in the authority that legislators gave state House Speaker Russell “Rusty” Bowers and Senate President Karen Fann to delay the April 13 return date indefinitely, if need be.

“That’s very abnormal,” he says. “But probably really necessary… You don’t want to force lawmakers to come back down to the Capitol in a dangerous situation, just so they can say, ‘OK, we’re going to delay ourselves for another three weeks,’ or a month or whatever.”

Pressure had been building for the Legislature to recess early as the COVID-19 crisis escalated through March. Ducey declared a state of emergency early in the month, following it up with orders closing public schools and some businesses. A statewide stay-in-place order was enacted as this article went to print.

Small credits state senators for being the adults in the room, with Fann, a Republican, brokering a last-minute deal with the Democrats on the $11.8 billion budget, with $50 million appropriated for those hardest hit by COVID-19.

As we survey the good, the bad and the ugly from the suspended session, chalk up that appropriation as a modest win for the side of the angels.

SB 1690:  Emergency Appropriation for the Virus Crisis
Creates a “crisis contingency and safety net fund” of $50 million that is administered by the governor’s office during a state of emergency. Monies are to be spent on housing assistance, groups that help the homeless, food banks and small businesses and nonprofits. Small calls the move “a good first step,” but obviously the state will have to do more.
Status: Signed by the governor.

HB 2910: Assisting Schools on Closures and COVID-19
Introduced by Rep. Michelle Udall, a Mesa Republican and math teacher, the bill addresses the closure of all public schools by Ducey and Superintendent of Public Instruction Kathy Hoffman on March 15 to help halt the spread of the novel coronavirus. Schools can skip mandated testing and keep paying teachers and other employees. Students finish their courses at home without having to make up the time later. Ducey said the legislation was needed “to provide clarity” to schools and parents.
Status: Signed by the governor.

SB 1694: Expansion of Unemployment Benefits
Expands access to unemployment benefits to workers adversely affected by the pandemic. Normally, someone can only claim benefits if they lose their job, but the bill allows workers temporarily laid off due to business closures to receive unemployment. Persons ordered to quarantine themselves or who have to remain home to nurse family members also are allowed to apply.
Status: Signed by the governor.

SB 1160: Fix to Firefighters’ Cancer Claims
An example of a good bill left in limbo by the Legislature’s early adjournment. It aims to fix a lingering problem for the state’s firefighters, many of whom suffer from cancers caused by prolonged exposure to hazardous materials while battling fires. Insurance companies have required firefighters to prove their cancers are work-related. This legislation would write a presumption to that effect into law. It enjoys broad bipartisan support.
Status: Passed the Senate, awaits action in the House.

HB 2114: “Brady List” Appeals by Law Enforcement
Would create an appeals process for law enforcement officers whose names have been referred to a county attorney for placement on the “Brady List,” a database of dishonest cops whose misdeeds must be disclosed to the defense in a criminal case as a result of the 1963 U.S. Supreme Court decision, Brady v. Maryland.

Police unions back the bill, claiming they suffer from a raw deal under the current system. But defense lawyer Armando Nava, speaking on behalf of the Arizona Attorneys for Criminal Justice, reminded the state House Public Safety Committee in February that the “appeals” process would prove unconstitutional and “jeopardize the entire trial process as we know it.”
Status: Passed the House, awaits action in the Senate.

HCR 2041: Appointing, Not Electing, CorpCom
Seeks to refer a proposition to voters asking them to amend the state constitution and strip themselves of the power to elect the five members of the powerful Arizona Corporation Commission, which regulates all utilities in the state. Instead, the House resolution would have the governor appoint the commissioners with the consent of the state Senate. The reaction to the proposal has been loud and fiercely negative. A Senate version, SCR 1048, failed in committee. The House version awaits a floor vote.
Status: Received do-pass recommendations from two committees, retained on House calendar.

HB 2706: Ban on Transgender Students in Sports
This ideological attack on one of the nation’s smallest minorities, transgender student athletes, would restrict all interscholastic and intramural teams for state schools and colleges to three categories based on “biological sex”: boys/men, girls/women and co-ed. The bill allows anyone to “dispute” the sex of any athlete, forcing athletes to prove their sex by “presenting a signed physician’s statement” with “an analysis of the student’s genetic makeup.”

No wonder Democratic State Rep. Daniel Hernandez, co-founder of the Legislature’s first LGBT caucus, referred to this creepy, right-wing legislation as the “show me your genitals” bill.

JP Martin, political director for the LGBTQ rights group Equality Arizona, says the bill is one of many like it that are being pushed in state legislatures across the country by conservative organizations, such as the local Center for Arizona Policy. He says the legislation is very much alive, despite the current lawmaking hiatus. The bill’s backers couch it as protecting girls’ sports, but Martin says that’s a nonexistent threat.

“They’re denying trans girls’ existence,” he says. “The same groups failed to marginalize them in the locker room and the restrooms. Now they’re going for sports.”
Status: Passed the House, awaits action in the Senate.

SCR 1007/HCR 2036: Sanctuary Cities Ban
These mirror resolutions, introduced at the behest of Ducey, sought voter approval for a constitutional amendment banning any city from becoming a so-called “sanctuary city,” a term used to describe municipalities that refuse to cooperate with federal immigration officials. The problem? There are no “sanctuary cities” in Arizona, and there cannot be, due to SB 1070, the controversial 2010 immigration law.

Though much of SB 1070 was struck down by the U.S. Supreme Court in 2012, one part that survived forbids state and local officials from taking any action to limit “the enforcement of federal immigration laws to less than the full extent permitted by federal law.” Thus, sanctuary cities are a no-go in Arizona. Even lefty Tucson voters overwhelmingly rejected a 2019 proposal that attempted to defy 1070 and make the Old Pueblo a sanctuary city.

Ducey’s bid to enshrine SB 1070’s ban on sanctuary cities in the state constitution was supported by Republican lawmakers, but it quickly brought down the wrath of the business community and Latino groups. Less than a month after proposing it, the governor caved, withdrawing all support for the legislation. Though both resolutions seem deader than Jussie Smollett’s acting career, no bill is truly extinguished until the legislative session officially concludes.
Status: Held in committee.