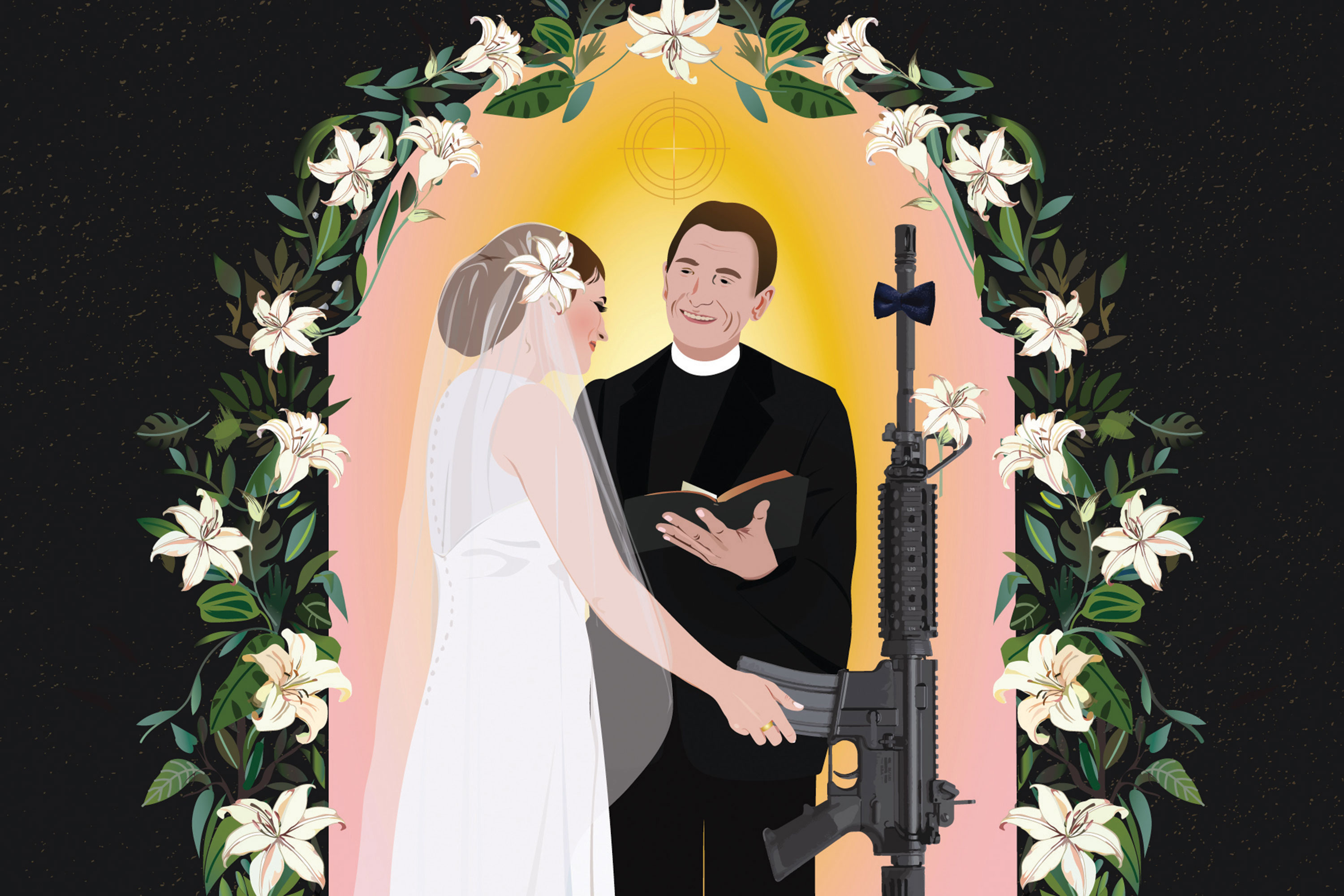 Earlier this year, a press release landed in my email inbox, advertising gun-themed weddings at a shooting range in Scottsdale – complete with target practice for the bridal party and bouquets of flowers sprinkled with shotgun shells.

Really, who wouldn’t want to celebrate finding true love by firing a machine gun or posing in a wedding dress with a 12-gauge shotgun?

“We have tons of ladies coming here to do bachelorette parties,” the owner told me. Event packages have names like “Get Some” and “Say Hello to My Little Friend,” and you can take unlimited photos and videos of your super fun gun time.

Call me a killjoy. With every mass shooting, I find myself less and less entertained by our culture’s continued celebration of gun culture.

In January 2011, driving around Tucson just after Congresswoman Gabby Giffords was shot in the head at point-blank range, I stopped short when I saw a billboard advertising a gun show. In my naiveté I thought the world would take a break for a few days, at least, after the massacre (12 were injured by gunfire, six were killed). Of course, it was just the opposite. Gun sales typically soar in time with gun deaths. You want to own a gun? Fine. As long as you follow the rules, that’s still your right. But quit waving it in my face.

After Sandy Hook, I couldn’t take it anymore. In January 2013, I started an Instagram account, @2013gunshow, where I documented the gun as an icon – in the hands of the Morton Salt girl, on Joe Arpaio’s tie clip, bumper-stickered to the backs of so many cars on the streets of Phoenix that I lost count. I didn’t make it a full year – by July, I’d had my mental fill of gun-shaped earrings, cookie cutters and cigarette lighters.

I stopped looking for guns and, for a while, it felt like society was growing more sensitive as the death toll rose. Then this press release arrived and I realized that I just hadn’t been paying attention. Some people still celebrate guns – maybe more than ever.

I’m not going to name the shooting range with the “shotgun wedding” packages, or the facility’s owner, who was kind enough to talk to me. He is obviously a good businessman – he recently opened a second location in town – and spoke quite a bit about gun safety and the training classes that he fills easily. So I won’t shame the guy. But, troublingly, he confirms that sales surge after each mass shooting, as people worry that their gun rights will be curbed. His answers feel straight from the National Rifle Association’s playbook, like this one: “If you find out that they’re no longer going to allow the sale of vodka in the United States, you’re going to go out and buy as much vodka as you can.” And this classic: “It’s unfortunate that people do bad things, but it’s the people, you know what I mean?”

As for the weddings and the bachelor/bachelorette parties, he says, “I think there’s different strokes for different folks. Some people want to get married in a hot air balloon.”

According to the Giffords Law Center to Prevent Gun Violence, started by Giffords and her husband, Mark Kelly, after she was shot, 36,000 people are killed each year with guns, and each year 100,000 are shot and injured. The mass shootings keep coming – but that’s not where we see the bulk of casualties. They’re everywhere, from suicide to domestic violence to unsolved crimes like the one that changed Jennifer Longdon’s life forever.

Fifteen years ago last November, Longdon, a Phoenix resident, had just returned home from a scuba diving vacation with her new fiancé, who’d proposed on the trip. The two were grabbing fast food at a drive-thru in Phoenix one evening when someone sprayed gunfire at their truck. Both lived. Longdon’s fiancé sustained brain damage and requires around-the-clock care. She was paralyzed from the chest down. They were collectively shot five times. The case remains unsolved.

Like Giffords, Longdon has owned guns. Several years ago, for a story, I accompanied her to a shooting range and watched her fire a gun for the first time since she’d been shot. Her hand shook and tears ran down her cheeks as she pulled the trigger. We haven’t spoken of it since. Today, Longdon serves in the Arizona Legislature and is an advocate for gun reform. Her wedding to the man with whom she once scuba dived and practiced martial arts never happened. If she does marry some day, she won’t walk down an aisle.

Something tells me Longdon – who’s one of the funniest people I know – wouldn’t have much of a sense of humor about the concept of a “shotgun wedding” complete with a chance to try out an AK-47 before tossing the garter and cutting the cake. None of us should.