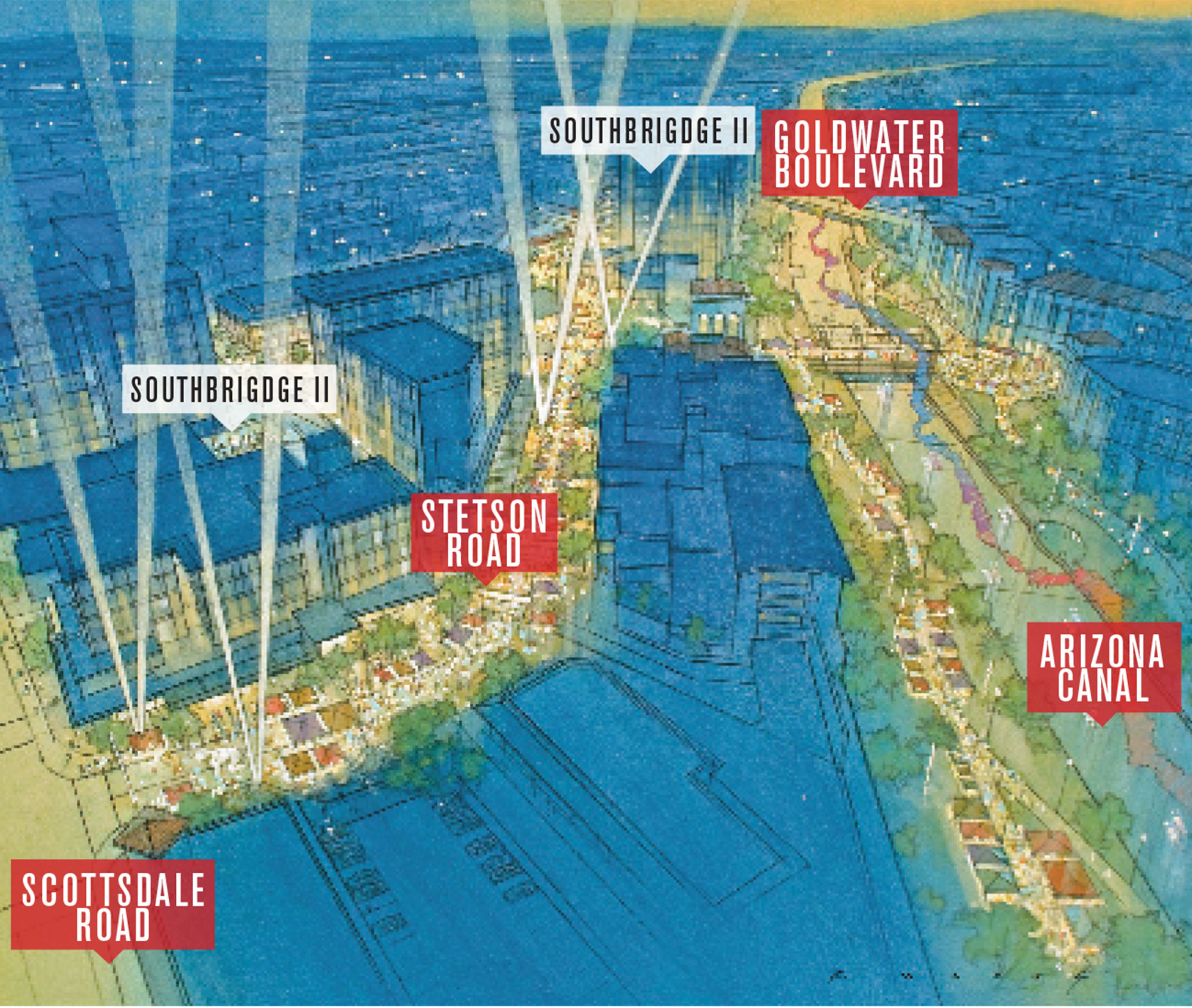 The classic fight in Scottsdale between development and preservation continues, with the bout’s location simply moving from the desert mountains to Old Town. The title prize is a proposed mixed-use development, Southbridge II. The contenders? In one corner: Scottsdale Mayor Jim Lane, three City Council members and Carter Unger of Spring Creek Development. They face off against two Council members, Janet Wilson of the Committee for the Preservation of Old Town Scottsdale and more than 17,000 people who signed a petition to let Scottsdale voters weigh in on the decision on the November ballot.

Last December, the Scottsdale City Council voted 4-2 to approve Southbridge II near Goldwater Boulevard and Fifth Avenue along the canal. The project calls for updating aged, one-story buildings with a 9.94-acre development including more than 1 million square feet of four- to 16-story condos, retail and office space and a hotel. Proponents envision Scotts-dale’s version of the San Antonio Riverwalk, plus a better connection between upgraded Fifth Avenue shops to the original Southbridge project (south side of the canal) and the Scottsdale Waterfront (north side).

Wilson and her brother, Dennis Floyd, own Floyd Investments, a business their parents started. Wilson’s stake in the area goes back 30 years: She served as president of the Fifth Avenue Property Owners Association and helped start the Downtown Scottsdale Partnership. “I own three buildings that would be directly affected by Southbridge II,” she says. “We are not against redevelopment, but this development is way too extreme.” Of specific concern to Wilson: construction disrupting tenant-merchants’ businesses and displacing others, adding more cars to an area where parking is already lacking and allowing building heights up to 140 feet that would “ruin our views, our Old Town charm.”

Unger’s family also has a deep stake in Scottsdale history. Carter is the son of the late Fred Unger, who led Spring Creek and the original Southbridge development project 13 years ago. Tenants in favor of Southbridge II, such as Keith Zollman of Studio KZ architecture and design on Sixth Avenue, applaud Carter Unger for a transparent outreach campaign and his family’s established history with Scottsdale. Zollman says Unger intends to provide more parking than the minimum required by the city and Studio KZ likely will lease in the new development.

“Southbridge II will bring a new vitality to Old Town,” Lane says. “Market changes and most all of the business and property owners in Old Town recognize the enhancement to Scottsdale’s once-sophisticated western version of New York City’s Fifth Avenue is needed and accomplished by Carter Unger’s project development plan.”

At press time, Wilson said that Unger was challenging the referendum in court. Is the bout postponed? “Stay tuned,” she says.