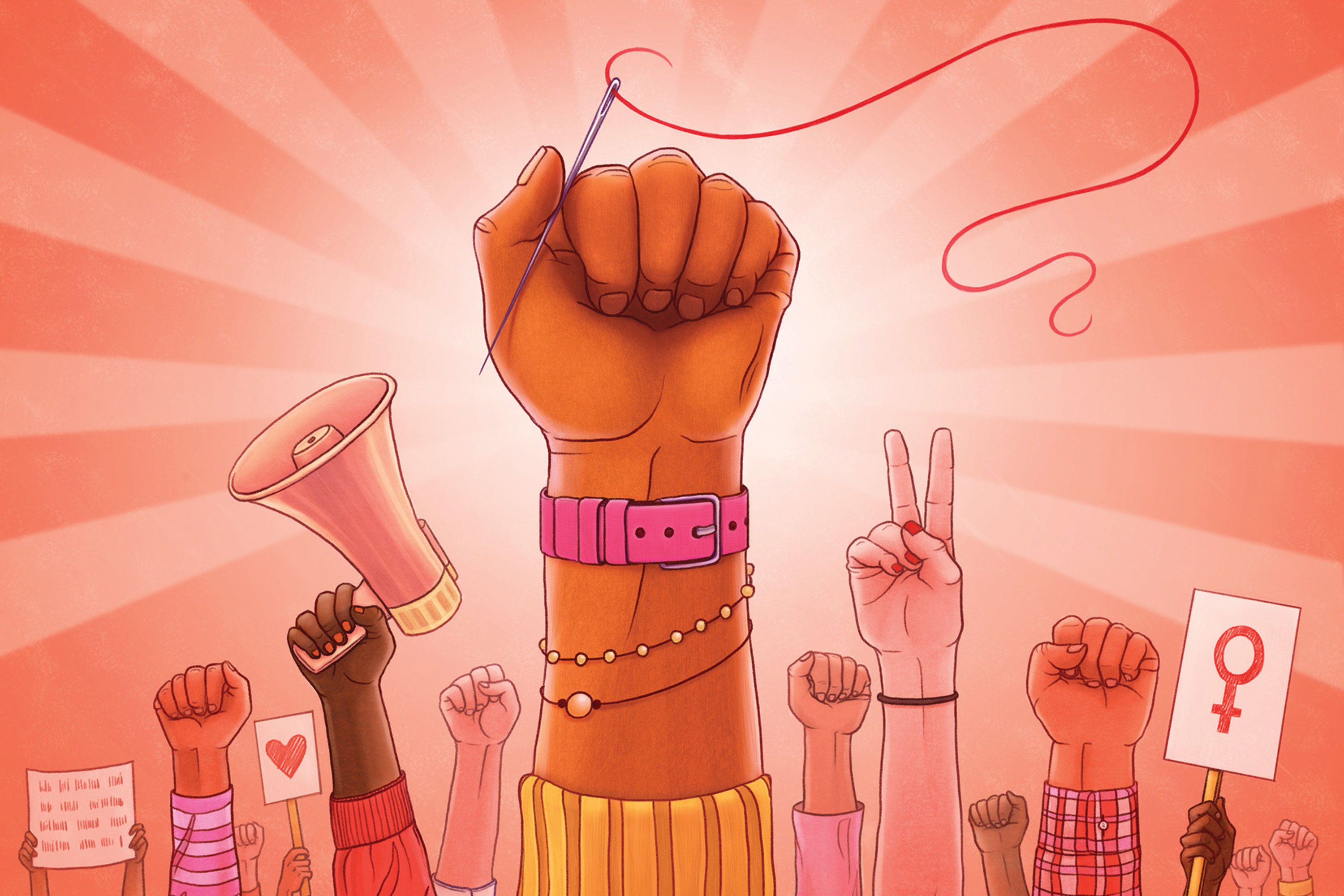 She just wanted a hobby. Instead, she found her voice – one valentine and jump-stitch at a time.

A few years ago, I decided I needed a hobby. This was more of a challenge than you might think. Anything musical was completely out of the question, and I can’t draw, paint or sculpt. I was terrified of the tiny, lightless room where everyone else in the analog photography class had no problem loading their film into the canister for processing. Once, just after college, I marched myself into a knitting store in Washington, D.C., and managed to spend hundreds of dollars on materials to make a Fair Isle sweater – only to abandon the bag of needles, instructions and yarn under the desk of my first job.

You get the picture.

But embroidery seemed manageable. All you needed was a hoop, needle, thread and a trip to one of my favorite spots in Phoenix, SAS Fabrics. I stocked up on cheap white muslin and learned a simple stitch, quickly abandoning patterns once I realized my final product would never look as good as anyone else’s. I needed something original, so I began to embroider my kids’ drawings, tracing over them with a red pencil and transferring the simple shapes onto the muslin with the heat of a steam iron. There’s something so satisfying about poking the needle into the fabric and creating a pattern. Eventually I settled into a habit of embroidering just once a year – creating a valentine of my girls’ “sister love” to send to family and friends. In between, my embroidery bag got dusty.

Then embroidery got political. I’m totally in the bag for this. That first job I mentioned was for a U.S. senator, and though I soon ran screaming from government work – straight into the arms of journalism – the idea of there being an intersection between art and letters to make a statement feels right. The first political stitching I saw was on Instagram, where I find a lot of embroidery inspiration. In fact, it was about journalism: A copy editor at the Dallas Morning News was stitching lines from the paper’s comments section and posting them at @sewmanycomments.

Fast forward to the Tiny Pricks Project. Yes, you read that right, and yes, it’s a not-so-subtle political double entendre. In 2018, a woman named Diana Weimar stitched the words “I am a very stable genius” onto a piece of old fabric. That was so satisfying that she decided to invite people to embroider presidential quotes onto vintage linens – and the results have been incredible. She’s had group shows in many places, including New York City, and you can see new examples all the time at @tinypricksproject. It’s the best kind of political statement – organic, creative, subversive, sarcastic.

I had to try this at home, so with the help of Changing Hands Bookstore, we began Stitch-In, an occasional gathering of needleworkers of all skill levels, including none. (You can learn about upcoming Stitch-In events at changinghands.com.) We don’t limit the content to Donald Trump quotes – in fact, I kind of hate to give the guy that much energy, so I embroider other things. One recent Sunday, my friend Deborah simply stitched “HELP” onto a vintage hankie. Another friend, Cynthia, found a gorgeous old tapestry in a pile of her grandmother’s things – a tourist-y homage to Florida – and she’s stitching Trump quotes all over it. It’s fabulous.

As it turns out, using embroidery to make political statements is nothing new. Maureen Goggin is a professor of rhetoric in the English department at Arizona State University, and she’s studied and taught the history of stitching. One of the most famous examples, she tells me, dates back to Mary, Queen of Scots, who in the 16th century embroidered battle plans in code from her jail cell.

Stitching evolved in the 18th century, Goggin says, when girls would stitch bible verses or moral statements. “It became a space in which to teach girls not just stitching but to teach them moral lessons and obedience. And if you think about just the whole act of stitching – with your head down and concentrating – there’s a way to keep them busy so they couldn’t get into trouble.”

We haven’t come so far, Goggin says. But we have figured out how to use stitching to make trouble in the best ways. “I think women’s voices are not heard. We’re still struggling and we’re fighting every day, and we seem to be losing the battle right now,” she says. “Tiny Pricks is a beautiful example of people who are frustrated with politics. Doing the weird sentences from Trump is perfect.”

As the 2020 political season heats up, the needles will only move faster, I suspect.