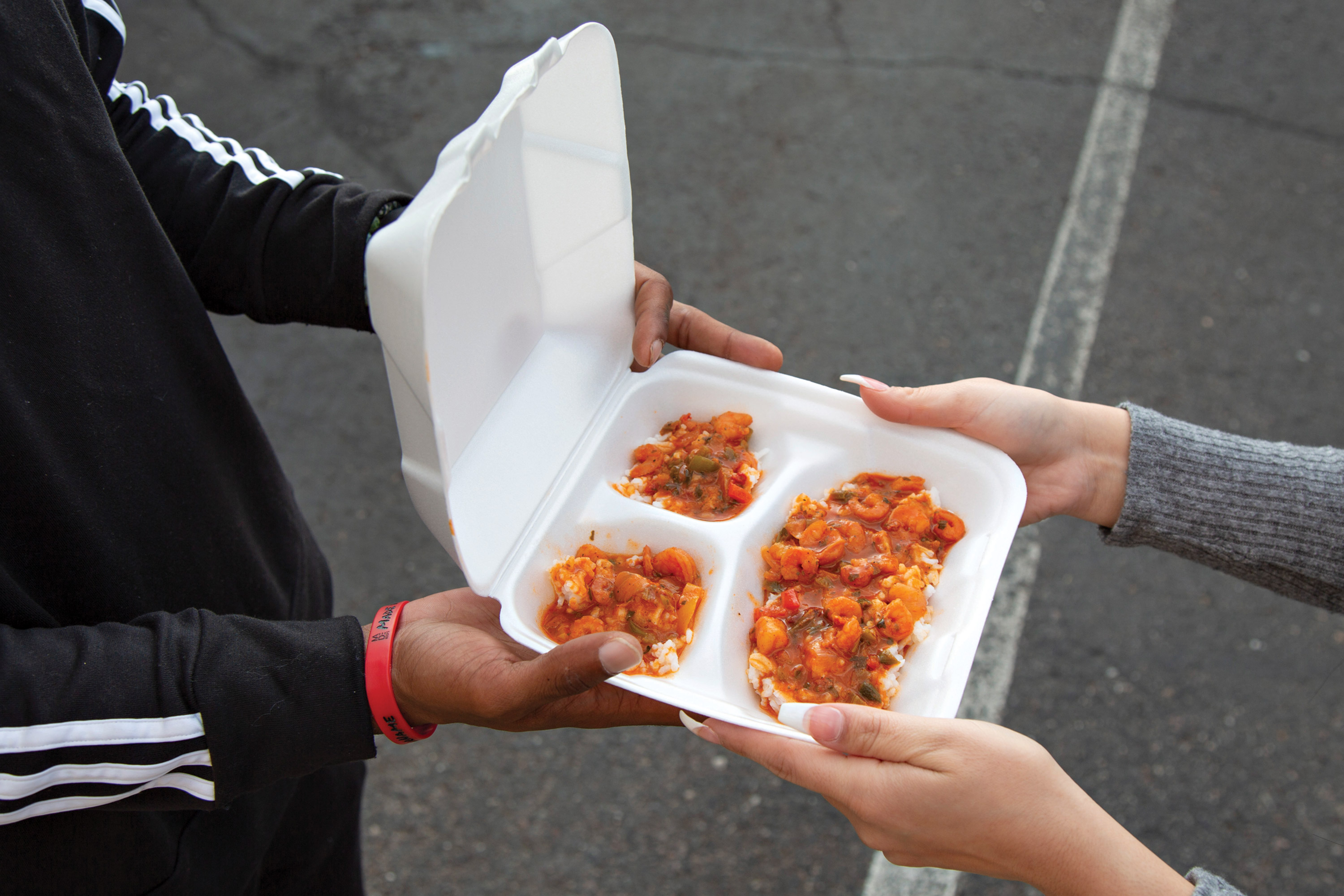 Dwayne Williams serves a covert dish of shrimp and rice to a Mel’s Southern Kitchen customer.; Photography by Angelina Aragon

No restaurant, no problem for these guerrilla chefs.

Dwayne Williams didn’t plan on becoming a chef when he left his native New Orleans for the Valley in 2012.

“I grew up, born and raised in New Orleans. Came here for college, actually. Phoenix College, then ASU,” Williams says. “The plan was actually to play sports – I came here for football.”

But, as is often the case, things didn’t go according to plan. Williams only saw a little preseason action as a receiver and cornerback for the Phoenix College Bears. He did, however, get a bachelor’s degree in broadcasting from Arizona State University. And he started a business, too: Mel’s Southern Kitchen, pickup and delivery Creole and Cajun cuisine. (Mel, you see, is Williams’ 2-year-old daughter.)

“I’ve been cooking all my life,” Williams says. “But I think I took it more serious as a profession maybe about a year and a half ago.”

But Mel’s Southern Kitchen doesn’t often go according to plan, either. Go to the website (mels-southern-kitchen.square.site), and you can gaze at, and drool over, the pictures on Mel’s online menu all you like – the seafood boil ($12), thin-cut steaks with Cajun pasta and jambalaya ($24), even some fusion-y items like supreme Creole nachos ($11). You can even marvel at the bargain price of the blackened fish (was $15.70; now $15.13). That doesn’t mean that any of these tempting dishes will be readily available when you call and ask for them.

If you call him, Williams may apologetically tell you that he doesn’t have what you just asked for at the moment. Ask for something else on the menu? Same story. If you then ask him what he does have, he may tell you something like: buttered rice with shrimp. Fine.

You may also notice that there’s no address on his website. He may offer to meet you in the vicinity of 32nd Street and McDowell Road and bring you your lunch. Or he may give you his street address, and when you arrive, you’ll find an ordinary little house on a quiet street.

After a little while, he’ll come out to your car, accept your payment – cash or debit – and present you with a Styrofoam box full of the most delicious rice and shrimp you’ve ever tasted, alongside a pile of thin-cut steaks (or whatever he’s cooking that day). Mel’s Southern Kitchen, it turns out, is just that: a kitchen, in an ordinary house. But what comes out of that kitchen is not ordinary.

In one sense, transactions like this are nothing new. People have been selling food out of their kitchens and yards for centuries; the restaurant proper is simply an extension of this basic form of human hospitality and commerce. But a current breed of chefs has circumnavigated the traditional route of working their way up through the ranks of the restaurant hierarchy. Marketed, like seemingly everything else these days, via social media, they bypass inconveniences like landlords and waitstaffs, and make and deliver the food themselves.

On any given Sunday – say, the drizzly, chilly December Sunday of an Arizona Cardinals-Pittsburgh Steelers game – you might find Tony Mercado in the chaotic tent city on the “Great Lawn” in front of State Farm Stadium. He’s offering Tony’s Hood Tacos. Technically he’s not selling them, just handing them out, though a tip jar yawns.

“I’m just trying to get the word out,” he says.

Then he makes a taco, by a less-than-traditional method: He puts oil on a griddle, then piles it with finely shredded cheese, then presses down with a corn tortilla to flatten and fry the cheese before piling it with tender, moist birria.

“I’m trying to revolutionize the taco,” he says.

On any other Sunday, you might find Mercado doing the same revolutionary work in his own backyard on West Camelback Road, for a devoted clientele of friends and Instagram followers. During the week, he does windshield replacement. Sundays, not Tuesdays, are taco days for Mercado.

Mercado and Williams could be considered guerrilla members of a trend sometimes referred to as “cottage food” – quite simply, food made in the kitchen of a private residence – which in turn is part of a long-growing trend in this country toward eating local. According to former U.S. Secretary of Agriculture Tom Vilsack, U.S. local food sales were expected to hit $20 billion this past year, up from $12 billion in 2014 and $5 billion in 2008.

It’s doubtful, however, that these two guys figure in that data. What they offer doesn’t fall under the heading of what most states (including Arizona) allow as “cottage food.” This includes, according to the Arizona Department of Health Services, baked goods like cookies, brownies and bread, as well as certain jams and jellies, but no food requiring refrigeration. Some caterers have also embraced this off-the-grid mentality with the “pop-up dinner” concept, as with Ivan Jacobo’s 319 Hidden Kitchen here in Phoenix.

But Williams or Mercado are even farther below the radar. Their businesses could be in a legal gray area, even though both have food handler’s licenses. Mercado worked at a Church’s Chicken and had his own Sonoran-style hot dog stand for a time. Williams, having been taught Creole cooking by his grandmother, also honed his skills working at a few Valley restaurants, including Cornish Pasty Co. and Los Taquitos at Phoenix Sky Harbor International Airport.

Mercado adopted the role of backyard chef when people came to his house to watch fights or football.

“I love being a host,” he says. “I love cooking. If I see somebody cooking, I push them aside and say ‘I’ll handle it.’”

Eventually his backyard parties, publicized by his friends on social media, got so popular that he and his wife decided to start collecting money at them.

From a consumer’s point of view, the excellence of the food is the key to a borderline surreptitious business like this. Most of the advantages go the chef’s way: They’re open when they want, not when you want. They cook what they want, menu be damned, and it takes however long it takes. If their food isn’t simply the bomb – as it is, in both of these cases – few customers would put up with it.

Even so, both Mercado and Williams dream of going legit. Mercado hopes to make the leap to full-time taquero, and Williams, too, hopes to take his business out of his own kitchen. “A food truck was one of the ideas we’re leaning toward, as opposed to a restaurant, as far as right now… I want to do a lot of festivals, so people can get familiar with my face and the overall brand,” Williams says. There is some precedent for this sort of crossover success, as with Jacobo’s elegant Anhelo Restaurant in Downtown Phoenix.

At the moment, Williams admits that much more demand could be daunting.

“It can be overwhelming sometimes. Everything is just me, by myself,” he says. “If this really does take off, I would look into an employee or two. But I’m content being where it is now, where I can control it.”

Despite his own career ambitions, Mercado seems largely motivated just by the pleasure of feeding people.