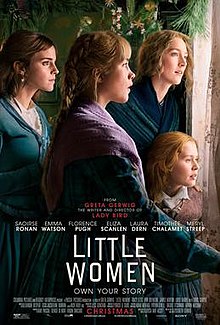 Little Women—There have been multiple screen adaptations of Louisa May Alcott’s beloved novel, and all of them have their merits. Katherine Hepburn seemed born to play heroine Jo March in George Cukor’s 1933 film, and Elizabeth Taylor seemed born to play Amy in Mervyn LeRoy’s 1949 rendering. For my money, the best, most balanced and beautiful version yet was Gillian Armstrong’s, from 1994, with Winona Ryder’s best performance ever as Jo, and a luminous Claire Danes as Beth.

My opinion on this is not altered by this new recounting of the fortunes of the four progressive March sisters in Civil-War-era Massachusetts, directed by Greta Gerwig of Lady Bird. Gerwig has plenty of talent, the acting is terrific, and there are many enjoyable episodes, but I can’t join in the considerable acclaim it’s received; the story is weakened by its muddled structure.

Gerwig, who also scripted, seems to be trying for a contemporary, almost anachronistic flavor at times, as when Jo (Saorise Ronan) and Laurie (Timothee Chalamet) do a silly, spazzy dance on the sly at a party that might have come out of a John Hughes movie. Similarly, the interactions between Jo and a publisher (Tracy Letts) border, almost, on the “meta.” This stuff comes across self-consciously, but it has a certain charm.

What hurts this Little Women much more is a scrambled, non-linear approach that is advantageous to the drama in no way that I can see. As we jump forward and back in time, it isn’t always immediately clear where we are in the narrative. A person unfamiliar with the tale might be even more disoriented; this might not be the best version to introduce a kid to the story.

But this structure doesn’t just hurt the film’s clarity; it also hurts its pace. Just as the movie seems to be pressing toward the resolution of a crisis, we suddenly jump to a flashback, and it feels, rather, like a drag on the story’s progress.

All this said, Ronan makes a spirited Jo, Laura Dern is outstanding as the girls’ mother “Marmee” and Meryl Streep doesn’t have to lift a finger to shine as crabby Aunt March. Best of all, perhaps, is Florence Pugh as Amy; she brings out the character’s unsentimental directness and candor, and even her startling mean streak, without losing her likability.