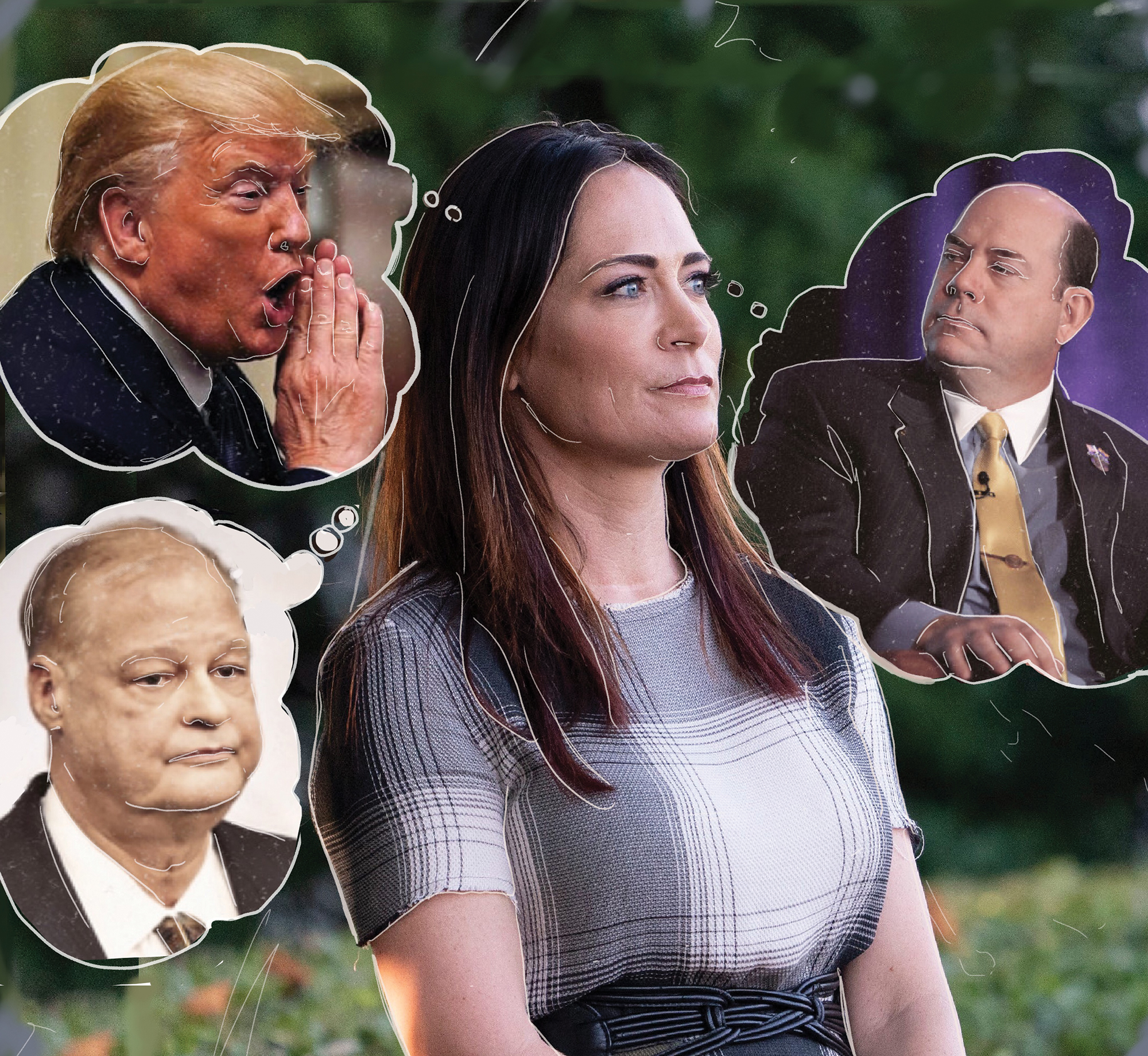 How did longtime Arizona political mouthpiece Stephanie Grisham land one of the most high-profile jobs in the Trump administration? By not following the rules.

During a recent appearance on Fox Business Network, White House press secretary Stephanie Grisham looked ready to channel Godzilla and mow down all comers by blasting an atomic death beam from her kisser.

Host Trish Regan had asked Grisham, 43, about comments made by Senator Mitt Romney of Utah, who called President Donald Trump’s actions in the impeachment scandal “appalling.”

Grisham did advance work on Romney’s failed 2012 presidential run. How did the Romney she served compare to the one badmouthing Trump? “Just one word comes to mind, and it’s ‘pathetic,’” Grisham spat, adding, “It’s hard for me to actually hear the word ‘Republican’ and ‘Mitt Romney’ in the same sentence.”

Grisham’s willingness to go sea monster on Mitt won’t surprise many who knew her in Arizona, where she honed her PR skills flacking for controversy-pocked local pols like former Arizona Attorney General Tom Horne and ex-state House Speaker David Gowan. So far, she seems tailor-made for the Trump White House. But will the fit keep once Trump shifts into campaign mode during primary season?

TV clapbacks aside, she’s been surprisingly low-profile. Her predecessor in the White House, Sarah Huckabee Sanders, regularly waded into widely broadcast battles against journalists. But since Trump appointed Grisham in late June, she has yet to hold a news conference, opting instead to lambaste Trump’s naysayers via pro-POTUS outlets. Tellingly, Grisham hasn’t yet spawned her own Saturday Night Live doppelgänger, like the one created by Phoenix native Aidy Bryant to mock Sanders. Grisham’s approach seems as counterintuitive as her own unlikely rise to prominence – an ascension made possible by the most unconventional presidency in modern American history.

Unlike Sanders – who was baptized into Republican politics at an early age by her pappy, ex-Arkansas governor Mike Huckabee – Grisham lacks an establishment pedigree. Nor can Grisham boast the CV of Sanders’ forerunner, Sean Spicer, who worked in George W. Bush’s administration and as the Republican National Committee’s communications director.

Much of Grisham’s bio remains murky, and she declined comment when contacted by PHOENIX. For an August profile in The Washington Post, she confided being born the second of three children to a family of farmers in Colorado. Otherwise, she’s remained cagey. She once tweeted that she attended high school in East Wenatchee, Washington. She has two ex-husbands: Tucson KOLD-TV anchor Dan Marries, and former KOLD-TV sportscaster Todd Grisham. She bore a son by each.

Scolds have dinged Grisham for being twice arrested for drunk driving – in 2013 and 2015. Politico waded through the  details as supposed proof of Grisham’s “sordid” past, snarking she’d had “more drunk driving arrests than WH press briefings.”

Regarding her pre-political résumé, The New York Times reported that AAA Arizona canned Grisham from a PR job in the early aughts, allegedly for filing false expense reports. The same story claimed Grisham was fired for plagiarism at the ad company Mindspace. She flacked for the Arizona Charter Schools Association for a couple of years without incident.

But it’s her time with Horne and Gowan that seems to have presaged her future with Trump. Grisham started working for the ex-state AG in 2013. Horne was accused of illegally using staff to campaign for reelection on state time. Investigations by two state agencies found the allegations valid. Grisham was one of several employees who allegedly did campaign work on the clock.

“She’s a brass-knuckles brawler. Her shoving aside of the North Korean security guards is totally in line with who she is.”

Ultimately, Horne’s bid for reelection was torpedoed in the 2014 GOP primary by current Arizona AG Mark Brnovich. Grisham soon scored a gig as spokeswoman for the Republican majority in the state House, reporting to House Speaker David Gowan. According to Jim Small, then-editor of the Arizona Capitol Times, Grisham was “really approachable, really responsive, really helpful.” The paper even named her “Best PR Person” of 2015. This amiable relationship soured after Cap Times reporter Hank Stephenson exposed Gowan’s improper use of state fleet vehicles. Grisham retaliated, attempting to bar the publication from Governor Doug Ducey’s 2016 State of the State address. Now editor of the Arizona Mirror, Small recalled how he jumped on the horn to Grisham.

“I was met with, ‘Nope, we’re out of room. We can’t let you in there,’” Small says. Threatened with a lawsuit, the speaker relented. But the reprisals continued. Grisham began a new policy requiring rigorous background checks for reporters that would have blocked Stephenson due to a misdemeanor trespassing citation. Enraged, the local press refused to comply. Again, Gowan caved. Stephenson didn’t hold a grudge, telling one national reporter that he still regards Grisham as “somebody you could have a drink with.”

Grisham eventually took an unpaid leave of absence to serve as a press wrangler for Trump’s campaign. Stephenson later reported that after Trump’s November 2016 victory, Grisham, with Gowan’s blessing, received eight weeks of her state salary while serving the president-elect. Cost to taxpayers: $19,000.

It’s tough not to admire Grisham’s moxie. In 2015, when she began to work for Trump’s nascent campaign, pundits saw the uber-rich reality star as a hapless buffoon sure to flame out. Grisham bet the long odds and won. She started out as a deputy press secretary. In March 2017, she transitioned to spox for first lady Melania Trump in the White House’s East Wing. It could have become Grisham’s Siberia.

Instead, she impressed Trump with her lioness-like defense of Melania, and her ability to garner good relations with a hostile press corps. Trump rewarded Grisham by appointing her press secretary and White House communications director, with broad responsibility for coordinating overall messaging.

Her embrace of Trump’s scorched earth tactics is viewed without surprise by Chandler attorney Tom Ryan, who crossed swords with Grisham while representing a whistleblower in the Horne matter. “That’s exactly why guys like Horne, Gowan and Trump hire her,” Ryan says. “She’s a brass-knuckles brawler. Her shoving aside of the North Korean security guards [in an incident last summer] is totally in line with who she is.”

Grisham has served America’s House of Lannister longer than most, but can she survive in her current role as Trump heads into the whirlwind of impeachment proceedings and an uncertain reelection effort? Recent history is not on her side. A Brookings Institute analysis found that Trump had a turnover rate among top staff of 80 percent through November 22, higher than the five presidents before Trump.

Moreover, Grisham comes off as slightly stiff and uncomfortable on camera, which may be why the White House recently brought on former Florida Attorney General Pam Bondi to help with the administration’s response to the impeachment. Bondi’s appearances on Fox seem far more natural than Grisham’s.

Grisham flourishes behind the scenes. If she’s allowed to remain there, she may enjoy a longer run than most. Still, she should probably brush up on her two-step, in case her post-Trump career involves tripping the light fantastic for a buck à la Sean Spicer on Dancing with the Stars.