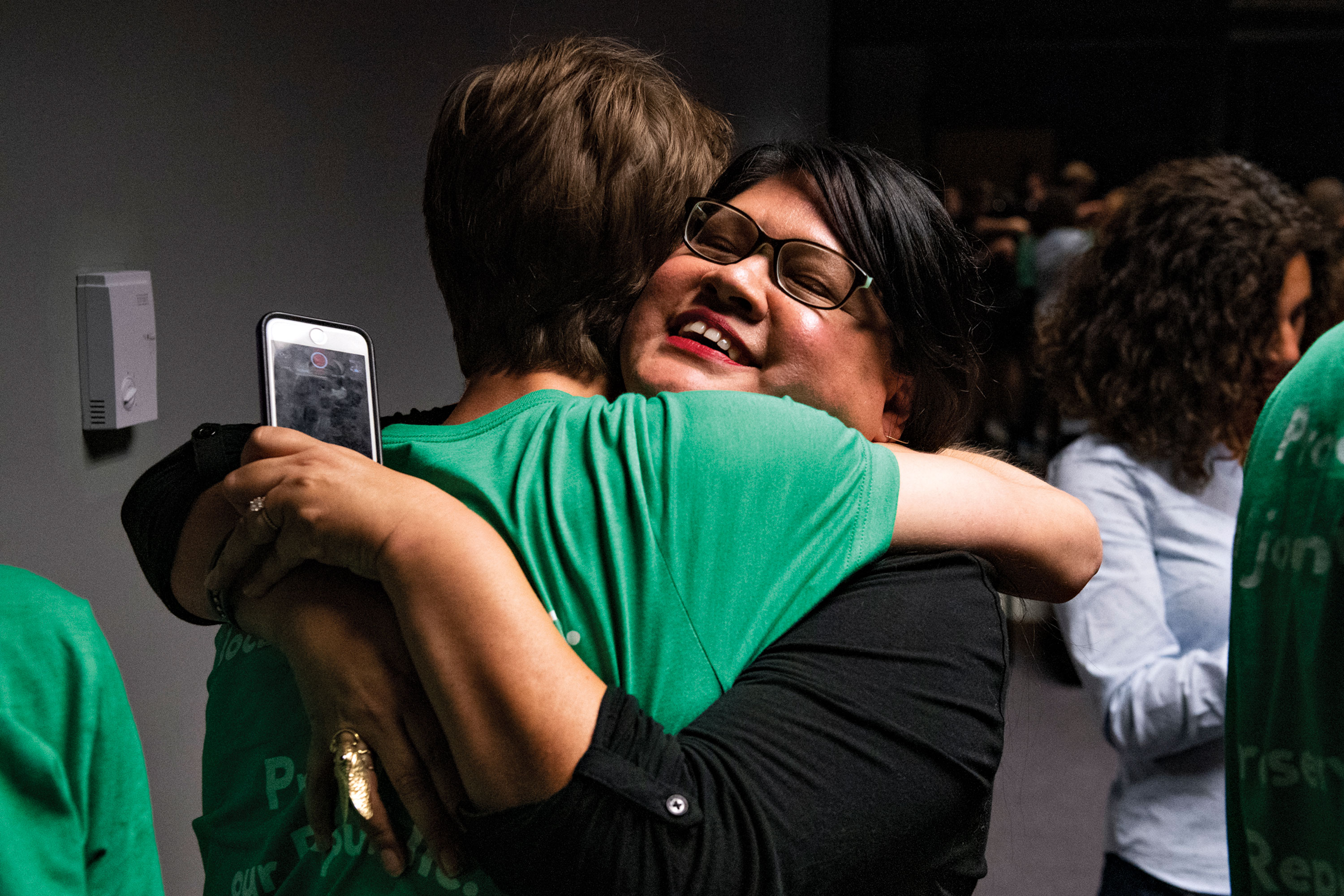 Scenes from the night of the unionization vote on October 10; Photos by Ben Moffat

The vote to go union split The Arizona Republic’s editorial staff – but offers reassurance to layoff-weary journalists as the company merges into the nation’s largest newspaper conglomerate.

Craig Harris can’t help but balk when he learns he’s the last The Arizona Republic writer to be interviewed for this article.

“What kind of a reporter waits until a story is in the final editing phase before getting the other side of a story?” scolds the award-winning investigative reporter and 25-year Republic veteran, before amicably apologizing for his “cranky” mood.

At the next desk over sits consumer protection reporter Rebekah L. Sanders, a 12-year veteran at the paper who recently led a successful and highly celebrated drive among staffers to form a union, making the Republic the first Gannett-owned newspaper to unionize while under the company’s ownership.

On October 10, The Arizona Republic’s reporters, photographers and other editorial staff members voted 64-30 in favor of joining The NewsGuild-CWA, the nation’s largest union for media professionals, which also includes staffers for The New York Times, Los Angeles Times, The New Yorker and the Thomson Reuters group.

Sanders was interviewed for this piece the day after the vote, but messages shortly after Harris concludes his phone interview – adding, professorially, “I’m sure you would not put something in this story that someone can’t provide evidence for.” (Later she reveals her source: “Craig makes it a point to speak loudly whenever he’s saying negative things about the union.”) 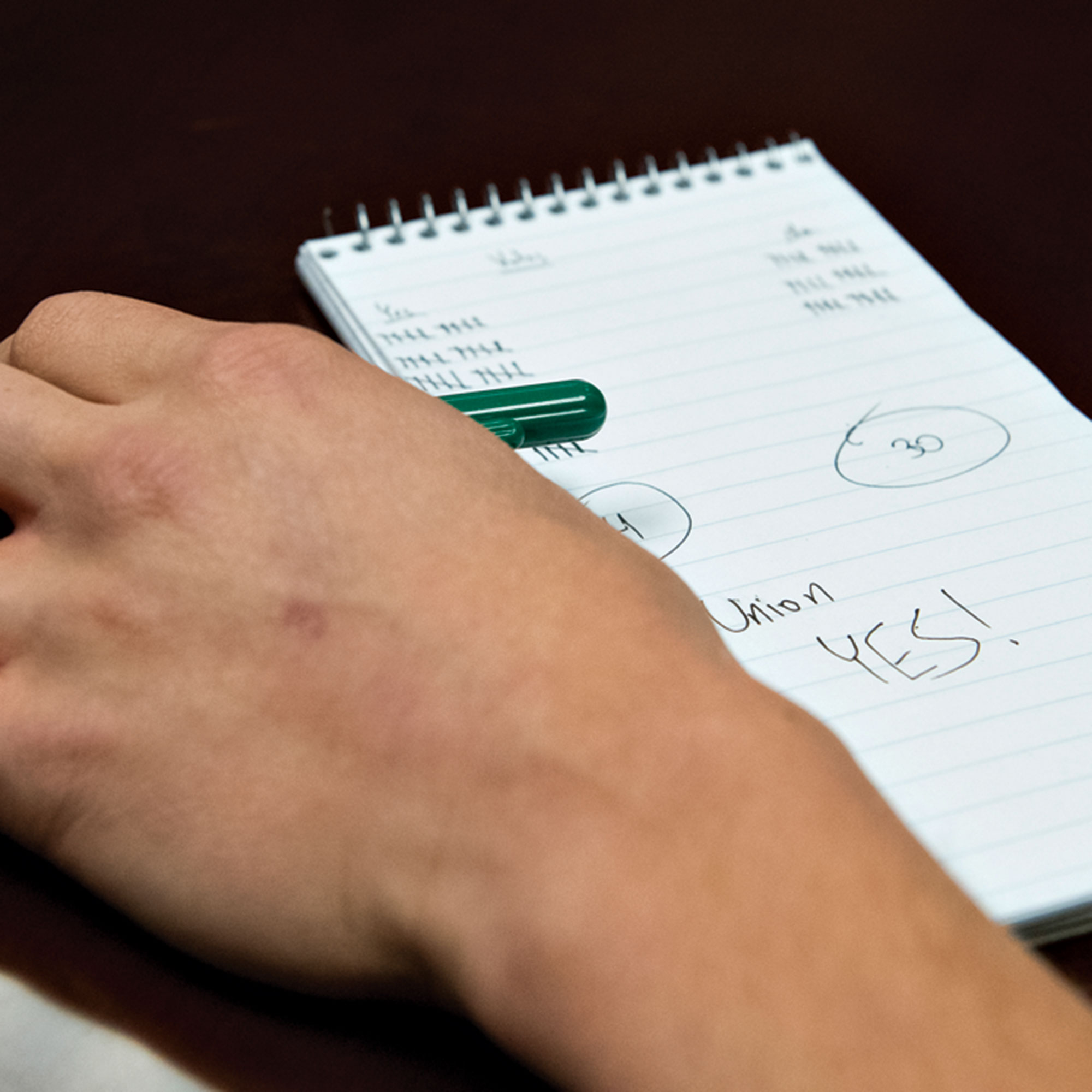 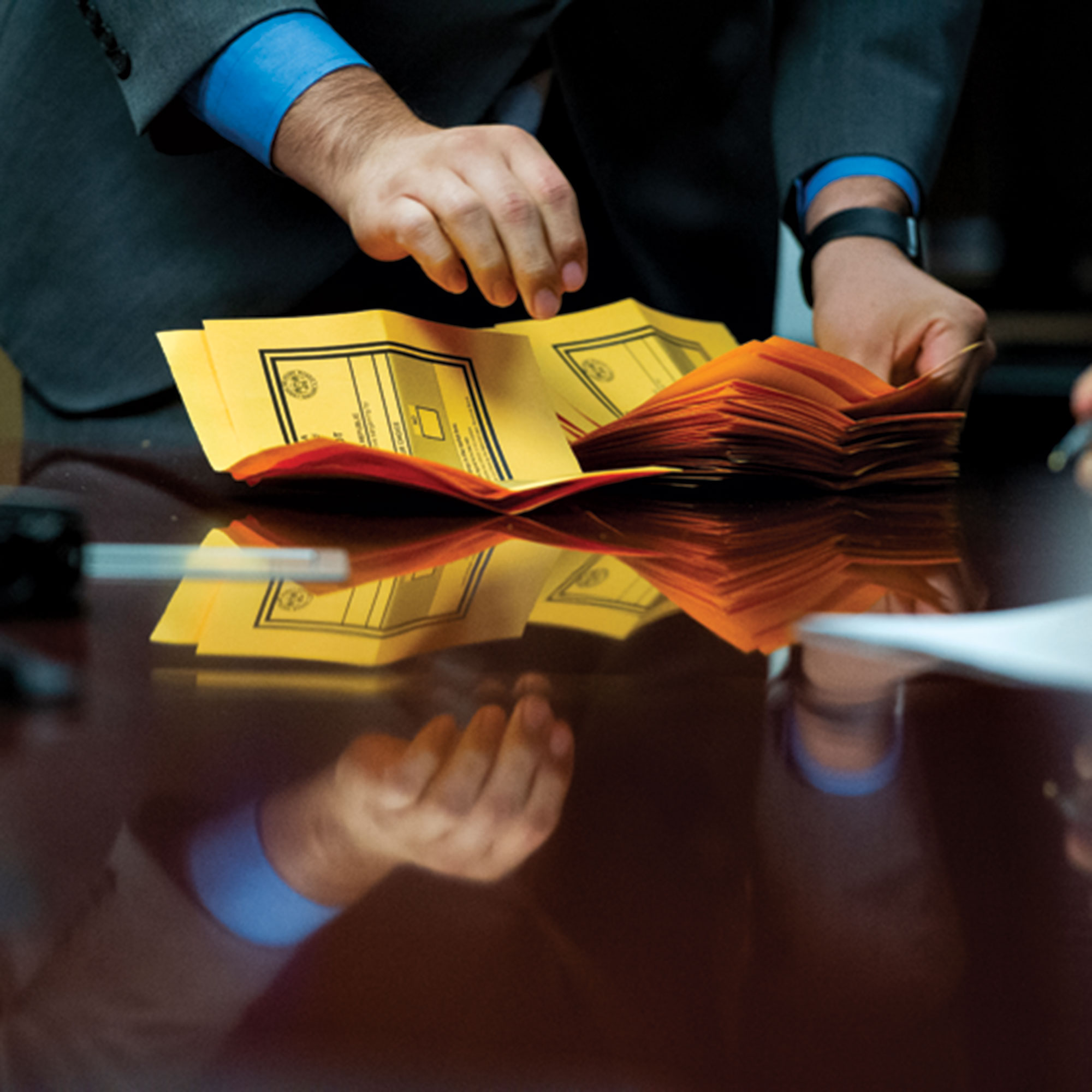 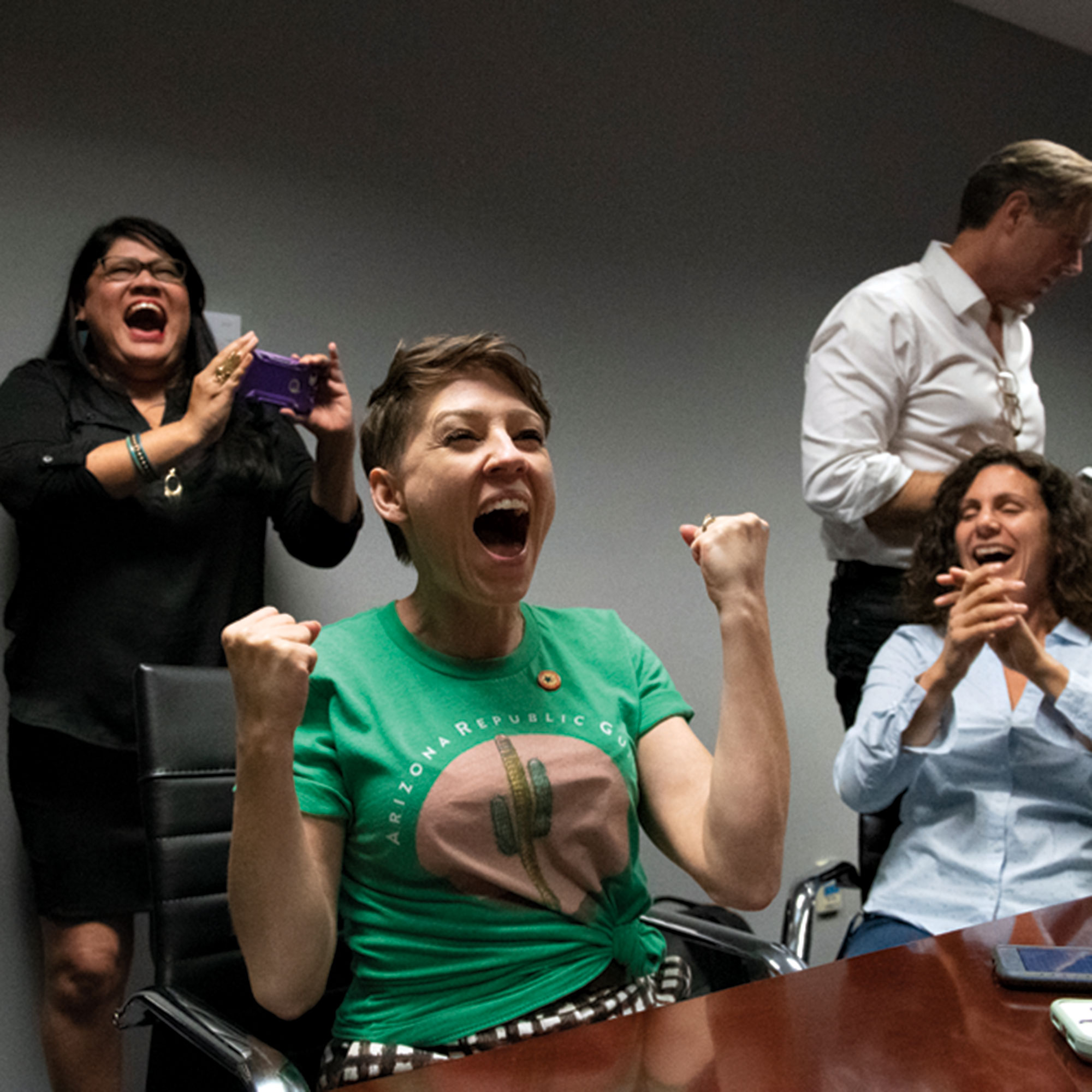 For at least half of 2019, these two desk mates have been on opposing sides of what Republic executive editor Greg Burton called the “divisive unionization effort,” a drive that not only pitted factions of the 101-member editorial staff against one another on the decision to unionize, but also turned the journalists’ well-honed investigating skills on each other as political opponents.

Burton fanned the flames himself in an August 29 email sent out to the newsroom staff. In it, he warned that “several employees, in pursuit of their goal of unionizing our newsroom, are tracking the comings and goings of a number of their co-workers.” Burton compared their recruiting methods to the harassment tactics used by “political haymakers and troublemakers, of operatives and would-be intimidators, of crackpots and criminals,” and chided, “journalists don’t surveil other journalists.”

“There were a group of folks who used an app called Signal,” Harris explains, referring to an open-source private instant messaging platform. “And essentially, they used it to kind of gossip about other employees and keep track of who they were talking to in an effort to make sure no one got flipped by the other side. And it was really, in my opinion, sophomoric and hurtful.”

Harris cites as an example the pro-union team’s tallying of how many coffee breaks he took, to which Sanders later responds, “We were talking about him taking people out to coffee to convince them to oppose the union, which was totally his right. But it was important for us to note who he was taking out to coffee so that we could follow up with them.”

As retaliation, the anti-union team – which included management – pressured organizers to halt the private messages, which in Sanders’ case included confiscating her work cellphone. “We knew that there was going to be pushback, but we did not realize that this was going to be the most aggressive union-busting campaign in recent media history,” she says. “It really was a David and Goliath fight: 25 volunteers on the organizing committee against a billion-dollar company with all the resources in the world to fight this.”

Sanders, captured in Instagram photos celebrating the voting night win with an ebullient smile and pro-union green T-shirt, has become the Fourth Estate’s Norma Rae, standing up on the Starbucks tables of working journalists everywhere. Fernanda Santos, former Phoenix bureau chief for The New York Times and current journalism instructor at the Walter Cronkite School of Journalism and Mass Communication at Arizona State University, retweeted Sanders’ social media statement after her phone was seized, cheering “More power to you, Rebekah, and to all the journalists fighting for the future of The Arizona Republic.”

“I have a sign on my house that says, ‘Protect local journalism. Preserve our Republic,’” Santos says. “My support and solidarity with them just comes from the fact of having been a journalist who benefited from having worked in a newsroom that had a union,” she says, referring also to NewsGuild-CWA, which covered her while at the Times.

Driving the push for unionization were real bipartisan concerns about the upcoming merger of the Republic’s parent company, Gannett, which also owns the USA Today network, with GateHouse Media, a consortium that already publishes 154 daily newspapers in 39 states. The deal, estimated to be worth $1.4 billion, will make the Republic part of the largest newspaper conglomerate in the U.S., but will also likely result in more layoffs – one thing the paper’s editorial staff, which has seen more than 70 percent of its roster cut since 2007, has come to fear. Gannett’s and GateHouse’s CEOs have already promised investors that combining operations should cut annual costs by approximately $300 million.

“Previously, you could learn that you lost your job that morning and be out by that afternoon, and they could give you as much or as little severance as they wanted to,” Sanders says. “From now on, if the company wants to lay people off, they will have to come to us and we can bargain for more generous severances, the ability for people to be on a rehiring list and so on. This gives us all kinds of ways to make the layoffs less painful for everybody and give anyone who loses their job a longer runway so that they can find another job somewhere else.”

For the record, Harris says he admires Sanders and her team for what they achieved. “They did something that was pretty daunting, to organize a union at a newspaper in a right-to-work state.” The criticisms he has are more editorial.

“A lot of the times, they really stretched the truth to make work conditions sound worse,” says Harris, who stresses he’s happy with his job. “For instance, they included a testimonial from a guy that used to work here, saying he had to decide whether or not to pay his rent because he didn’t get reimbursed for his expenses. We get our reimbursements within 48 hours.”

Harris says the team could have made their case better just sticking to the facts. “Like, our health care costs have gone up. That’s factually true. Our reimbursement for mileage is not anywhere close to the federal average. That’s a factual statement.”

Harris maintains that Sanders and company told the public a story about their own newsroom that he says wouldn’t pass muster with any of the senior editors there.

“You know, with some of the tactics that they used,” he says, “they would have never gotten this story in the publication.”

The vote by Republic staffers to form a union marks actually the second time the paper’s reporters have attempted to organize. In 1978, the editorial staffs of the Republic and its now-defunct afternoon edition, The Phoenix Gazette, voted 146-115 to form a union.

But then-owners Central Newspapers, run by the family of Midwest newspaper magnate Eugene C. Pulliam, managed to sway journalists with pay raises and perks, and a contract was never signed.

“The Pulliam family gave out a bunch of enormous raises to employees and essentially persuaded them to stop negotiating for the contract,” says reporter Rebekah L. Sanders. “We’ve learned from that, and our margin of victory this time is far higher than it was in the ’70s.”

“The end of this road,” she says, “will be securing a contract that protects and benefits everybody.”