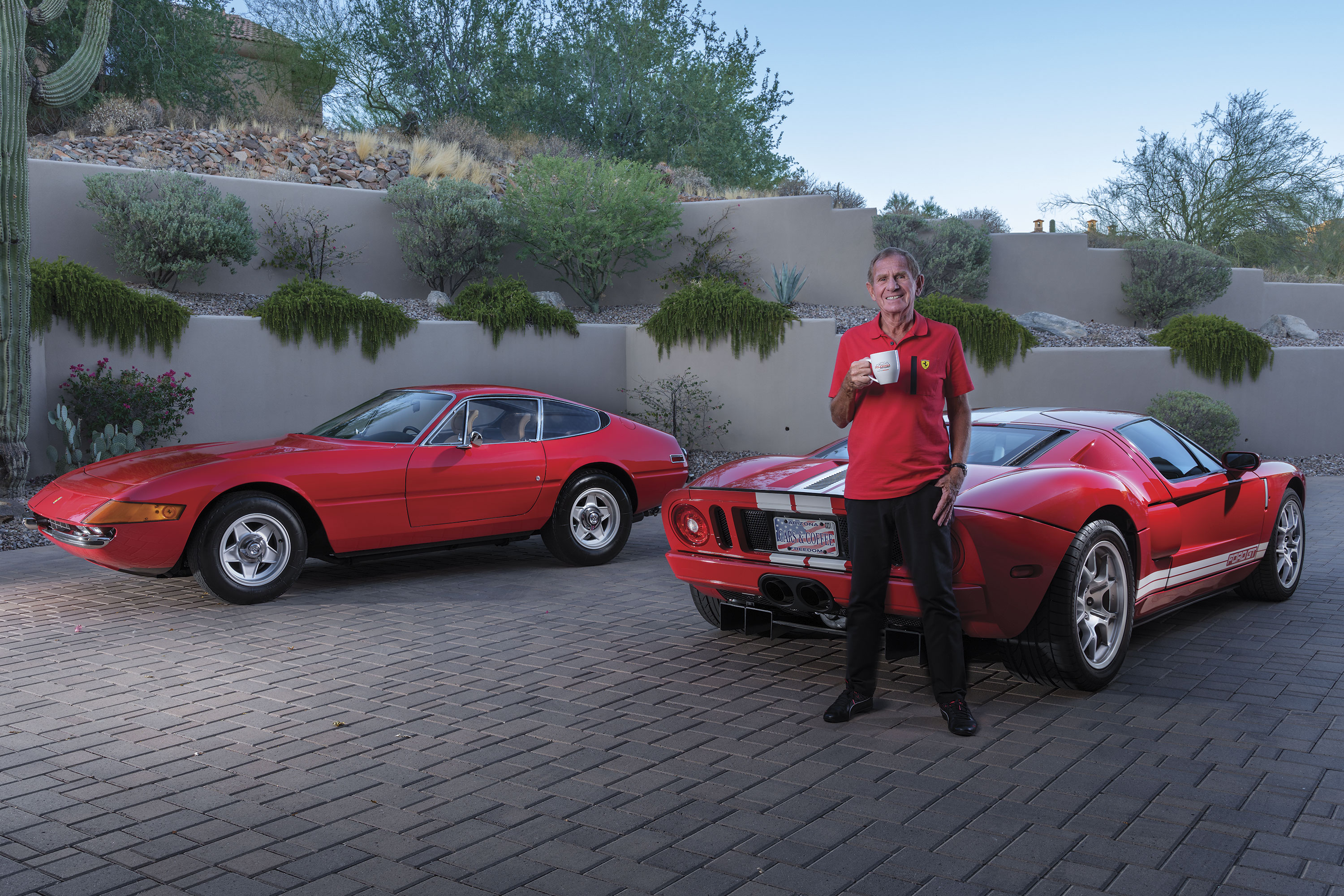 Ferrari Aficionado
On a warm September day, way up near the top of Fountain Hills, Peter Volny shows off the two cars currently in his garage: a Ford GT and a Maserati GranTurismo, both bright red. Missing is his Audi RS 7, which shines a radiant red as well. Also out right now: the crown jewel of his collection, his 1972 Ferrari Daytona. It’s red, and it’s in the shop (“at the spa, as I call it,” Volny says), getting ready for the Ferrari Club of America Annual Experience, which will be held in Scottsdale on November 6-10. Volny is the chairman of this year’s event. He’s also the founder and organizer of Concours in the Hills, a charity car show held in Fountain Hills each February.

What’s the story behind your Australian accent?

I grew up in Australia. I left 50 years ago, actually. I moved to England to race cars, and it didn’t work out… When my wife and I sold our business and retired, we could afford to live anywhere we wanted in the world. We could’ve gone back to Australia, and Australia is a fabulous country – it is fantastic. But nothing comes close to America… We’ve lived here now for 15 years, and hardly a day goes by that we don’t go, “Only in America.”

How will being in Arizona benefit the Ferrari event?

First of all, our weather. The chances of rain, particularly in November, are exceptionally slim. Cars like this, you don’t drive in the rain. We’ve got some fantastic driving roads. The Valley of the Sun, I think, probably has the greatest concentration of high-performance exotic and collector cars in the entire country. Why? A combination of the climate, and I think there’s a hell of a lot of people like me, who have sold our businesses… and we want to enjoy life. We can afford to buy these toys, and this is a great place to have them.

What’s on the itinerary?

On Thursday, we will have our concours d’elegance [judged event], which is being held at the Scottsdale Sports Complex, on Hayden Road. That event is open to the public and free of charge. For Friday and Saturday, we’ve rented a racetrack called APEX for people who want to go out and drive their car. Plus, we have drives going to Flagstaff or to Payson… people can explore the beautiful geography and geology of this area. Friday night, we’re doing a Western night at a Western venue, where we’ll have line-dancing lessons and a cowboy band and all sorts of activities. Everybody who comes will get a cowboy hat.

How will it help the Valley?

Of the 700-odd people who are coming here, I’d say about 550 are from out of state. So those people are going to see Arizona, just like I did. Some of them will fall in love – I think a lot of people who maybe have California or Florida on their radar, and maybe don’t know how fantastic this is, what a wonderful state.

And Concours in the Hills?

It’s entirely for charity: Every penny goes to Phoenix Children’s Hospital. This year we raised over $155,000 in one day. I’m a childhood-cancer survivor. I, at a very early age, developed colon cancer. I’m 73, so I’ve made it through. But as an adult, you understand these things. As a kid, you can’t. The kids, they go through chemo, they go through radiation, they lose their hair, they’re in pain. It’s horrible. I’m not a doctor – I can’t do anything about that. But what I can do: I’ve committed to raising $500,000 to build a playroom… a place that they can go to, play with toys, forget all their troubles for a couple of hours.