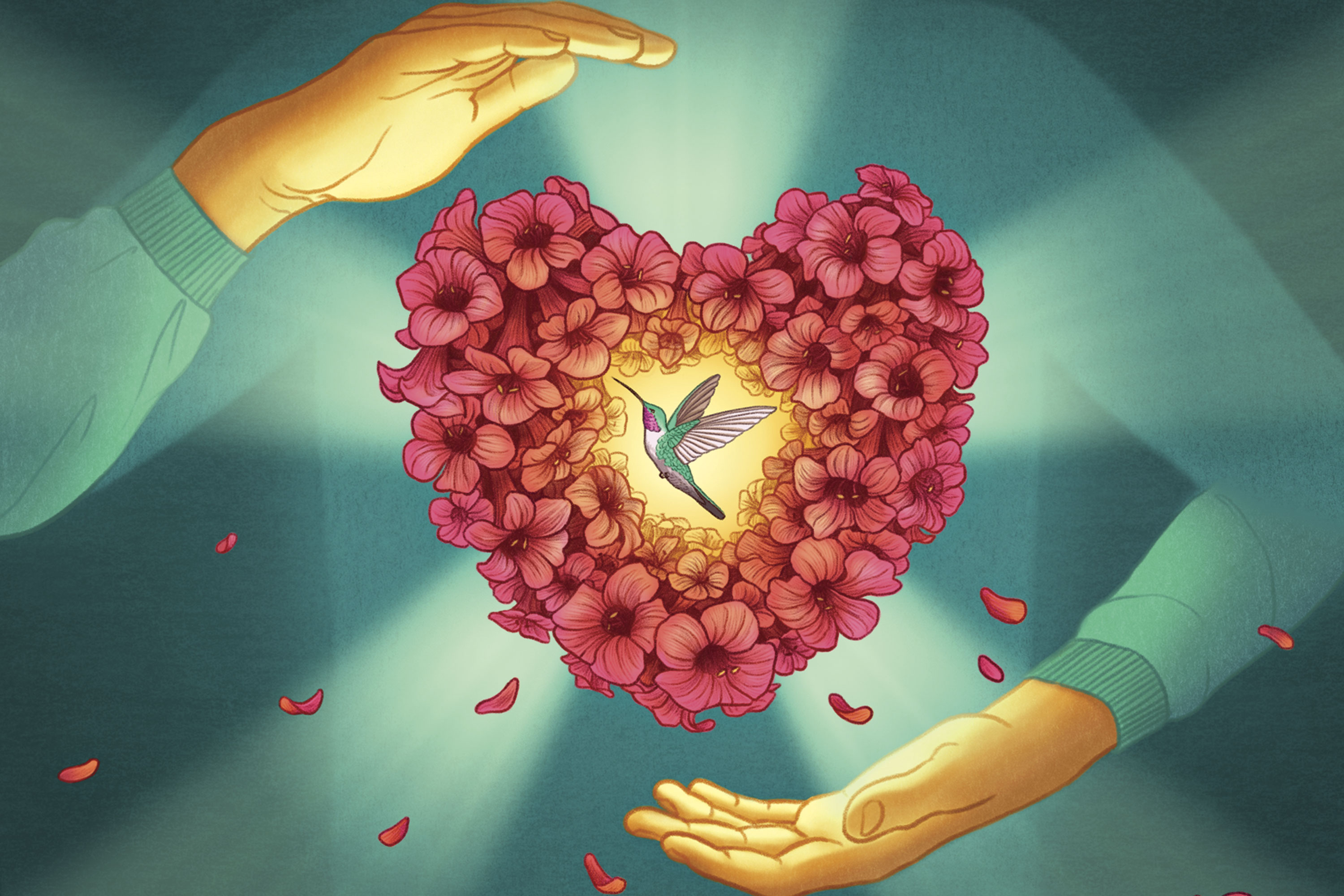 A Phoenix artist embarks on a journey of transition – and discovery.

It’s not even dark yet on the first Friday of September, and Exposed Gallery in Central Phoenix is already shoulder-to-shoulder with people nibbling cheese and looking at art.

I scan the crowd for one particular artist in this group show – this isn’t easy, since we’re both 5-foot-2 – and finally find him standing near a corner at the back of the space, casual in a collared shirt and tortoiseshell glasses, his hair dyed reddish brown and spiked with gel. For this story, he’s asked to go by his first name, Ace.

“How’s it going?” I ask after the exchange of hugs and pleasantries. “How does it feel to be sharing your work?”

“Well, I’m over here,” Ace says, gesturing all the way across the room to his contribution to the show. He looks a little nervous. We both shrug and smile, and I make my way over to look at his piece.

It’s both simple and stunning, a large self-portrait in black and white titled “Self-Preservation.”

In the portrait, Ace sits naked with crossed legs and wide eyes. His bottom half is partially hidden, but the image reveals plenty. In it, you see stretch marks, scars and hair on a slender frame. Short lines mark the spots on his abdomen where Ace’s fallopian tubes were removed in March. Not visible are the effects of small doses of testosterone that have deepened his voice. His “top surgery” scars are so new that the image in the portrait is wearing small bandages across his chest.

I first met with Ace in late July, on the day before the top surgery, the transgender community’s preferred language to describe an operation to remove or alter female breasts. He was giddy. Born and raised in Phoenix, Ace says he doesn’t recall a time when he didn’t feel like he was in the wrong body – although for a long time he didn’t have language to describe how he felt.

He always wanted a boy’s haircut and started stealing his brother’s clothes when he was 6. He called himself a tomboy. “I didn’t know the word transgender in, like, a medical sense until I was 19. I’ve always just been an androgynous, tomboyish creature, and I see tomboy as its own kind of gender for me,” he says. “My kind of androgynous island for whomever wants to join.”

Now Ace is 29 and, as he puts it, “a Thomas Man.” A full-grown tomboy. He moved away to Washington, D.C., for many years for college and work but returned recently to save money, find community and make some changes.

That hasn’t been easy. Ace was working at an after-school program for elementary school kids in D.C., then took a job in Phoenix at a funeral home. It’s fascinating work, but it doesn’t pay much, and he found himself on AHCCCS, the state’s Medicaid program. He earned less than $17,000 last year, and since AHCCCS won’t pay for top surgery, he saved his money and took donations from friends until he had a pile of bills adding up to $8,000 – the amount charged by the north Scottsdale surgeon he found on the Internet.

The doctor was supportive of Ace’s decision, Ace says, but he still had to produce a letter from another doctor confirming he was of sound mind. If he’d gone through an insurance company, he mostly likely would have been required to undergo several counseling sessions. He doesn’t like that at all. “To be told that I need to go to therapy in order to get medical care because of my gender, it makes me feel like I’m defective or an addict or not aware of how much I need help and intervention. That’s just not true,” he says.

That’s a controversial topic, even within the transgender community. I spoke with both national and local experts who confirmed that while the World Professional Association for Transgender Health currently recommends counseling before top or bottom surgery, those guidelines are under review and might soon change.

Not soon enough for Ace.

“Keep in mind, when you go into a Scottsdale plastic surgeon’s office, you can get them put out to here,” he says, drawing huge imaginary breasts in the air over his chest. A few days before the show at Exposed Gallery, Ace and I had coffee again. The surgery was easy. He was off pain meds in two days and walked around for a while “like a T-Rex,” unable to lift his arms, but healed quickly and is already back at work.

Ace loves not having to bind his chest anymore, he says. And there have been some surprises. “The first time I got the major bandages off, I was falling asleep, and I had my hand on my chest like this,” he says, placing his hand over his heart. “And I was like, ‘Am I OK? Am I having a panic attack?’”

His heart felt like a hummingbird in his chest.

Turns out, he was just fine. “My heartbeat is so close now, my heartbeat is right here,” Ace says, putting his hand over his heart again. “I was feeling my own heartbeat in a way I hadn’t before.”